23 April.  From Boumalne we continued west to Ouarzazate seeing a Houbara Bustard and five species of wheatears, including our first Mournings, but otherwise it was a quiet day.  Being surrounded by a crowd of kids whenever we stopped for petrol took a bit of getting used to especially when hands and arms came through the smallest gaps in the windows.
24 April.  Camping near to the town the crowd of onlookers as we packed up our tents came as no surprise but was somewhat disconcerting.  I was concerned about having my binoculars stolen and only took them off once (inadvertently) during the trip.  I even slept with them on which wasn’t always comfortable but was certainly paranoid!  We slowly drove to Aoulouz where we saw 4 Bald Ibis with one large youngster at a breeding site on the cliffs.  As we continued on to Taroudant I counted 23 Great Grey Shrikes spaced along the telephone wires by the road.  We saw our first Black-headed Bush Shrike in roadside scrub and heard a Red-necked Nightjar at dusk.
25 April.  We camped near Taroudant and looking around the area in the morning Chris flushed a Red-necked Nightjar which we were all fortunate to see quite well.  We drove slowly towards Tifnit seeing two Black-shouldered Kites and three Moussier’s Redstarts by the road.  Twenty-two Bald Ibis were feeding in fields near Tifnit and in fading light a look at nearby Oued Messa on the Atlantic Coast produced a range of wetland birds including Marbled Teal and a flock of eleven Fulvous Whistling Duck, a new bird for the Western Palaearctic. 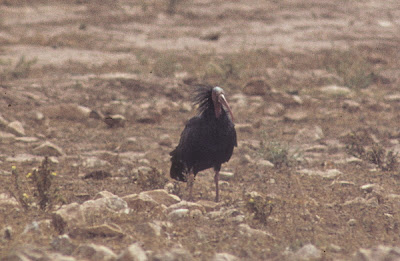 26 April.  We spent all morning at Oued Messa where there had been a fall of migrants.  Flycatchers were most evident with 80 Pied and 100 Spotted seen along with 500 flava Wagtails, 10 Nightingales and a good selection of warblers and chats.  The Fulvous Whistling Duck were still at Oued Messa while flocks of Black-bellied Sandgrouse flew in to drink.  We also saw 32 Bald Ibis and a Baillon’s Crake (another new bird for me) before returning to Tifnit.  Here 3 Bald Ibis, 3 Cream Coloured Courses and 3 Moussier’s Redstarts were completely outnumbered by 200 Spotted and 30 Pied Flycatchers.  We finished the day further up the coast at Oued Sous where an Audouin’s Gull (also new for me) and a good selection of terns and waders were seen.


27 April.  The morning at Oued Sous was something of an anticlimax with 500 Swifts flying north the only evidence of migration.  We continued up the coast to Essouria where two Eleanora’s Falcons were seen at Diabat.  From there we headed for Marakesh and Imlil.
28 April.  We had a day in the Atlas Mountains heading from Imlil to Oukaimeden.  The weather was poor and time was not on our side so we didn’t follow up a calling levaillanti Green Woodpecker on the way up, only later was it regarded as a different species.  At Oukaimeden we saw breeding Shore Larks, 10 Crimson-winged Finches, seebholmi Wheatears and both species of Chough before the weather closed in completely and we descended and started the long drive back north.
29 April.  We drove steadily north from Mechra-Benabbou to Mohammedia and finally Mehdia where at dusk we saw two African Marsh Owls.
30 April.  We drove from Mehdia to Merdia Lerga with a brief stop in the Foret de la Marmora where we saw 6 Golden Orioles and a Pied and two Spotted Flycatchers.  Six Montagu’s Harriers and 150 Collared Pratincoles were the best sightings at Merdia Lergia and we continued on to Pont Mohammed.

1 May.  We drove to Ceuta and crossed back into Spain seeing 7 Puffins on the crossing.  We returned along the coast to Malaga.  It was a most enjoyable trip to a very spectacular country and I saw just under 50 new birds.  We found the locals a bit trying at times although they probably thought the same of us.  Many thanks to all my companions, but particularly Pete Naylor, for making it such a memorable and successful trip.  I'll always remember it fondly as the first time I'd been outside Europe.  It cost me just £130 in total and I saw 215 species of which 46 were new.  £3 per new bird, those were the days!

Pete Naylor’s untimely death on Christmas Eve 2012, far too young at just 62, got me thinking of the good times I’d had with him over the years.  In the mid 1970s and early 1980s we were part of a group of friends doing regular weekend trips to Norfolk or twitching and holidays on Scillies, Fair Isle or abroad.  Pete was a very careful and competent birder brought up with the discipline of watching at Perry Oaks and Staines Reservoir (where birds usually had to be identified at great range).  He was highly reliable, completely unflappable and with a wry sense of humour which made him excellent to have on any trip.  These postings of a Morocco trip we were both on in 1977 are dedicated to his memory.  As usual they are based on note book entries that I wish had been more detailed, scanned slides of variable quality and my unreliable recollections.


In May 1975 I’d been one of a group of friends who had visited the Camargue and Pyrenees in a minibus, my main contribution being keeping whoever was driving awake and finding a Wallcreeper in the Pyrennes.  The trip went very well (50 new birds for me including said Wallcreeper, then my most wanted bird) and we were keen to follow it up with something a bit more adventurous.  We didn’t get anything off the ground in 1976 but a trip to Morocco became a firm possibility for 1977.  Other friends were interested and in the event ten of us went - four from around London (Richard Bosanquet, Andrew Moon, Pete Naylor and Nigel Redman), four from Liverpool (Geoff Bond, Pete Campbell, Ken Dummigan and Chris Murphy), Dave Norman from Devon and myself (working as an accountant in Hove - that didn't last ...).  We flew to Malaga on the morning of 18 April 1977 and hired two small Seats for a fortnight (5 plus luggage,including tents, in each was quite a squash).  We drove to Tarifa where we got a ferry across the Straits of Gibraltar to Ceuta.  Limited roadside birding in Southern Spain produced two new birds (Spotless Starling and Pallid Swift), Bee-eaters and Egyptian Vulture.  Two Puffins and a Bonxie were seen on the crossing and roadside stops as we drove south in Morocco added Barbary Partridge and a selection of waterbirds.  We camped in the Rif.

19 April. We drove to Fez seeing our first Bulbuls and two Rufous Bush Robins en route.  Fez was very busy with hundreds of Alpine Swifts flying around the old city walls although 20 Little Swifts were another new bird.  After buying some provisions (we seemed to live mainly on bread and lemonade) we continued south to Dayet Aoua (a single Crested Coot and 12 Hawfinches), Annoceur (Long-legged Buzzard and 50 Black-necked Grebes) and Foum Kheneg Gorge (Roller, Black Wheatear and 3 Blue Rock Thrushes).  We camped at Midelt, south of Zeida.

20 April.  Up at dawn and soon chasing after Dupont’s Lark of which about ten were singing in the area although it took a while to track one down.  Other birds here included 25 Lesser Short-toed Larks, 10 male Desert Wheatears and best of all 3 Cream Coloured Coursers.  We continued south along the plain towards the edge of the Atlas mountains seeing 3 Black-bellied Sandgrouse and more wheatears.  We entered more hilly country where I was delighted to see 7 Moussier’s Redstarts and 6 Tristam’s and an Orphean Warbler while the drive south to the edge of the desert at Ksar-es-souk added Desert Lark, House Bunting and Fulvous Babbler.

21 April.  We camped at Source-bleue de Meski, which in daylight was a lush oasis with migrants including Redstart, 12 Bonelli’s and a Wood Warbler and Pied Flycatcher.  Not being able to get our 2WD any further into the desert we headed west, seeing 6 Blue-cheeked Bee-eaters and our first (of many) White-crowned Black Wheatears on the way to Rissani. 4 more Blue-cheeked Bee-eaters on the way to Gfifate where we added Bar-tailed Desert and Hoopoe Larks, Scrub and a rather lost looking Wood Warbler and 20 Trumpeter Finches.  We finished the day driving to Mellab with another 10 Blue-cheeked Bee-eaters and more Bar-tailed Desert and Hoopoe Larks with one of the latter performing song flights in response to a poor tape recording.
22 April.  We drove slowly westwards to the Gorge du Todra, where a pair of Crimson-winged Finches were found, and turned south down the Tagdilt Track near Boumalne.  This area was good for Red-rumped Wheatears, Temminck’s Horned and the very impressive Thick-billed Larks and more coursers.  We would stop the car in the desert seemingly in the middle of nowhere but soon people would appear and start walking towards us, eventually to stop and stare.  More scary was to return to the cars and find hand prints on the windows when we’d seen no one and had hardly been out of sight of them.