Sunday 28th.  Frank Lambert, a good friend of more years than we cared to remember, was visiting his mum in Brighton for a few days on his way back to KL and we had a morning at Pagham.  Between being gripped off by some of his recent travels (450 new birds in 3.5 months in Mexico, Colorado, California and Alaska) and forthcoming tours (PNG, Australia, Sumatra, India) we saw a few birds!  The Hudsonian Whimbrel eventually gave reasonable views while Sidlesham Ferry was nice with a brownish summer-plumaged Spotted Redshank, 2 Little Ringed Plovers, 23 Avocets (8 juveniles) and 104 Black-tailed Godwits.  A superb Barn Owl flew across near the Long Pool, a Med Gull, an unreadable North Thames colour-ringed Herring Gull and a Little Tern were in the harbour and a Sand Martin flying around Church Norton was only my third this year!  Late afternoon, at low tide, Megan and I walked around the Adur where 2 Common Sandpipers were unexpected. 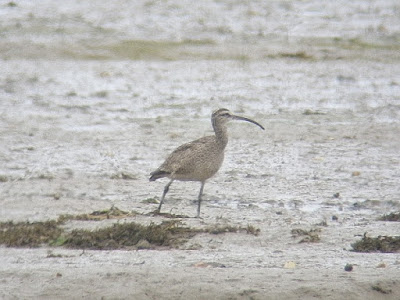 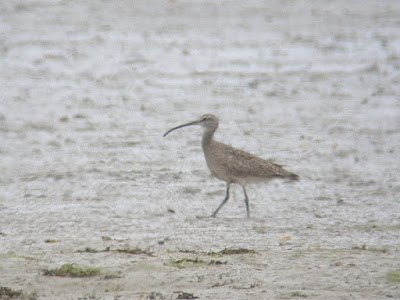 Saturday 27th.  A low tide visit to the Adur produced just one Little Egret and a Sussex colour-ringed Herring Gull that flew before I could read it.  Eight Swifts were over our house in the evening.

Friday 26th.  A Peregrine was on Southwick Power Station chimney and a Sandwich Tern offshore. 16 Swifts were over our house in the evening.

Thursday 25th.  An evening visit to Pulborough produced 5 Little Ringed Plovers, 3 Green Sandpipers and 81 Lapwing were on the North Brooks and 2 Nightjars on Wiggonholt Common.

Wednesday 24th.  Megan and I walked up from High Trees to Truleigh Hill.  Several Sky Larks and a Corn Bunting were singing and 15 Swifts and 2 Ravens flew over.


Posted by richard fairbank at 20:01 No comments:

Usually when I get in from work I put my phone and pager on the side and settle down to do whatever.  Monday was no exception and it wasn't until I was going to bed after 23:00 that I thought to check them.  Thee and earlier 10 Bee-eaters near Glynde on the pager and a missed call and text from Jake (thanks for trying, much appreciated).  Oh no, what an idiot, why have a pager if you are not going to look at it!!  I didn't sleep well, woke at 03:00 was still awake at 04:00 so got up and went. I arrived at Little Dene at 04:50 not exactly sure where to go but was returning from my first wander around when I noticed four sitting on wires at 05:00.  From then until about 06:15 at least eight were roosting in a large tree, at times quite vocal, making occasional sallies and catching bees with an apparent ease.  A little later they started flying west across the open field to settle on wires and we counted nine and then on two occasions ten.  At 06:34 they all flew up, first nine then the tenth, gaining hight and disappearing very high against the sun to the northeast.  A fantastic experience for the ten birders who witnessed it, our sympathies lie with Alan Kitson who arrived 10 minutes too late. 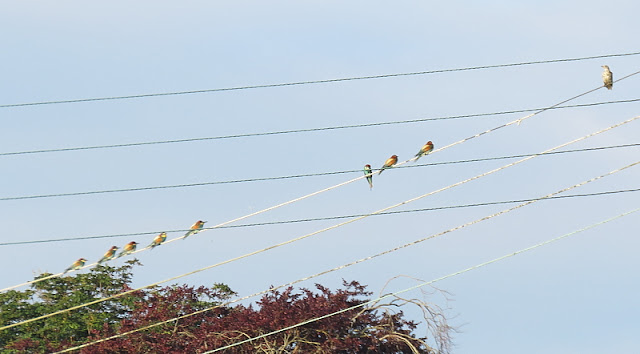 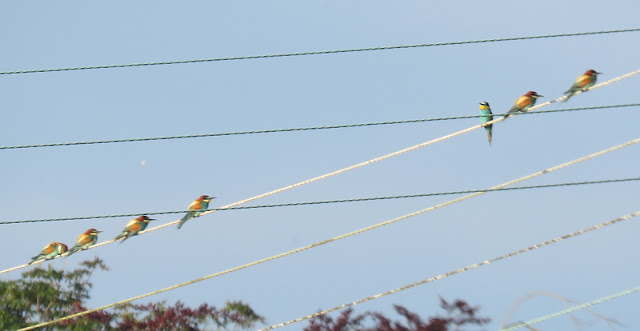 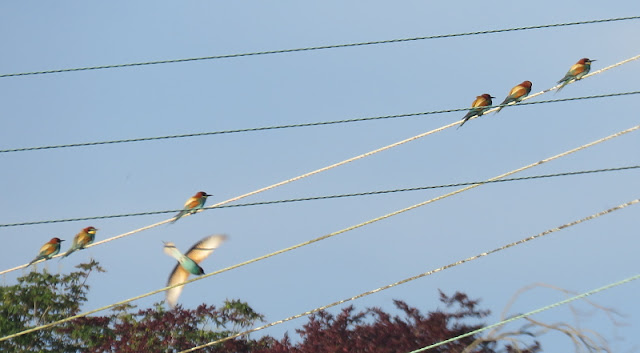 Posted by richard fairbank at 20:10 No comments:

very quiet in Sussex, and then a Terek is found ...

Sunday 21st.  A circular walk over Graffham and Duncton Downs with Megan went through some excellent looking woodland and gave some excellent views but was almost birdless with a distant Red Kite, 2 Buzzards and Nuthatch and Yellowhammer heard my only notebook entries.  Traditionally a very quiet time of year and I had not taken my pager so a message about a Terek Sandpiper at Pagham when I got home was quite a surprise.  It was not somewhere I could get to before the tide came in and possibly push it off, and then here were then the Grand Prix highlights on TV ... In the event I didn't leave home until 18:30 but at least there wasn't much traffic on the road, or parking problems at Church Norton.  Only four birders were present when I arrived.  One of them was Jake Everitt who kindly pointed the bird out to me.  Rather distant but OK through a telescope, until it flew out of sight along the main creek.  By now our numbers had grown with the arrival of Lee Evans, closely followed by Dick Filby making it feel like a 1980s twitch.  Dick and I walked to the beach where Dick picked up theTerek at the end of a distant spit, even further away but somewhat atmospheric with Chichester Cathedral in the background.  I had a very distant view of what looked like the Hudsonian Whimbrel and there were 13 Avocets on Sidlesham Ferry where a Cuckoo flew over while I was looking at them. 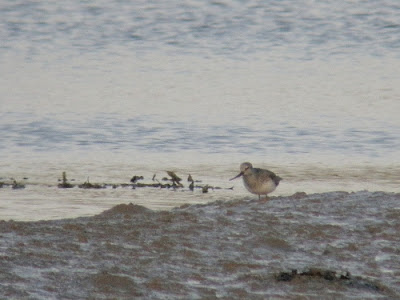 Saturday 20th.  A Greenshank was the high light of a low-tide visit to the Adur where a Sandwich Tern and a North Thames Herring Gull was also present - my best visit for ages. Nine Reed Warblers were along the ditch between the river and airport and at least 20 House Martins over Lancing College.

Thursday 18th.  A nice morning for my late South Downs farmland bird survey to the west of the Burgh.  A nice looking area although most of the tracks on my route had hedges planted along them and these have grown up making it hard to see much of the downland where there are no gates. This doesn't present a difficulty seeing Red Kites which were often overhead with at least 4 seen.  It is now vying with Buzzard as the commonest raptor here (I saw at least 4 of each ad a single Kestrel).  Other highlights were two Grey Partridge families, both with nine chicks, two Cuckoos, two Ravens and a male Yellowhammer.  Only one Corn Bunting was seen, after I had finished the survey, and no Meadow Pipits or Lapwing. 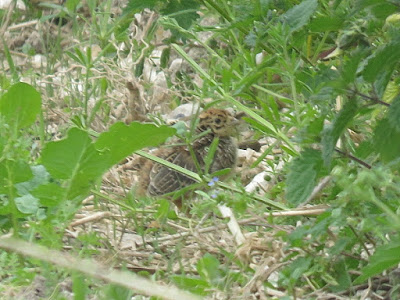 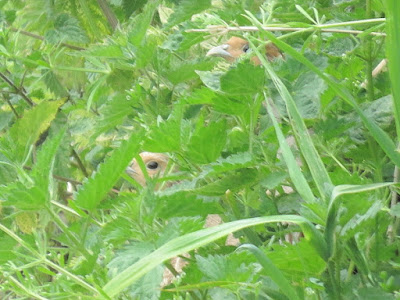 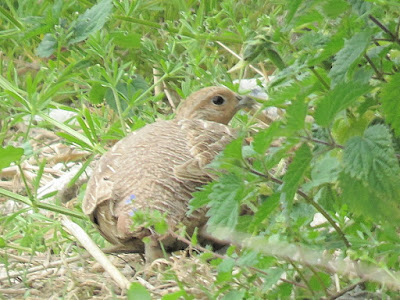 Wednesday 17th.  Megan and I walked up Wolstonbury Hill.  Superb views from the top and a few orchids on the way.  In the evening I called in at Pulborough seeing a male Wigeon, Little Ringed Plover, 38 Lapwings and an adult Nightingale feeding a speckled juvenile.  Three Nightjars were seen at Lavington Common where a Hobby flew over and two or three Woodcock were roding.
Tuesday 16th.  Twelve Swifts over the house in the evening.
Posted by richard fairbank at 23:04 No comments:

I was keen to get some images of the Hudsonian Whimbrel and made a third visit to Pagham, this time with John King.  We started at Siddlesham Ferry seeing 7 Avocets, 2 Little Ringed Plovers and 2 Green Sandpipers and quickly continued to Church Norton. The Hudsonian Whimbrel was on the mutflats just north of the hide when we arrived at about 06:50 and giving good views, although against the rising sun to varying degrees.  We watched it feeding on crabs for just over an hour, its success somewhat explaining its long periods of inactivity on my previous visit.  We decided to head into Hampshire to look for the Greater Yellowlegs at Titchfield which seemed more regular in its appearances in recent days.  On the way news came through that it was on the reserve by the beach road so we made for there and joined a small crowd of admirers as it was as close as it was possible to be.  We had excellent views for 10-15 minutes until something spooked the Black-tailed Godwits it was with and they all flew off north, appearing to land on the reserve.  We also saw a Water Rail although not a patch on yesterday's views.  With negative news of the New Forest Black-eared Wheatear (it hadn't been convenient to go the previous afternoon) we decided to quit while ahead and came home via Thorney seeing a Greenshank, 4 Mediterranean Gulls and a Little Tern. 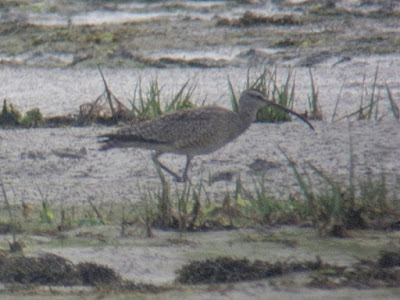 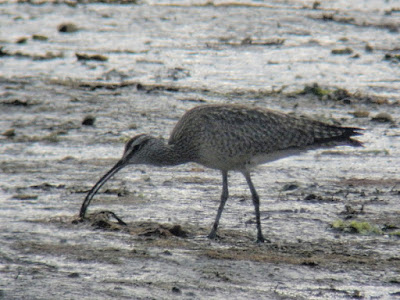 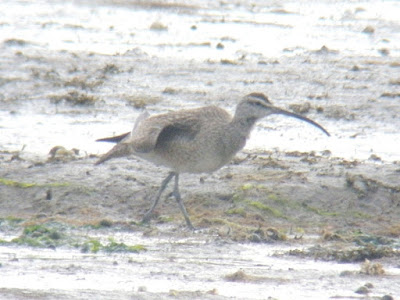 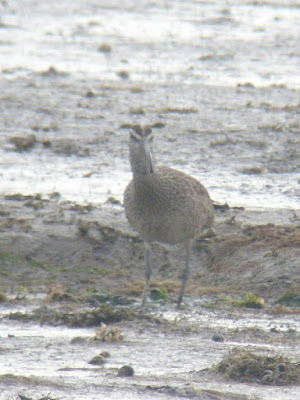 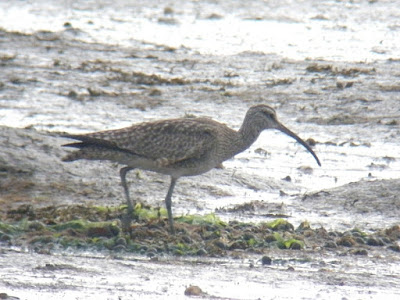 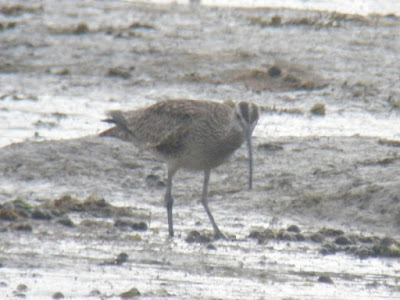 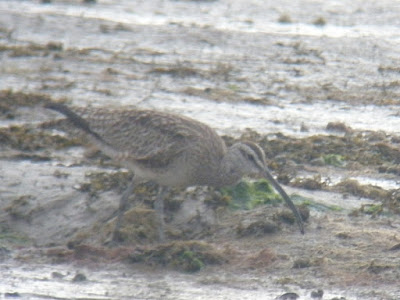 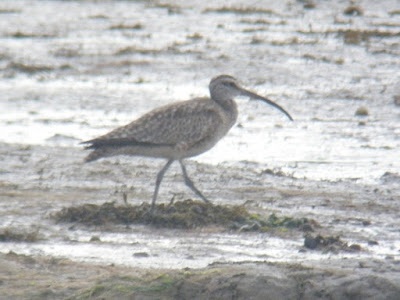 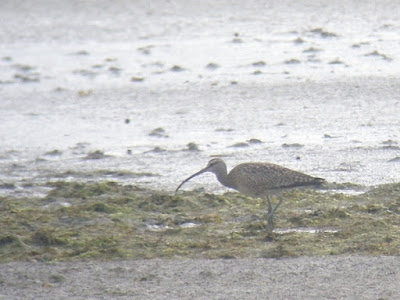 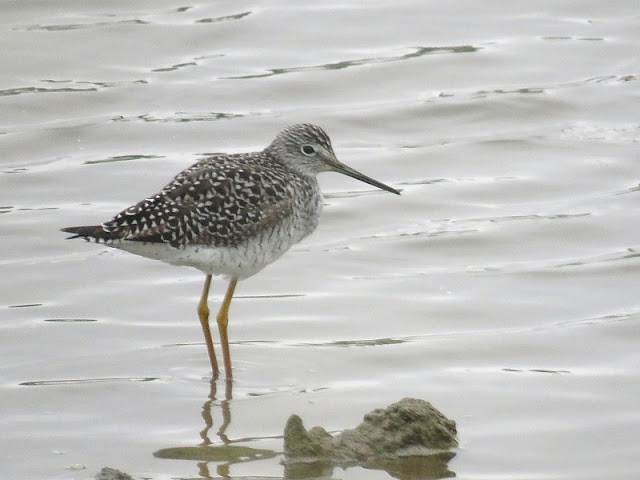 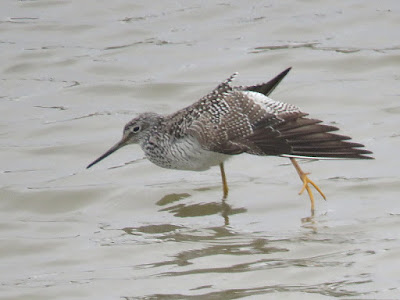 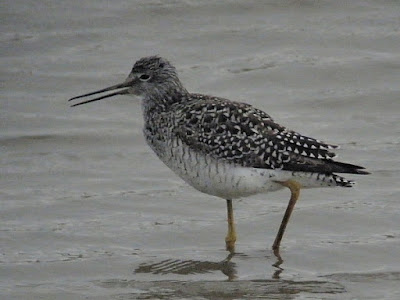 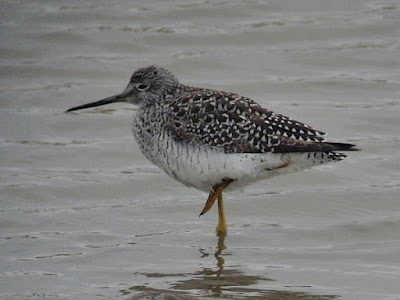 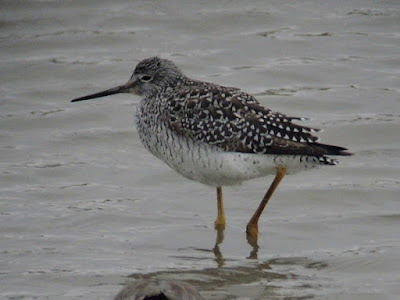 Posted by richard fairbank at 20:03 No comments: