18th August.  We returned the car having done 820 kms in 3 days and caught the morning flight to Ushuaia.  Here it was very much colder, rarely getting above freezing, and there was a lot of snow around.  We picked up the car we’d pre-booked in Salta and hoped the roads would be clear to enable us to get out of town and to the National Park.  Not having an unlimited km deal wasn’t looking as if it would be a big problem in this weather.  We drove into Park National Tierra del Fuego without too much trouble, arriving with an hour of so of light, we were down to 9 hours of mid-winter daylight.  We camped in snow in the National Park with Mike again opting to sleep in the car.  Birds seen included Kelp Goose, Flightless and Flying Steamer Ducks, White-throated Caracara, Dolphin Gull, Dark-bellied Cinclodes, Thorn-tailed Rayadito, Fire-eyed Duicon, a superb Austral Thrush and Patagonian Sierra-Finch. 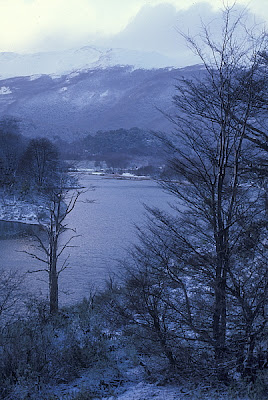 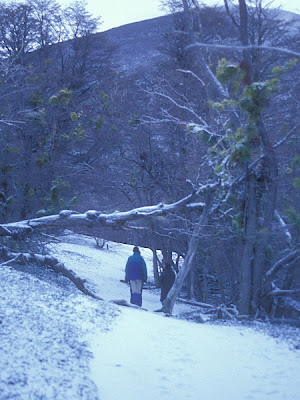 19th August.  I woke up after a very cold night to find the tent was covered in snow.  Unsurprisingly Mike was frozen too as the car must have been much colder to sleep in.  Fortunately the snow had stopped, leaving everywhere looking really spectacular.  We spent the morning birding in the park walking as far as the forest trail to Lago Negro which was frozen.   Most birds were seen in good forest opposite the restaurant where we retreated when it started snowing again.  A warm drink was most welcome and they had some very tempting cakes which were too hard to resist in celebration of seeing Magellanic Woodpecker.  Some American visitors there overheard us and asked what we’d seen.  Showing them a picture elicited the surprised response ‘How did Walt Disney know Woodie Woodpecker was here?’  Not sure, maybe he kept a World List too?  We returned to Ushuaia in the snow, checked into one of the less-expensive hotels - central heating much appreciated - and birded the eastern part of Ushuaia Bay from the car.  Thirty species today but they did include Spectacled Duck, both Steamers, Rufous-chested Dotterel, 2 pairs of Woodie Woodpeckers, 50 Thorn-tailed Rayaditos, 9 White-throated Treerunners and 250 Black-chinned Siskins. 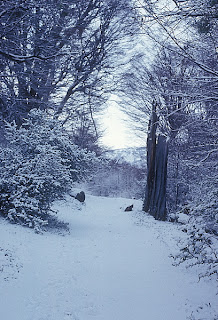 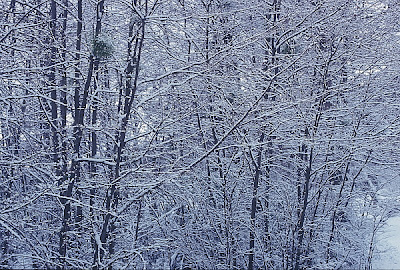 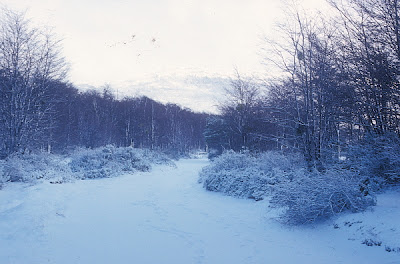 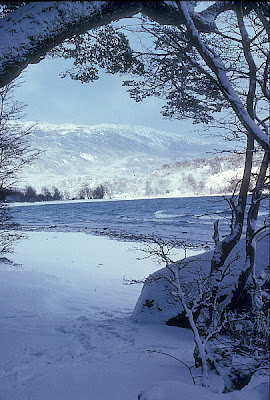 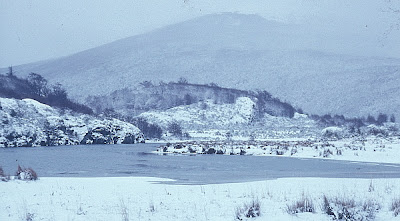 20th August.  After a warm night and breakfast we birded Ushuaia Bay between snow-showers, concentrating on the coast to the west of the airport peninsular.  A very enjoyable day with Black-browed Albatross, Ashy-headed Goose, both Steamers, Magellanic & Blackish Oystercatchers, Rufous-chested Dotterel, Patagonian Tyrant, Austral Thrush, Yellow-bridled Finch and Austral Blackbird.  The tyrant, thrushes and 200 finches were feeding along the beach, presumably an extreme cold weather displacement. 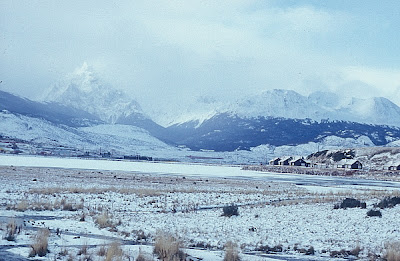 21st August.  We checked out of our comfortable hotel and revisited Ushuaia Bay to the west of the airport in a blizzard.  The Patagonian Tyrant was still present as were good numbers of Austral Thrushes and Yellow-bridled Finches although we didn’t see as many as previously.  We returned the car having done just 110 kms in 3 days and caught the afternoon flight to Buenos Aires, fortunately the blizzard had abated by then.  We slept in the Domestic Airport again without incident. 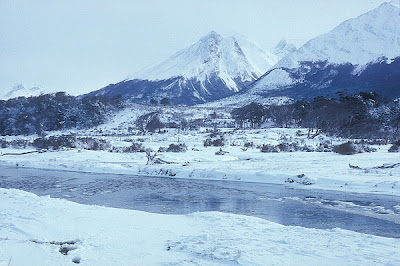 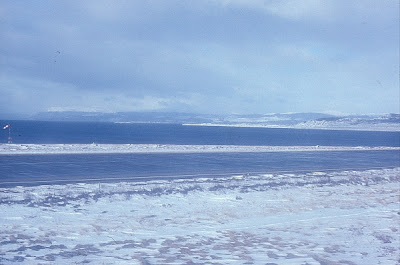 22nd August.  We caught the early morning flight to Iguacu where we were unable to hire a car as none of the companies at the airport had one available.  In the event we had only wanted a one day hire for a long shot look for Brazilian Mergansers near Wanda (Arroyo Uruguai).  We got a bus into town where we stayed in Residencial Lilian.  We dumped our gear  and returned to the nearby bus station to get another bus to Park National Iguacu.  We gawped at the falls by the hotel and then failed to get to the Garganta del Diablo as the track there was badly flooded and impassable.  We then spent most of the day on the Sendero Yacaratia, turning back at a broken bridge where it joined the Sendero Macuco .  The heat was quite a contrast to Ushuaia’s blizzards, day length considerably longer and bird diversity much greater.  Birds seen included 23 Snail Kites, Black-throated and Surucua Trogons, Chestnut-eared Aracari, Toco Toucan, Ochre-collared Piculet, Swallow Tanager, Chestnut-bellied Euphonia and Blue-naped Chlorophonia.  We caught the last bus back at 6 pm. 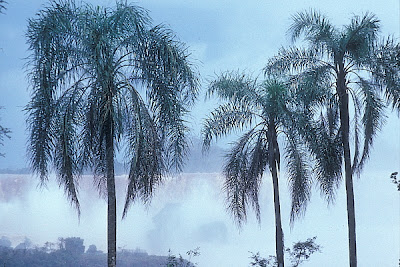 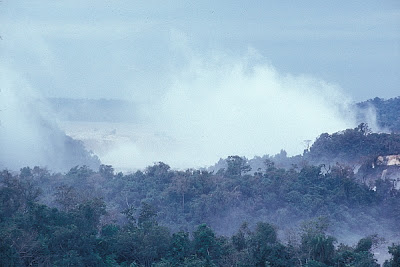 23rd August.  We caught the first bus to the falls at 7am, spent all day in Park National Iguacu, mostly on the Sendero Macuco half of the Yacaratia/Macuco loop, and returned on the last bus at 6pm.  A superb day with birds seen including Slaty-backed Wood-Rail, Black-throated and Surucua Trogons, Saffron Toucanet, Toco Toucan, Rusty-breasted Nunlet, Blond-crested Woodpecker, Wing-barred and Swallow-tailed Manakins, White-throated Spadebill and Southern Antpipit.
24th August.  Again we caught the 7 am bus to the falls.  All day in Park National Iguacu.  The flood water on the Garganta del Diablo track had fallen and after spending some time on the catwalk being amazed at the volume of water we returned to Sendero Yacaratia spending the rest of the day walking to the broken bridge and back.  Again we caught the last bus back at 6pm.  Birds seen included Black-throated and Surucua Trogons, Spot-billed Toucanet, Red-breasted and Toco Toucan, Blond-crested Woodpecker, Wing-barred and Swallow-tailed Manakins, Black-collared Swallow, Swallow Tanager, Chestnut-bellied Euphonia and Blue-naped Chlorophonia. 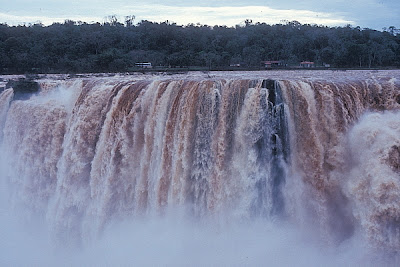 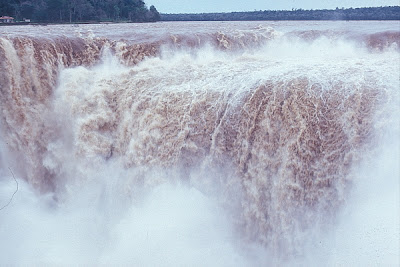 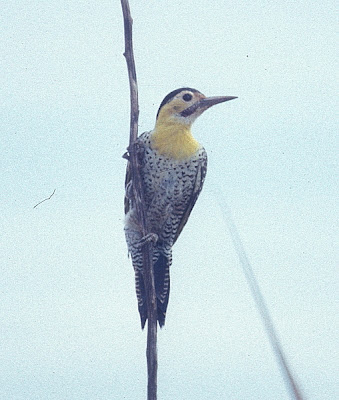 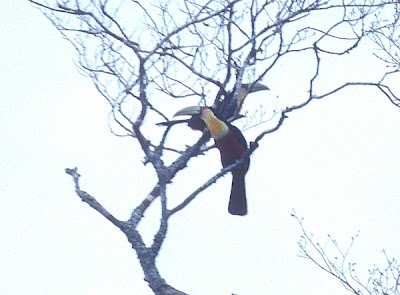 25th August.  We got an early bus to the airport and spent an hour in the forest there without seeing much before catching the morning flight to Buenos Aires   We visited Costanera Sur in the afternoon by taxi.  Being a Saturday it was quite busy with locals enjoying the fine weather.  We saw 50 species in three hours, not bad for any city site.  Although nothing was new or unexpected seeing Black-necked Swan, Cinnamon Teal, Black-headed and Lake Ducks, Long-winged Harrier, Plumbeous Rail, 3 species of Coot, Rudous Hornero, Spectacled Tyrant, Long-tailed Reed-Finch, Black & Rufous Warbling Finch, Great Pampa Finch, Yellow-winged Blackbird and Brown & Yellow Marshbird was a nice way to finish the trip.
26th August.  We managed just Rufous-collared Sparrow from Buenos Aires airport before catching our morning flight to London.  We had found Argentina to be a very modern country, impressively so by South American standards, with good infrastructure and (generally) good road signs.  The people were surprisingly friendly and English was more widely spoken than in most other South American countries we’d visited although our knowledge of some basic Spanish was helpful.  Crime appeared to be much less evident in Argentina than most other South American countries and we encountered no problems whatsoever.  The scenery varied from the very spectacular (Ushuaia, Iguacu, Lago Pozuelos/Abra Pampa) to the awful (most of Patagonia away from the coast).  The Chaco was also fairly grim.  Garry, Michael and Nick were, as to be expected, excellent travelling companions and my warmest thanks goes to them for making the trip so enjoyable.  Despite not visiting at an ideal time of year I considered the trip to have been very successful, and I ended up seeing over 400 species of which about 135 were new.  My personal highlights were South American Painted-Snipe and Stripe-backed Bittern at Campo del Tuyu, Rufous-throated Dippers at Yala River and Rio Los Sosas, White-browed Tapaculo at Rio Los Sosas, Spotted Nightingale-Thursh at El Rey, Magellanic Woodpeckers and White-throated Treerunners in Terra del Fuego NP and Southern Antpipit and Rusty-breasted Nunlet at Iguacu.