Saturday 11 April (continued).  Picked up from Cat Ttien after breakfast and drove towards Da Lat plateau stopping to bird the road at Deo Nui San for 2-3 hours on the way.  Highlights there were Annan Barbet 4 (later to prove very common), White-cheeked Laughingthrush 1, Grey-crowned Tit 3 and Eyebrowed Thrush 25 flying over.


Sunday 12 April.  Driven to Ta Nung for dawn.  All day there concentrating mainly on the flowering trees in the more open areas.  A fairly quiet day, not helped by only Nick seeing Grey-crowned Crocias and Orange-breasted Laughingthrush although I heard the latter.  Highlights for me were Leopard Cat 1, White-cheeked Laughingthrush 8, Black-headed Sibia 2, Black-crowned Parrotbill 2, Lesser Shortwing 2, Slaty-backed Forktail 1 and Vietnamese Greenfinch 1 male.


Monday 13 April.  Driven to Mount Lang Bian for dawn and spent all day there.  We were not able to drive up the mountain and no taxis around to take us so we walked up to the start of the trail.  A superb day despite some heavy rain in the afternoon.  Highlights were Silver Pheasant 1 female, Grey-headed Parakeet 12, Jay 6, Grey-crowned Tit 15, Grey-bellied Tesia 1, Pigmy Wren-Babler 1, Vietnamese Cutia 2, Collared Laughingthrush 2, Black-crowned Fulvetta 5, Eyebrowed Thrush 1, White-tailed Robin 4, White-throated Rock Thrush 1 male and Blue & White Flycatcher 1 cumatili. 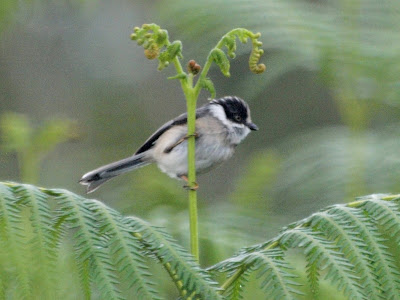 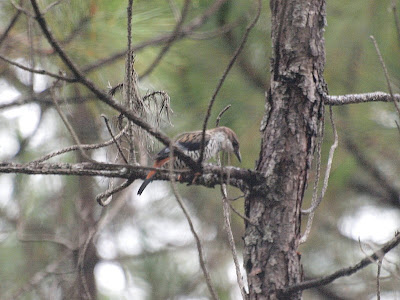 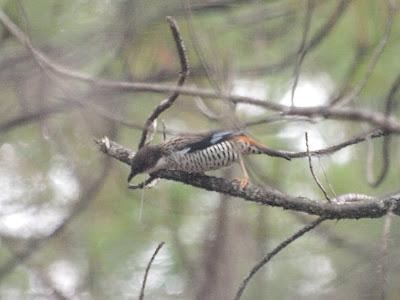 
Thursday 16 April.  Driven to Ta Nung for the morning where highlights were White-cheeked Laughingthrush 2, Grey-crowned Crocias 4 and Slaty-backed Forktail 2.  Then back to Deo Nui San where two Long-tailed Broadbills and a White-browed Shrike-Babbler were seen.
Friday 17 April.  All day on he forest trails at Deo Nui San.  Several times we heard what we tought was Green Cochoa but never managed to track it down.  Frustrating.  Highlights were Long-tailed Broadbill 1, Orange-breasted Laughingthrush 2, White-browed Shrike-Babbler 3, Black-headed Sibia 4, Black-crowned Parrotbill 8, Large Niltava 2.


Saturday 18 April.  A final morning attempt on Green Cochoa at Deo Nui San was unsuccessful before we were driven back to Ho Chi Minh City for our flights home.  Highlights were Spot-throated Babbler 2, White-cheeked Laughingthrush 3, Black-headed Sibia 2 and Black-crowned Parrotbill 3.
Posted by richard fairbank at 18:56 No comments:

Nick Preston and I had visited Vietnam for two weeks in 1997.  It was nowhere near long enough to do this fascinating county justice and a revisit was a priority, more so as we had missed Blue-rumped Pitta.  Having only two weeks again we decided to concentrate on Cat Tien and the Da Lat plateau, the latter an area we’d not fitted into our earlier trip.  We arrived late at night, were met at the airport and taken to a nearby hotel.  We set off early on Sunday 5 April and were dropped at Cat Tien late morning.  The rest of the day was spent birding the Lagerstroma trail, particularly in an area near the start of the trail where Ding Li had seen Blue-rumped Pitta a couple of weeks earlier.  This particular section off the forest was very busy with noisy School parties when we arrived but had quietened down later on, especially during heavy afternoon showers.  The rainy season appeared to have started in earnest leaving the forest rather wet.  This did not bode well for hearing birds rustling in leaf litter.  Highlights of our first day included Banded Kingfisher 1, Blue-eared Kingfisher 1, White-browed Piculet 1 and Siberian Blue Robin 1 female.

Monday 6 April.  All day was spent on the Lagerstroma and Uncle Dong trails.  Unfortuantely Nick left the forest for an hour in the middle of the day and hadn’t been gone more than ten minutes when on another circuit of Ding Li’s site I saw a female Blue-rumped Pitta 8m off the trail although after a minute or two it hopped further in and disappeared.  Highlights were Germain’s Peacock Pheasant 1 male, Blue-winged Pitta 1, Bar-bellied Pitta 3 (2 males and a female), Blue-rumped Pitta 1 female and White-crested Laughingthrush 3.

Tuesday 7 April.  We hired a jeep to take us to the start of the Bau Sau trail and walked to Crocodile Lake for the day.  The jeep picked us up an hour before dusk.  Highlights were Siamese Fireback 2 (male & female) Red Junglefowl 2 males, Dusky Broadbill 2, Bar-bellied Pitta 5 (4 males) and Indochinese Green Magpie 1. 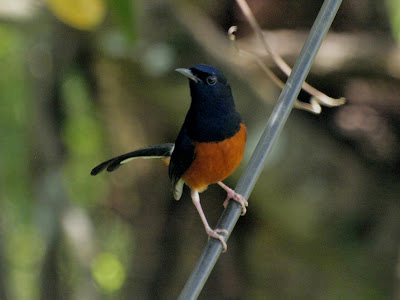 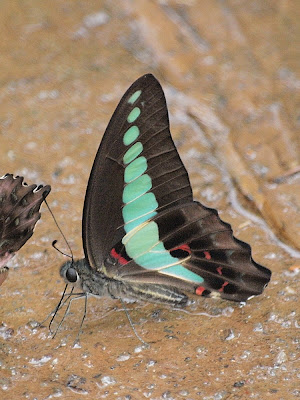 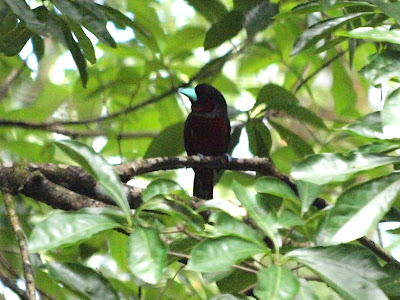 Thursday 9 April.  We again hired a jeep to take us to the start of the Bau Sau trail and walked to Crocodile Lake.  Highlights were Siamese Fireback 3 pairs (two on trail and one on road), Green Peafowl a pair from Crocodile Lake hide, Bar-bellied Pitta 6+ (3 males and 3 females on walk out, two males on walk back) and Blue-winged Pitta 1. 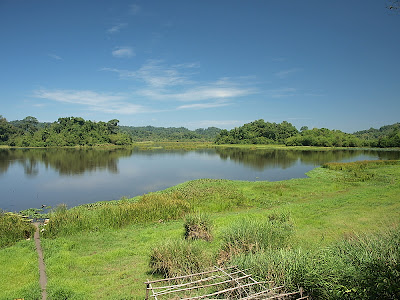 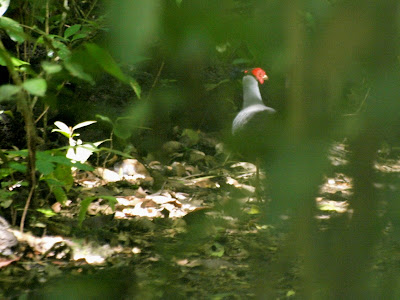 Friday 10 April.  One of the rangers suggested the rattans along the Bau Sau trail as being the best area to look for Blue-rumped Pitta so we devoted our last full day to this, again by jeep, finishing on the Lagerstroma trail.  Highlights were Siamese Fireback 2 males) Germain’s Peacock Pheasant 1 male, Blue-bearded Bee-eater 1, Black & Red broadbill 1, Dusky Broadbill 4 and Bar-bellied Pitta 3 (2 males).  Low points were my only getting a poor flight view of a calling Banded Broadbill and our continuing lack of success with Blue-rumped Pitta.

Saturday 11 April.  The final throw of the dice for Cat Tien as we were being picked up after breakfast.  After much thought we decided the start of the Lagerstroma trail represented our best bet.  We entered the forest before it was light and sat quietly scanning the section of trail that Ding Li had recommended and where I had seen one from on our first full day.  At 05.45 a female hopped onto the side of the trail where I was scanning.  Nick quickly got onto it as it stood motionless before it then hopped across the trail and out of sight.  Nick then saw it beside the trail looking at us and I got onto it before it melted away.  We waited but it didn’t return.  A brilliant end to our time at Cat Tien, we breakfasted, checked out and crossed the river to find our driver waiting.  Best birds were Dusky Broadbill 5, Blue-rumped Pitta 1 female, Blue-winged Pitta 4 heard, Racket-tailed Tereepie 1, Puff-throated Babbler 2 and Siberian Blue Robin 1 male.
﻿﻿ ﻿﻿
Posted by richard fairbank at 13:06 No comments: