I really do not enjoy urban birding and it takes something rather special for me to consider it. An Alpine Swift presumed to have roosted on the Virgin Atlantic Building in Manor Royal, Crawley was too tempting despite a poor forecast and a live Grand Prix on the BBC.  I arrived on site at 07:00 BST to find about 20 others gathered but the bird had not been seen.  After a couple of hours with no sign observers started drifting off and soon after 10:00 it appeared that Tony Cook, Gordon Beck and I were the only ones left.  The weather brightened and for a minute the sun broke through but still no sign of the bird along the sheltered side of the building where we were concentrating on watching.   Five minutes later we heard Lee Evans shouting 'did you see it'. No!  It had flown out of the front of the building and off due north. He and another had been in their cars out of view from us.  Lee had heard the other car door slam, which had woken him from a nap, and seen the bird fly directly over.  We had been looking in the wrong direction, bummer.  I assumed that it had gone but as it was not yet raining decided to wait at the Virgin Atlantic building in case it returned.  The others drove off to check other areas but 20 minutes later it came over my head and cruised around the building.  I quickly phoned Lee and Gordon at the bird performed well for an hour or so, disappearing for  20 minutes or so before returning.  It was flying very close to the building looking as if it was trying to land which it soon did, clinging to the top of the brickwork under the eaves.  Very nice.  While waiting for the swift I saw a pair of Grey Wagtails, a Jay and heard a Black Redstart.  It was also nice ot catch up with some friends.  Maybe urban birding isn't so bad after all. 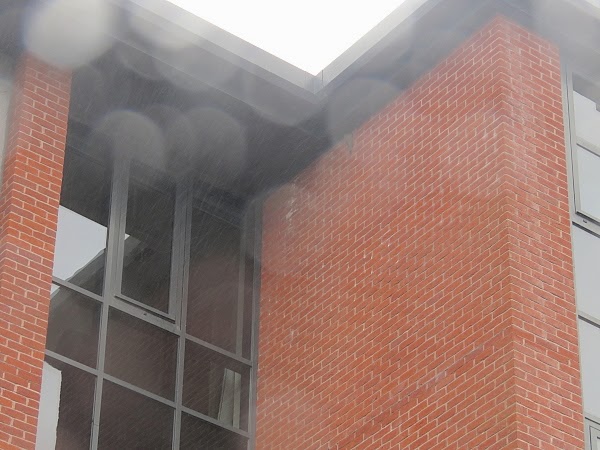 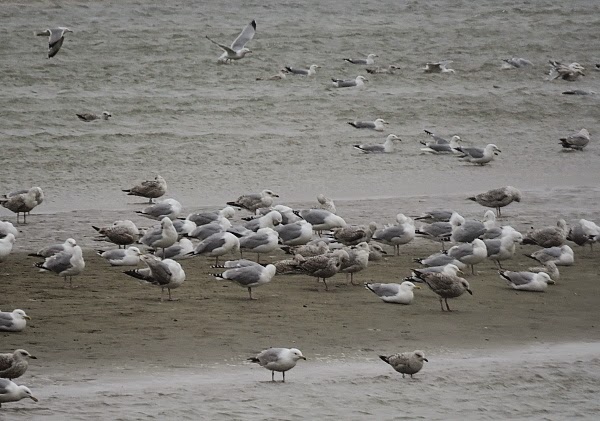 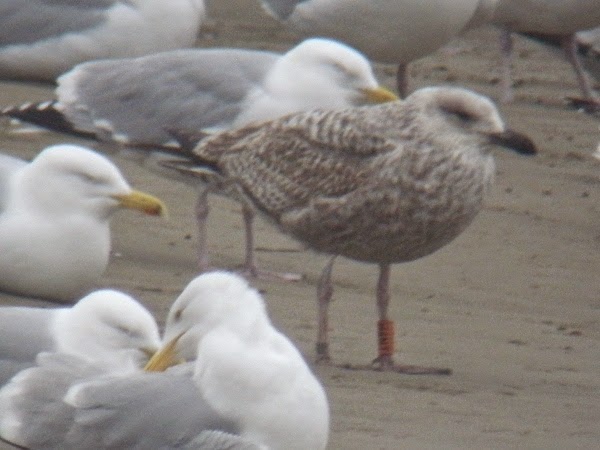 In 2005 there was a Gull-billed Tern on the Adur for several days in late May.  Now almost 10 years later a good contender for a tern-billed gull was present. 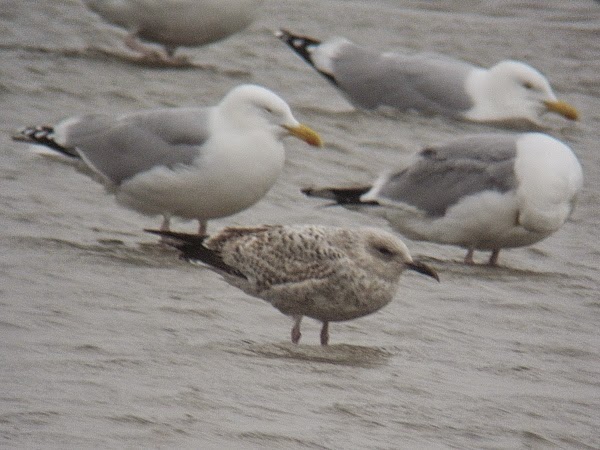 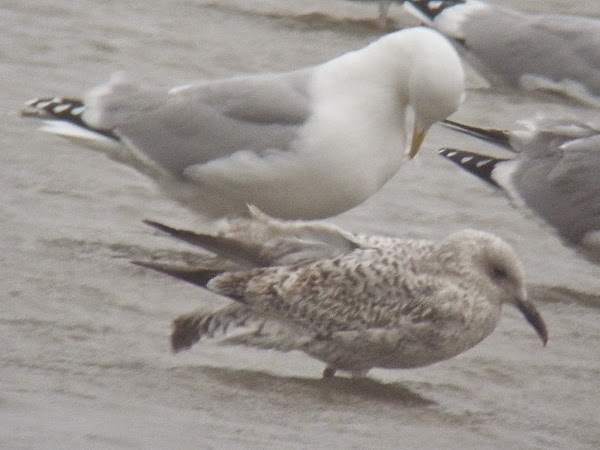 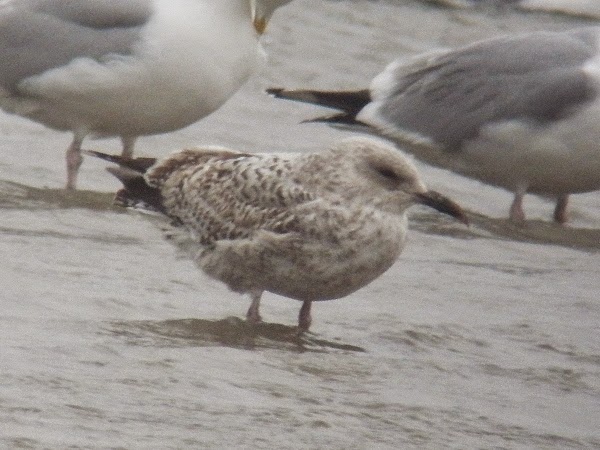 Posted by richard fairbank at 19:53 No comments:


Posted by richard fairbank at 19:05 No comments:

never ending northerlies saved by a SeO or two

Wednesday 25th.  I wasn't expecting much passage with a cold NNW wind and very clear visibility and so it proved with 105 Black-headed Gulls and a Gannet east and single Red-breasted Merganser and Little Egret west in an hour.  My visit to the end of Shoreham Harbour's West Arm was salvaged by a high Short-eared Owl coming in off the sea at 06:31.  It continued over Shoreham Beach with an escort of Herring Gulls.  At 06:57 a second bird, presumably different, did likewise coming in high from the SW.  A Rock Pipit was on the West Arm and a Peregrine on Southwick Power Station but few gulls were on the Adur at low tide.  A trip to Arundel WWT with Megan was also very quiet, although we heard 3 Cetti's Warblers and heard and saw several Chiffchaffs.

Tuesday 24th.  A Peregrine was on Southwick Power Station as I cycled to work.  Cycling is great, apart from when into a strong wind, in heavy rain or one has a puncture.  The latter is thankfully by far the most infrequent but I had a flat on the way to work and it took me the best part of half an hour to change it - most of it getting the tyre off the wheel.

Monday 24th.  Both Peregrines were on Southwick Power Station as I cycled to work.

Sunday 23rd.  I didn't manage to stick out an hour seawatching at Shoreham Harbour where nothing was going past and the highlight a Mallard inside the entrance.  The Adur was little better although a brief White Wagtail was nice.  In the afternoon Megan and I walked over the lock-gates seeing a Purple Sandpiper from the East Arm and a Peregrine on Southwick Power Station.

Saturday 21 March.  I met John King at Splash Point, Seaford where a very quiet seawatch (it was clear and northerly) produced a Slavonian Grebe on the sea and a Red-throated Diver, 16 Brent Geese, 3 Common Scoter and a Mediterranean Gull passing east.  A Rock Pipit and an alba Wagtail were on the breakwater and two colour-ringed gulls nearby.  We drove to the barn and walked a short circuit to the edge of the golf course and back up Hope Gap seeing only Meadow Pipits.  The Charleston Reedbed area was better although the wind had picked up and the more interesting birds were not overly co-operative.  The pair of Garganey were distant and often out of sight in vegetation, a Ruff only appeared out of a ditch once and the Great Grey Shrike although close was only seen briefly before dropping behind the riverbank.  A very low tide tempted me to try the Adur at dusk for more colour-ringed gulls but none were evident amongst the estimated 800 Common, 500 Black-headed and 300 Herrings gathered there.


Friday 20 March.  A Peregrine on Southwick Power Station on my way to work.

Thursday 19 March.  A Peregrine on Southwick Power Station on my way to work.  A low tide is always welcome on the way home with hundreds of gulls gathering before roosting on the sea.  I estimated 700 Common, 500 Herring and 300 Black-headed but could pick nothing out amongst them with my 8x20s.

Posted by richard fairbank at 19:19 No comments:

Wednesday 18 March.  Three superb male Wheatears came in at Shoreham Harbour, two landing on the west arm and one on the east, before working their way north.  For me the first Wheaters are one of the year's most anticipated highlights and one that grows with each passing year, no matter how far behind the first arrival they are.  In this case 10 days later than birds seen at Pagham.   Also passing Shoreham Fort between 06:25-08:25 were 131 Brent Geese, 7 Shoveller, 7 Eider, 3 Common Scoter and a Red-breasted Merganser while 2 Rock Pipits were on the west arm and 2 Purple Sandpipers were under the wooden jetty.
Tuesday 17 March.  Two Rock Pipits by Carats Cafe, 2 Peregrines on/near Southwick Power Station chimney and 40 Brent Geese flying east offshore.  Also local Herring Gull A4AH at the University.

Sunday 15 March.  A quiet hour at Shoreham Fort with just 2 Common Scoter and 2 Red-breasted Mergansers moving east and two Purple Sandpipers under the wooden jetty. Later Megan and I walked a circuit from Lancing Ring to Cowbottom and Steepdown seeing 4 Buzzards, 22 Sky Larks (many in song), 3 Fieldfares and a Raven.  My mum's 89th birthday.
Saturday 14 March.  A visit to Newhaven and the Cuckmere with John King.  At the former we saw 18 Snipe, Kingfisher, Richard's Pipit and Stonechat. John picked out the Great Grey Shrike north of Exceat Bridge and south of it we saw single White-fronted, Greylag and Barnacle Geese, a Norwegian colour-ringed Greater Black-backed Gull, 20+ Rock Pipits, 2 Chiffchaffs and best of all a smart Firecrest. 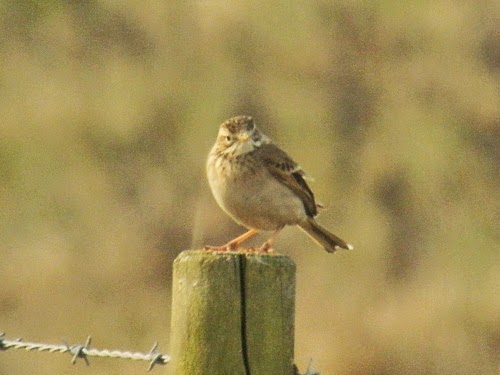 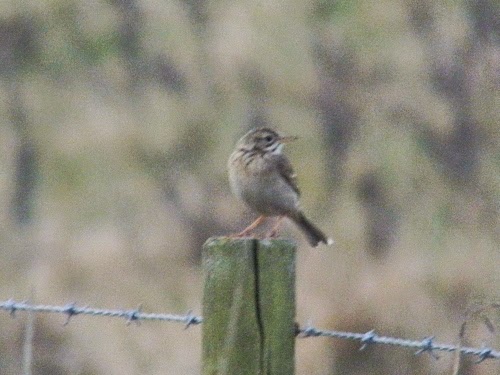 Thursday 12 March.  The lock-gates were open for a boat on my way home so I went on to the east arm seeing 12 Turnstones but not the hoped for wheatear.

Wednesday 11 March.  An Eider flying east saved an hour at Shoreham Harbour from being almost birdless, an adult Mediterranean Gull and returning North Thames Herring Gull were seen on the Adur at low tide while a walk around Mill Hill with Megan produced a single Buzzard.

Monday 9 March.  A Peregrine on Southwick Power Station chimney.
Posted by richard fairbank at 14:21 No comments: