Saturday 25 February.  A second attempt for the Glynde Great Grey Shrike was almost immediately successful despite light drizzle.  It was along the east then north edges of its favourite field just north of the river.  Next stop West Rise Marsh, Eastbourne where the Black-necked Grebe remained distant and so totally eclipsed by a pair of Great Crested Grebes displaying.  A Cetti's Warbler gave excellent views too but there was no sign of the Goosanders that had been present to Thursday.  At least 5 Cetti's were heard in a walk around Shinewater, a new site for me, but little was seen there other than Gadwall and Shoveler.   Heading back into West Sussex there was no sign of the Bean Geese on Henfield Levels.  Scaning Beeding Brooks from Hillside produced no geese but a look down Smugglers Lane in Beeding was successful with the 4 Bean Geese and 40 Grey Lags.  A Short-eared Owl and another Cetti's was seen on Beeding Levels, 3 Short-eared Owls from Greatham Railway Bridge, 2 Egyptian Geese at Sopham Bridge and finally, at 17:45, a Bittern climbed the reeds and flew a short way in the NE corner of Burton Mill Pond, remaining on view until te light faded at 18:00.  Also seen at Burton was a Kingfisher and 65 Pied Wagtails roosting in the reedbed. 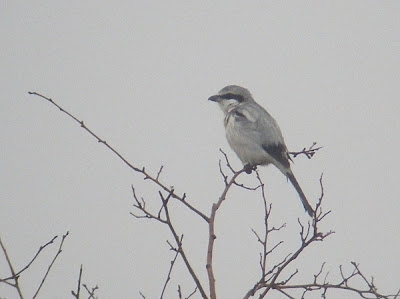 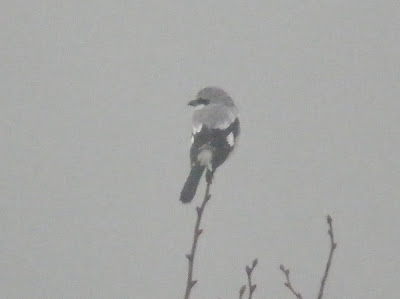 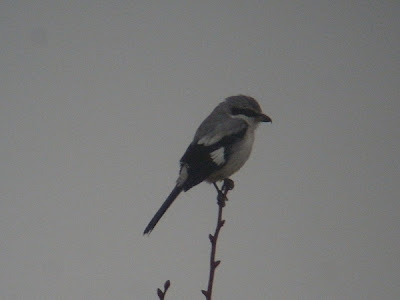 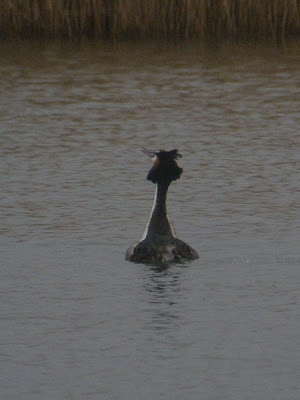 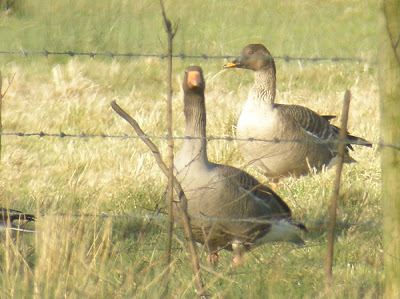 Sunday 19 February 2012.  A much more successful day!  I arrived at Shoreham Harbour's West Arm at 07:10 expecting to do a seawatch before going out for the morning with Megan but a first-winter (2CY) Iceland Gull feeding on the beach immediately to the west was a very welcome distraction.  It was a very washed out bird more akin to a second-winter but it had a dark eye.  Also on the beach were two North Thames colour-ringed Herring Gulls HW9T and WR4T.  Offshore Gannets and auks were moving on the horizon and 2 Razorbills were on the sea while 8 Purple Sandpipiers were on the inner arm as the tide peaked.  By now the Iceland Gull, which had been flushed by a dog onto the sea, had apparently flown east. 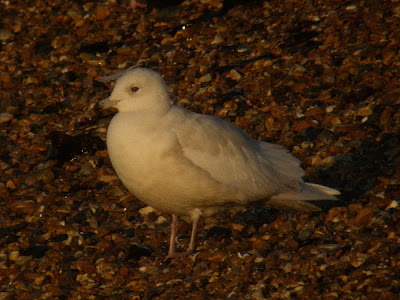 Megan and I went to Arundel WWT which was very busy.  I made sure David Cooper wasn't the only Sussex birder to photograph Scaly-sided Merganser this week although Arundel was a very poor second best to Japan!


I finished the day with an excellent couple of hours at Greatham were 2-3 Shot-eared and finally a superb Barn Owl performed very well. 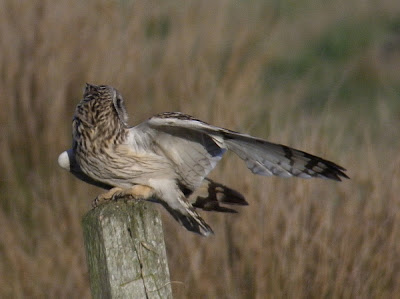 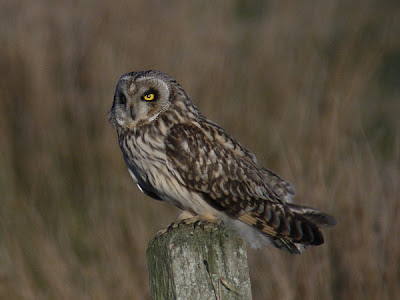 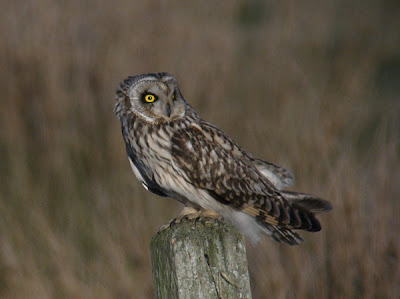 Posted by richard fairbank at 21:04 No comments:

A day perhaps best forgotten.  200 auks west off Birling and 40+ Gannets but only a Sparrowhawk aound the gardens there and a Treecreeper and 4 Long-tailed Tits in Belle Tout Wood.  A couple of hours wandering along the river bank at Glynde failed to produce the Great Grey Shrike, although I did flush a Woodcock from a nearby copse.  Simon Linington then appeared and following the old maxim that two pairs of eyes are always better than one, especially if they include Simon's, we tried the river bank for another hour or so but to no avail.  I then went to Beeding Brooks, arriving just as the rain did.  An hour and a half walking around produced two flocks of Greylags but no sign of the 4 Bean Geese that had been present at least until Thursday (weekend birding due to work has a lot to answer for).  Now thoroughly wet I called in at the Adur as it was low tide.  A North Thames colour-ringed Herring Gull was seen but by now the light was too poor to be sure of its ring number.
Posted by richard fairbank at 19:31 No comments:

Saturday 11 February.  A morning at Shoreham Fort, Widewater and the Adur before doing a few chores in town, I then tried Burton Mill Pond for Bitterns but despite staying to 17.45 none were seen.  A red-head Smew, Kingfisher and 7 Mandarins were at Burton with over 150 auks off Shoreham Harbour of which the nearer half were Razorbills.  A Knot was seen on Widewater and then the Adur.  A quick look for the Snow Buntings proved unsuccessful.  The only colour ring noted, despite a number of gulls on the Adur, was what was almost certainly Black-headed Gull R3 at Widewater, unfortunately in water just deep enough to cover half of its ring. 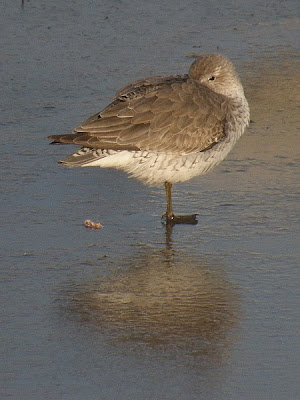 Sunday 12 February.  John King and I had a day in West Sussex.  We stated at Pagham Lagoon where the red-head Smew was on one of the few patches of open water, sharing it with at least 28 Little Grebes, while a Water Rail crept along the edge of the reeds behind.  We moved on to the North Wall where a Bittern had been glimpsed earlier and I heard then saw in flight a Bearded Tit.  We then walked north to North Homer Farm where we were unable to pick the Black Brant out of a flock of about 1650 Brent Geese although not all the flock was viewable.  We eventually tracked down the Whooper Swans a bit further north and also saw a superb male and rather drabber female Marsh Harrier and flushed a Jack Snipe.  We timed out return to the North Wall to coincide with the Paddyfield Warbler's first appearance for over 24 hours although it was very distant and rather brief and we were very glad to have seen it previously.  We headed into Hampshire calling in at Warblington to look for the Cattle Egret but couldn't even find the cows!  Next stop Hayling Oyster Beds where the Shore Lark was still performing and 9 distant Black-necked Grebes were scoped out in Langstone Harbour.  Back to Thorney via Warblington again (some cows were found this time but no Cattle Egret).  We'd hardly arrived at Thorney when the Great White Egret flew overhead high and off towards Prinsted.  Two Avocets were scoped on the Great Deep and we registered a third dip on the Cattle Egret before heading home after a very enjoyable day out. 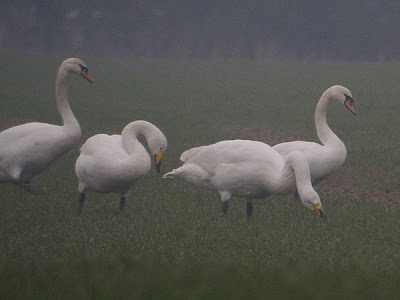 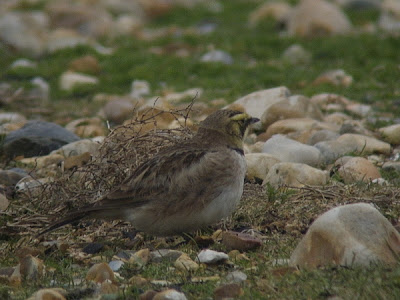 Posted by richard fairbank at 21:14 No comments:

Caspian Gulls in Sussex are often reported but with very few exceptions rarely are they fully documented.  On a high at having finally found one in the county that I am completely happy with (and have got reasonable images of) and the recent publication of a detailed British Birds article the temptation to try and rectify this was too great to resist.  Without digiscoping this bird may well have got away.  It would certainly have been hard to prove to the counties cynics (of which I'm one)!  Digiscoping doesn't have to be expensive if one has a telescope already and is only interested in a blog or getting images for identification purposes.  My camera cost £85 (although it is an unfashionable yellow!) and I made an 'adaptor' out of a pill box lid and a couple of washers costing 50p that works reasonably well most of the time.


Circumstances of observation. As reported on my blog, Frank Lambert and I found a first-winter (2CY) Caspian Gull about half-way along the West Arm of Newhaven Harbour on Sunday 5 February. It was present from at least 10.15-11.10am. Although it was rather distant, and the light poor for photography, the digiscoped images copied below show most of the necessary features. It was also seen briefly in flight, by both of us, and showed a very pale whitish underwing, white rump and solid black tail bar. John Cooper saw the same bird the following day when it, or a bird appearing similar, was also seen by Tony Cook, Matt Eade and Paul James.
Identification. This appeared a classic individual in every respect with a long, parallel sided predominantly dark bill, small white head with small forward placed dark eye, hind neck streaking, 4 coloured body (white head/underparts, grey mantle, brown coverts and black primaries), all dark tertails with white thumb-nails, long this legs and attenuated rear. It also had the ventral bulge, long primary projection and in flight a very pale/whitish underwing, white rump and black tail bar. However an apparent gull ‘expert’ is alleged to have expressed concerns about it not having sufficient grey on the mantle for this stage of the winter for it to be a Caspian Gull.   This, if true, is nonsense in relation to the bird photographed here if a quick internet check revealing similarly plumaged birds photographed at this time of year is to be believed. Further, in Caspian Gulls “moult is suspended for the winter – most birds complete post-juvenile moult by October with no (or only exceptional) further replacement of feathers beyond this point. Moult commences again in spring from April onwards.” (British Birds 104:709-10). Photographs of a bird taken in March showing less grey on the mantle than the Newhaven Caspian Gull (British Birds 104:plate 420) and another taken in January showing more (British Birds 104:plate 421) add weight to this as once a bird suspends its moult (by October) it will remain more or less unchanged until April (bar any normal wear).

Trait scoring. Several highly competent observers have expressed no concerns at all with this birds identification, considering it a classic, but would it stand up to the latest criteria – trait scoring? Identification of Caspian Gull – part 2 by Gibbins, Neubauer & Small (British Birds 104:702-742) is the essential reference for this analysis.
For first-winters seen between October and March the above paper provides a system of scoring based on certain ‘traits’ to differentiate most pure Caspian Gulls from Hybrids. When added up these trait scores will indicate whether a bird is a Caspian Gull (combined score 12-25), Hybrid (22-32) or Herring Gull (29-37). Birds in the overlap zone are best left indeterminate. For a safe Caspian Gull identification a score below 22 is required although the lower the score the better.

Trait 1. Extent of scapular moult. On this bird no first-generation feathers are present. This feature is exhibited in 92% of Caspian Gulls but only 13% of Herring Gulls and 78% of hybrids (based on samples of 63, 85 and 12 respectively). Score = 0.

Posted by richard fairbank at 19:47 No comments: