9 January 1978.  All day was spent in the Masai Mara National Park, entering from the east soon after dawn and leaving at dusk from the north-west.  Time was spent at Keekorok Lodge, driving around and in the northern corner.  It was easily the best reserve for animals that we visited and we saw Cheetah, Wart Hog, Giraffe, Elephant, Spotted Hyena, Olive Baboon and assorted antelope, although not in the numbers often seen on TV.  Birds included Caspian and Wattled Plovers, Narina’s Trogon, Bare-faced Go-way-bird, Woodland Kingfisher, White-browed Robinchat and Red-collared and Yellow-mantled Widowbirds.

10 January 1978.  We drove to Lake Victoria in region of Kendu where we birdwatched in marshy areas on the lake’s edge and also at an inland pool several miles to the west.  We then drove around the lake to Kisumu, stopping in paddyfields on route.  Finally to Kakamega where the last few hours of daylight were spent in forest.  Best birds included Black & White Casqued Hornbill and Ludher’s Bush-Shrike.

12 January 1978.  Again all day spent in Kakamega, mainly in area of sawmills then back to the river and finally the area nearest to Kapsabet.  Drove overnight to Kitale.  Best birds for me were White-spotted Flufftail, Emerald and Red-chested Cuckoos, White-headed Wood-Hoopoe and Abyssinian Hill Babbler.  Chris saw Orange-starred Bush-Robin which was very gripping.

13 January 1978.  We drove from Kitale to Kongalai spending most of the day on the side of hill on the escarpment.  From there we drove to Kapenguria where we arrived shortly after dark.  After waiting several hours for petrol and asking about roads we set off north getting halfway to Ortum where we camped.  Best birds were Pallid Harrier, the stunning Ross’s Turaco and Hemprich’s Hornbill.

14 January 1978.  We slowly travelled north towards Ferguson’s Gulf stopping in suitable habitat en route.  We arrived with an hour of daylight left which we spent on the shore of Lake Turkana.  At dusk we drove 10 miles back into the desert to camp.  Lots of excellent birds seen today including Swallow-tailed Kite (10), Bataleur, Secretary Bird, Cream-coloured Courser, Chestnut-bellied Sandgrouse, Namaqua Dove (including 40 sheltering from the sun under a small bush), Star-spotted Nightjar, Abyssinian Roller, Darnaud’s and Red & Yellow Barbets and Cut-throat.

15 January 1978.  Early to mid morning was spent in desert where we camped, the first part warming up after a clear cold night.  We returned to Ferguson’s Gulf and birdwatched for an hour on the shore of Lake Turkana, failing to find anywhere else to access the lake.  We went to Elye Springs in the afternoon where the car got stuck in the sand for an hour.  Back to Lodwar as dusk was falling.  Two flat tyres so we camped outside Lodwar.  Best birds seen were thousands of both flamingos, Swallow-tailed Kite, Cream-coloured Courser, White-winged Black Tern (500+), Chestnut-bellied Sandgrouse, Alpine Swift (1000+) and Abyssinian Roller.

17 January 1978.  We started the day birding in Kitale Forest Nursery.  Next we stopped at a roadside dam north of Eldoret and then spent time in the Northern Tinteret Forest.  From there we drove south to Nakurua and Gilgil, the last part in darkness, and then overnight to Naivasha.  At one stage of the journey the road seemed to disappear in a section of roadworks.  Mark asked one of the workers where the road was and was told ‘not to worry it will be along in a minute’.  A few bulldozes later it was!  Best birds were Spotted Eagle Owl, Ross’s and Hartlaub;s Turacos, Black-throated Wattle-eye and a white male Paradise Flycatcher.

18 January 1978.  The first part of the day was spent in the Crescent Island area of Lake Naivasha.  From there we drove on to Hell’s Gate and finally round to the northern part of the lake where access was obtained by walking across fields.  We drove overnight towards Magadi stopping about 60 miles short.  Best sightings were Lammergeyer, Verreaux’s Eagle, African Rail, Malachite and Pied Kingfishers and a White-tailed Mongoose.

19 January 1978.  We drove down to Lake Magadi with few stops.  Once there we spent time on lakeside and in surrounding scrub.  Returned to Nairobi where last hour spent in grounds of Hillcrest Secondary School.  Spent night on Ray Moore’s floor in the Karen area of Nairobi.  Best birds were Kori Bustard, Chestnut-banded Plover, Giant Kingfisher (another catch up for me), White-throated Bee-eater, five species of wheatear and Red-throated Tit.

20 January 1978.  Early morning in the garden in Karen where I was asking Ray Moore how frequently he saw Giant Kingfishers, something I'd missed and was very keen to see.  Almost before he could say not very often Chris picked up one as it flew past.   We then drove into Nairobi National Park negotiating muddy roads to reach the Hippo Pools for the rest of the morning.  We then drove to the airport, returned the car somewhat the worse for wear and had time for a quick look around the airport area (not seeing much) and museum before flying home.  Best birds were Ostrich, Long-crested Hawk-Eagle, Shelley’s Francolin, Peter’s Finfoot and Giant, Malachite and Pigmy Kingfishers.

A superbly eye-opening trip with me seeing just over 600 species in 4 weeks, of which about 500 were new.  Not a patch on what can be seen now but a reasonable total with little information, very poor literature, a somewhat erratic itinerary and no recordings.  Needless to say I'd seriously got the bug for long haul birding and have pretty much never looked back.  Many thanks to Chris, Mark and particularly Pete for inviting me along.

1 January 1978.  Drove to Mzima Springs for mid morning then out of Tsavo West and across to Amboseli looking at the marsh near the Observation Hill before dark.  Camped outside one of the lodges.  Best sightings were 4 Cheetahs, 50 Elephants and a good range of other mammals, Goliath Heron, three species of bustard including displaying Kori, Two-banded Courser, Long-toed Lapwing and our first Kitlitz’s and Blacksmith Plovers.

2 January 1978.  We were confronted by one of the wardens in Amboseli as we were packing up the tents  Apparently we should not have camped in the park as it was dangerous even right by a lodge, as we had been.  Most of the day spent in Amboseli and wooded stream just north of Namanga.  Then drove on to Nairobi and after dark on to Nyeri.  Best sightings were Crested Francolin, Temminck’s and Two-banded Coursers, Red-billed Oxpecker and the usual mammals.

3 January 1978.  Spent morning outside Nyeri and in grassland between there and Nanyuki.  This delayed us arriving at Mt Kenya where we only had the afternoon, taking the Sirimon track to its end at c11,000 feet.  Birded different habitats at different altitudes. Drove overnight up towards Marsabit stopping N of Archer’s Post with a flat tyre where we decided as we were in the middle of nowhere to camp rather than change it.  We’d earlier driven through what appeared to be a thorn bush across the road.  We later realised it was probably to highlight a serious pot-hole or worse, which we’d also driven over, but at the time we feared it might be an impromptu roadblock set by bandits!  Best sightings were Zorilla, Jackson’s Francolin, Hartlaub’s Turaco, Abyssinian Nightjar, Cinnamon-chested Bee-eater and Long-tailed Widowbird.
4 January 1978.  We continued up to Marsabit often stopping in good scrub.  We’d changed the tyre but got another flat within 10 kms and had to drive to the next village on it.  Here we spent several hours repairing punctures.  We climbed up behind town of Marsabit and looked in woods there before driving north into Didi Galgala desert where we camped.  Best birds were Somali Ostrich, Lappet-faced Vulture, Heuglin’s and Kori Bustards, Cream-coloured Courser and White-throated Robin.

5 January 1978.  We started at dawn in Didi Galgala desert and continued driving north until we realised we didn’t have a lot of petrol left..  We returned to Marsabit to fill up and continued south, stopping in woodland by the road, before continuing slowly towards Isolio.  The last few hours were spent in very good scrub 60km north of Isolio.  Overnight we continued driving down to Nanyuki where we camped.  Birds seen included Heuglin’s and Cream-coloured Coursers, Chestnut-bellied and Black-faced Sandgrouse, Somali Bee-eater, River and Barred Warblers and Desert Cisticola.

6 January 1978.  From the outskirts of Nanyuki we drove down to Nyeri, through the Aberdares stopping for some time in bamboo zone on the west side without seeing much.  Then on to Naivasha where the last hour of light was spent on the shore at Lake Hotel in Crescent Island Bay.  Birds seen included Jackson’s Francolin and Black-winged Plover. 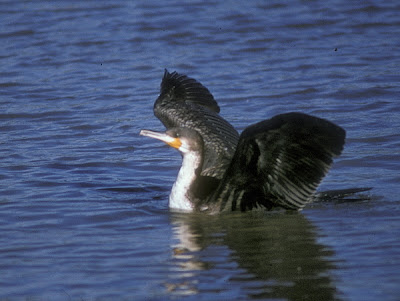 Posted by richard fairbank at 13:44 No comments: