This is the final posting relating to a summer trip to Japan with Nick Preston. We had started in Hokkaido, visited several sites in range of Tokyo and were now flying to Amami in the northern Ryukyu Islands where our flight departure board warned of possibly having to divert or return due to strong winds.

07 July (continued). We landed on Amami, after a fashion, 15 minutes late and skidding in heavy rain and the forecast strong winds. We picked up the car, another Nissan Note but with a less easy Sat-Nav, programmed our hotel and set off south to Naze. Our hotel, the Port Tower, was easy to find and we dropped off our bags before driving up to the Kinsakabaru Virgin Forest. It was still raining heavily and really too wet to leave the car so we waited until dark in the hope that the weather would improve. It didn’t so soon after dark we drove slowly back down seeing a superb Amani Woodcock on the road. Back in Naze the full force of the gale was evident, no more so than from our seventh floor room which faced it. It was a noisy night although that was partly due to the air-con ...
08 July. The diabolical weather continued during the night with very strong winds and heavy rain. We woke at 04:00 but it had not improved, putting paid to our hopes of any pre-dawn owling. We left the hotel at 06:45 with the wind seeming to have dropped a bit and perhaps the rain easing off. We drove back up to the Kinsakabaru Virgin Forest and parked by the 1.5km sign. We walked for 8 hours through superb forest to a metalled road at the far side and back, then down to the ‘Naze 10km’ sign and back. Several times the sun tried to break through only for the rain to pick up again, sometimes the wind appeared to have dropped only for us to turn a corner and realise we had been sheltered. I saw just nine species all day. Lidth’s Jays were common, at least by voice, I saw 8 well, and we saw 4 Amami Thrushes feeding on the track (perhaps the poor weather helped us here, and there presence made up for a lack of most other birds). 4 Ryukyu Green Pigeons and a Varied Tit were the only other birds of note. We were back at the hotel at 17:00 having felt too wrecked to stay in the forest until dark for another night drive. 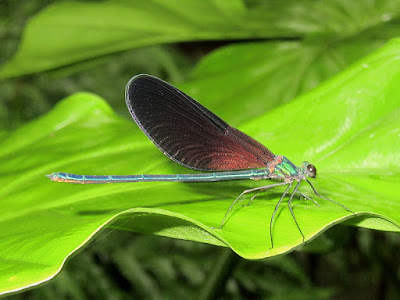 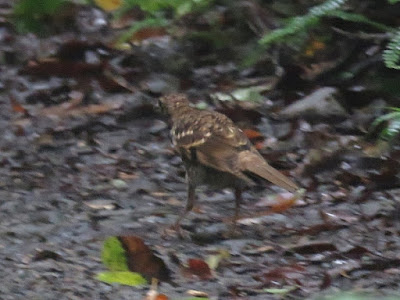 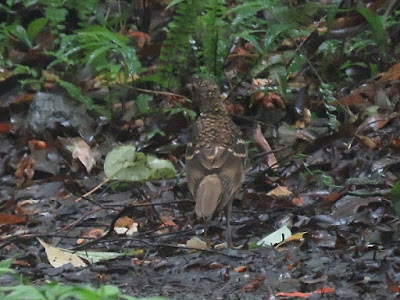 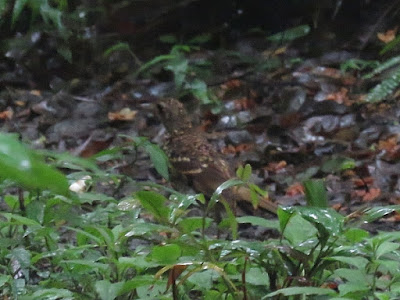 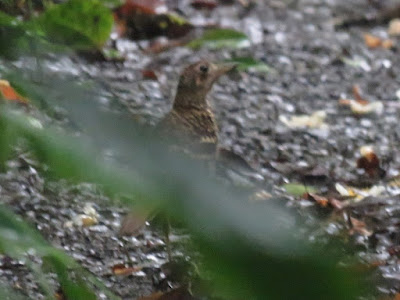 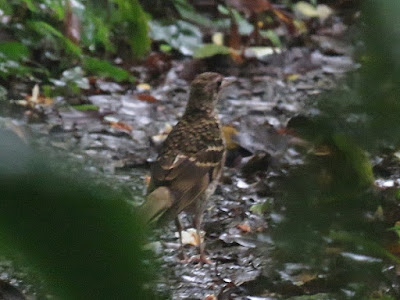 09 July. We were up at 01:00 and drove to the Kinsakabaru Virgin Forest sign in light rain seeing nothing. On arrival the rain increased making a night walk (or drive) pointless and we dozed in the car hoping it would improve. It didn’t. We were up at 05:00 just as it was starting to get light but nothing was calling. The rain eased off a bit and we walked to the red sign and back seeing the endemic Amami race of White-backed Woodpecker, a male of the Ryukyu race of Narcissus Flycatcher and a superb male komadori Ryukyu Robin (Amami Robin if treated as separate species). We saw no thrushes and wondered if the previous poor weather had helped us there although we only covered the area where one of our four had been seen. We left at 09:00 arriving back at the hotel at 09:50, just ahead of 10:00 check out. We drove north to the airport and with some time in hand stopped at Ose Beach just north of the airport. Here the sun was shining and we saw some herons, waders (Lesser Sand and Kentish Plovers and Grey-tailed Tattlers), a spoonbill (unfortunately not Black-faced) and an unexpected Ryukyu Minivet. We dropped off the car and checked in for our Ryukyu Air Commuter flight to Okinawa. It left on time, arriving in Okinawa in the rain. Car hire at Naha Airport was less efficient/more time consuming than elsewhere in Japan and we were slow getting away. Traffic in Naha was dreadful but once clear of town and heading north on the expressway we made good progress although the rain became progressively heavier. We arrived at Indigo, a very pleasant rustic guest house in Oku at 19:30 where we were welcomed by the guest house’s owners, Non and Ken. They immediately set about preparing a good meal for us. The dining area was a bar adjoined to their kitchen where, much to our amusement, what looked like a blow-torch appeared to be standard equipment. Turning it onto some Tofu was, in my opinion, about the only way to make it even close to being edible. A welcome end to what had been a long day. It was still raining but Non and Ken were confident it would improve. 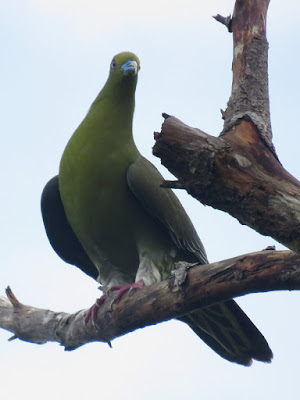 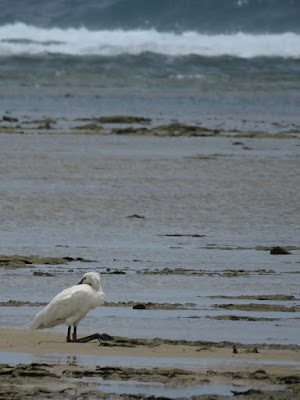 10 July. We were up at 04:00 and although dull and overcast it was not actually raining. We drove up towards the hills of Yanbaru stopping to listen for owls without success although a Ruddy Kingfisher responded to a background call on one of our recordings. We drove up towards Lake Benobi on metaled but at times very narrow roads, on one section pushing through overhanging vegetation with very little visibility. The more open roads were better with 2 Okinawa Rails hurriedly crossing as we turned a corner. Nice to see after missing them in 2003 but a disappointing view. We drove around until 13:00 by which time we were finding it hard to concentrate. We had seen 15 namiyei Ryukyu Robins (very much commoner than their Amami counterparts), a pair of Japanese Paradise Flycatchers feeding a fledgling on a nest and a Ryukyu Minivet but no more rails. We returned to Indigo and dozed until 15:00 when somewhat disappointed with what we had seen so far we headed back out to do a circuit to the windfarm and Terukubi-rindo. Five minutes down the road an Okinawa Rail was wandering around in the verge giving excellent views, albeit through the front windscreen. While watching this an Okinawa Woodpecker flew over landing in a tree opposite. I then saw 4 more rails and brought my robin total to 25 for the day. Surprisingly I was ahead of Nick’s sharp eyes on the former but well behind his 31 robins. The male Japanese Paradise Flycatcher was still near the nest but the youngster had moved away – we had been very fortunate with our timing that morning. We also saw 2 juvenile Ryukyu Flycatchers and 2 Varied Tits before returning to Indigo at 18:15. My 8th rail of the day was in a creek at Indigo when I wandered down to the beach before eating, although it scarpered as soon as it saw me. A Grey-tailed Tattler and 2 Blue Rock Thrushes were less nervous. We had another good meal including some fried garden flowers which for me were better than most Japanese food we had encountered! We left at 19:45 to go owling. Non had suggested a nearby area where she had seen or heard owls in the past so we decided to try there. At the third or fourth attempt at playing Ryukyu Scops Owl one responded directly overhead giving excellent views. Feeling wrecked and planning an early start in the morning we returned at 21:30. A predominantly dry day! 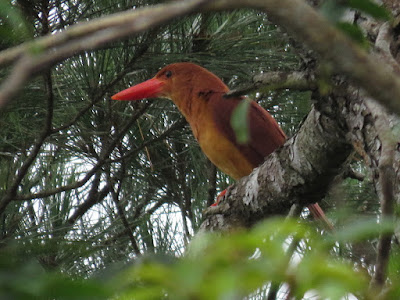 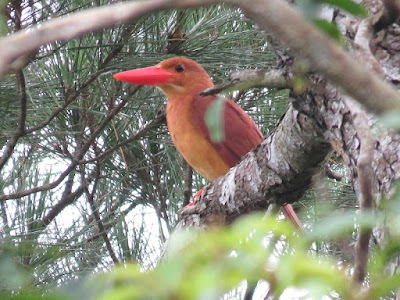 11 July. Our last full day in Japan, we were up at 03:50 and headed south towards Ada playing owl recordings at various locations. North of the junction with Highway 2 we heard a Japanese Scops Owl. It was close but did not call for long and we were unable to locate it. Shortly after a Ryukyu Hawk Owl responded to a scops owl recording and Nick located it silhouetted in a distant dead tree. It then flew directly towards us breaking off at the last moment to land in a nearby tree - rather intimidating for us so very alarming for a small owl. We drove a couple of different circuits around Terukubu-rindo and Benoti Dam. They were generally better than yesterday although Okinawa Rail views, I saw 7, were not amongst our best. Nick saw 51 Ryukyu Robins. I managed 44, 12 Okinawa Woodpeckers, Ruddy Kingfisher, Ryukyu Minivet and 3 Varied Tits but the Japanese Paradise Flycatcher family had moved on. We returned to Indigo just before 13:00 seeing 2 Black-naped Terns sat on a rock along the coast. We slept for a couple of hours before going out again to Cape Hedo, hearing an Okinawa Rail calling from a thicker part of the garden and another when we arrived at the cape. Japanese Bush Warbler was the best bird seen but views were nice and included a distant Indigo, even further Yoron Island and a giant Okinawa Rail on a hillside (we were very pleased we had seen real ones). Before diner at 18:00 we walked down to the beach and picked up a few small corals to take home. No sign of the previous evening’s rail but a male Blue Rock Thrush instead of juveniles. Diner was excellent, no tofu(!!), and we settled up with Ken and Non as we would be leaving early in the morning. They had been excellent hosts and we were very pleased to have stayed with them. An Okinawa Rail in their garden made it even better while Non showed us a robin nest in the roof of one of their rooms – they had fledged 3 youngsters and sometimes visited her in the kitchen. We heard a Ryukyu Scops Owl calling behind Indigo but it wasn’t particularly close so we returned to the area where we had heard Japanese Scops Owl that morning. No response but good views of a Ryukyu Scops was some compensation. 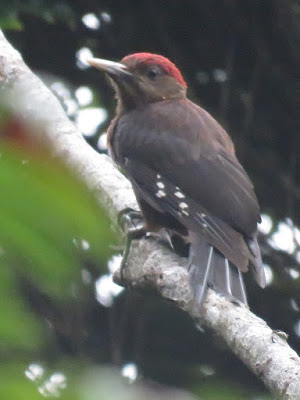 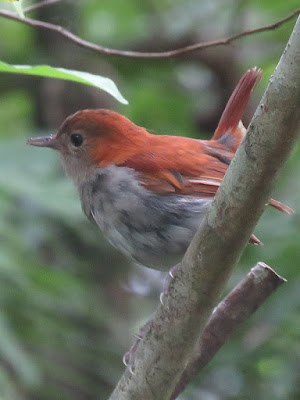 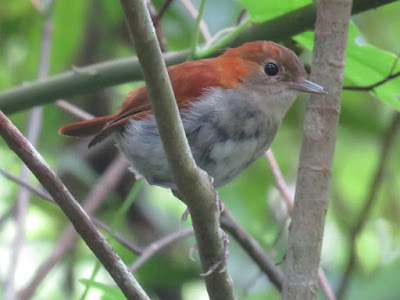 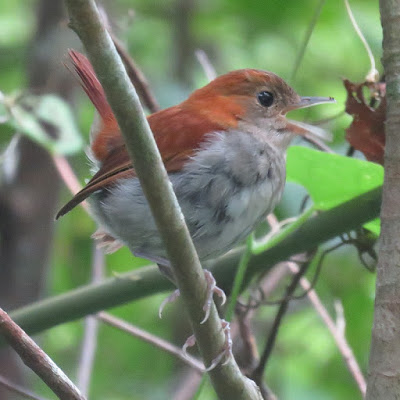 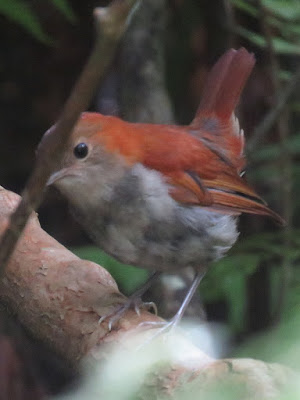 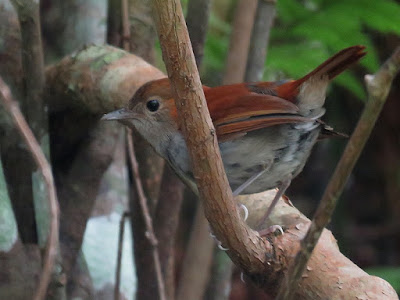 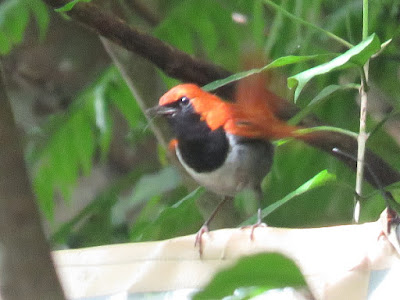 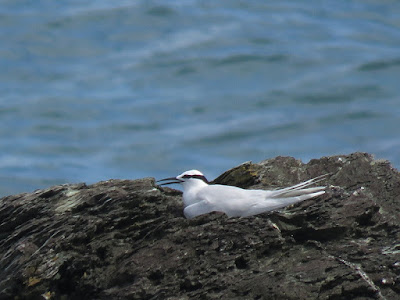 12 July. Our last morning, we were up at 04:00, packed the car and returned to the area where we had heard Japanese Scops Owl but only heard a distant Ryukyu Scops there and at one or two other places as it got light. A circuit of Terukubu-rindo and the wind turbines produced good views of 4 Okinawa Rails (most unfortunately through the windscreen) and for me 19 Ryukyu/Okinawa Robins (Nick saw more). We drove to the West Coast, seeing our best Okinawa Rail and an Okinawa Woodpecker, and south calling in at the bridge to Kouri Island. Here we had reasonable views of Roseate and Black-naped Terns before heading towards Naha and the expressway. A brief stop at the estuary by the Manco Wildfowl Centre produced another Spoonbill (unfortunately not Black-faced) and Osprey but little else. We dropped the car back at ABC, caught their shuttle bus to the airport and hung around for several hours there and then at Haneda before our comfortable flight to Paris. There after varying degrees of hanging around I flew to Heathrow and Nick to Newcastle. 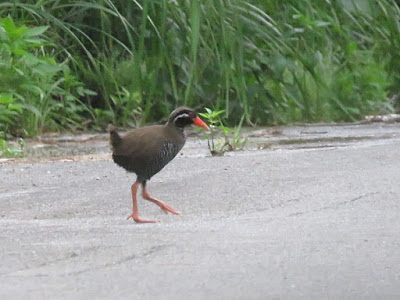 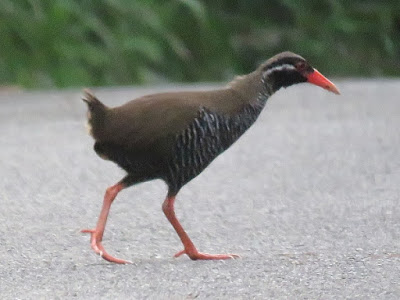 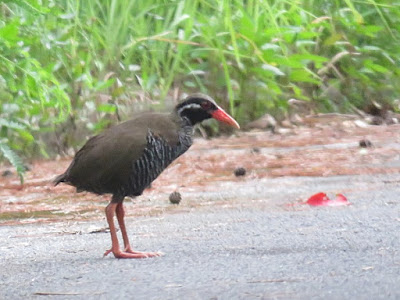 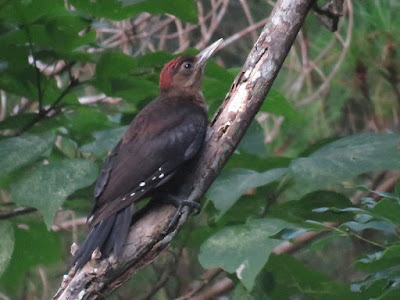 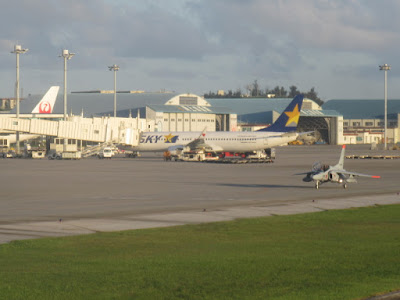 An enjoyable if rather tiring trip. Travel arrangements went much smoother than I had anticipated, thanks to Nigel Moorhouse’s expertise and a bit of internet preparation checking train timetables etc. Most signs having an English translation helped immensely as did English options on ticket machines. Birding was harder than anticipated, not helped by what felt like more than our share of adverse weather - without it we felt we might have found Grey Bunting and done better for owls but perhaps we wouldn’t have been so fortunate with Amami Thrush? Thanks to Dave Cooper and Nick Gardner for valuable pre-trip info, Nick for the usual excellent companionship and Takeyoshi (Take) and Mesako Matsuo at Lodge Furen, Mitsuo, Hiroka and Diasuke (Dice) at Edohara Pension and Non and Ken at Indigo for making us so welcome.
Posted by richard fairbank at 15:40 No comments: