This continues the blog of an Easter 1986 trip to Australia, based on scant notebook entries and vague memories and illustrated with digitised images of degraded slides taken at the time.

I’d landed in Brisbane after dark on 17 March.  I collected my bags and phoned Chris Corben, a birding contact who I hoped I might be able to stay with before going to Lamington.  How helpful he was to prove was beyond my expectations but it was not an encouraging start t ber told he and Tony Palliser were out spotlighting with Paul Noakes.  I was invited around anyway and got a taxi to their house where I was very kindly put up.  Chris, Tony and Paul returned having had an excellent spotlighting session seeing Sooty Owl and Tawny Frogmouth.  I was very gripped.  Paul was a trainee doctor spending some time working in a hospital in Brisbane but fortuitously had some time off.  Coincidently we both intended going to Lamington National Park for a few days and our plans would overlap in Cairns.  It made sense to team up where we could and Paul was to prove an absolutely superb travelling companion.

On 18 March Paul and I caught a morning bus south from Brisbane to O'Reilly's in Lamington National Park.  We arrived early afternoon having seen Laughing Kookaburras on the way.  We checked in to the camp-site and put our tents up while being distracted by incredibly tame Brush Turkeys and Crimson Rosellas.  It was a pleasant temperature, there did not seem to be an abundance of biting insects and birds seemed tame and quite numerous.  Even the camp-site ground was not that hard!  I was pretty sure I was going to enjoy this.  We headed into the forest on one of the trails and finished around the camp-site where some of the more secretive species came out to feed at dusk.  I saw nearly 30 new birds with highlights Wonga Pigeon, male Paradise Riflebird, Satin and Regent Bowerbirds, Green Catbird, White-browed and Yellow-throated Scrubwrens, both Bassian and Russet-tailed Ground Thrushes and best of all 12+ Southern Logrunners (noted as being ‘cosmic’ and not at all skulking as I was expecting them to be).  The only disappointment was that the Superb Fairywrens were in non-breeding plumage and nor were the Regent Bowerbirds.


We spent a full day long the Border Trail at Lamington on 19 March hoping for Albert’s Lyrebird and Rufous Scrub-bird (representatives of two small endemic families which occurred from about three hours out).  I saw one of the former well and another badly and we thought we might have heard the Scrub-bird which was, unlike most other species at Lamington, notoriously skulking.  Other birds seen included many of those seen the previous day (e.g. 30 Southern Logrunners!), 10 White-throated Needletails over a lookout, King Parrot, Topknot and Wonga Pigeons, an excellent female Paradise Riflebird, Eastern Whipbird, White-throated Tree-creeper and 6 stunning Easter Spinetails.  A superb day even if we had some unfinished business with Rufous Scrub-bird. 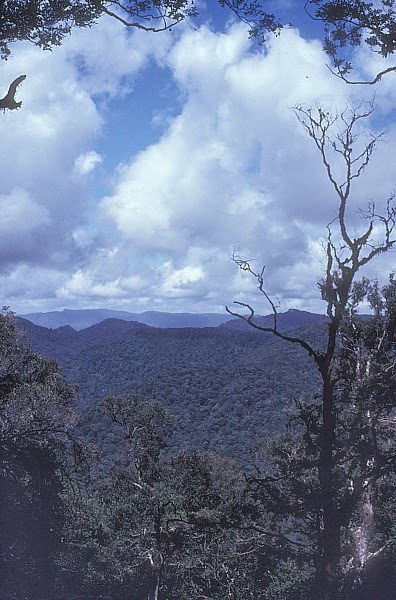 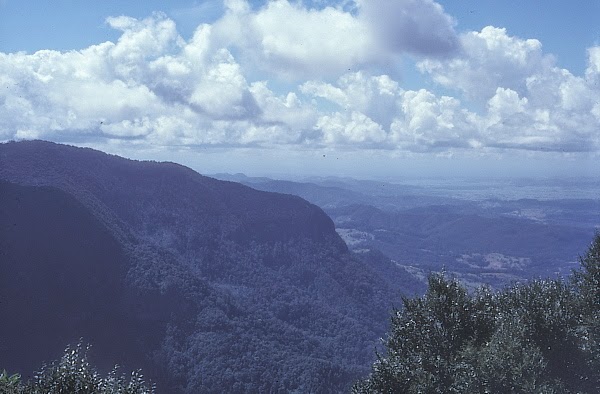 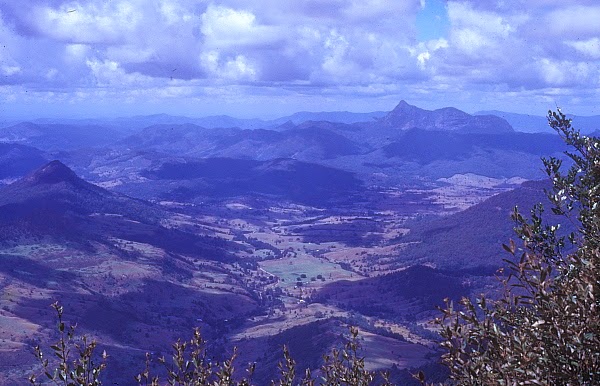 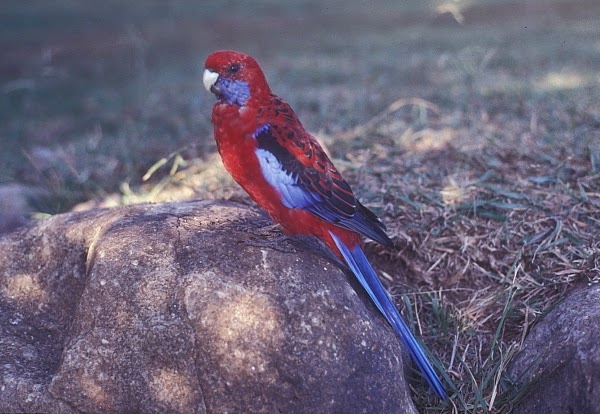 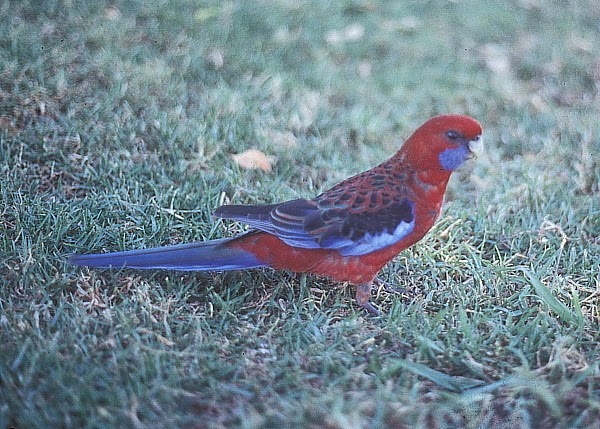 We were almost half-way through our visit to Lamington and as it was the only site I was visiting where Noisy Pitta could be expected I was getting a bit anxious as neither of us had seen or heard one (and Paul was very sharp even if I was not).  We decided to spend the 20 March going down to the waterfall and save a return along the Border Trail for our last day.  This proved a good move as we saw a Noisy Pitta on the edge of the camp-site, the first of three I saw well during the day.  We also saw White-headed and Wonga Pigeons, Satin and Regent Bowerbirds (still no adult males of the latter), Eastern Whipbird, Green Catbird, Bassian Ground Thrush, Spotted Pardalote and Red-browed Firetail.  I was still enjoying Southern Logrunners (seeing another 16) and managed to sit in a ravine for five minutes or more before realising there was a python three metres away.  How unobservant was that!  A squirrel glider after dark was fun but we had no luck with night birds. 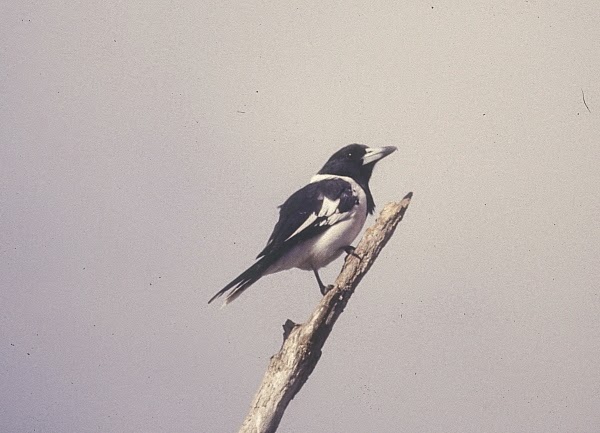 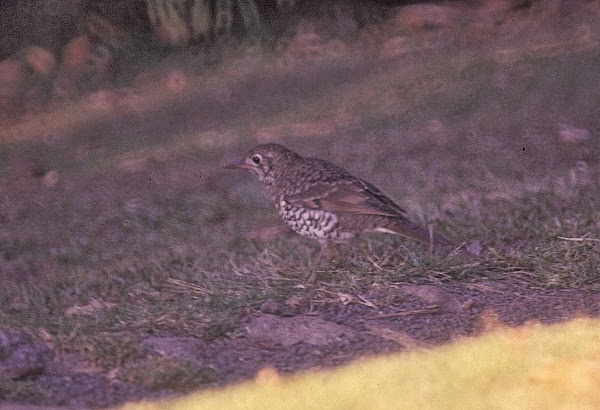 On 21 March we headed out early along the Border Trail seeing another 12 Southern Logrunners, a good flight view of a Noisy Pitta and a not so good flight view of an Albert’s Lyrebird.  We arrived at the scrub-bird area earlier than previously and heard three birds calling.  We concentrated on the closest and after some time I saw its head very well and the rest of it badly.  Just as well the head was the best bit!  On the way back we saw 2 Crested Shrike-Tits and 3 Black-faced Monarchs.  We packed up our tents, enjoyed more amazing views of the Brush Turkeys and Crimson Rosellas and caught the evening bus back to Brisbane.  I saw a Tawny Frogmouth briefly by the road on the way - not the views I had hoped for of such an unusual looking bird.  Back in Brisbane we returned to Chris Corben’s house where we discussed where we might all go birding the next day (a Saturday).  It was decided that Girraween offered the best prospects.


We were up well before dawn on 22 March and heading inland for Girraween, about a three hour drive and near the border with New South Wales.  I am not sure that I have ever had such a mind-blowing day.  I saw over 80 species of which half were new – a lot of new birds to take in, too many if I'm honest.  More so as several times Chris or Tony found a new bird for me before I’d finished looking at the last one.  They were red hot and by the end of a long day I was hard pushed to remember exactly what I’d seen and some of their finer identification points.  All thoughts of taking photos went out of the window, it was all I could do, and sometimes more, to keep up.  Highlights for me were Black Swan(!), Musk Duck, Common Bronzewing, Crested Pigeon, Glossy-black Cockatoo, Eastern Rosella, Red-rumped and Turquoise Parrots, Little Lorikeet, Red-browed and Brown Treecreepers, 7 new Honeyeaters (including New Holland), female Spotted Quail-thrush, Dusky Wood Swallow, Hooded and a superb male Scarlet Robin, White-browed Babbler, Scarlet Honeyeater, Grey Butcherbird, White-winged Chough, Southern Whiteface, Diamond Firetail and Plum-headed Finch.  I did not see most of these species again on the trip.


Tides were good for a morning looking at waders and on 23 March Chris took Paul and myself to some coastal and wetland sites around Brisbane, in particular Lytton, Brighton (home from home) and Deception Bay.  Highlights were my first Black-fronted Dotterel, Sharp-tailed Sandpipers and Eastern Curlew, 250 Great Knot (many in full breeding plumage), 30 Grey-tailed Tattlers, Crested and Caspian Terns.  Chestnut Teal, Diving Whistling Duck and White-eyed Pochard were also new as were Australian Goshawk and Mangrove Honeyeater.  We headed for Mount Nebo for an evening spotlighting seeing Barn Owl at dusk on the way.  Disappointingly there was a rowdy barbie in the area where they had seen Sooty Owl the previous week and attempts at playback there and nearby were unsuccessful.  We did spotlight 2 Boobooks and 7 Tawny Frogmouths, some of the latter giving amazing views.  Fortunately my disappointment at seeing one badly when leaving Lamington had been short lived. 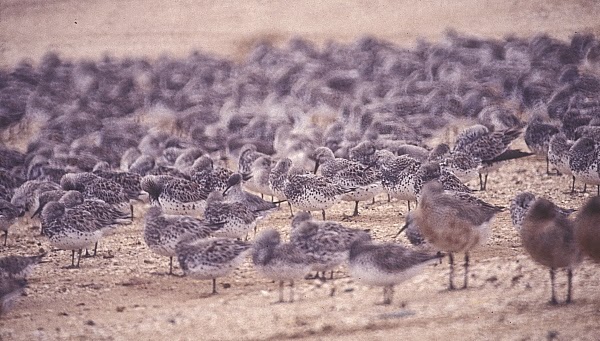 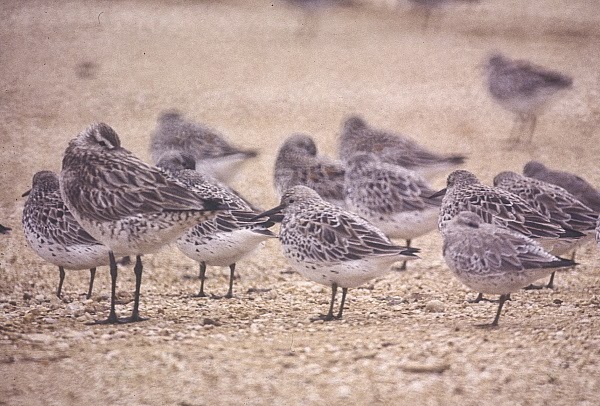 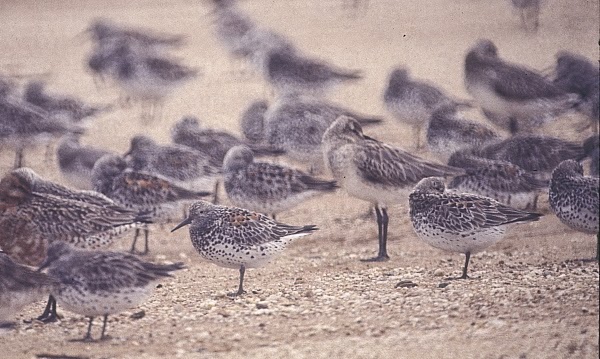 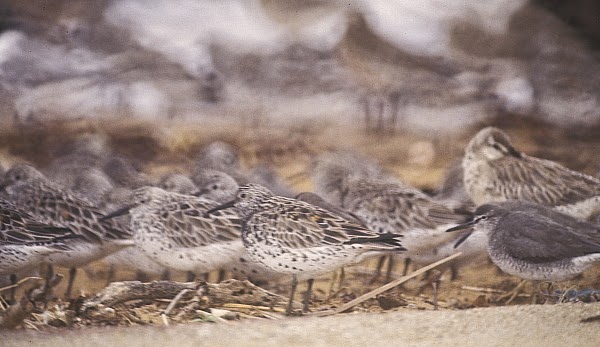 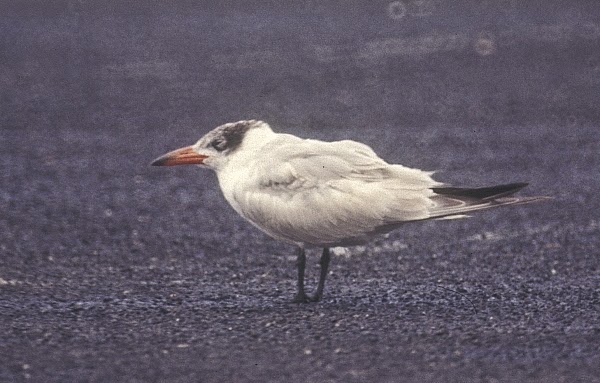 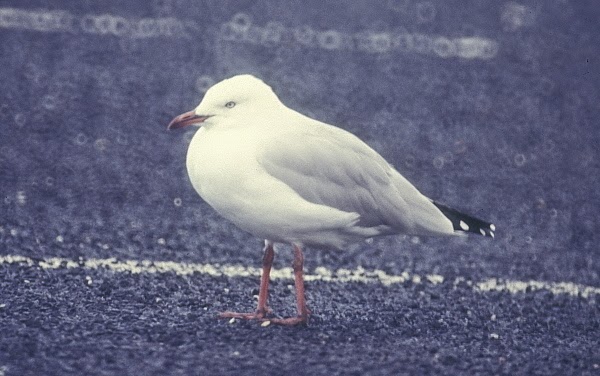 Paul was back to work for a couple of days and then had booked a flight to Cairns.  I decided to take the bus, it was quite a bit cheaper but took a day and a half and, frustratingly, I could not get a ticket for that day.  I spent two hours in Brisbane Botanical Gardens on 24 March seeing an Azure Kingfisher, 50 mostly juvenile Figbirds and 30 Grey-breasted White-eyes amongst just 12 species. I then read a big chunk of Frank Herbert’s Dune while listening to Neil Young compilation tapes. 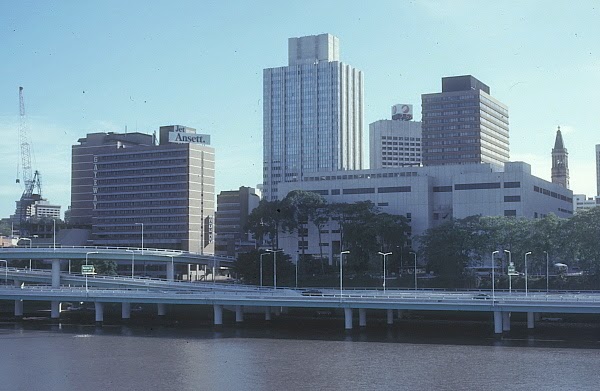 On 25 March I caught the bus north along the coast to Cairns.  I saw a few big and obvious birds from the bus but it was often frustrating getting glimpses of things I could not be sure of and some that I had no idea about.  We stopped at a garage/diner on the outskirts of Childers for an hour’s lunch break and I wandered off around some grasslands seeing 20 cute Zebra Finches and a superb male Spotted Harrier, both new for me.  We continued on to Gladstone and north through the night getting as far as Townsville by dawn and arriving feeling completely wrecked in Cairns around mid-day.