April 28th.  Before breakfast I looked around the woodland behind our motel in Show Low seeing Acorn and Hairy Woodpeckers, Ash-throated Flycatcher, Western Bluebird and Pygmy Nuthatch.

We drove southwest on Route 60 across the Mogollon Rim, into and up out of the Salt River Canyon and through Tonto National Forest towards Globe.  The bird I most wanted to see in Arizona was Olive Warbler, a mountain conifer dweller of uncertain affinities now thought to be in a family of its own most closely related to old world warblers. Before we left home I checked ebird for records and saw one from Timber Camp which was on our route.  We found Grace's and Yellow-rumped Warblers in the car park but were not quite sure where to look and decided to press on to a hopefully better site above Globe. This took a bit of finding as we initially missed the turning, and retracing our steps asked at a Forestry Office to be sure.  The road climbed initially through dry scrub, where two Gambel's Quail crossed the road, then quite steeply up into conifers and to the old miner's camp at Sulfide Del Rey. The habitat looked very good for Olive Warbler but seeing someone walking around in the woods with a crossbow was a bit disconcerting, or would have been if their girlfriend/wife hadn't been with them. Even so we thought it best to stick to the road but despite wandering around for over an hour I failed see or hear any Olive Warblers although more Grace's and Yellow-rumpeds were evident and my first Broad-tailed Hummingbird and particularly Painted Whitestarts were some compensation.  I wasn't absolutely sure we were looking in the right place and maybe would have had more success higher up - ebird is rather generic on site details.  More likely arriving on site late morning was our undoing? We retraced our steps seeing Phainopepla, male Lark Bunting, Western Tanager and Cardinal near Globe.  It was then a long drive southeast to Lordsburg, New Mexico.
April 29th.  We left Lordsburg early, seeing a male Anna's Hummingbird by the motel while loading the car.  We drove back into Arizona but hadn't gone far when we hit a rock in the road which smashed our oil tray and damaged the automatic transmission.  We were greatly helped by passing birders and particularly Jackie at the George Walker House who looked after us and helped in contacting Roadside Assistance.  I had five new birds in her yard (Blue-throated Hummingbird, Arizona Woodpecker, Red-naped Sapsucker, Bridled Titmouse and Scott's Oriole) - if one was going to break down this was definitely the place to do so! 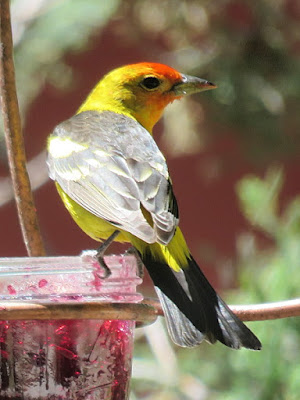 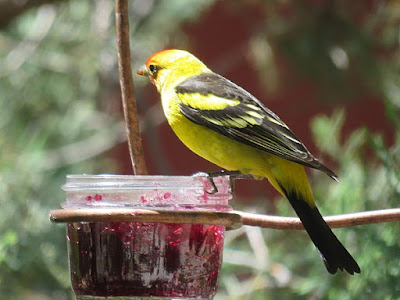 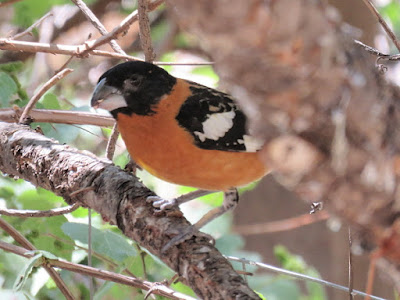 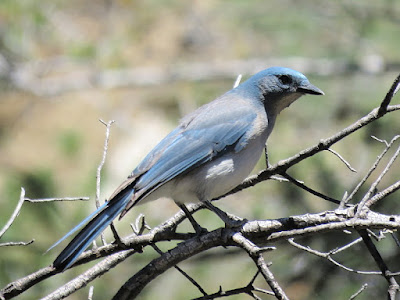 I returned to the car and David Terry arrived with a flatbed truck to 'recover' it. This was soon done but arranging what to do with it and getting us a replacement took more time.  With no clear solution evident David and his crew took us north to Bowie where he was based.  I saw several Swainson's Hawks on the way and a Greater Roadrunner sat on a post.  David made numerous phone calls from his office in Bowie and it became clear that the best option was to take us to the Alamo Office at Tucson Airport, over two hours west.  We were booked into a motel in Sierra Vista that evening which was a similar distance from Bowie, but two hours from Tucson.  The rental office in Sierra Vista was closing and although we were told we could get a replacement car there the following morning we really wanted to get sorted while we had David to help us.  We left Bowie and headed west, the last part chasing the sun which just about set before we arrived at Tucson Airport.  We were given a Dodge Chaser with California plates that presumably needed taking home. It was bigger than we were really comfortable with and was key-less, which took a it of getting used to, but it was a relief to be mobile again.  We left Tucson at about 8pm and found our motel in Sierra Vista at about 10pm.  The office was closed but Megan had phoned ahead to say we would be late and our key was waiting for us in a safety box.  It had been a long day but we were relieved to be back on schedule.
Posted by richard fairbank at 11:40 No comments:

April 26th.  We awoke to find overnight snow had settled on the mountains almost down to our elevation.  It was still sleeting when we packed the car and headed north.


﻿
We soon left Flagstaff and its mountain climate, drove past Wupatki and Cameron where we had turned towards the Grand Canyon four days earlier.  We skirted the Painted Desert and turned off towards Tuba City.  Our map showed we would be passing close to Dinosaur tracks although our guide book suggested they were not all that riveting.  They were signposted from the road and we were shown around by a local 'no fee only gratuity' guide who pointed out many things we would have overlooked and a few we remained unconvinced by.  When we finished we were informed what gratuity was expected ending in presumably him and certainly us being disappointed.  The guide book was correct in hem not being riveting but I'd not seen tracks before and did not regret going. 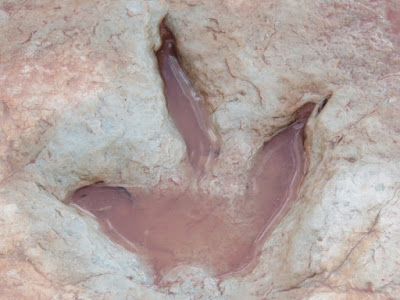 We drove on to Kayenta, turning north and passing some interestingly shaped rock outcrops before briefly crossing into Utah and heading down the road to Monument Valley.  The valley is on tribal lands and entrance was not covered by our Interagency Pass but the $20 per car rate seemed very reasonable for what was one of the most spectacular places I've ever been.  We followed the 17 mile self-guided graded road stopping regularly and taking far too many pictures as the weather slowly improved and the clouds broke up giving superb vistas.  Birds twere pretty non-existent with a Peregrine and a Rock Wren the highlights. 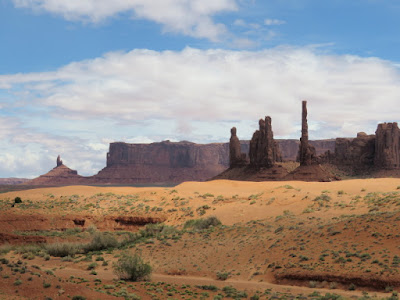 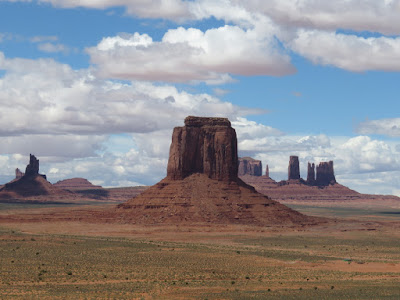 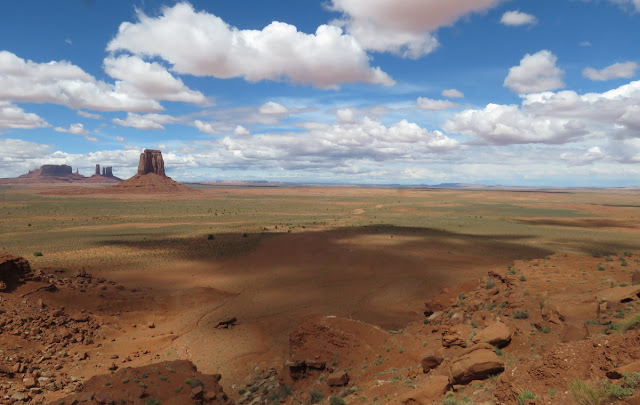 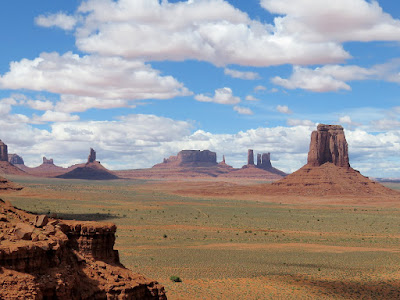 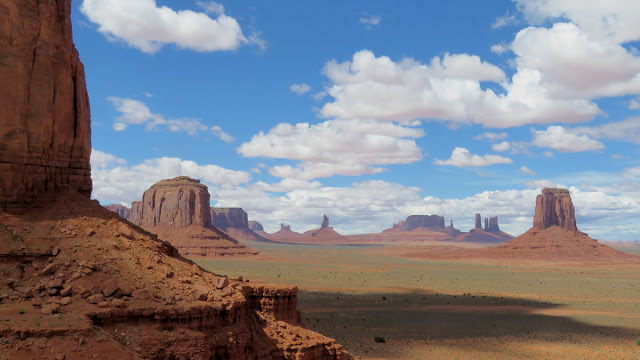 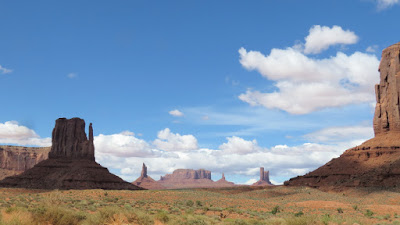 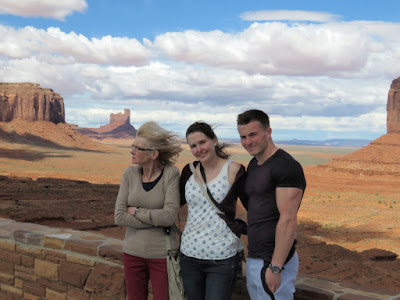 We reluctantly left Monument Valley, crossed back into Utah and continued towards Bluff.  A Prarie Falcon flying across the road  passing Mexican Hat on the way.  It was named for a rock formation but from the road it did not appear to be particularly photogenic so we kept going.  Near a boat ramp on the San Juan River just before Bluff were some petroglyphs which were much easier to find than those at Flagstaff's Picture Canyon.  They were more of them and some looked very much like aliens to us.  There were also three migrant White-crowned Sparrows in the nearby scrub and two White-throated Swifts flying around.  We stayed at the excellent La Posada Pintada in Bluff, ate in the Twin Rocks Cafe (Black-chinned Hummingbird on their feeders) and had a pleasant walk around the town. 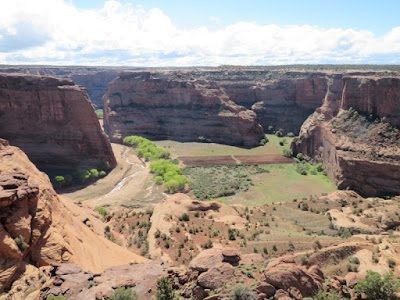 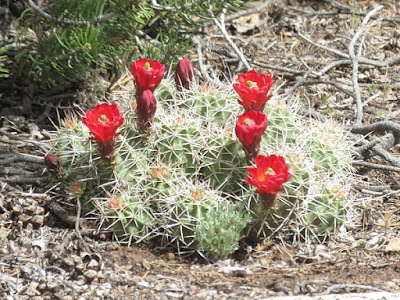 What looked like a Mountain Bluebird flew across the road as we were leaving Canyon de Chelly, it was certainly very bright blue.  We continued driving south, another 100 miles, to the Petrified Forest National Park entering from the north at the Painted Desert Visitor Centre and having a late lunch at nearby Chinde Point. 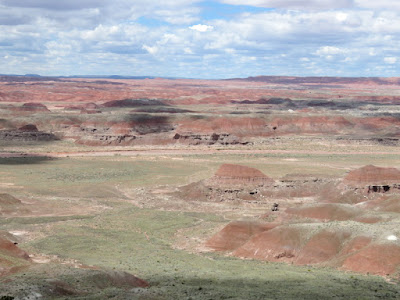 Continuing south it is about 30 miles to the southern entrance of the park at Rainbow Forest Museum.  Even though we had made excellent progress and were ahead of schedule we did not have time to stop at all the places of interest on the way although we did try most ... 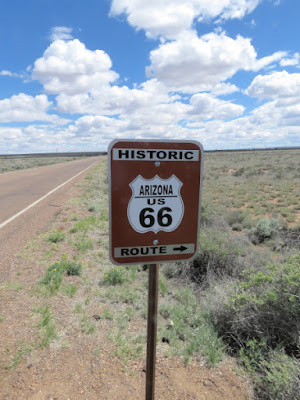 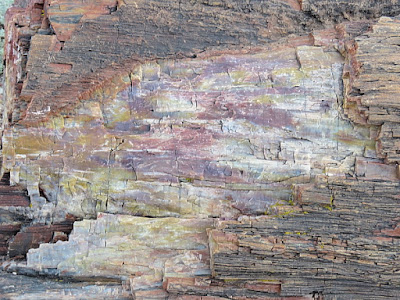 We left the Petrified Forest National Park with another 60 miles to drive to Show Low where we arrived early evening, staying in a motel set in pine woods just off Deuce of Clubs on the far side of town.  The town being named after a game of cards between co-owners of a large ranch who in 1876 played 'show low and take the ranch', the road named after the winning hand.