Saturday 30 April (continued).  We arrived at Huisun mid-late morning and spent the rest of day there seeing male Swinhoe’s Pheasant, 4 Malay Night Heron, 2 Formosan Blue Magpies and 2 Taiwan Varied Tits, the later taking most of the day to find and then remaining high in the trees making viewing difficult.  At dusk we drove for an hour to Puli where we stayed in a hotel on one of the main streets. 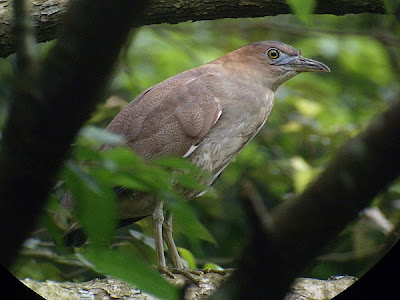 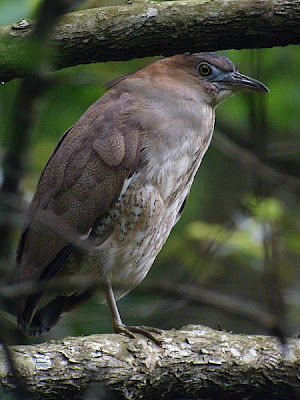 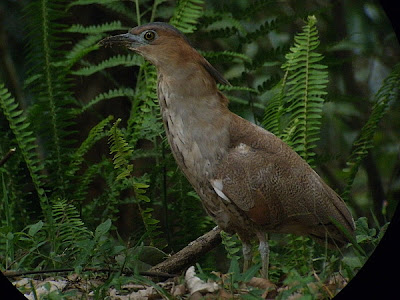 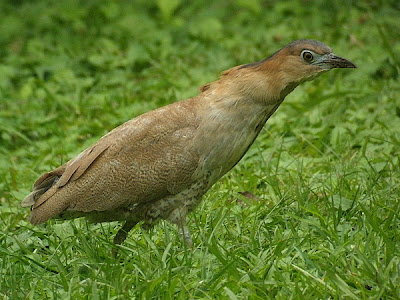 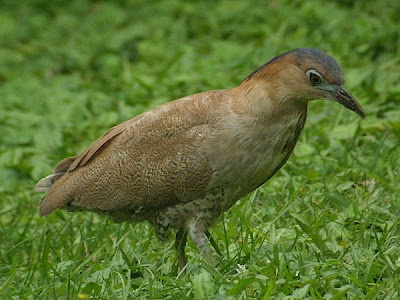 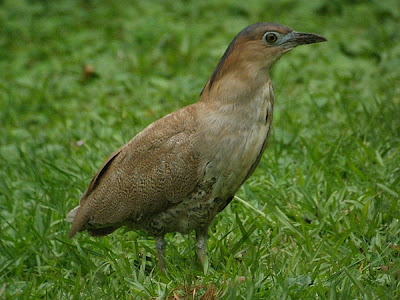 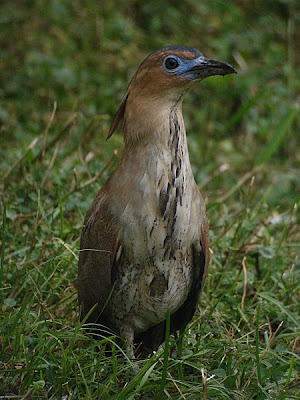 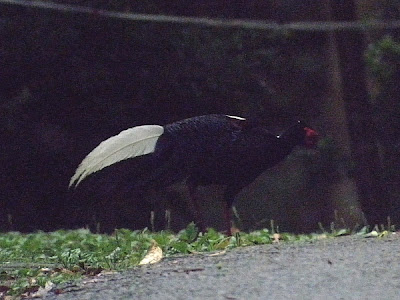 Sunday 1 May.  We returned to Beidongyuenshan for the morning seeing 2 Taiwan Hill Partridges, 2 Oriental Turtle Doves, Collared Owlet, 3 Silver-backed Needletail, Jay 1, 3 Yellow Tits, Rufous-faced Warbler, 10 Rufous-crowned Laughingthrushes, Steere’s Liochicla, 2 White-tailed Robins and a male Snowy-browed Flycatcher.  We met some Taiwanese birders who told us that the first returning Fairy Pittas were only just arriving in the south of the country but hadn’t been seen at Huben yet.  Not what we wanted to hear as Huben was our next stop!  On arrival at Huben’s Fairy Pitta Guesthouse three hours later our hopes were raised by the arrivals board listing the first pitta for 26 April, a good week later than any of the previous five years listed but at least one had returned.  However no one there knew where it had been recorded and apparently none had been seen since.  We spent the afternoon in prime pitta habitat behind the temple with no success although we did see 2 Taiwan Bamboo Partridges, Mountain Scops Owl (excellent views as it was getting dark) and Dusky Fulvetta.  After dark we established that the pitta heard on 26 April had been near the 'pitta blind', 5 minutes walk from the guesthouse, but had not been recorded subsequently.  An anxious night ensued.

Monday 2 May.  Another rollercoaster of emotions.  We were having a pre-dawn breakfast in the Fairy Pitta Guesthouse when we heard a pitta calling from down the road in the direction of the ‘pitta blind’.  We dashed down the road but it stopped calling before we got close enough to determine where it might be.  It didn’t respond to tape and all morning in the area produced nothing.  We spent the afternoon behind the temple and driving some of the smaller roads in the area looking for decent habitat.  Birds included 4 Taiwan Bamboo Partridges, female Swinhoe’s Pheasant, 2 Malay Night Heron, 3 Emerald Doves, Savannah Nightjar, Formosan Blue Magpie, 10 Taiwan Scimitar Babblers and 4 Dusky Fulvettas.  A very anxious night as we were now relying on our last day to find the pitta, a contingency added in the trip planning stage that we had hoped not to need.
﻿ 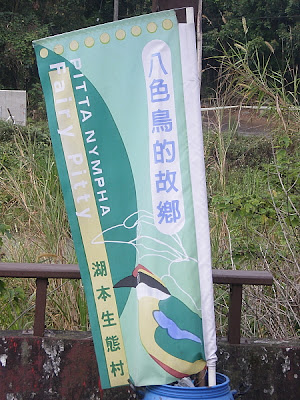 Tuesday 3 May.  We were on the road opposite the pitta blind before dawn hoping the Fairy Pitta would call again to give us a better idea of where it was.  I’d left my scope and SLR behind to be less encumbered should it be necessary to go in.  We sat with increasing anxiety for twenty minutes, past the time it had called the previous day, before it did so again.  This time it did respond and soon Barry picked out a silhouette in the top of one of the nearer trees.  It was the right shape and the right colours were discerned in the gloom before it dropped out of sight.  We walked around and got better, but still brief, views before it settled in an area in front of the pitta blind.  Here it performed off and on for two hours giving excellent views.  My only regret was only being able to take digibined photos of it.  It eventually stopped calling and we returned to breakfast relieved and elated.  The pitta had colour-rings and a radio aerial that had apparently been fitted several years before.  The area it was calling from had been a territory in previous years but not 2010.  We had the rest of the day and decided to return to Anmashan via some near coastal wetlands mentioned in a Birdfinding Guide.  We didn’t find the exact spot but beside a big river near Dali saw 4 Barred Buttonquail, Greater Painted-Snipe, Black-browed Reed Warbler, male Pin-tailed Whydah!!, 2 Pechora Pipits and 6 Black-faced Buntings.  The last few hours of the day at Anmashan produced Chinese Hwamei and 3 Vinous-throated Parrotbills at km 4 and 2 Rusty Laughingthrushes (good views at last), 5 White-eared Sibias and 2 Taiwan Yuhinas at km 23.  Returned to Novotel and an early morning flight home. 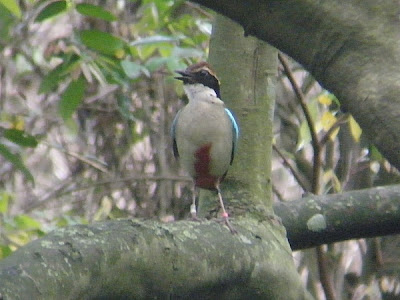 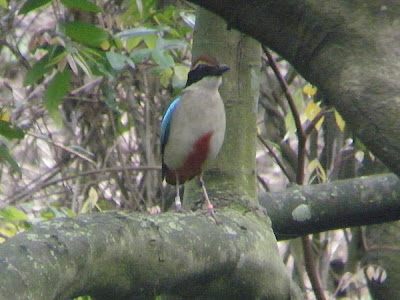 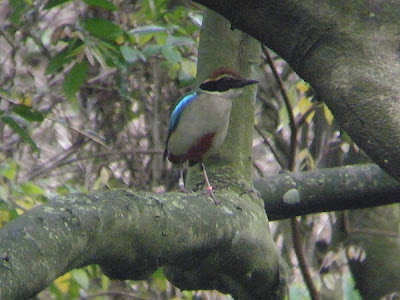 Posted by richard fairbank at 14:52 No comments:

Wednesday 27 April (continued).  We drove north to Wulu and finished the day on the Old Forest Road.  It climbed very steeply through what looked like recently cleared agricultural land before becoming more forested.  The mixed habitat made it an excellent area for Chinese Bamboo Partridge, we saw 10, along with Yellow Tit, 5 Black-necked Scimitar-Babblers, Taiwan Whistling Thrush, White-tailed Robin and 4 Little Buntings.  Steve got us another good deal at Wulu's only hotel, the rather posh Chief Spa. 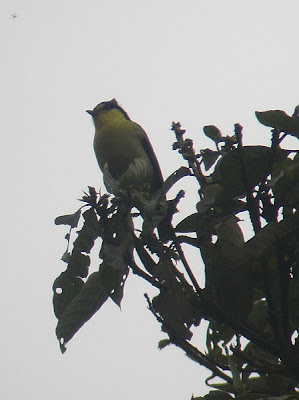 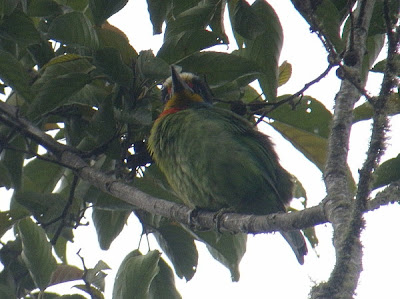 Thursday 28 April.  We birded around the hotel at Wulu seeing a pair of Red Orioles, 6 Formosan Blue Magpies and 7 Taiwan Whistling Thrushes before driving on to Siangyang.  Siangyang was at a higher elevation and on the trails we saw Besra, Taiwan Wren-Babbler, 2 White-whiskered Laughingthrushes, 2 Steere's Liochiclas, 6 Taiwan Barwings, Flamecrest, 2 Taiwan Shortwings, 2 Collared Bush-Robins and male Taiwan Vivid Niltava.   No pheasants or partridges was disappointing but we'd arrived later than would have been ideal.  We continued along the Southern Cross Island Highway to find a tunnel through the mountains closed - collapsed due to an earthquake some years before but not marked as such on the tourist map we'd picked up at the airport.  There only alternatives were to go north and through the Taroko Gorge again or back towards Kenting and around the southern tip of the island.  We chose the latter – a section of road we were now becoming far too familiar with - and got as far as Fangliao by early evening.  With nowhere to stay on the main road we decided to go into town but directions to supposed hotels were very vague and nowhere was apparent.  We found the station and decided to hire a taxi to show us the way.  We followed it back to the main road and on no more than two kms to an obvious motel we would have found if we’d kept going, although it was a minor detour compared to our recent zig-zag progress around southern Taiwan! 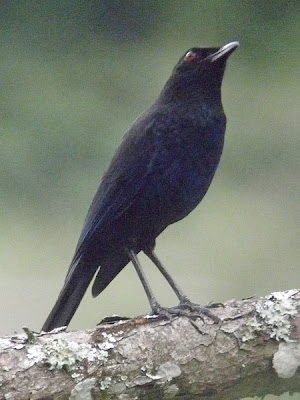 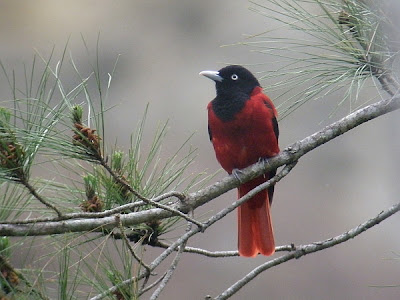 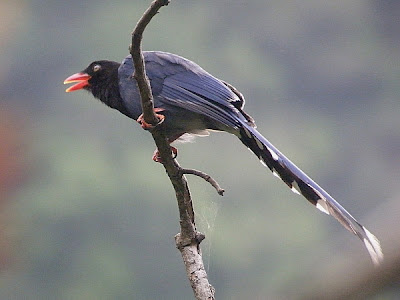 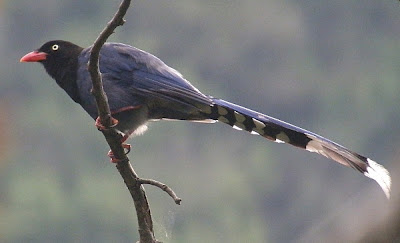 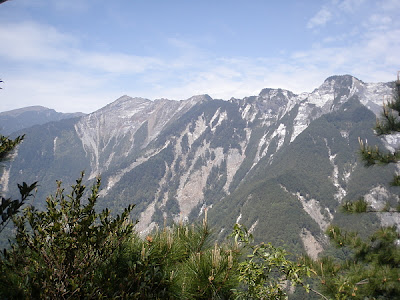 Friday 29 April.  We left Fangliao early and drove to Alishan stopping in a few bits of reasonable habitat on the way but seeing nothing of note with a migrant Yellow-browed Warbler best.  We found a cheap guesthouse near the park entrance and drove on to Yushan spending the afternoon in the Paiyun Visitor Centre/Big Hemlock area which was excellent for passerines.   Here we saw 5 Yellowish-bellied Bush Warblers, 2 White-whiskered Laughingthrushes, 2 Steere's Liochiclas, 8 Golden Parrotbills, 5 Flamecrests, 2 Taiwan Shortwings, 3 White-browed Bush-Robins, Collared Bush-Robin, 2 Ferruginous Flycatchers and 6 Grey-headed Bullfinches. 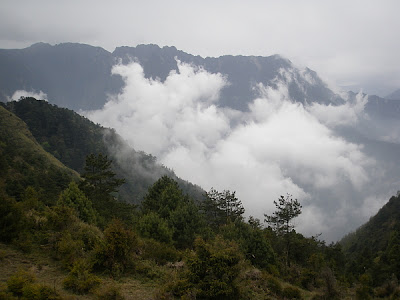 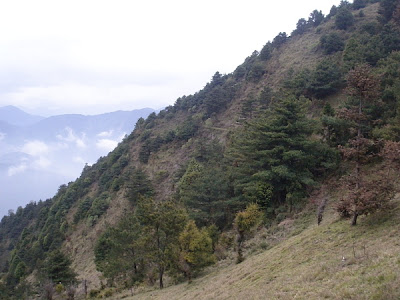 Saturday 30 April.  We left Alishan at dawn to drive to Huisun and stopped at the km 132 rest area as we were leaving Yushan.  Birds here included 2 Taiwan Bamboo Partridges, Black Eagle, 6 White-bellied Pigeons and 5 White-whiskered Laughingthrushes. 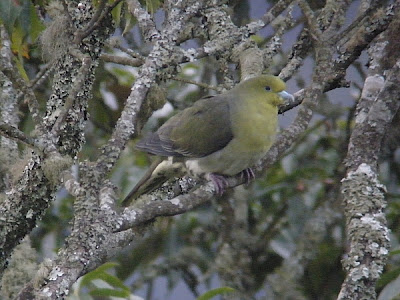 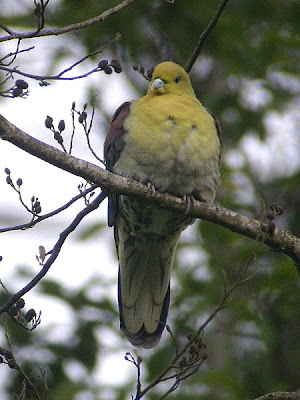 Posted by richard fairbank at 13:39 No comments: