Another week in Shoreham (13-20 January)

Wednesday 20 January. Another miserable day. Megan and I took Cookie to Harbour Way, walked along the south side of the Adur to the Adur Ferry Bridge and back by the boardwalk, Shoreham Fort and Sailing Club. Despite the low tide few gulls were seen with nothing of any interest amongst them. There were more kite-surfers than birds off-shore with a flock of 13 Brent Geese, 2 unidentified auks and 4 Gannets flying east. A few distant waders from the Ferry Bridge weren't worth closer inspection, nothing at the Fort and 2 Turnstones by the Sailing Club. Maybe not a great day birdwise but NO MORE TRUMP!!!

Tuesday 19 January. I left home at 07:00 and was at New Salts Farm at 07:15. It was very dark and squally but I was able to overlook the Dog's Trust field from the car. At 07:30, with it still being close to pitch black, the Barn Owl appeared in front of me. I quickly exited the car and watched it for 17 minutes as it flew low around the field, often at the back and sometimes briefly behind the brambles, before flying west over the road, presumably to roost. It was good to have such a lovely bird as subject for my repaired camera although even at 07:47 the light was very poor. Flushed with success I headed to Shoreham Fort but there was no sign of the Iceland or Caspian Gull despite looking around the area for a couple of hours. With the gate to the harbour arm open I tried a short seawatch from the end seeing 2 Great Crested Grebes on the sea, 35 unidentified auks and 46 Gannets flying east and 2 Kittiwakes, 55 unidentified auks and 2 Razorbills flying west. Another check through the gulls at Harbour Way failed to produce the goods and a look through at the not very many gulls on the Adur on the way home was no more successful with 2 Grey Plover and 7 Redshank little compensation. 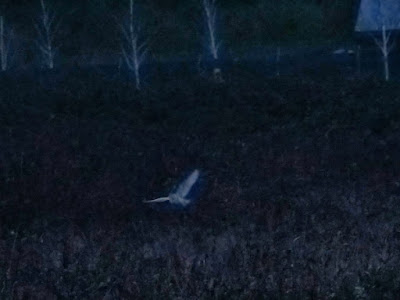 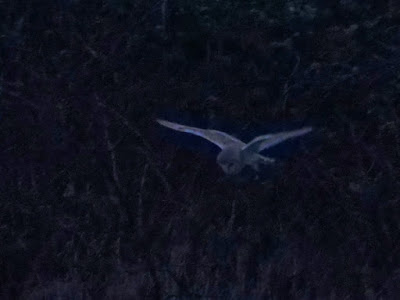 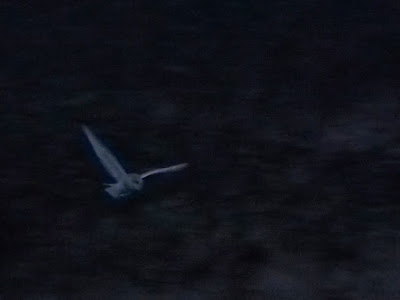 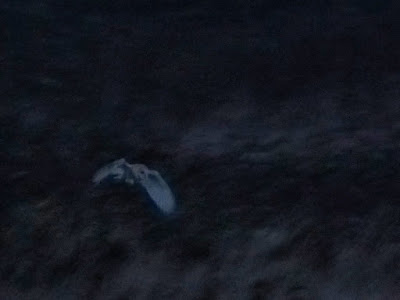 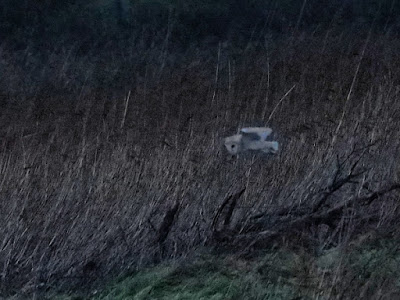 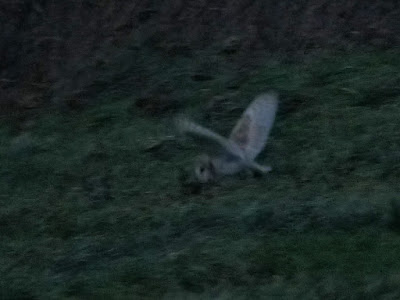 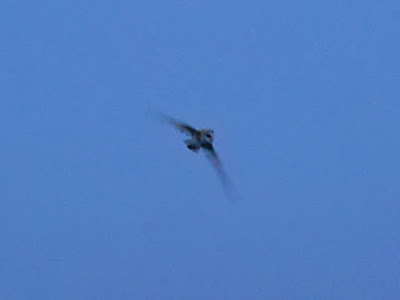 Monday 18 January. Megan and I took Cookie to Mil Hill. I recorded 23 species but few were notable - a Peregrine on a distant chimney, 16 Blackbirds, 2 Song Thrushes and single Sky Lark, Long-tailed Tit and Greenfinch. Relaxing at home a WhatsApp message that a Barn Owl had been seen hunting by the Dog's Trust at New Salts Farm on previous evenings had me heading there. Unfortunately I didn't hear the ping for the next message, sent just after I'd left home, that there was an Iceland Gull on at the Harbour entrance by Shoreham Fort. It would have taken priority but I failed to look at my phone until I'd been at New Salts Farm for 10-15 minutes, missing a couple of further pings in the process. The Iceland Gull had disappeared, there was a Caspian Gull there. It seemed too late to dash although if I'd been thinking straight I would not have misinterpreted a final message that it was back to mean the Caspian when it was obviously about the Iceland. AAGH, though probably still not enough time as my car was five minutes away. At New Salts Farm I saw my first Sparrowhawk of the year and a Stonechat but the Barn Owl never showed. Disappointing, but being retired there is usually tomorrow ...

Sunday 17 January. The wind had gone around to the NW and it was very clear. Widewater log (08:25-10:05): Oystercatcher 4E, Kittiwake 2W, unidentified auk 225E:980W, Razorbill 6E:13W:9o/sea, Red-throated Diver 5E:13W:4o/s, Gannet 36E:24W, Cormorant 8E:38W and Peregrine off-shore. Also a Kingfisher was at the eastern end of the lagoon. The Peregrine was spotted being harassed by about 15 Herring Gulls and was watched for several minutes trying to shake off the gulls while hunting low over the sea. On three occasions as it presumably attempted to stoop, from quite a low height, onto an auk a resulting splash suggested the auk had escaped underwater. Stopping at the Adur on the way home I saw 2 Grey Plover, 7 Redshank and few gulls.

Saturday 16 January. In a strong SW wind and heavy rain I sheltered as best I could in hut 62 at Widewater seeing just 2 Turnstones on the beach and 4 Gannets west. Harbour way was no better with nothing of note amongst 120 or so Herring Gulls.

Friday 15 January. Megan and I took Cookie to Lancing Ring car park and walked around Steepdown. We saw Red Kite, Kestrel, 11 Sky Larks, a female Stonechat, Meadow Pipit, 5 Goldfinches and 8 Corn and 10 Reed Buntings. Back home in the evening my repaired camera lens had arrived. Great to have it back, as good as new, but after breaking it (a fall of 15 inches onto a carpet) I'm handling it as if it is made of eggshells. 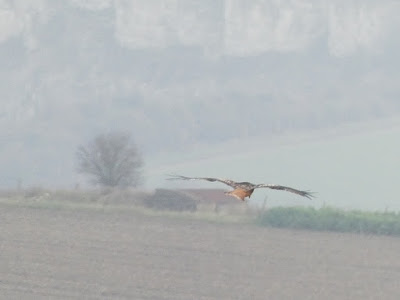 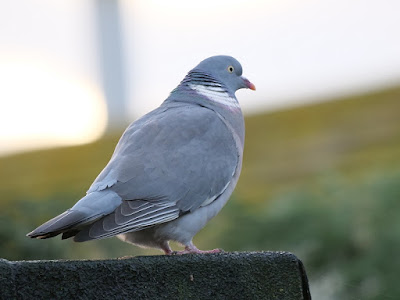 Wednesday 13 January. Megan and I took Cookie to Widewater and we walked along to Lancing Beach Green and back. We saw 2 adult Mute Swans (last year's youngster having been encouraged to leave home), Teal, 8 Little Grebes, 2 Oystercatchers, 57 Ringed Plovers and 113 Dunlin roosting by Eastern Sands, Grey Heron, 3 Little Egrets and a Kingfisher. Megan had to go into town so we stopped at the Adur Rec and while she did so I took Cookie to the Adur saltings viewpoint seeing 49 Teal, the Curlew, 2 Common Snipe, 16 Redshank, the Greenshank and a Reed Bunting.

Posted by richard fairbank at 17:49 No comments:

The following lists and gives links to the relevant blogs of all the foreign birding (and some family) trips that I have been fortunate enough to have done. It is ordered by year with the most recent first. Blogs of the older trips use scanned slides, some having degraded badly with age, or digitised prints of varying quality. Some use photos taken by those I was with. These are usually easy to tell as they are significantly better than mine and in most cases are acknowledged. Many of the older blogs are based on my unreliable memories where my notes are very lacking in detail, other than the birds seen, something I now greatly regret. The blogs were initially done to find a 'home' for boxes of old slides which I had not looked at for years, my dad giving me his slide scanner providing the necessary impetus to digitise them. Doing these blogs has brought back many very happy memories, and a few sad ones. I’ve been very fortunate in having various like-minded friends whom I have usually been able to travel with. Sadly an increasing number are no longer with us. The Covid-19 Lockdown has given me the opportunity to fill in all remaining gaps so, until I can travel abroad again, all my trips are included below.

Posted by richard fairbank at 08:40 No comments:

Tuesday 12 January. Megan and I took Cookie for a walk around the Adur seeing just 2 Teal, 8 Oystercatchers, 11 Redshanks, 2 Ringed Plover and some uninspiring gulls. Better news was that my broken telephoto lens had been repaired and will hopefully be back with me at the end of the week. I've missed it, not that there has been much recently to use it on. 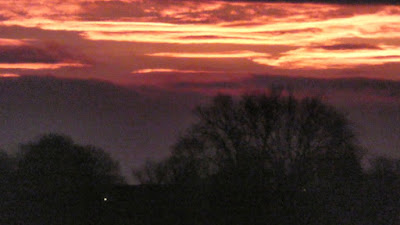 Sunday 10 January. Despite it being quite foggy there were a lot of people out on Sunday morning. I cycled to Shoreham Sailing Club and Shoreham Fort seeing 17 Brent Geese, 5 Ringed Plovers, 10 Turnstones, 2 Purple Sandpipers (success on my seventh attempt), 4 Gannets, 22 Cormorants, Black Redstart, 4 Greenfinches and David Buckingham. On the Adur on the way home I saw a Grey Plover, 12 Ringed Plovers and 11 Dunlin but very few gulls. 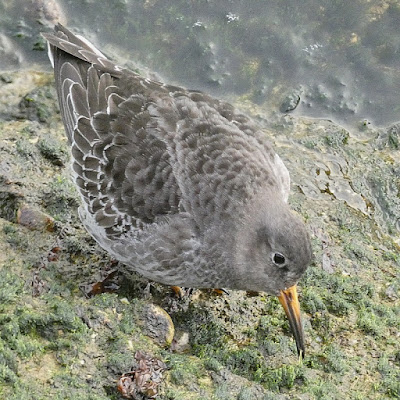 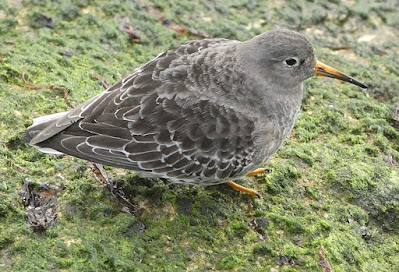 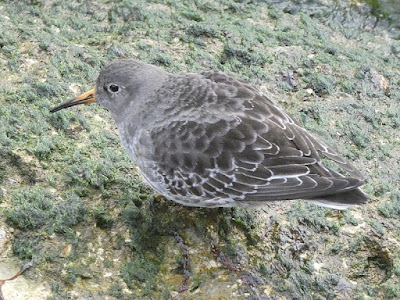 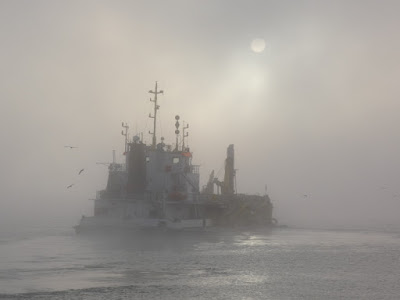 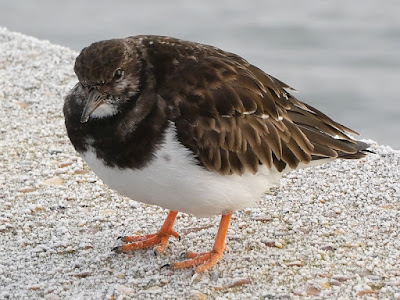 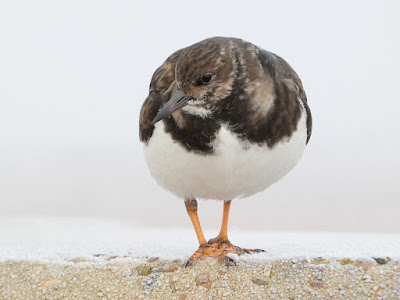 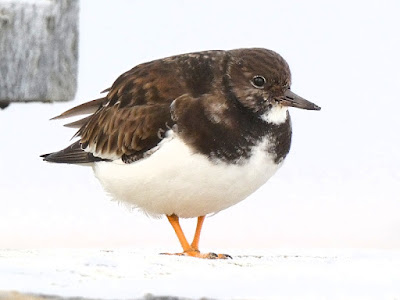 Saturday 09 January. Megan, Nessa and I took Cookie up to a very frosty Mill Hill. At times we were in low cloud, although the river looked foggy too. It was very atmospheric and I could almost imagine being back in the Himalayas 40 years ago. Unfortunately the Himalayan feeling didn't extend to the birds seen - 10 Blackbirds, 9 Redwings, a Song Thrush, 8 Robins, 2 Meadow Pipits, 30 Linnets (my first of the year) and 5 Goldfinches. With the lens of my camera in for repair and my old Olympus SX60 misbehaving I'd ordered a Lumix bridge camera as a backup a couple of days ago and was pleasantly surprised when it arrived after we returned home.

Friday 08 January. Megan and I drove to Dacre Gardens with Cookie, crossed the Adur and walked up to Bramber and from there up to the Beeding Hill car park and back down the South Downs Way. We saw 18 Fieldfares, 9 Redwings, 10 Blackbirds, Song Thrush, 4 Stonechats, 16 Meadow Pipits and 2 Corn Buntings.

Thursday 07 January. I cycled down to Shoreham Beach where impressive numbers of auks, gulls and Gannets were feeding at some distance offshore to my east, presumably on a large shoal of fish. I moved east in small increments but didn't get any closer, or improve the light. If anything birds were moving further away and after half an hour I cycled to Shoreham Fort but the shoal was no longer in view with just a few stragglers remaining. I estimated I saw at least 1850 auks (on the sea and constantly flying east) although only identified 7, all Razorbills, the rest were too distant or against the sun. Also around the shoal were 400 Herring Gulls, at least 300 Gannets and a flock of 66 Cormorants. A flock of 7 White-fronted Geese appeared over the beach and headed inland, 2 Great Crested Grebes and 5 Red-throated Divers were on the sea. A Kingfisher flew under the Adur Ferry Bridge as I was crossing and the Adur produced 6 Oystercatchers, 40 Lapwings, 2 Grey and 29 Ringed Plovers, 11 Turnstones, 3 Dunlin, 10 Redshank, 100+ Herring Gulls, 3 Little Egrets and 7 Meadow Pipits.

Wednesday 06 January. I cycled to Brighton for a dental appointment seeing my first Greenfinches of the year alongside Southwick Canal on the way and a Shag and 6 Cormorants on outflow by Southwick Power Station. Later I took Cookie for a walk to Shoreham Fort/Boardwalk seeing a Kingfisher, Dartford Warbler, Black Redstart and 7 Greenfinches. The Dartford thanks to sharp-eyed Tim and Jenny Holter who happened to be looking when I walked past.

Tuesday 05 January. I cycled around Shoreham, mainly hoping to see yesterday's Caspian Gull again. I did, on the Adur by the airport on my first port of call, but only briefly. I saw it, scoped it, confirmed it and then foolishly went for my phone to put out news rather than my camera to digiscope it. I immediately realised my error when after texting I looked back and found it had gone. With no image did it really happen? I checked the Adur up as far as A283, and cycled back down to Coronation Green and across the Adur Ferry Bridge. I continued along to Lancing Sailing Club and then to Shoreham Fort before returning home somewhat tired. During the morning I saw 2 Egyptian Geese (near Botolph's), 52 Teal, 17 Oystercatchers, 4 Grey Plover, 21 Ringed Plover and 24 Dunlin (on the beach at Eastern Sands), Kingfisher (Dacre Gardens), a first-winter Yellow-legged Gull (Harbour Way), Red Kite (Botolph's), 70 Gannets, a Fieldfare, 45 Redwings, 6 Song Thrushes, 20 Blackbirds, 2 Stonechats (Botolph's) and 5 Goldfinches. The thrushes were feeding along the Downslink. No big groups of gulls were present but a quite distinctive but very rough looking Herring-type by Ricardos had (and still has) me scratching my head.

Posted by richard fairbank at 17:51 No comments: