This is the final posting covering a trip to the Tibetan Plateau with Jon Hornbuckle, Ashley Banwell, Ed Dickinson, Phil Heath and Barry Wright and guided by Jesper Hornskov. It is based on my scant notebook entries, unreliable memories and a report Jesper produced. Most of the photos included are digitised prints I took although a few were kindly provided by Barry and Jon. We had arrived in Nangqian, our base for a three day visit to Kandar Shan pass and gorge, the last major site to visit before the long drive back to Xining.

01 July 2000. We spent most of our first day on Kandar Shan La and the grassy slopes above it, Jesper's site for our main target (and the only remaining speciality) Kozlov's Bunting. They were quite easy at the right place and I saw 10 (6 males and 4 females). Job done, trip successful! Other birds seen included 5 Himalayan Griffons, Lammergeyer, 2 Rosy Pipits, 2 Brown and 8 Alpine Accentors, 6 Blue-fronted Redstarts, 5 River Chats, a superb male Grandala, flight views of a Wallcreeper, 10 Chough, 8 Hodgson's and 6 Brandt's Mountain Finches, 5 Red-breasted Rosefinches and 50 Blue Sheep. On our return to Nangyen we stopped to look in fields by the Mekong River where I saw Golden Eagle, 2 Hoopoes, 3 Grey-backed Shrikes, 2 Rock Sparrows and 2 Scarlet and 50 Pink-rumped Rosefinches. 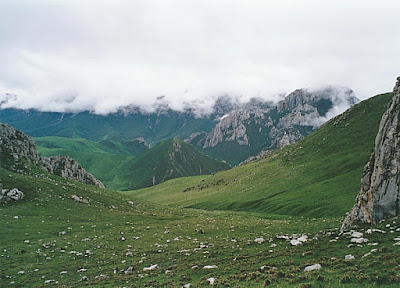 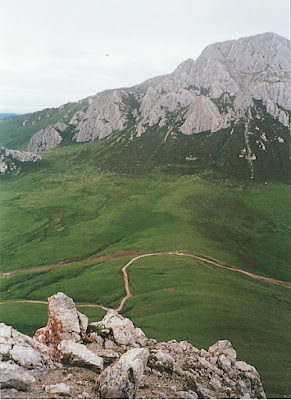 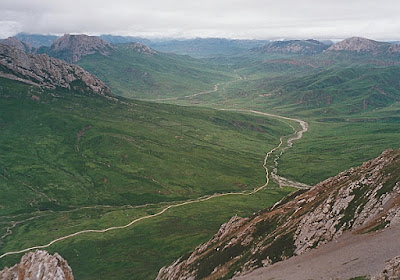 02 July 2000. We turned our attention to Kandar Shan gorge and the valley opposite where we spent most of the day. Here we were rewarded with a good selection of species but an out of range Black Drongo was the only addition to the trip list. As well as the drongo I saw 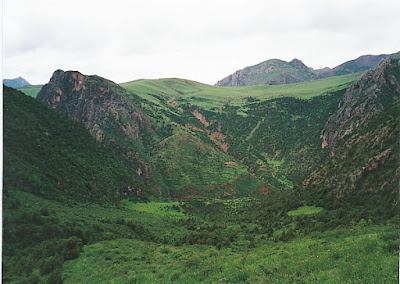 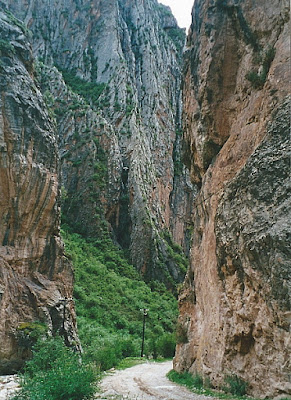 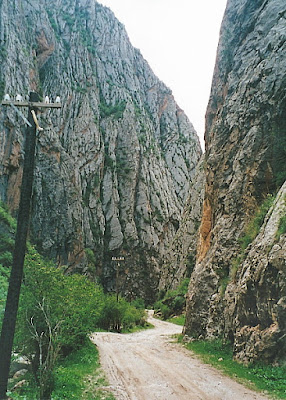 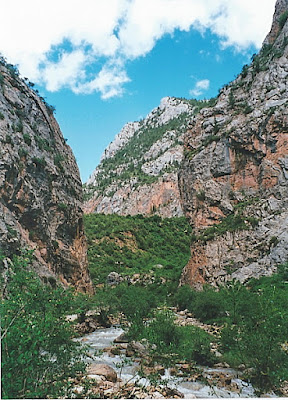 03 July 2000. We had five days to get back to Xining for our flights to Beijing but as we'd seen pretty much everything possible Jon and Ash were keen to get back to Xining early to enable them to fly to Chengdu and visit Lhasa, not an option for the rest of us. All being well with the roads it was possible to do the journey in four days with a few stops which seemed a reasonable compromise and gave the rest of us a chance to revisit Dong Xia and Xining Bei Shan. Today we had a long drive back to Yushu but still had time for a few roadside stops along the way, starting with a detour to Kandar Shan La for a last quick  look at Kozlov's Bunting. I saw one male. Other birds seen during the day included 8 Ruddy Shelduck, 42 Himalayan Grifons, 2 Lammergeyers, a Saker, 3 Black-necked Cranes, 2 Ibisbill, 15 Snow and 66 Blue Hill Pigeons, 7 Cuckoos, Little Owl, 19 Hoopoes, 3 Long-billed Calandra Larks, 4 Citrine Wagtails, Dipper, 8 Rufous-breasted Accentors, 2 Tibetan Rubythroats, 6 Blue-fronted and a male Hodgson's Redstart, 5 River Chats, 10 Kessler's Thrushes, 10 Kessler's Thrushes, 6 Stoliczka/s Tit-Warblers, White-browed Tit, 17 Hume's Groundpeckers, 2 Alpine and 250 Common Chough, 2 Daurian Jackdaws, 2 Rufous-necked and a White-rumped Snowfinch, 3 Twite, an Eastern Great and 15 Beautiful Rosefinches and 11 Godlewski's Rock Buntings. 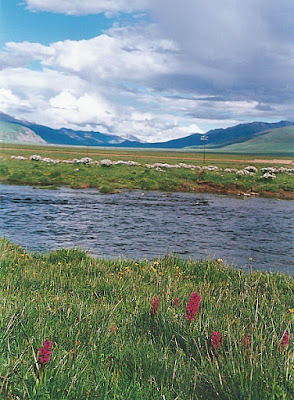 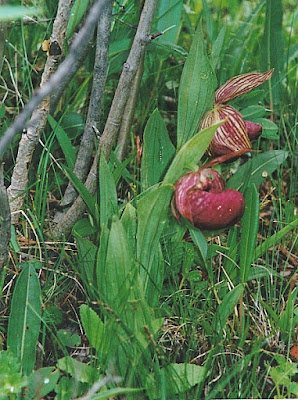 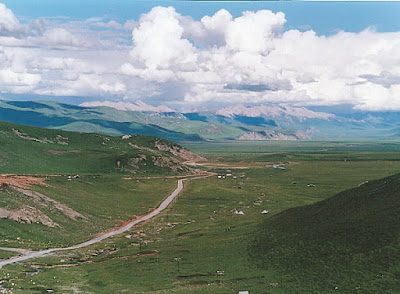 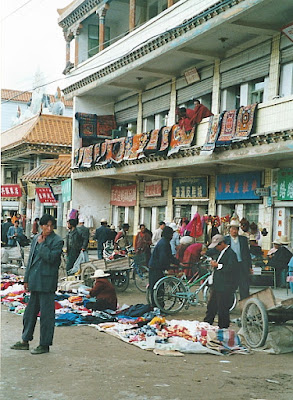 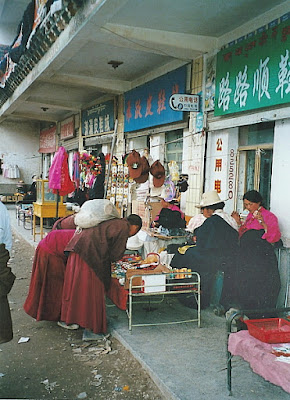 04 July 2000. We made steady progress back towards Xining reaching Maduo after brief stops at Bayanka La and Dayematan. As we were travelling through open country for most of the time and I was in the front I tried my best to keep track of the number of each species that I saw. Counting raptors on telegraph poles was easy but passerines more difficult and many remained unidentified. Birds recorded included 30 Bar-headed Geese, 50 Ruddy Shelduck, 4 Himalayan Griffons, Lammergeyer, 133 Upland Buzzards, 6 Black-necked Cranes, flocks of 41 and 55 Lesser Sandplover, 11 Wood Sandpipers, 6 Little Owls, 16 Saker, 7 Long-billed Calandra and 46 Shore Larks, 44 Hume's Grounpeckers, 3 Dippers, 2 Brown and 6 Robin Accentors, male Tibetan Rubythroat, 95 Black, single Hodgson's and Guldenstadt's and 3 Blue-fronted Redstarts, 16 Kessler's Thrushes, 7 Tickell's Warblers, a pair of White-browed Tits at a nest, 11 Rufous-necked, 6 White-rumped and 3 Black-winged Snowfinches, 2 Brandt's Mountain Finches and 5 Eastern Great Rosefinches. We also saw 2 Tibetan Wolves, a heard(?) of 42 Kiang and 20 Tibetan Gazelles. Not at all bad for a travel day.

05 July 2000. Another travel day, we drove with few stops, including a pass at 4460m, to Wenquan where we stayed in the same/only motel in town. Birds seen included 57 Ruddy Shelduck, 24 Himalayan Griffons, 53 Upland Buzzards, 4 Lesser Sandplover, 2 Saker, a Long-billed Calandra , 5 Hume's Short-toed and 40 Shore Larks, 23 Hume's Grounpeckers, 31 Black and 4 Guldenstadt's Redstarts, 19 Rufous-necked, 5 White-rumped, 6 Henri's and a Black-winged Snowfinch, 25 Brandt's Mountain Finches and a male Roborovski's Rosefinch.
06 July 2000. We left Wenquan and made several stops on the way to Xining. First Er La where we saw Tibetan Snowcock and 5 Roborovski's Rosefinches, then dropping down off the plateau through The Gorge where a male Wallcreeper was seen in the same place as the female we'd seen there early in the trip. We finished in fields near Gonghe where we added Black-faced Bunting to the trip list. Other species seen during the day included 18 Upland Buzzards, 2 Little Owls, 3 (plus 2 in cages)  Mongolian, 3 Crested and 40 Shore Larks, 30 Hume's Groundpeckers, 2 Brown and 4 Robin Accentors, 86 Black and 4 Guldenstadt's Redstarts, 5 Isabelline and 3 Desert Wheatears, 3 Rock Thrushes, 11 Rock Sparrows, 3 Rufous-necked, 5 Henri's and 5 Black-winged Snowfinches, 2 Hodgson's and 3 Brandt's Mountain Finches, Mongolian Desert Finch, and an Eastern Great Rosefinch. Back in Xining the hotel's restaurant was "out of order", and so we settled for a hamburger and ice-cream down the road - something I much preferred anyway. 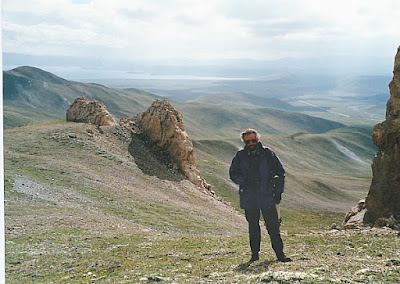 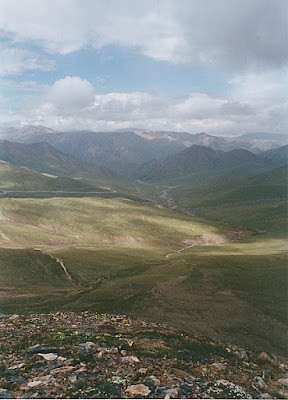 07 July 2000. We said a sad goodbye to Jon and Ash who were returning to Xining Bei Shan for Prezevalski's Partdige before being driven to Lanzhou airport to fly to Chengdu and then Lhasa (as it turned out a four hour search was unsuccessful). They had been great companions and Ash had certainly found a few birds we might not otherwise have seen, most particularly Prezvalski's Redstart. Jepser took Barry, Ed, Phil and me back to Laoye Shan and Dongxia for the day. The weather was a distinct improvement on our previous visit and Chinese Leaf Warbler was a new bird for me. Other highlights were Rufous-breasted Accentor, 5 Siberian Rubythroats, Himalayan Bluetail, 5 White-throated Redstarts, 5 Yellow-streaked, 25 Greenish, 5 Gansu and a Hume's Leaf Warbler, a male Stoliczka's and 8 Crested Tit-Warblers, single Pere-Davids and Elliot's Laughingthrushes, a pair of breeding Przevalski's Nuthatches at a nest hole, 4 Songar and 6 Rufous-vented Tits and 5 White-browed Rosefinches. 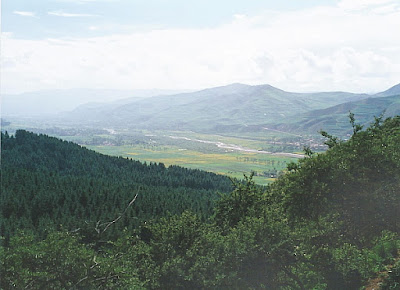 08 July 2000. We had a final morning at Xining Bei Shan but had no more success in Przevalski's Partridge than our earlier visit, or Jon and Ash the previous morning. One was heard distantly but had stopped calling before we could move in and the habitat wasn't easy to 'beat'.  Before having to leave for the airport I saw 2 Daurian Partridges, 4 Common Pheasants, 6 Cuckoos, an Eagle Owl, 4 Crag Martins, 3 Pied Wheatears, 7 Rock Thrushes, 15 Chough, 3 Pale Rosefinches and 3 Godlewski and 2 Meadow Buntings. We left Phil in Xining where he had an extra couple of days due to Jon telling him to book his flight on the wrong date. Phil had the last laugh as he revisited Xining Bei Shan and eventually saw Przevalski's Partridge. Jesper, Barry, Ed and I flew back to Beijing for a final night and according to Jesper celebrated the end of a fine trip by having another grand dinner at our hotel.... I'm in full agreement about it being a the fine trip and one that has brought back happy recollections many times since.

09 July 2000. I saw 7 Azure-winged Magpies on the drive to Beijing airport and 2 Oystercatchers at Schipol.

Posted by richard fairbank at 12:33 No comments: