Local seawatches and a skywatch (21-26 March)

Saturday 26 March. David Buckingham and I visited Greentrees Farm and walked through to Pond Bay. It was an area David had seen a Lesser Spotted Woodpecker in recent years and I'd looked unsuccessfully more than once ten or more years ago, but approaching from a different direction. Needless to say no LSWs today [note to self: think carefully before trying here again]. I did see 2 Stock Doves, 4 Buzzards, 3 Great Spotted and a Green Woodpecker, Jay, 3 Marsh, 2 Coal and lots of Blue and Great Tits, 7 Goldcrests, 4 Nuthatches, 2 Treecreepers, c50 Redwings, Brambling and Redpoll heard and several Siskins. We continued east on a narrow road and unexpectedly came across Brian, Graham and Jon watching from a small pull in. We joined them and in a couple of hours saw at least 3 Goshawks (they ended up on 5), several Buzzards and a Raven. No sign of the parakeets this afternoon but it turns out they were photographed flying over Selsey this morning. I'll miss seeing them locally although they've become a bit erratic recently and I wondered if they might have polished off all the buds on their favoured tree. Bon voyage! 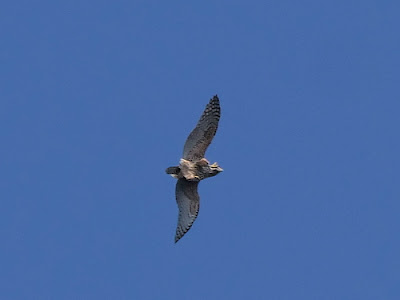 Friday 25 March. A very quiet seawatch at Widewater from 06:00 was quickly terminated at 07:20 with local WhatsApp news of a drake Garganey on the Adur by the Old Toll Bridge. It didn't seem like the sort of place it would stay but I thought it worth a try as the seawatch had only produced 2 Great Crested Grebes, 13 Oystercatchers and 14 Black-headed and 9 adult Mediterranean Gulls. The Garganey had moved on so I went home, collected Cookie and we walked from Dacre Gardens to Botolphs and Coombes and back, seeing a single Buzzard and Chiffchaff. Later I took Cookie to Park Avenue but we failed to see either parakeet.

Thursday 24 March. I seawatched at Widewater from 06:10-08:10, no ARK this time. I saw 9 Brent Geese, 2 Teal, a Common Scoter, single Red-necked and Great Crested Grebes, 2 Oystercatchers, 97 Black-headed, 19 Common and 4 Mediterranean Gulls and an unidentified diver. Most birds were flying east although the Red-necked Grebe was on the sea. It was too distant to see any yellow on its bill but close enough to see the red neck and white face clearly. Very pleasing as I'd not seen one anywhere for over four years. I watched it for 5 minutes or so before being distracted by some passing gulls and couldn't then refind it although Matt Palmer did a couple of hours later. Four Teal were on the lagoon with 2 adult Mute Swans at the eastern end and 2 juveniles west of the causeway. After a quick and unproductive stop at the Adur I met Megan and Cookie at Mill Hill. There we saw Peregrine, 2 Jays, Skylark, 2 Chiffchaffs, 12+ Blackbirds, 9 Dunnocks, singing Chaffinch and Greenfinch and 7 Linnets. 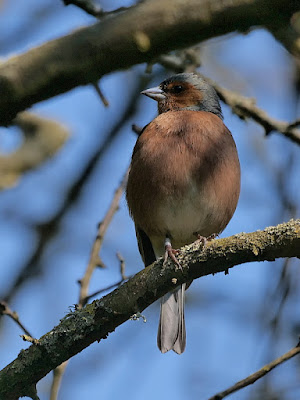 Wednesday 23 March. I arrived at Widewater at 05:55, only 20 minutes behind ARK this time and having seen the Lord Derby's Parakeet on the way. Passage was a much quieter and up to 09:10 I saw 122 Brent Geese, 2 adult Mute Swans, 8 Common Scoter, 6 Great Crested Grebes, 8 Oystercatchers, 88 Black-headed, 15 Common and 8 Mediterranean Gulls, 7 Sandwich Terns, a winter-plumaged Red-throated Diver and 3 Gannets. Most were heading east. Megan and Cookie joined me and we walked along to Lancing Beach Green hoping for a Wheatear or two but only seeing 3 Mute Swans on the sea, 3 juveniles on the western part of the lagoon and 2 adults . A tea-time walk with Cookie to look for the parakeets was equally unsuccessful.

Tuesday 22 March. Having learned from yesterday, I seawatched at Widewater, arriving at 06:15 to find Alan Kitson had been at hut 32 for half an hour and had already seen 130 Brent Geese. I watched to 09:15 and another 655 Brent Geese went east as well as 51 Pintail, 2 probable Teal, 54 Common Scoter, 2 Great Crested Grebes, 10 Oystercatchers, an early Whimbrel, 2 Kittiwakes, 46 Black-headed, 12 Common and 8 adult Mediterranean Gulls, 4 Sandwich Terns and 4 Gannets. Two Great Crested Grebes drifted west and a Meadow Pipit came in. Most of the birds were fairly distant and bright sunlight didn't help with identification. To that end I saw what I thought were 9 Garganey. At 07:45 a flock of 6 flew W and dropped onto the sea to be immediately lost and not seen again, initially I put them down as probable but at least one looked like a male as it dropped onto the sea. Two Garganey came by with 8 Pintail at 08:10 and finally a probable with 4 Pintail at 08:44 which I learned had been identified as a Garganey at Goring by Nick Bond. Matt Palmer saw 8 Garganey with 8 Pintail at Hove which were most likely my 6 on the sea having joined the later 2 and 8 Pintail. Back home I took Cookie to Southwick Canal where we saw the long staying Long-tailed Duck although it wasn't close. In the afternoon we visited the allotment where both the Ring-necked and Lord Derby's Parakeets flew over calling. I'd not seen them on recent late afternoon walks with Cookie, we were probably going too early?

Monday 21 March. Our garden fence came down in February's Storm Eunice and today it was being replaced. I stayed in to be sure everything was OK, it was so Megan and I took Cookie to the Adur. There was saw 9 Lesser Black-backed Gulls, Sparrowhawk, 3 Little Egrets, 3 Skylarks, 4 Meadow Pipits and 2 Linnets. I had been confident that seawatching would be poor, a serious misjudgement with Garganey seen all along the coast. I've yet to work out why one day is better than another with seemingly similar weather. The only way to be sure is to be there.

Posted by richard fairbank at 16:45 No comments:

My second Wheatear - a Desert (20 March)

Sunday 20 March. Megan and I took Cookie to Cissbury seeing Green Woodpeckers, 3 Kestrels, Long-tailed Tit, 2 Skylarks, Chiffchaff, 2 Linnets, 2 Goldfinches and 2 Yellowhammers. News of a male Desert Wheatear had me anxiously driving to Goring Gap in Sunday afternoon traffic and I was delighted to join a small group watching it on the beach. A stunning bird. 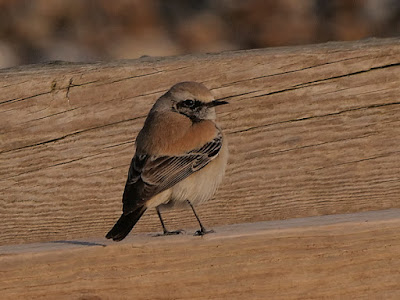 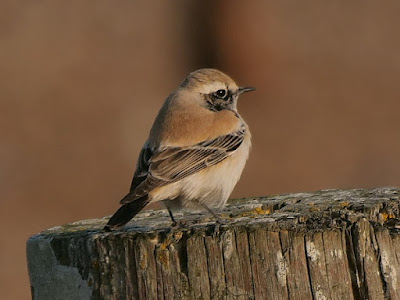 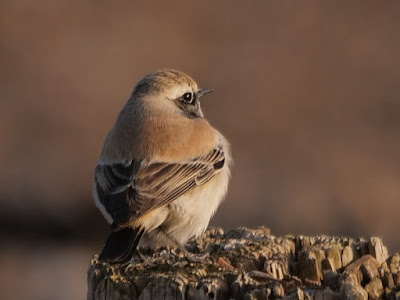 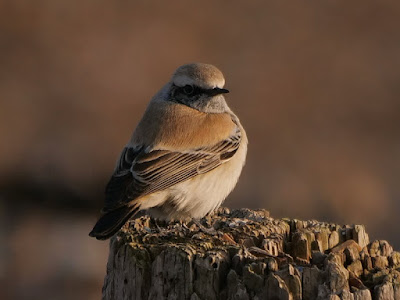 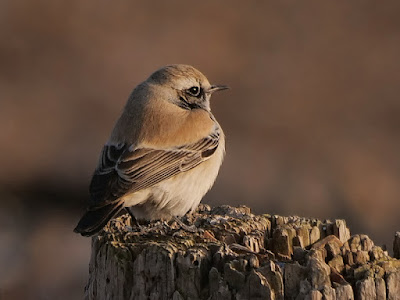 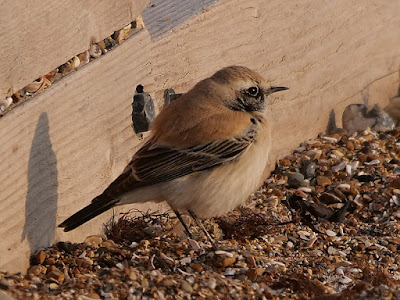 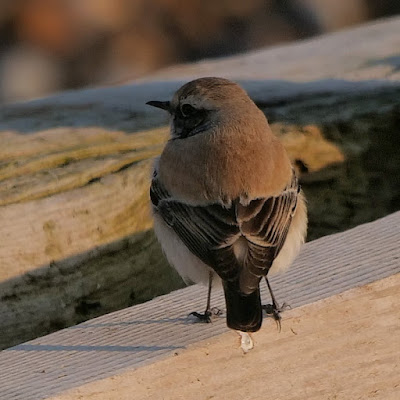 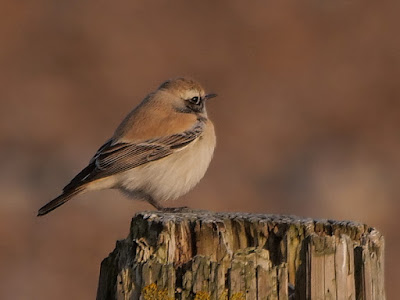 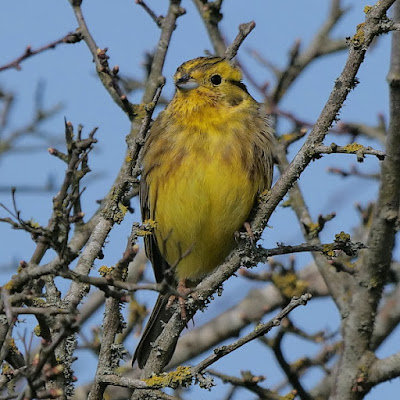 Saturday 19 March. I seawatched at Widewater from 06:50-08:30 seeing 4 Shoveler, 3 Common Scoter, 2 Oystercatchers, 7 Kittiwakes, 2 Fulmars and 40+ Gannets. Megan and I then took Cookie to Steepdown. In a brisk wind we saw 6 Stock Doves, Red Kite, 3 Kestrels, Chiffchaff, 9 Skylarks and 7 Corn Buntings.

Friday 18 March. Cookie and I met David Buckingham at the Beeding Hill car park and walked SE along the Monarch's Way, up to Truleigh Hill and back around Room Bottom. Highlights were 2 Sparrowhawks, 3 Buzzards, Peregrine, 7 Skylarks, Chiffchaff and Goldcrest heard, Fieldfare, 6 Meadow Pipits, 20 Chaffinches and 2 Yellowhammers.

Thursday 17 March.  I seawatched at Widewater from 06:50-08:20 seeing 39 Brent Geese, 14 Common Scoter, 4 very distant Eider (3 were males), Red-breasted Merganser, 3 Great Crested Grebes, an adult Mediterranean Gull, an unidentified Diver, 2 Fulmars and a Gannet. Nothing was seen along the lagoon. I met Megan and Cookie at Mill Hill where we saw 2 Buzzards, Kestrel, Jay, 2 Long-tailed Tits, singing Chiffchaff, 2 Mistle Thrushes and 2 Linnets. A late afternoon  visit to the Adur with Cookie produced an adult and a second-summer Mediterranean Gulls and both Ring-necked and Lord Derby's Parakeets were seen at Park Avenue on the way home.

Wednesday 16 March. I seawatched at Widewater from 07:00-08:30 seeing Red-breasted Merganser, Great Crested Grebe, 2 adult Mediterranean Gulls, my first Sandwich Tern, Guillemot, 2 Red-throated Divers and a Gannet.  A walk along the lagoon added 2 Teal and 2 more Mediterranean Gulls. Another poor local seawatch put in context by John and Dave Cooper, who returned to Birling, seeing 3 flocks of Garganey totalling 20 birds! I met Megan and Cookie and we walked around the Adur seeing Sparrowhawk, Greenfinch, 5 Linnets and 2 Goldfinches. The tide was too high for any gulls or waders. Both Ring-necked and Lord Derby's Parakeets were seen at Park Avenue with Cookie late afternoon. 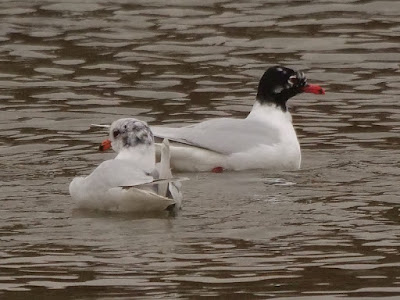 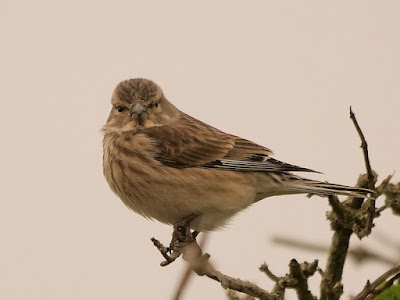 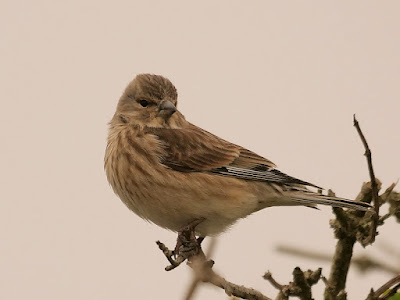 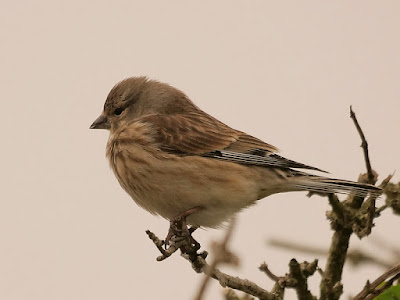 Tuesday 15 March. An early message from Dave Cooper, who was down from Unst, to say he and John would be  leaving Burgess Hill shortly to seawatch from Birling had me heading that way. I arrived at 07:10 to join them and RAB. The seawatch was fairly quiet, and took a bit of getting used to the height above the sea having switched my allegiance to Seaford at least 25 years earlier. In almost 3.5 hours I saw 3 Canada Geese, 2 Shelduck, 6 Pintail, 44 Common Scoter, 3 Red-breasted Mergansers, 4 Great Crested Grebes, 4 adult Mediterranean Gulls, 35 Red-throated and 2 unidentified Divers, 15+ Fulmars and a Harbour Porpoise. Rather disappointing but it was well worth the journey to see John in the field again and have a good chat with him and Dave. I quick wander around a few sites produced 2 Peregrines, Raven, Skylark, 2 Stonechats and 8 Meadow Pipits. 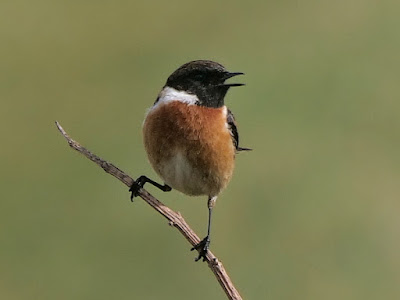 Posted by richard fairbank at 23:17 No comments:

The first male Wheatear of the year is perhaps my most eagerly anticipated regular birding event. My earliest to date have been:

09 March 1977: My earliest ever Wheatear was a male along the coast west of Ventnor on the Isle of Wight. It remained for several days (I also saw it on 11/12th) and was easily the highlight of a four-week residential Accountancy course (a career path I quickly gave up on).

Monday 14 March. I seawatched at Widewater from 07:15-08:15 seeing a distant unidentified duck (Pintail?), 2 single Common Scoter, 4 Kittiwakes, 20 Common Gulls, 3 Red-throated Divers and 9 Gannets. All were flying east. A Little Grebe was on the lagoon and 14 Turnstones and the elusive wintering Black Redstart on the groynes west of the beach huts. I met Megan and Cookie at Harbour Way and we walked along the river to the Adur Ferry Bridge and back along the boardwalk to the Fort. Halfway there I received a message that a Wheatear had been seen at the Fort making me wish we'd done our walk in reverse! There were 12 Turnstones below the wooden jetty and, still there although not immediately obvious, a male Wheatear on the Fort itself. We also saw 6 Wall Lizards at the base of the southern fortifications. 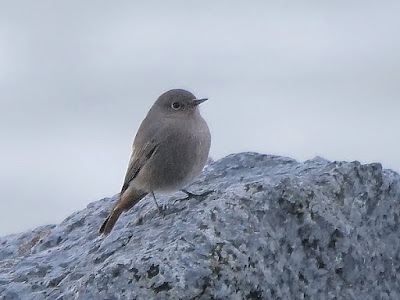 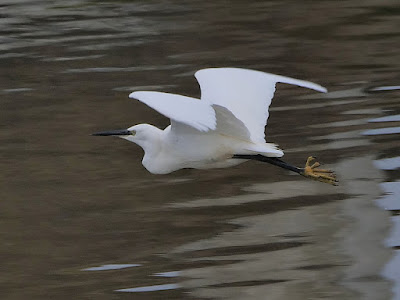 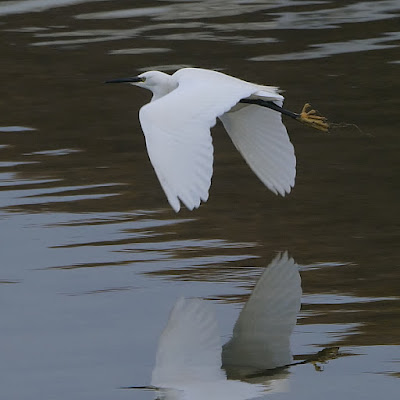 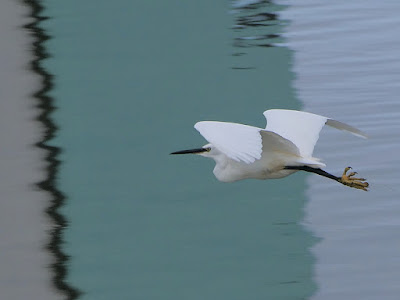 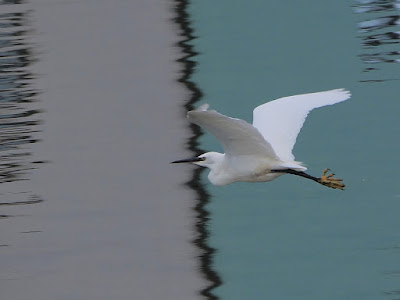 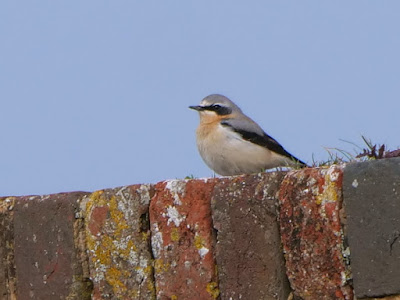 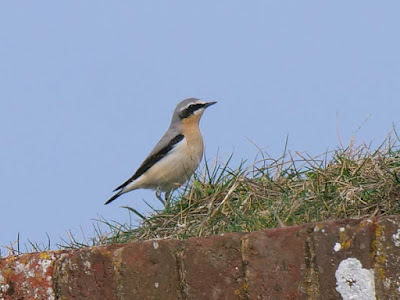 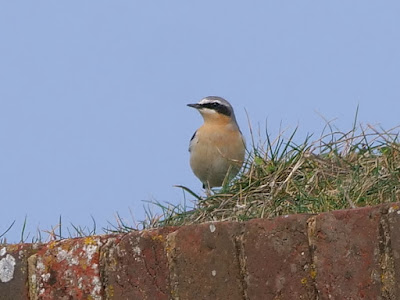 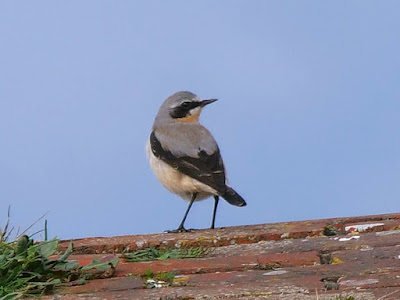 Sunday 13 March. Back home Megan and I took Cookie to Park Avenue where both the male Ring-necked and female Lord Derby's Parakeet were present.

Monday 07 March-Sunday 13 March. Megan and I took Cookie to Deal for a week where we rented a cottage by the sea. It was nice to get away but birding, what little I did, was disappointing. It was ideally placed for seawatching, could scope it quite well from the front room, except clear sunny weather made the light looking east awful. Very little was passing when I did look compared to passage off Sussex at that time. I wondered if birds continued east into the English Channel after passing Dungeness or if they continued up the Kent coast whether they passed beyond the Godwin Sands (3 miles off Deal). While at Deal we drove to Sandwich to visit Richborough Roman Fort but it was closed for major renovation. Perhaps our most enjoyable outing was catching a bus to St Margarets at Cliffe and walking back along Saxon Shore coastal path. Otherwise we stayed local to Deal. While away I saw 35 Brent Geese, Red-breasted Merganser, 28 Great Crested Grebes, a few Kittiwakes, 12 Mediterranean Gulls, 11 Red-throated and 5 unidentified Divers, 8 Fulmars, 18 Gannets, a Sparrowhawk, 6 Buzzards, Chiffchaff and 43 Chaffinches. 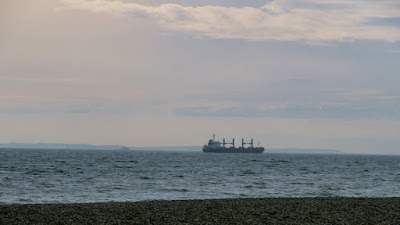 Posted by richard fairbank at 17:34 No comments: