Sunday 24 September. A rare visit to Beachy made worthwhile by two Firecrests (at Shooter's Bottom and Birling Lane) but otherwise little different from recent days at Mill Hill and hardly worth the extra effort of driving there. In 8 hours, including one at Crowlink, I saw 6 Buzzards, 4-5 Sparrowhawks, Merlin, 2 Peregrines, Great Spotted and Green Woodpeckers, 2 Sand Martins, 950 Swallows, 200 House Martins, a Rock and 145 Meadow Pipits, 4 Yellow, a Grey and 3 Pied Wagtails, Whinchat, 17 Stonechats, just a single Wheatear (!!!) and Whitethroat, Blackcaps, 31 Chiffchaff, the 2 Firecrests, 3 Goldcrests, 2 Spotted Flycatchers, 5 Ravens, 40 Goldfinches and 60 Linnets. Good to see Tonty Cook and Alan Kitson there. I called in at Arlington on the way home. Not my favourite place, a view not changed by this visit. I saw a Barnacle, 350 Grey Lag and 1000+ Canada Geese, a Dunlin and 2 Common Sandpipers. No sign of any Little Stints although a full-sized stripey young Great Crested Grebe pestering a parent was nice. 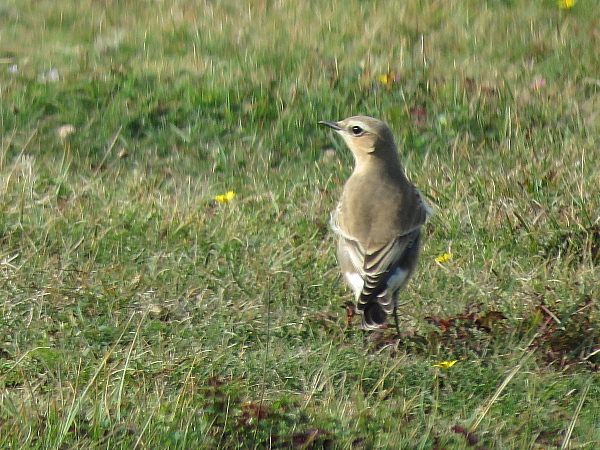 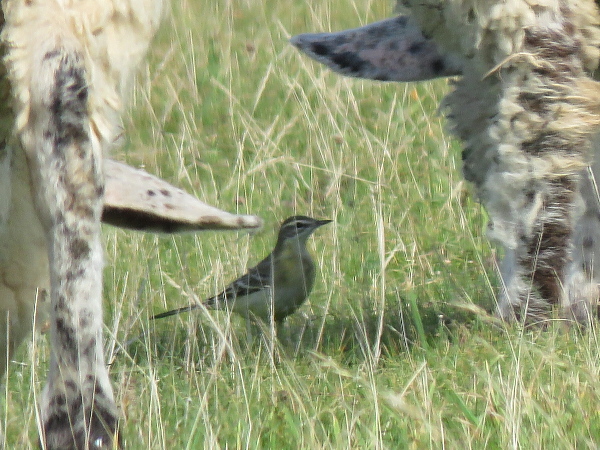 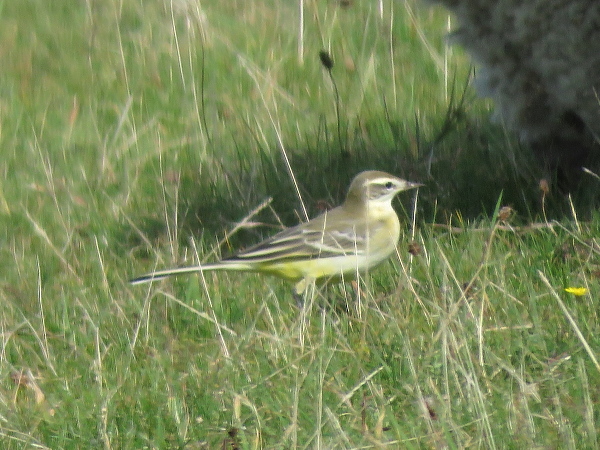 Posted by richard fairbank at 22:41 No comments:

Tuesday 19 September. A Peregrine on Southwick Power Station as I cycled to work.

Monday 18 September. A Peregrine on Southwick Power Station and a Wheatear by Hove Lagoon as I cycled to work.

Sunday 17 September. Eight hours at Beachy mostly with John King produced single Marsh Harrier, Hobby, 5 Sand Martins, 500 Swallows, 2000+ House Martins, 4 Yellow and a Grey Wagtail, Redstart, Whinchat, 3 Wheatears, 8 Whitethroats, Lesser Whitethroat, 6 Blackcaps, 16 Chiffchaffs, Goldcrest and Raven. This makes it sound better than it was as I was wondering why I'd made the effort to drive to Beachy when I could see almost as much at Mill Hill!

Tuesday 12 September. An early visit to Mill Hill with Cookie where migrants were a lateish Swift, single Swallows, Reed Warbler, 2 Whitethoats, 7 Blackcaps and 8 Chiffchaffs. Later 2 Wheatears at Shoreham Fort and 16 Dunlin and a Kingfisher on the Adur. 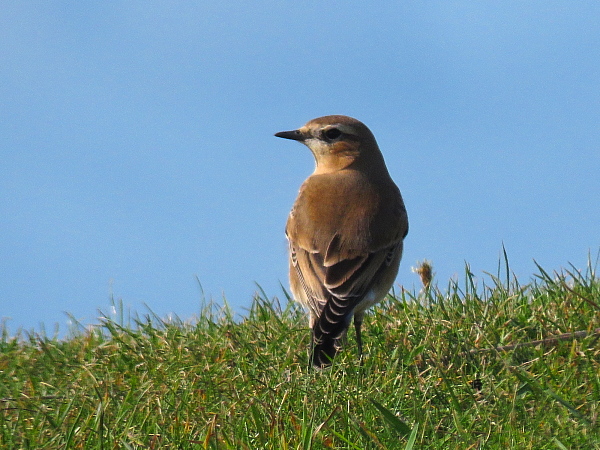 Sunday 10 September. An early visit to Mill Hill with Cookie where migrants were 3 Swallows, 2 Whitethoats, 12 Blackcaps and a Chiffchaff. Also 2 Jays. I then went to Arundel WWT where I bought an Opticron MM4 travel scope and took it to Pulborough RSPB to try it out on a Ruff and Green Sandpiper. Not a bad piece of kit.

Posted by richard fairbank at 17:06 No comments:

Saturday 2 September. Megan and I spent the first week of September staying in a mobile home on a camp-site at Drancourt, just outside St. Valery-sur-Somme. It was to be the third year running we had spent a week there at this time of year having previously visited the same week in 2012 and for a couple of days in September 2014. We boarded the Cote d'Albatre at Newhaven for the four hour crossing to Dieppe, the third year running we had taken this route. A juvenile Yellow-legged Gull was flying around in the harbour and a dark morph Arctic Skua chasing Kittiwakes off Seaford Head but other than 100+ Gannets and a single Sand Martin overtaking us as it headed south the crossing was quiet. Views of the Seven Sisters and Beachy were excellent as usual but looking into bright sunlight I felt photos could wait until we returned. We docked at Dieppe, seeing a Shag on the harbour arm, and it was an hour drive up the coast to Drancourt. We checked into our mobile home and headed for the local supermarket. France being an hour behind us meant it was light to gone 20:30. As usual there were a few birds around the campsite and in the open fields behind but the highlights were seen from our veranda, 6 Continental Coal Tits and a Short-toed Treecreeper in the pines opposite.
Sunday 3 September. In the morning we followed a circular Petite Route that passed by the campsite. It took us through some woodland we had not been in before but it was virtually birdless. Later we walked around St Valery and to Cap Hornu overlooking the Somme Bay. where at least 1000 Shelduck were visible on the rising tide and 2 adult Yellow-legged Gulls on mudflats opposite St Valery. A male Hen Harrier was present in the fields behind Drancourt and the only flava Wagtails and Whinchat seen on the trip were in fields nearby. Migrants seen included 7 Wheatears, 4 Blackcaps and 6 Willow Warblers and a Short-toed Treecreeper was again in the pines.

Monday 4 September. A walk around Drancourt before breakfast produced 2 ring-tail Hen and a male Montagu’s Harrier hunting over the adjacent farmland although the latter too quickly moved on. The former flushed 6 Grey Partridges and a Crested Tit was seen in the line of conifers I had recorded them intermittently on previous visits. The 6 Continental Coal Tits reappeared by our veranda as did another Crested Tit and a/the Short-toed Treecreeper. After breakfast we drove into St. Valery and caught the train around the bay to Le Crotoy seeing a Great White Egret, 2 Spoonbills, 20 Grey Partidges and lots of shooting pools along the way. It was high tide revealing the huge flock of 1000+ Shelduck but little else while a Wheatear and 2 Willow Warblers were along the seafront. Similar birds were recorded on the return journey while later a male Redstart and one of the Hen Harriers was seen during our evening walk. 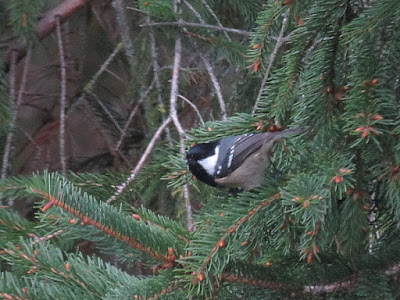 Tuesday 5 September. A trip to Amiens was largely uneventful and we managed to dodge most showers while at either end of the day a few migrants were around Drancourt including Garden Warbler and Spotted Flycatcher. A male and ring-tail Hen Harrier, 8 Grey Partridges and the only Curlew of the trip were seen in/over the fields and the Crested Tit showed again from the veranda with a Short-toed Treecreeper there and another elsewhere on the site. 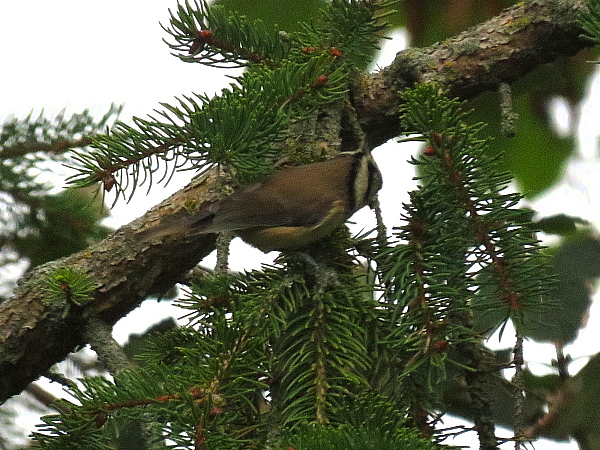 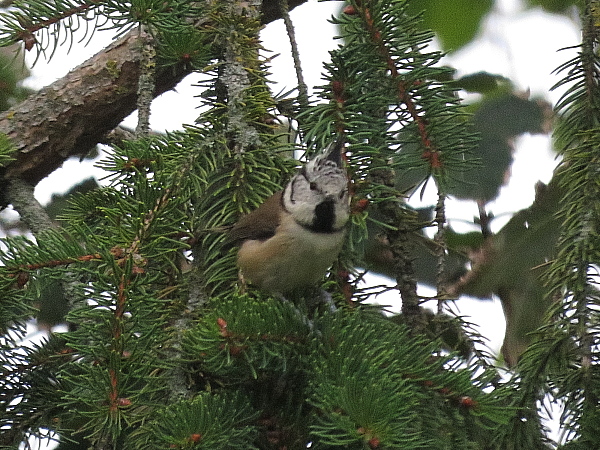 Wednesday 6 September. Birds at Drancourt included Firecrest, Marsh Tit and Short-toed Treecreeper. We then headed for the reserve at Marquenterre, stopping briefly at roadside pools just north of Le Crotoy. I had seen Spotted Crake, Black-winged Stilt and White Stork here on previous visits but water levels were high. That presented no problem for 2 Great White Egrets although a single Water Rail on the only patch of mud was more of a surprise. Marquenterre was good although is not really set up for birders – not opening until 10:00, access limited to 3 paths with limited viewing between hides that are designed for as many dwarfs and giants as those of average height. Despite this and a lot of visitors (most without binoculars) we saw Common Crane (a bird present for at least its third year), White Stork, 4 Cattle Egrets, 300+ Spoonbills, Grey Phalarope, 8 Little Stints, 2 Black Terns, a Swift and 2 Crested Tits. We also saw 4 Marsh Harriers in the general area but a search of the pines around the car park failed to produce any more Crested Tits, the first time I’ve failed there in 5 or 6 visits. 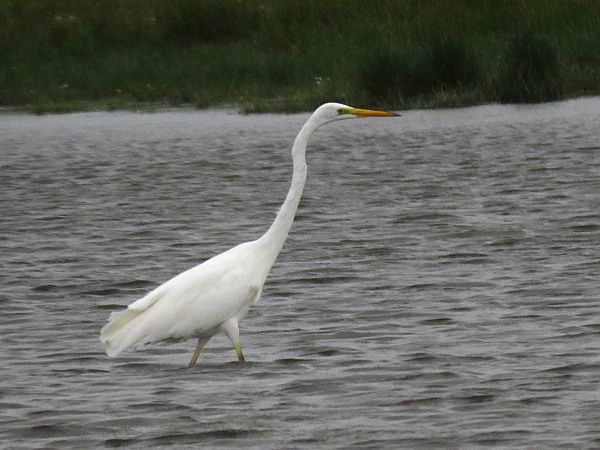 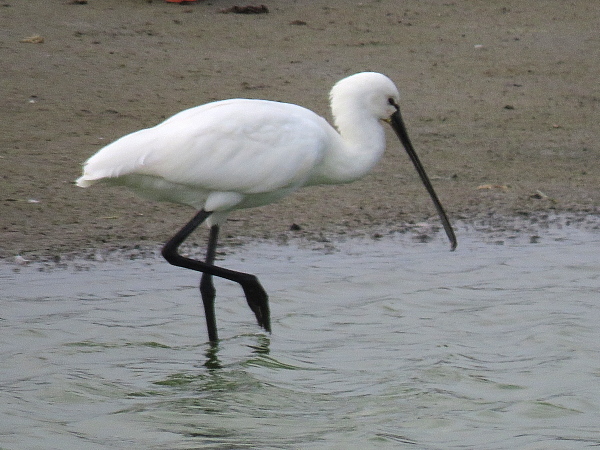 Thursday 7 September. After the usual pre-breakfast walk which produced the same male Redstart and a Short-toed Treecreeper we drove to Le Hourdel and walked a Petite Route west along the entrance to to the Somme Bay and back around gravel pits and alongside fields. Highlights on a rising tide were hundreds of Common Seals and a flock of at least 500 Sanderling, 11 Spoonbills, 12 Sandwich Terns, colour-ringed Greater and Lesser Black-backed Gulls, Black-necked Grebe, a Black Redstart and 2 Marsh Harriers. On our evening walk at Drancourt we saw a Great White Egret and had another view of a ring-tail Hen Harrier before approaching black clouds had us hurrying back. 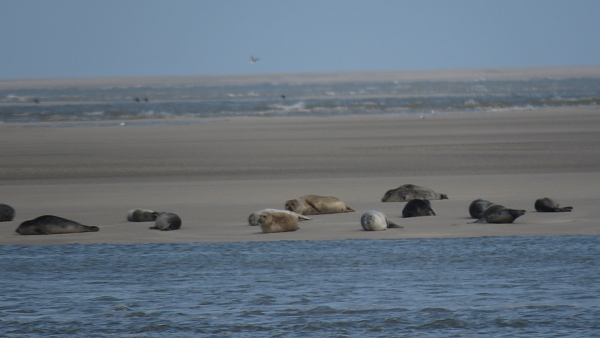 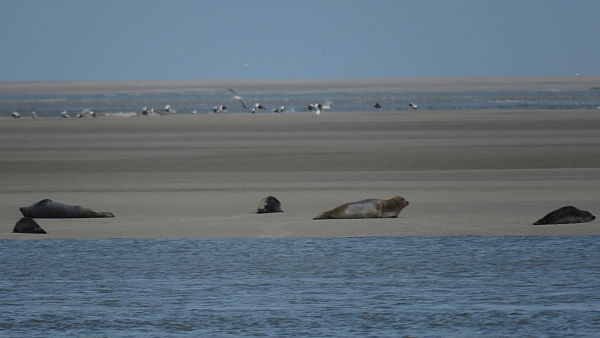 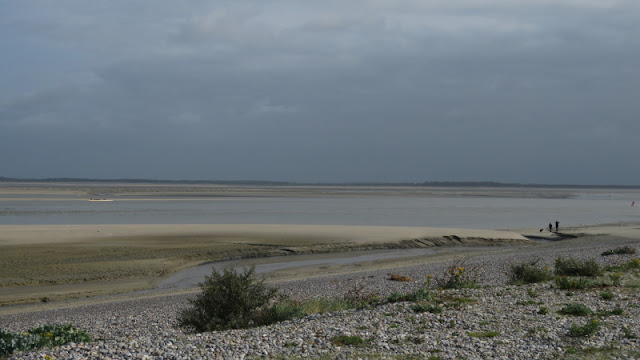 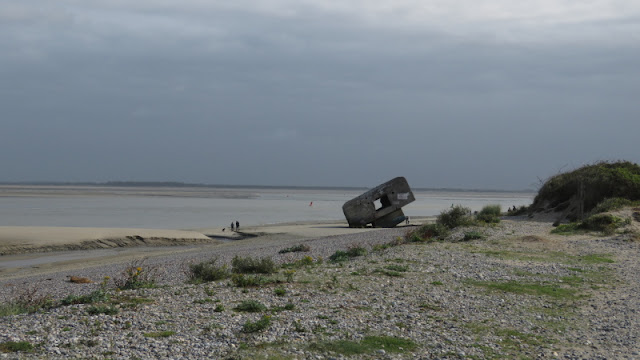 Friday 8 September. After heavy overnight rain cleared a later than usual pre-breakfast walk produced a ring-tail Hen Harrier and Crested Tit. We then drove to Le Treport and parked at the top of the cliffs south of town. It was a short walk to the funicular down into town, one of the area's main attractions for us that featured prominently in the French TV drama 'Witnesses'. Nothing was evident moving out to sea in the strong westerly winds and intermittent showers although a Black Redstart was seen near the harbour. No waiting to cross lock gates there, one side or the other is always open and usually it is both. Shoreham Port take note. Back at Drancourt the rain intensified before finally clearing. A Short-toed Treecreeper showed from the veranda while the Great White Egret was again in the adjacent fields, I flushed a Crested Lark and a Marsh Harrier flew through, the third species of harrier seen over them during our week. 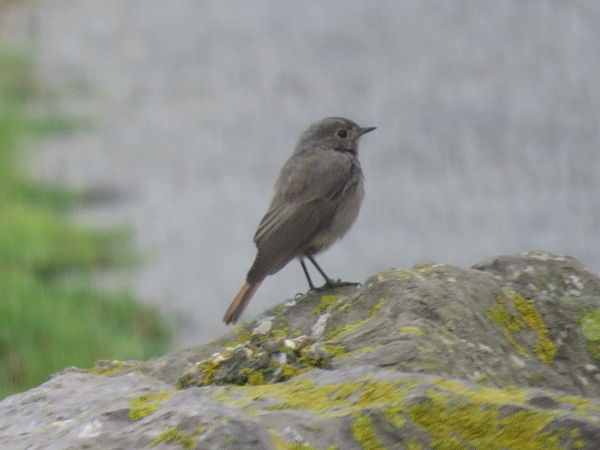 Saturday 9 September. A few more birds were evident on my final pre-breakfast walk including male Hen Harrier, 2 Redstarts, 3 Firecrests, Marsh Tit, Short-toed Treecreeper  and 2 Bullfinches. We drove to Dieppe arriving an hour before we needed to check-in. A walk up to the church overlooking the harbour produced 3 Black Redstarts while 2 Continental Coal Tits in a front garden suggested they might be on the move. Another Shag and a Yellow-legged Gull were in the harbour and single Great and Arctic Skuas, 110 Gannets and 16 Sandwich Terns were seen from the ferry, most in French waters. Once off the ferry and through Customs it was a 40 minute drive home through Brighton. A very enjoyable break which couldn't have been easier or more relaxing. 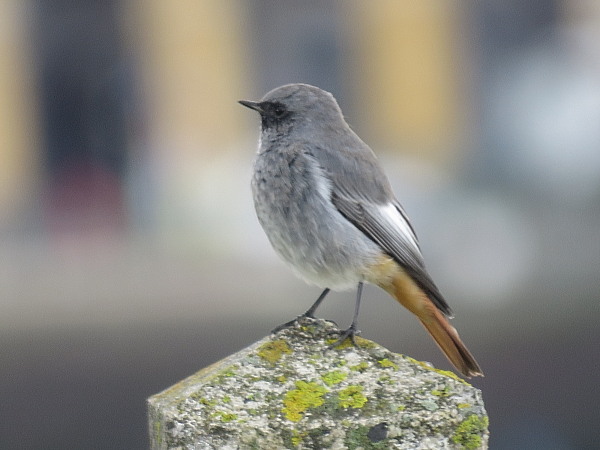