Friday 31 May. I took Cookie for a walk from West Mill to the old railway line seeing 4 Lapwings, 4 Swifts, a flock of 9 Blue Tits, 2 Reed Warblers, 2 Blackcaps, 6 Whitethroats, 2 superb Nightingales, Grey Wagtail (only my second this year), 3 Yellowhammers and 4 Reed Buntings. I'd hoped to see Turtle Dove again but had to settle for hearing one closely several times from areas it was not possible to look into. My fifth visit this month and I've seen Turtle Dove twice, heard them on two other visits and drawn a complete blank once. In the afternoon Megan and I visited the Eastern Arm of Shoreham Harbour, rather distressingly finding a recently guillotined Great Black-backed Gull on the beach below wind turbine Spinny. Rather sinisterly it had been removed by the time we walked back. We need green energy but there is a price to pay and coming face-to-face with it makes me wonder how many birds are killed by Rampion's 116 turbines. Being off-shore we'll never know. The Great Black-backed Gulls demise had the potential to become more personal when I returned home to find just the sitting bird on Glebelands and still no sign of its mate as I write this nearly three hours later ... Off now for my Woodcock survey. 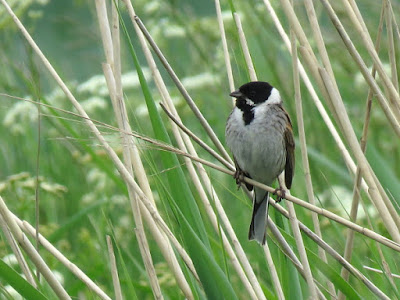 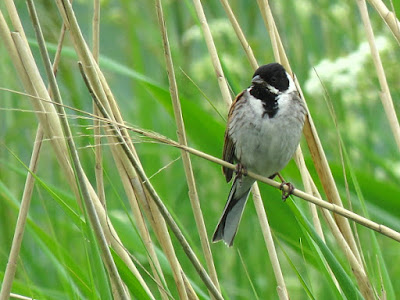 Thursday 30 May. I took Cookie for a walk from Cuckoo's Corner to Dacre Gardens. Despite the name of our starting point seeing a Cuckoo flying across the Adur near there was a surprise. More expected were 9 Little Egrets, 4 Swallows, 9 Reed Warblers and 3 Reed Buntings although just one (silent) Sedge Warbler was a disappointment. Later Megan and I took Cookie up onto the Downs and saw some orchids. The pair of Great Black-backed Gulls were on the roof at Glebelands and a Sparrowhawk and 2 Swifts flew over the garden, the latter heading east. 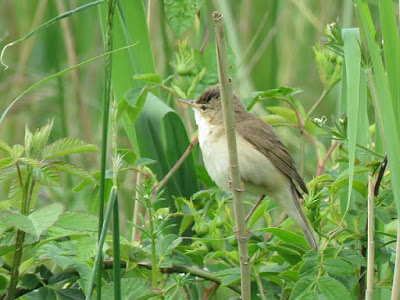 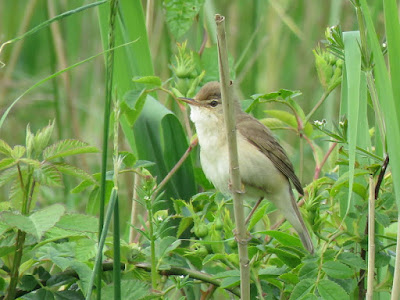 Wednesday 29 May. I completed my South Down Farmland Bird Monitoring Survey on the edge of the Burgh. During just over two hours of the survey I recorded 30 species, the highlights being 9 Grey Partridges, 2 Red Kites, 3 Buzzards, Cuckoo, Jay, 10 Sky Larks, 3 Lesser and 12 Common Whitethroats, 12 Linnets and 7 Goldfinches. On a slow walk back to my car via the Burgh I added single Red-legged and Grey Partridges, female Marsh Harrier, another 3 Red Kites, 3 Lapwings, 15 Swifts and a Swallow (the only hirundine seen). For the first time in 10 surveys no buntings were recorded and no Carrion Crows for only the second time. I called in at Amberley on the way home and walked out on the the Wildbrooks hoping to see a Sedge Warbler in the ditches but they didn't look that suitable. A Cuckoo flew over and a patch of woodland held pairs of Willow Warbler and Lesser Whitethroat. The pair of Great Black-backed Gulls were 'sitting' on the roof at Glebelands. 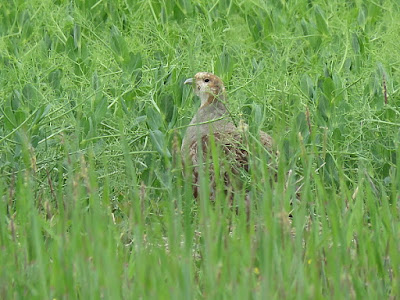 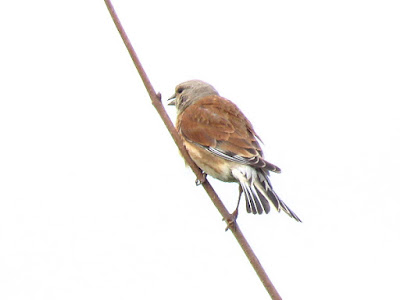 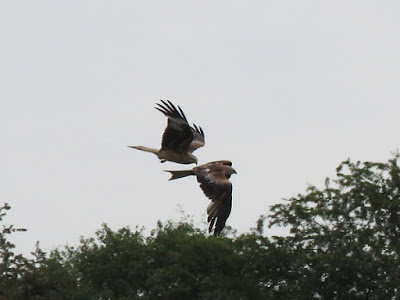 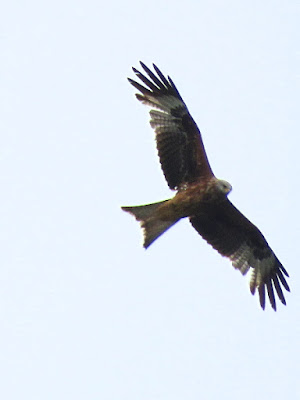 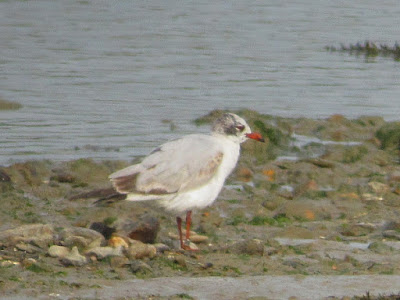 Posted by richard fairbank at 19:05 No comments:

New Forest and Pulborough Stilts (18-21 May)

Tuesday 21 May. I took Cookie for a walk on Steepdown where we saw Red Kite, Buzzard, 8 Sky Larks, 2 Lesser and 6 Common Whitethroats, 3 Stonechats and 8 Corn Buntings. In the afternoon I went to Pulborough for the Black-winged Stilts which I saw along with a very unseasonal (presumed escape) Pink-footed Goose, 14 Egyptian Geese (and 6 goslings), Wigeon, 3 Ringed Plover, Cuckoo, Hobby, 2 Reed Warblers and 2 Reed Buntings. Back home in the evening 3 Swifts were over our road, the first for three days. 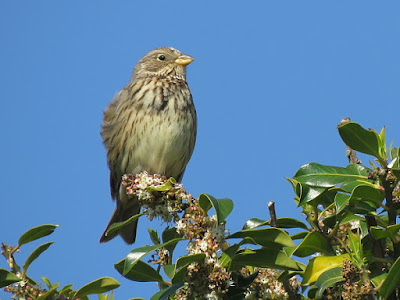 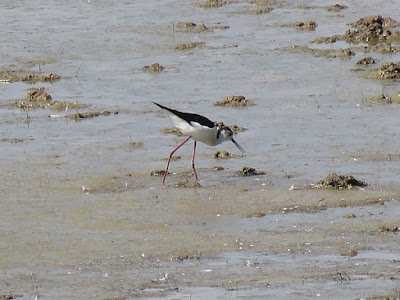 Monday 20 May. I took Cookie for a walk on the levels opposite Small Dole. We walked a 5 mile circuit and saw 3 Buzzards, 6 Lapwing, 3 Greenshank (on a semi-permanent flood), 2 Turtle Doves, 2 Reed Warblers, 2 Lesser Whitethroats, 2 Nightingales, 3 Yellowhammers and a Reed Bunting. I also heard a Cetti's Warbler, Mediterranean Gull and a distant Cuckoo. 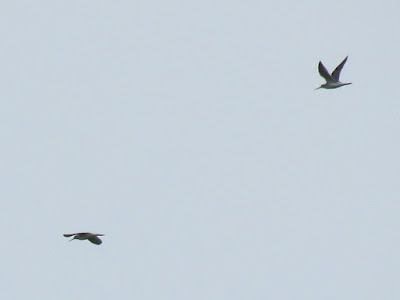 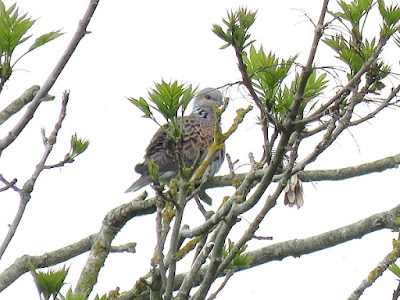 Sunday 19 May. A very enjoyable day in the New Forest with DB and JK. We visited Lucy Hill and Acres Down seeing a brief male Honey Buzzard, Red Kite, 11+ Buzzards, 2 fairly distant Goshawks, Hobby, Stock Dove, Cuckoo, 4 Jays, Raven, 3 Coal Tits, Marsh Tit, 2 Wood Lark, Willow Warbler, 2 superb Wood Warblers, Firecrest, 2 Treecreepers, Spotted Flycatcher, male Redstart (others heard), 2 Stonechats, Hawfinch, Bullfinch and 3 Siskins. I only heard Tree Pipit and Crossbill. It was my first such visit for over 20 years, I doubt I'll make it back if I leave it as long again.
Saturday 18 May. I seawatched from Shoreham Beach from 06:35-08:05, not finding out until I returned home, at about the time it would be passing, that Selsey had two Poms at 07:30. Not their usual exemplary news release. No Poms for me, obviously, in fact not much at all hence not staying longer. I saw 15 Gannets, 3 Whimbrel, 12 Sanderling, 11 Black-headed Gulls and a Sandwich Tern flying east. Megan and I took Cookie to Arundel where we walked around Swanbourne Lake. We then left her in the car for a quick looks in at the WWT. It was nice to see Scaly-sided Mergansers amongst the collection again and Harlequins and Emperor Geese are always favourites. Not in the collection (presumably) were 3 fully-winged Mandarin, Cetti's (heard) and Reed Warblers and a Treecreeper climbing up the concrete perimeter fence posts. Back home in the evening 7 Swifts were over our road and a Great Black-backed Gull sat on an old nest on a roof behind us.

Posted by richard fairbank at 22:39 No comments:

Friday 17 May. I seawatched from Splash Point, Seaford from 05:00-09:00 hoping more Pomarine Skuas would be on the move. I was partially successful seeing 4 (two pale and a dark morph at 06:20 and a pale morph at 06:25), but missed a 5th that was seen a bit later by JFC at Beachy. I'd hoped for more (one always does) but they were all close with good tails. I also saw 2 Shelduck, 38 Common Scoter, a Great Crested Grebe, 79 Gannets, 3 Whimbrel, 7 Turnstones, 13 Sanderling, 15 Dunlin, a first-summer Mediterranean Gull, 12 Sandwich and 69 Common/Arctic Terns, 2 unidentified skuas (very distant Poms or Bonxies, possibly including JFC's 5th bird), a Razorbill and 7 unidentified auks.I thought one distant flock of Commics included at least 2 Black Terns but they remained stubbornly above the horizon where all looked fairly dark but Dungeness had 60 by 10:00 including a very impressive flock of 45. With no news of birds moving further down the channel I gave up and tried Seaford Head where a Black Redstart was my only notable sighting. 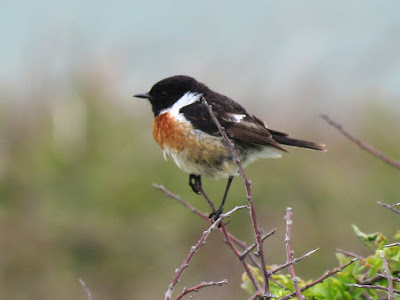 Thursday 16 May. A somewhat chaotic day. It started with a dull seawatch at Shoreham Fort. I strolled up at 06:35 to find the harbour arm was locked so sat on the beach and in the next two hours recorded the following: 2 Shoveler, 42 Common Scoter, 2 Fulmars, 23 Gannets, 5 Whimbrel (and another heard), 2 Bar-tailed Godwits, a Turnstone, 4 Kittiwakes, 3 Sandwich and 7 Common/Arctic Terns, 3 auks, 4 Swifts, 2 Swallows and 3 Bottle-nosed Dolphins. I returned home and Megan and I took Cookie to Rackham seeing 4 Buzzards, a Coal and 9 Long-tailed Tits, Nuthatch and Treecreeper. Back home we had lunch and I checked my phone at 14:00 to learn 10 Pomarine Skuas had flown past Selsey Bill at 13:35. I immediately returned to Shoreham Beach, settling for the nearest part at the end of Mardyke Road. I arrived at 14:15 and the flock of 10 Pomarine Skuas came by at 14:32, a bit distant and in light glare but still very nice. I waited to 15:15 but only saw 7 Gannets, a Fulmar and 3 Sandwich Terns. With no news of any more down channel I returned home via the Adur but 2 Little Egrets, 2 Oystercatchers and a Swallow (sadly a typical visit) didn't detain me for long. Back home again further news from Selsey of 3 Pomarines mid-afternoon (turns out they were at 15:35) and 5 late-afternoon (15:55) had me returning to the beach at Mardyke where I arrived at 16:45. The light was much better with the sun further round and the glare much reduced.I was sure I'd missed the 3 but at 16:54 2 distant Pomarine Skuas came through with 6 close stunners at 17:00. Presumably 3 + 5 had become 2 + 6 but with Poms you never know. Things then went a bit pear shaped with Selsey seeing 8 at 17:24 which were not picked further along the coast. Selsey had another 5 at 18:30 which were seen at Worthing and past me rather distantly at 19:33. Selsey had 3 at 18:48 which came close past me at 19:59. Selsey also had 3 singles which I failed to pick up. I watched from 16:45-20:40 and as well as 16 Pomarine Skuas saw 49 Gannets, 4 Grey Plover, Whimbrel, 13 superb summer Knot, 2 Sanderling, 18 Sandwich Terns and 3 Swifts. A very enjoyable day.
Wednesday 15 May. I took Cookie back to the South Section of the Knepp Estate seeing similar birds to the previous visit, namely 2 introduced White Storks (one on the nest), 3 Stock and 2 Turtle Doves, 3 Cuckoos, Jay, Coal Tit, Garden Warbler and Mistle Thrush. I also heard the other common warblers and 3 Nightingales. In the evening I visited Lavington Common for the first Woodcock survey. Conditions appeared ideal but the heathand looked noticeably drier than previous visits with more rhododendron clearance along the eastern edge. I only encountered one Woodcock, seen very much by chance flying well outside my 'recording area'. None were heard and I drew a complete blank with Nightjars. Hopefully the latter hadn't arrived although I saw and heard three on the same date last year. No Tawny Owls were heard either, although Cuckoo and Dartford Warbler provided some compensation.
Tuesday 14 May. I took Cookie up onto the Downs walking a circuit from Lancing College to Cowbottom, Coombe Head and Steepdown. We saw 4 Buzzards, 3 Grey Partridges, 2 Swifts, 8 Sky Larks, 7 Swallows, 16 House Martins (confirmation from yesterday), 6 Whitethroats, 2 Mistle Thrushes, a Stonechat and 3 Corn Buntings.
Monday 13 May. Seawatching at Widewater from 05:50-07:50 was hard work with little moving. I recorded 3 Little Egrets, 3 Gannets, 3 Ringed Plover, a Whimbrel, 8 Dunlin, 29 Black-headed Gulls and 15 Sandwich Terns flying east and 2 Swallows coming in. Later  nothing of note was seen on the Adur although I suspected that 20 hirundines flying around over Lancing College were House Martins.
Posted by richard fairbank at 19:38 No comments: