Sunday 23 February (continued). We were staying at La Oliva but check-in wasn’t until 16:00. On the way were the Tindaya Plains and the most reliable site for Houbara Bustard. Although late morning wasn’t the best time and the sand storm wasn’t improving it seemed worth a look, if only to sort out where I should be at dawn the following morning. The road through the village was easy to find but soon deteriorated to a pot-holed track. After 2-3km we stopped at a crossroads and I started scanning. After 10-15 minutes I saw what looked like a distant bustard’s head and neck neck behind a patch of low vegetation. It wasn’t moving and might have been a strange shaped tree stump. I was confident it was the former but couldn’t find it in my telescope, not helped by it being on Megan’s side of the car. I couldn’t find it again through binoculars either. It had moved making it a Houbara Bustard but I needed a much better view. We drove slowly 150m further on and stopped and there it was sheltering from the strong wind behind a spiky bush and less than half the distance it had been originally. I took loads of photos as it stood there and then sat down. Brilliant. I turned the car around to head back and Megan spotted a second bustard on her side of the car. She then spotted a smaller bird running around, one of two Cream-coloured Coursers. Superb, she’ll have to be my spotter more often. We also saw a Great Grey Shrike and three Trumpeter Finches but that was it. Very happy we left and drove through La Oliva and on to El Cotillo on the NW corner of the island. Here the wind was approaching gale force and there was a lot of sand in the air. Opening the car doors required care and a trip to El Toston Castle on the opposite headland had to be abandoned when Megan was nearly blown off her feet rounding the corner of the building nearest to it. We saw three Turnstones in the harbour and visited a supermarket before driving north through dunes to the lighthouse and museum at Faro del Toston. It was only 4km but seemed much further with visibility down to under 300m at times due to sand blowing across the road. Everything was closed and brief look at the very rough sea revealed nothing passing although three House Martins on the edge of town were probably wishing they were somewhere else. We left and had sandwich in the car half way back to El Cotillo. Returning to La Oliva we walked around the town then found our accommodation on the edge of town, a nice spacious apartment at Casa Rural SoleaRio. With no let up in the weather we didn’t venture out again. 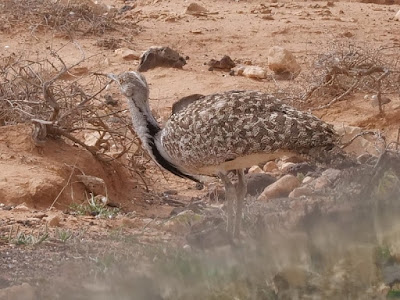 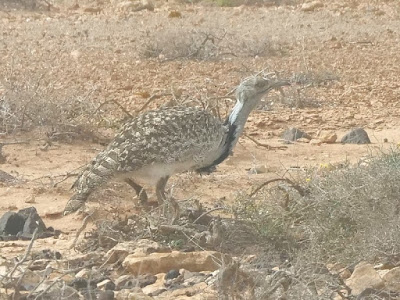 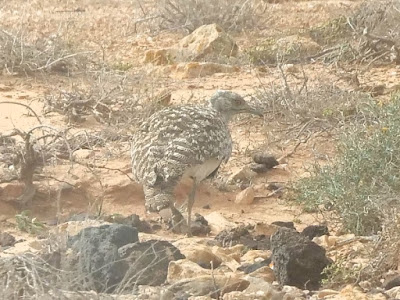 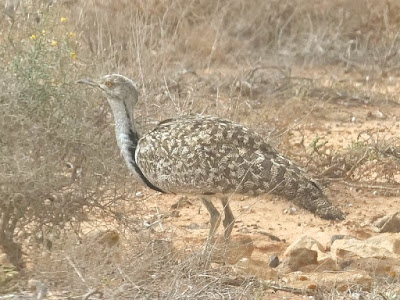 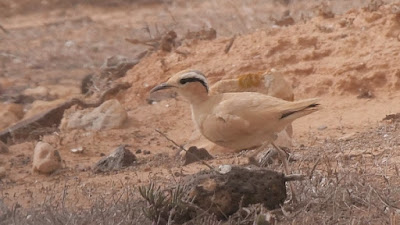 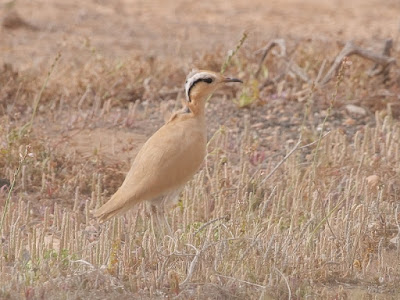 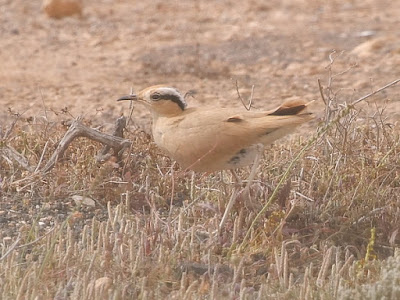 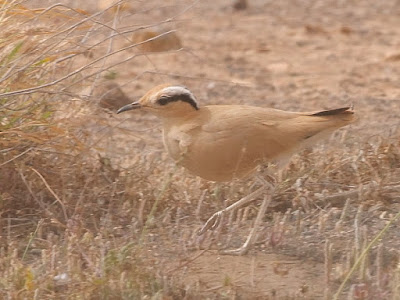 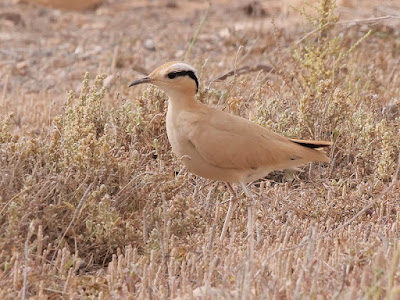 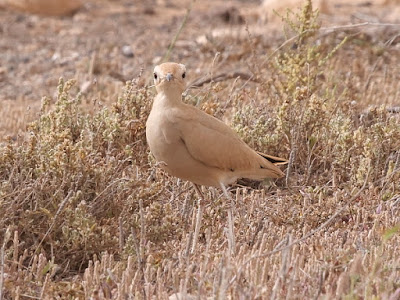 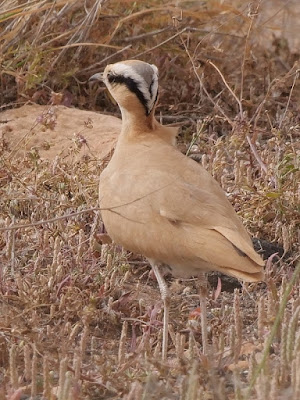 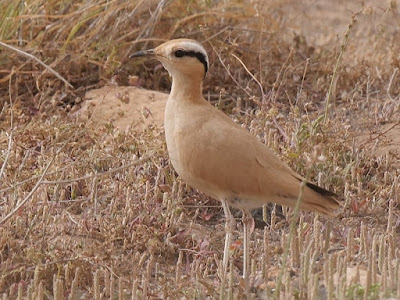 Monday 24 February. Visibility had improved and it didn’t seem as dusty although it was by no means clear. It took half an hour to drive to the cross-roads on Tindaya Plain where I arrived at dawn. Birding was difficult due to the very strong wind and poor visibility but I did see a displaying Houbara Bustard although it was quite distant and the only time I felt justified in taking a telescope. It puffed up its neck feathers and ran for 50m at the speed of a cyclist looking very much like a large white balloon (from the Prisoner) before stopping, a process repeated several times. No coursers this morning with 2 Yellow-legged Gulls, 14 Ravens, a Great Grey Shrike and female Fuerteventura Stonechat the only birds seen on the plain in an hour. before returning to La Oliva for breakfast. It remained dull with the sun failing to break through so we visited the Art Museum (photographable Berthelot’s Pipit and Spanish Sparrrows my highlight) before driving up to the resort town on Corralejo. It was expectedly very touristy with 23 Turnstones, Little Egret and a Red-rumped and several Barn Swallows seen. We took the road back through the Dunes National Park stopping for lunch by the road. Back in La Oliva we walked around town finding most of the other ‘attractions’ closed although a fly over Black-bellied Sandgrouse and several Hoopoes were more than adequate compensation for me, Megan making do with a visit to an Aloe Vera shop. At 16:30 I went out to the SE of town walking a few kms to a couple of distant hills hoping for better photos of Fuerteventura Stonechats. I drew a blank in 2.5 hours but Barbary Partridge, 2 Common Quail, more Hoopoes (taking my day total to 8), three Great Grey Shrikes, two of 11 and 50 Lesser Short-toed Larks, 6 Berthelot’s Pipits, 8 Trumpeter Finches, 55 Linnets and 2 Corn Buntings made up for it. We’d now not seen the sun for three whole days although some stars were a welcome sight when we looked out after dark. 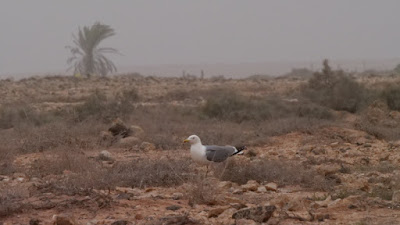 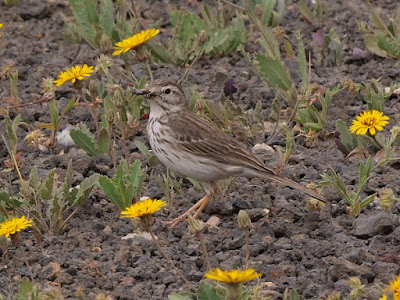 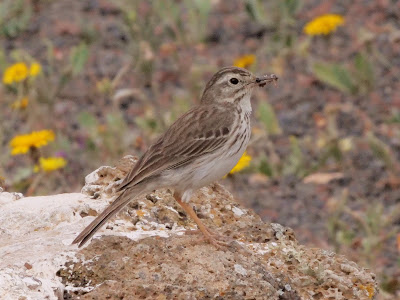 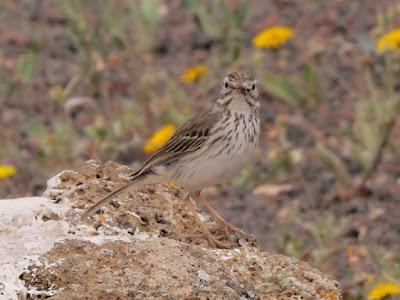 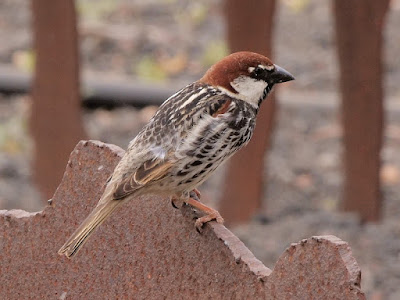 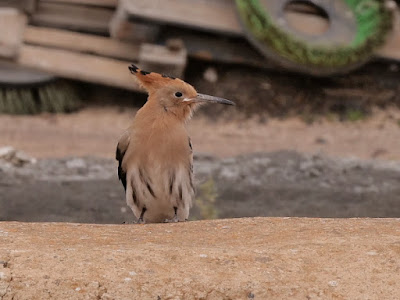 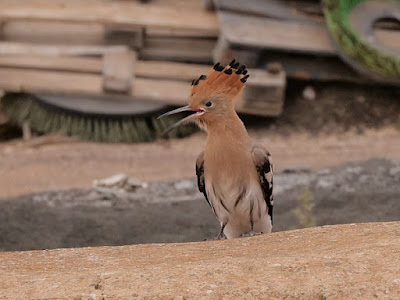 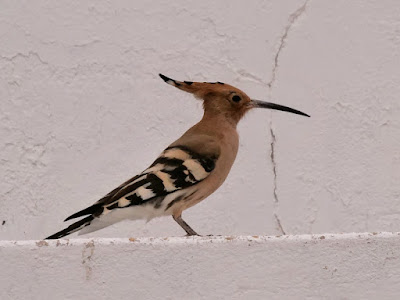 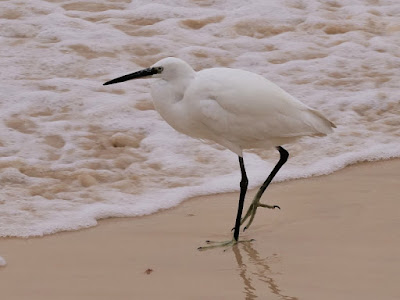 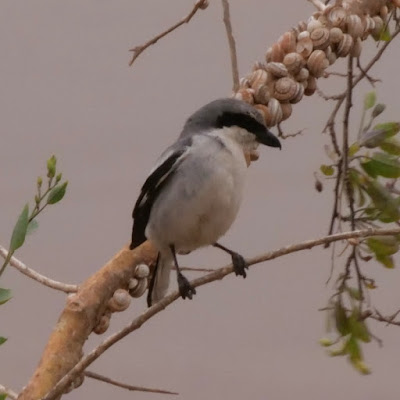 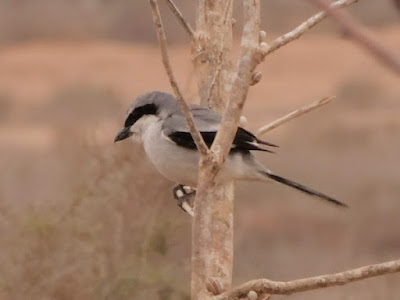 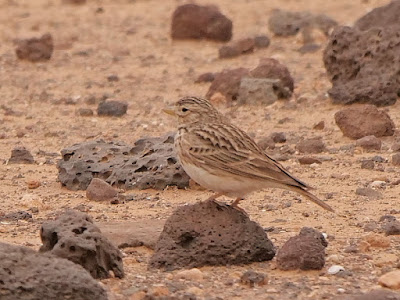 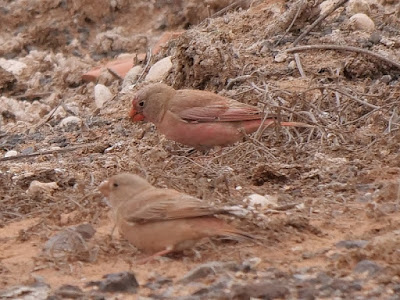 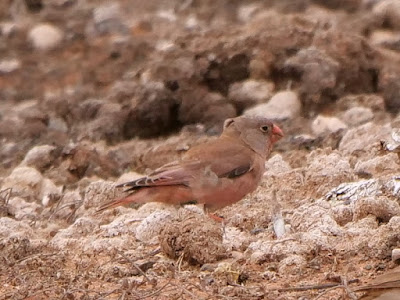 Tuesday 25 February. Our final morning and the sun was shining. We left at 09:00 and drove to Puerto del Rosario, arriving by the coast just north of the airport just under an hour later. We walked up the Barranco del Rio Cabras for an hour, it was already rather warm. There was little activity in the barranco but we did see 2 Red-rumped Swallows, Sardinian, 2 Spectacled and poor views of a Subalpine Warbler, 6 Berthelot’s Pipits and 2 Trumpeter Finches. An adult Egyptian Vulture flew over and at one stage a flock of 500 very distant Yellow-legged Gulls appeared inland, perhaps disturbed from a rubbish tip? It was my last chance to improve on Fuerteventura Stonechat photos and I did see a female, half way back to the car as I was starting to give up on them. We filled the car with petrol, we’d used £20 worth in our five days, checked-in, our EasyJet fight was on time. We had views of Shoreham-by-Sea on our way to Gatwick, landed without any stacking and were home by 20:00. An enjoyable break. Knowing the Dwarf Bittern had probably gone I had seen all the birds I’d hoped to and although none were new I’d not seen many for 40 years or more. 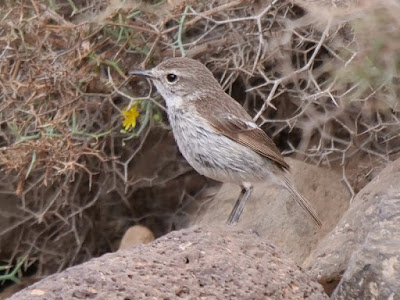 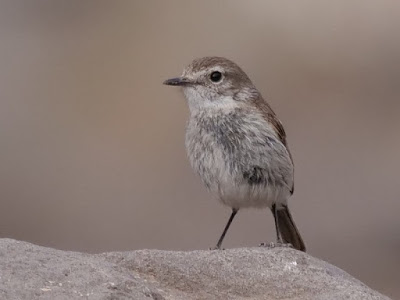 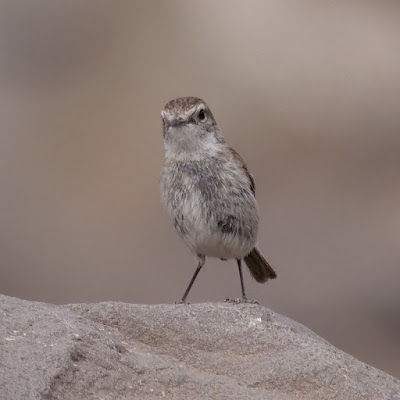 Posted by richard fairbank at 17:36 No comments: