Wednesday 25 October. An early visit to Mill Hill with Cookie produced 2 Goldcrests, 7 Long-tailed Tits and about a dozen Blackbirds in very dull conditions. Later when the weather had greatly improved Megan and I walked Cookie from Widewater to Beach Green Lancing seeing a Wheatear and single Meadow Pipit on the beach. 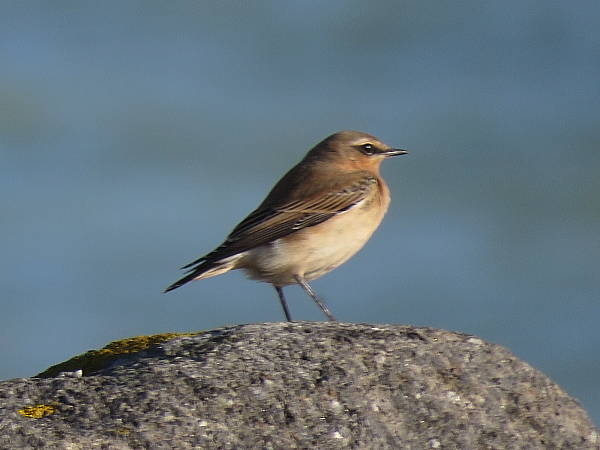 Sunday 22 October. Megan, Ruth and I took Cookie to Crowlink and walked along half of the Seven Sisters to Birling and Belle Tout and back. A nice clear sunny day made for a lovely walk despite a strong westerly wind. I saw one each of Chiffchaff, Buzzard, Stock Dove and Corn Bunting and about 30 Goldfinches making it possibly my quietest ever visit to Beachy.

Saturday 21 October. Very rough weather with some very heavy showers, one which caught Cookie and me on the Adur while checking the gulls at low tide. One of the 62 roosting Great Black-backed Gulls was colour-ringed making it worthwhile.

Friday 20 October. A short seawatch during a visit to Shoreham Fort in a very strong westerly wind produced 4 Gannets and an adult Mediterranean Gull flying west while a Rock Pipit and 2 Greenfinches were on the beach. Hopes of finding a Grey Phalarope were soon dashed and Widewater was no more successful. Later Megan and I took Cookie to Pulborough walking the fungi trail and to Hayle's Viewpoint. A Coal Tit was the highlight.
Posted by richard fairbank at 19:52 No comments:

Wednesday 18 October. A successful trip to Dorset where the Two-barred Greenish Warbler was showing in dull weather at St. Alban's Head. John King and I were on site for two and a half hours and had a number of good but usually brief views. Most of the time I concentrated on watching the bird but a couple of times tried photography, twice finding it in the view-finder. It was a bird I'd wanted to see in Britain for many years. Nice to see John and Doreen Cooper, Richard and Ann Kelly and from my formative days in Cardiff Hadyn Jones. I also saw Black Redstart, 2 Chiffchaffs, a Goldcrest and 2 Firecrests. 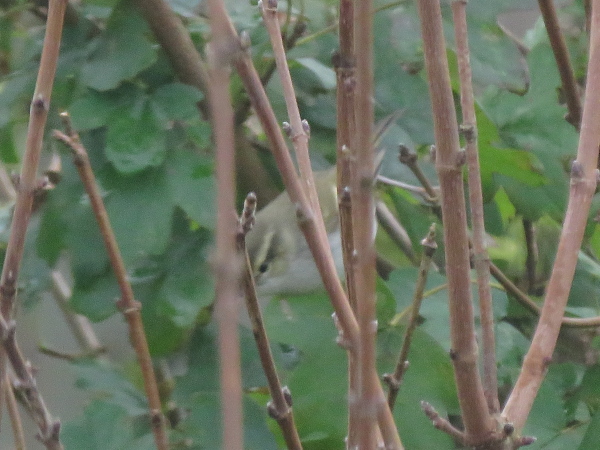 Tuesday 17 October. A Peregrine on a lighting gantry near Southwick Power Station as I cycled to work.

Sunday 15 October. After a very quiet visit to Mill Hill with Cookie (3 Long-tailed Tits, 2 Goldcrests and a Chiffchaff) Megan and I took her to Rewell Woods to look for Hawfinches. We saw 21 although they were very skittish. Also a Red Kite and some brilliant fungi. Later, at low tide, there were two Le Havre colour-ringed Great Black-backed Gulls on the Adur.
Saturday 14 October. Johh King and I spent over 5 hours at Beachy seeing very little. I recorded 70 Swallows, 22 House Martins, 13 Stonechats, a male Ring Ouzel, 6 Chiffchaffs, 2 Goldcrests, a Raven, 350 Goldfinches, a Bullfinch and a Reed and 26 Corn Buntings. With light winds, albeit westerlies, we'd hoped for more.
Friday 13 October. Megan and I took Cookie to Cissbury. Very quiet with single Green Woodpecker, Mistle Thrush and Jay seen and a Chiffchaff heard. Later I had a wander around Brooklands hearing a Chiffchaff and seeing 3 Long-tailed Tits. Not sure why I bothered but one always hopes ...
Posted by richard fairbank at 22:20 No comments:

Megan and I went to Northern Greece for a week in early October, Megan interested in the antiquities and me hoping to see Dalmatian Pelican. Neither of us had been to Greece before and we were not disappointed.
Tuesday 03 October 2017. We flew with easyJet from Gatwick to Thessaloniki, an early departure that had us a Summer Parking at 03:45 car. Our flight arrived a little early and we collected an upgrade to our pre-booked car from SiXt, a very nice Mini Cooper diesel automatic even if it did have very low seats. Less impressive was learning our prepaid fully comprehensive insurance didn't cover the car's mirrors, wheels or underneath. We decided against paying extra for those but immediately wondered if it would be a false economy. We drove north to Lake Kirkini near the Bulgarian border navigating using downloaded maps.me on my phone. We stopped at the south of the lake and scanned, and not far offshore were two Dalmatian Pelicans. It is always nice to see one's target bird early on in a trip. We made a few more stops along the lake before arriving at our accommodation, the very friendly Morfi Hotel in Kirkini. We wandered around the nearer part of the for the rest of the day. There were lots of birds on the lake but most were too distant to identify. We saw more pelicans (most distant Dalmatians), 3 Pygmy Cormorants, a Black Stork, hundreds of distant Greater Flamingos, 2 Caspian Terns, Kingfisher, a few common migrant hirundines and warblers (just like Sussex), 4 Spotted Flycatchers and a few Jays and Hooded Crows. 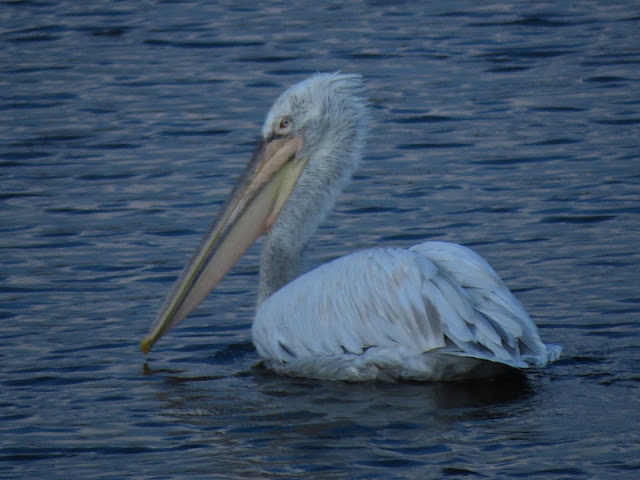 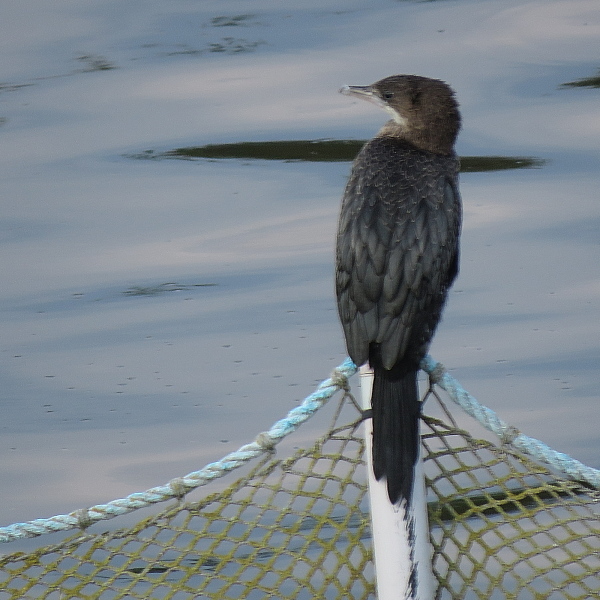 Wednesday 04 October 2017. After an earlyish breakfast which included enough food to make a packed lunch we drove to the NW corner of the lake but the light was very poor. We tried a road down to the lake along its northern edge from where birds were closer, but still distant, and the light much better and spent the best part of an hour there. We then found a track to the eastern side of the lake, the light was great but birds again very distant. It would have been possible to drive around this part of the lake on a rough track and we might have tried it had we gone for the wheel and underneath cover although I'm not sure it would have taken us much closer to the distant pelicans and flamingos. We continued on to Serres, rather too busy for our liking but some nice views looking down on the city. Back to Kirkini we tried the NW corner again, the light was very much better but most of the birds no closer. We also tried the western side again but a group on horses and few birds were in the best looking area. Birds seen included 6 Garganey, 100 Shoveler, 1000+ Greater Flamingos, Squacco Heron, hundreds of Pelicans (most too distant to identify), Pygmy Cormorant, 8 Avocets, 200+ Common Snipe, 100 Wood Sandpipers, 10 Greenshank, 25 Yellow-legged Gulls, 8 Jays, 30 Hooded Crows, 50 Swallows and a House Martin, 30 Willow Warblers and 5 Chiffchaffs, 10 Spotted Flycatchers, 120 Yellow and 3 White Wagtails, a Red-throated Pipit seen and one heard and 3 Hawfinches. 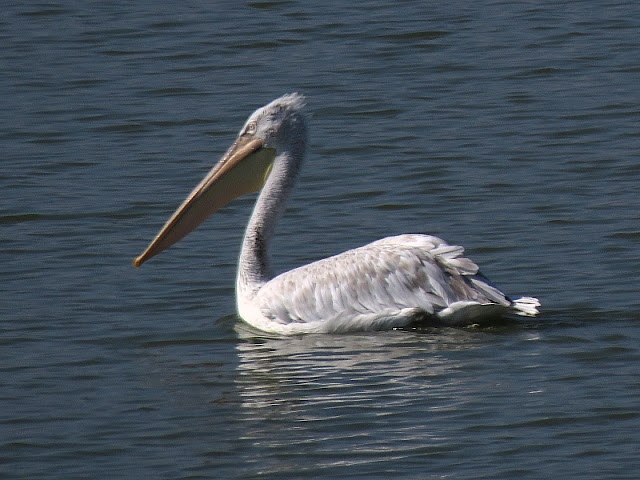 Thursday 05 October 2017. After breakfast we tried the track to northern side of the lake again but birds were no closer and despite being earlier the light not much better. We continued to the eastern side of the lake to a rough track which headed in the direction of the lake shore but after walking for half an hour open water was no more apparent. We returned to the Morfi and checked out. It had been an excellent place to stay. We drove west to Edessa stopping at Lake Dojran on the border with Macedonia for a picnic lunch we'd prepared at breakfast. The route was then a bit cross country to Edessa, not helped by my missing a couple of turnings. We arrived in Edessa mid afternoon, found our hotel, the Hagiati, and parked easily in the street opposite. The hotel was ideally located close to the waterfalls and the old town. We looked around them until dark. Birds seen around Lake Kirkini included 500+ Greater Flamingos, 2 Spoonbills, 20+ Dalmatian Pelicans, Marsh Harrier, 20 Avocets, 2 Green and 20 Wood Sandpipers, a Sand Martin and 100 Swallows, 6 Willow Warblers and 40 Chiffchaffs, 8 Spotted Flycatchers. At Dojran we saw 6 Dalmatian Pelicans, 20 Pygmy Cormorants and a Red-backed Shrike with another 5 Red-backed Shrikes and 6 Crested Larks on the journey to Edessa. Perhaps best of all was a superb Wood Warbler in Edessa. 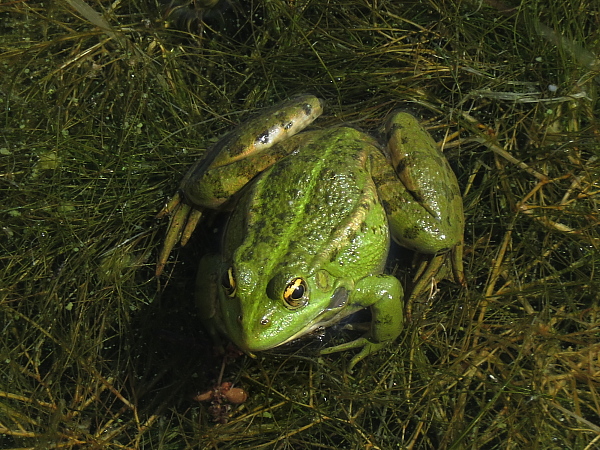 Friday 06 October 2017. We walked down past the waterfalls to the foot of the escarpment and the ancient city. Back in town, not as steep a climb as we'd feared, we visited a few sites before finishing the day driving a short distance to the Agas Reservoir. We failed to access it from the north, the road our map showed running alongside provided no more than views of the tops of some reeds with the only track we found off it soon heading in the wrong direction. The south side was more successful. Areas of open water were few but did host about 10 Ferruginous Ducks. Other birds seen during the day were 320 Little and a Red-necked Grebe, Bittern, Purple Heron, 3 Pygmy Cormorants, a Red-rumped Swallow, another superb Wood Warbler (in Edessa), Spotted Flycatcher, 2 Grey Wagtails and a Red-throated Pipit and poor views of 4 Cirl Buntings. 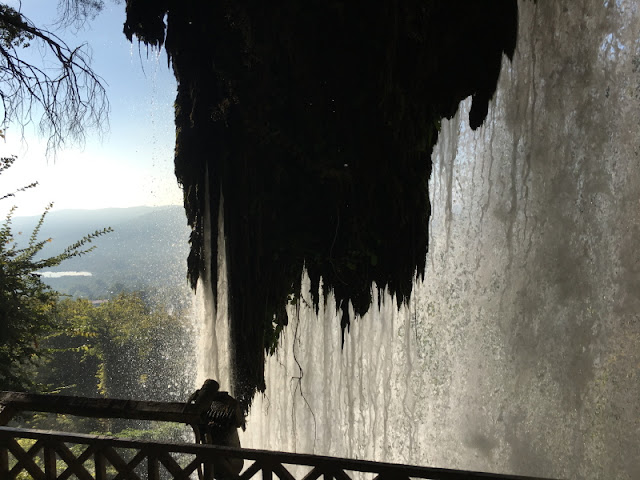 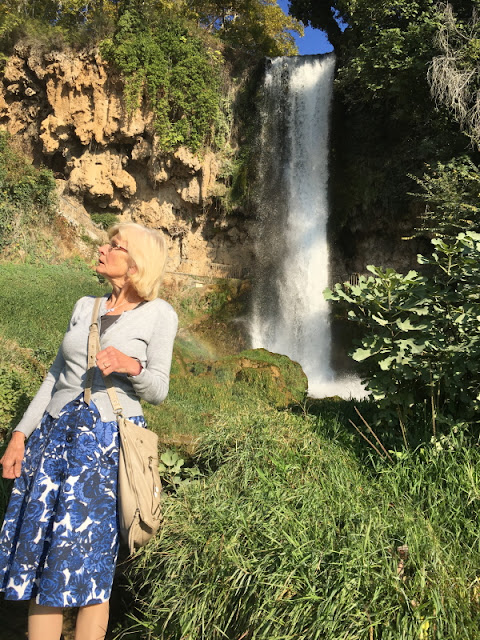 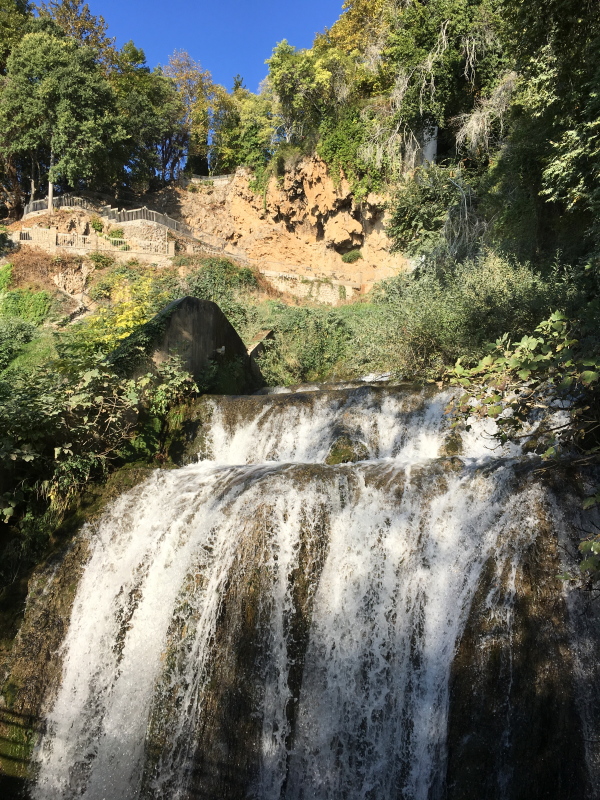 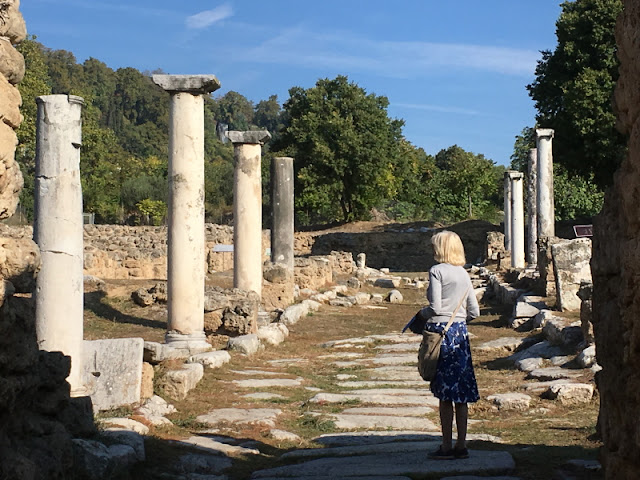 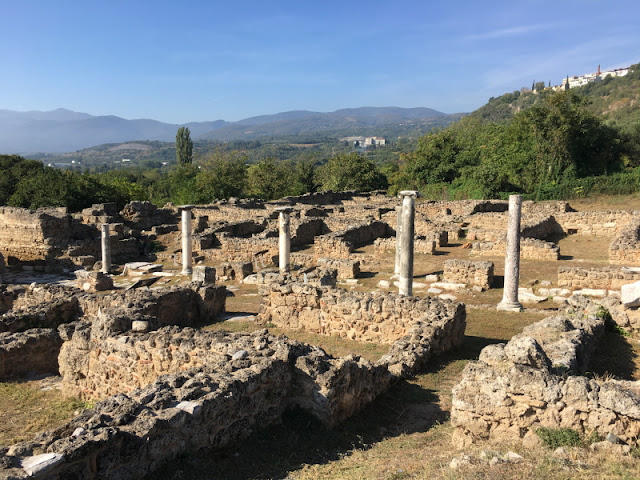 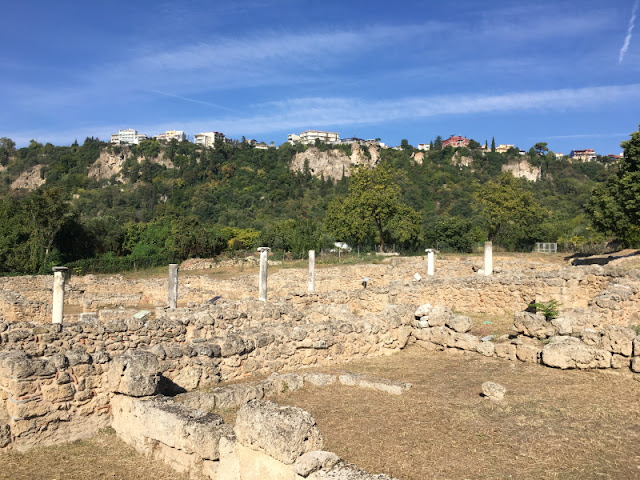 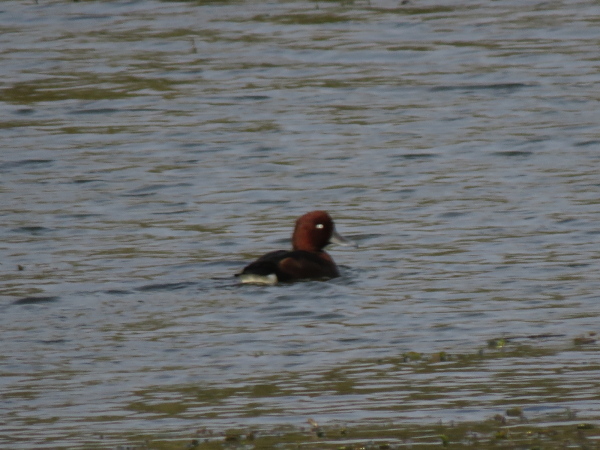 Saturday 07 October 2017. After several warm sunny days the weather changed and it was heavily overcast when we left Edessa. We drove to the ancient site of Pella where it was blowing a gale. We had just about finished looking around the ruins when the rain set in. We visited the museum and drove to Vergina in improving but still quite rough weather. The Museum of the Royal Tombs, once we found it, was very impressive despite being an underground excavation. Above ground sites were closed for renovation which was disappointing even if visiting them would have been rather bracing. We drove the short distance to the Ktima Kalaitzi, our hotel for the night set somewhat remotely in a vineyard on a hill top. An ideal location for a creepy murder mystery although it was hosting a wedding reception. Once checked in we returned to a supermarket in Vergina to buy some food and visited nearby Veroia Reservoir. Birds seen during the day included a Pygmy Cormorant, 800+ Coot, 2 Yellow-legged Gulls, a Little Owl, 4 Tree Sparrows, 5 Spotted Flycatchers and a Black Redstart. 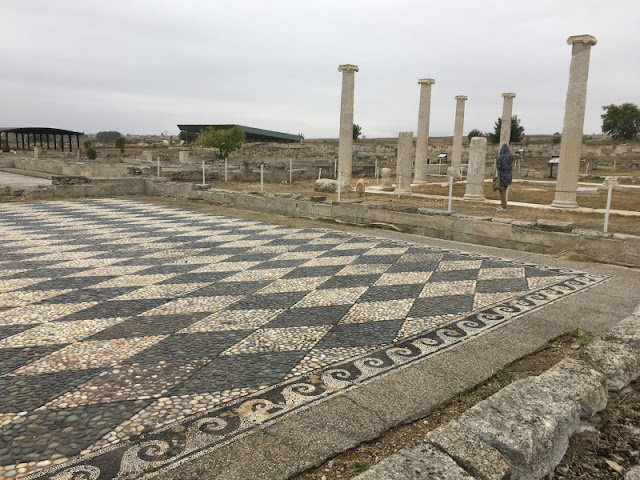 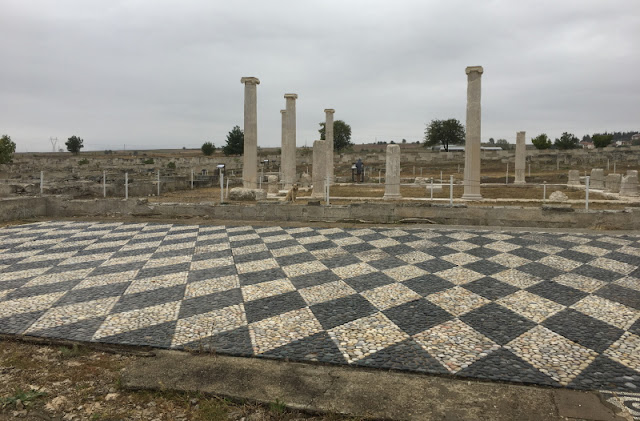 Sunday 08 October 2017. We left Vergina and drove towards the coast to the main north-south highway. Turning off just before it we took a track 2-3 kms down to the coast where we saw 100 Greater Flamingos, 10 Great White Egrets, 4 Dalmatian Pelicans, Pygmy Cormorant, Marsh Harrier, 2 Curlew, 4 Greenshank, 5 Crested Lark and some Rock Sparrows in mobile mixed sparrow flocks. We drove back to Thessaloniki although it took a while to rejoin the main road. Traffic was light out to the airport where we returned the car, somewhat muddy thanks to the coastal excursion. We caught the airport bus back into the city centre, missing our stop which added a couple of minutes to a short walk to Hotel Ilisia where we were staying for our last two nights. It was a typical cheap, basic, city centre hotel and although our room had a nice view we later discovered the road outside was quite busy all night. We walked to the seafront and along the prom to the White Tower seeing 5 Caspain Terns and 4 Yellow-legged Gulls. The Battlecruiser Averoff making its first visit to the Aegean since WW2 was moored at a nearby quay too good to miss so we headed there at sunset. 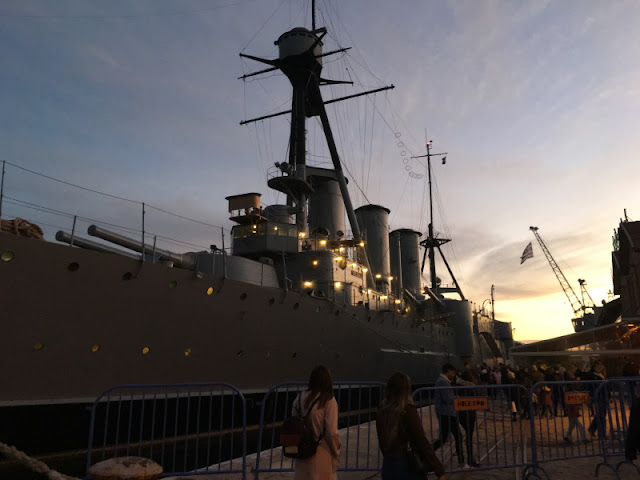 Monday 09 October 2017. A day visiting museums, we saw some nice mosaics, lots of stone pillars and statues (many headless) and enough pots, coins and religious icons to last me a lifetime. I also saw 4 Yellow-legged Gulls, 2 Caspian Terns, 25 Alpine Swifts, 500+ Rooks (roosting in the town) and a Spotted Flycatcher. At dusk we revisited the Averoff. 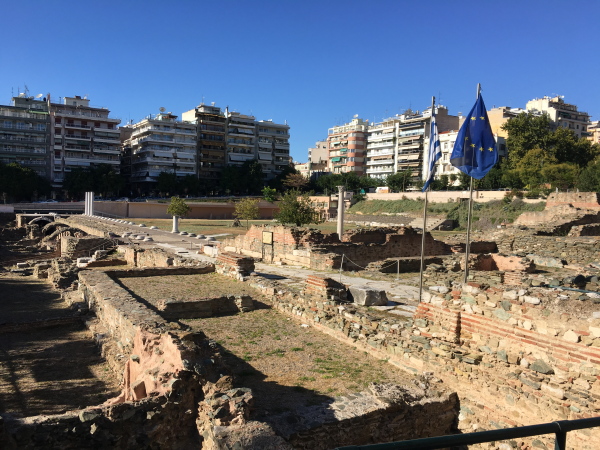 10 October 2017. We caught the airport bus, rather more crowded than previously, checked in and flew home. It had been an enjoyable, relaxing and successful holiday.

Posted by richard fairbank at 22:31 No comments: