Wednesday 29 January. The highlight of a morning visit to the River Adur with Cookie were two Mediterranean Gulls on the river bank by Ricardo's. One was colour-ringed - my 300th colour-ringed reading on the Adur between the A27 fly-over and the sea, involving 180 individuals of eight gull species. Otherwise it was quiet with 7 Redshank and 2 Little Grebes.
Tuesday 28 January. I took Cookie to the Adur where we walked a circuit crossing the river by the Norfolk and Old Toll Bridges. The highlight was seeing again Polish Black-headed Gull TUXR although there were more birds around than usual. I also saw 6 Oystercatchers, 110 Lapwing, 7 Turnstone, 7 Redshank, Little Grebe, Little Egret, Raven (on the mud), 7 Sky Larks, Stonechat, Rock Pipit, 25 Linnets and 3 Reed Buntings.
Monday 27 January. Megan and I took Cookie to Shoreham Harbour and walked along the boardwalk. We couldn't find any Greenfinches but back at the harbour three Purple Sandpipers were feeding at the inner base of the western arm giving my best views this winter by a long way. Harbour Way had produced nothing on the way but on our return a Mediterranean Gull and Polish Black-headed Gull T5PE was again present. 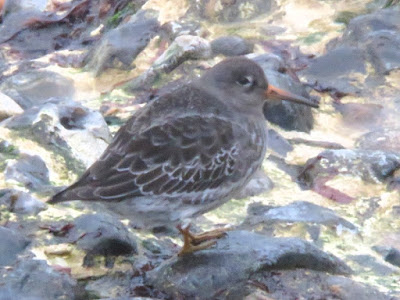 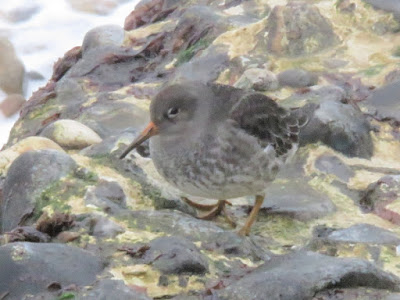 Sunday 26 January. Megan and I took Cookie to Brooklands, having only returned from Myanmar at midnight it was about all I could manage. We saw 8 Teal, male Pochard, a Little Grebe and a Great Spotted Woodpecker. I wasn't expecting much more although disappointingly the rough field bordering the A259 had been cut and so was devoid of  Stonechat and Reed Buntings.


Posted by richard fairbank at 19:05 No comments:

Tuesday 21 January. We had breakfast at 06:00 and departed at 06:30 for the 15 minute drive to the airport, not too early to see the first tourist balloon. Our flight left on time at 07:45 and arrived at Heho half an hour later. Ko Pan and driver we waiting and we were soon on our way to the lakeside Hupin Hotel. It was amazingly posh, almost uncomfortably so, and I was very glad we’d arranged an all in package with Moe and didn’t know the cost. Our rooms were ready, chalets on stilts over the lake, so we dumped our bags and grabbed essentials expecting to be driving somewhere but it turned out we were going by boat. We headed to the north of the lake and down a narrow channel, landing on a bank in beside the reedbed. We saw several Jerdon’s Bushchats although they were quite mobile and a leg section of my lightweight tripod breaking didn’t help, the third trip running I’d an issue with the tripod. We returned to the boat and headed for the open lake to check some skittish diving duck. Fortunately the tripod didn’t need extending and worked perfectly. Most were Ferruginous Ducks of which there were up to 40. From some distance Ko Pan, who had his eye in, picked out several Baer’s Pochard although we only managed to convince ourselves of the male which we saw quite well, Barry obtaining a decent photo when they flew. It was a bird I’d not expected to see although I knew a few wintered on the lake. Encouragingly Ko Pan told us he’d seen up to 8 this winter, twice as many as during the previous winter. We headed halfway down the east side of the lake to an Asian Open-billed Stork colony of several hundred birds, all looking rather grubby, behind another posh hotel. The storks had been there first but didn’t seem to have been put off by the hotel’s proximity. We continued to the bottom of the lake to yet another riverside hotel for lunch and an obligatory tour of the local sweat shops where local women were weaving and dyeing cloth. Not my scene and I didn’t pretend to express any interest. Not before time we headed back up the west side of the lake successfully checking floating tomato gardens for Collared Mynas. We were back at the hotel at 17:15 and after dumping our stuff Duncan and I walked up to a monastery overlooking the lake. Views were rather obstructed by the buildings but 10 Ashy Wood Swallows roosting on the monastery’s spire just about made it worthwhile. Back in our room I managed a temporary fix on my tripod using a biro top as a wedge to keep the broken leg section in or out. 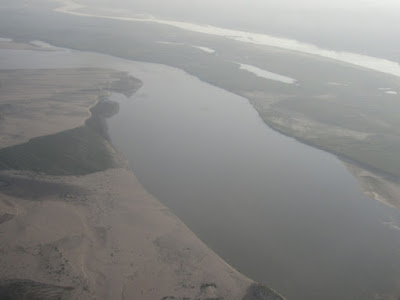 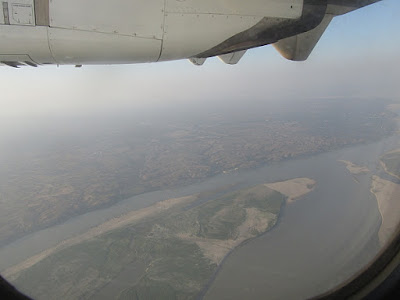 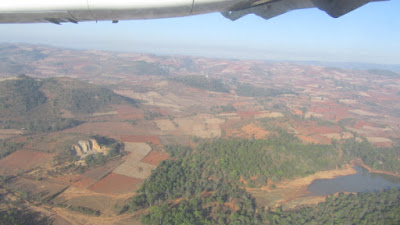 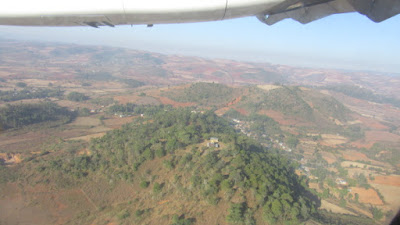 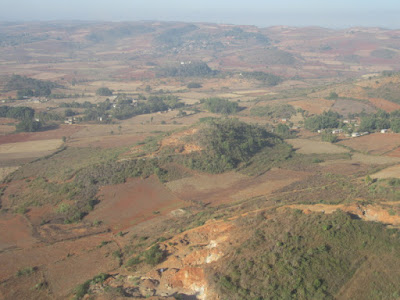 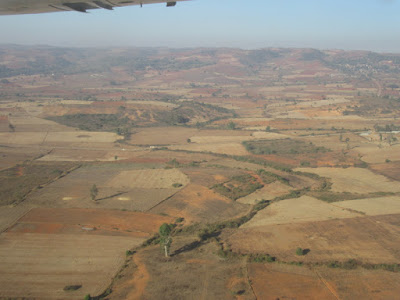 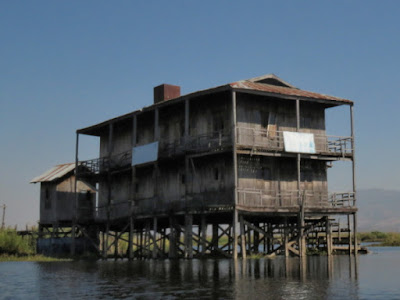 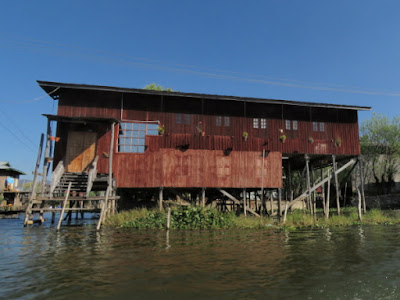 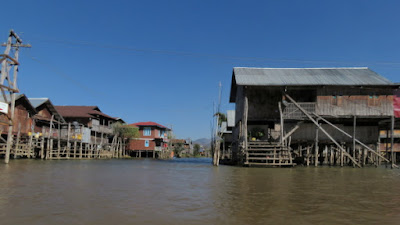 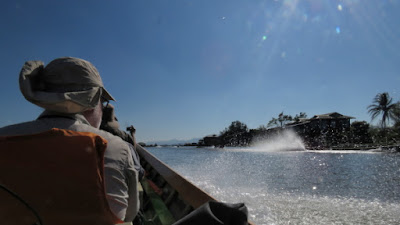 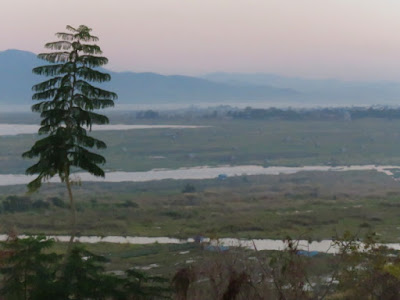 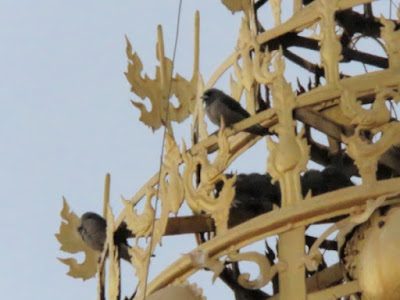 Wednesday 22 January. We had breakfast at 06:00 and then had half an hour on the chalet boardwalk where I caught up with the Bluethroats Barry and Gary had seen the previous evening while Duncan and I walked up to the monastery. At 07:00 we were back in the boat heading for the northern channels. An earlier start would have been ideal but I’m assuming that wasn’t possible for fear of waking other guests. We headed for a Chinese Grassbird territory but it was already quite hot when we arrived and it took some time before one responded and even longer to tempt it into view, albeit briefly. We moved on to the channel we’d first visited yesterday to try for Baikal Bush Warbler and a speaker was placed by the path. One responded immediately and appeared very fleetingly but that was it, leaving us wondering if a more thoughtful placing of the speaker might have had better success. We continued further down the bank adding to our Jerdon’s Bushchat total (helped by being in front of the boat I ended up with 14) but if there were other bush warblers present they were keeping a very low profile and I tried the original bush warbler site with my speaker in a reed alcove but the others were back in the boat before I could give it a decent go. Expecting to be trying somewhere else I was disappointed when it was back out to the open water and some less satisfactory/more distant views of one or two Baer’s Pochard amongst the 30-40 Ferruginous Duck. We returned to the Hupin Hotel at 11:00. I had time for half an hour on the chalet boardwalk before we left for Heho. We stopped at a roadside cafe for an unappetising lunch and 500m further checked several blossoming trees for Collared Mynas, seeing 7 and 3 Chestnut-tailed Starlings amongst many Vinous-breasted. We drove on to Kalaw, a sizeable town, and checked into the Pine Hill Resort at 14:30. We left half an hour later and drove out of town to Kalaw viewpoint where we birded along the road and a narrow trail before watching for swifts at dusk. Highlights were Marten’s Warbler (not knowingly seen before) and a male Daurian Redstart but the hoped for Dark-rumped Swifts failed to show although by then any Apus swift would look to have a dark rump, not that we could claim any as we only saw Himalayan Swiftlets. 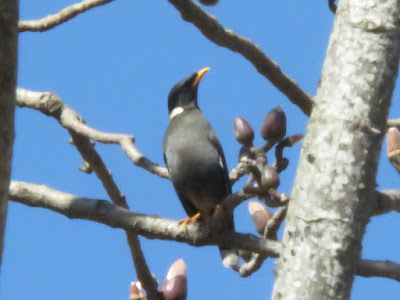 Thursday 23 January. We had breakfast at 06:30, by which time it was already light, and left at 07:00 to be told that Yayayekan Reservoir, the area we’d hoped to visit, was closed for the day due to military training. As a result we started checking some roadside pines on the edge of town and were soon watching 3 Black-headed Greenfinches catching the rising sun in the top of a nearby conifer. We then drove for half an hour to the start of a track leading up a wooded valley. We spent 3.5 hours birding here seeing 2 superb Silver-breasted Broadbills, a very endearing pair of Burmese Yuhinas and Silver-eared Mesias. Otherwise it was a little quiet, the biggest disappointment being a White-gorgetted Flycatcher that wasn’t very responsive and only Gary saw, briefly back-on. We went back into town for lunch. I wasn’t hungry so skipped it but unfortunately there were no birding options until we returned to Pine Hill Resort. There we had two hours of down time and I first wandered up and down the road seeing little before trying the rather limited grounds behind the resort. Highlights there under and amongst the scattered pine trees were Grey-backed Shrike, 2 Brown Prinias, 11 Olive-backed Pipits and a Scarlet Rosefinch although frustratingly I couldn’t locate a calling Black-headed Greenfinch. At 15:00 we drove north out of town walking first along a wooded road beside a valley and then up a narrow valley between cabbage fields and scrub. The former produced Silver-eared Laughingthrush and Spectacled Barwings while a showy male Siberian Rubythroat at the latter was superb, only hearing White-bellied Redstart and Spotted Bush Warbler less so. 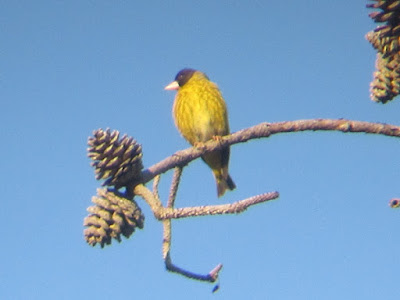 Friday 24 January. Our last day in Myanmar, we were greeted at 07:00 by Ko Pan telling us the military training had finished and we would be able to visit the woods around Yayayekan Reservoir. The not so good news was that he hadn’t been able to negotiate a late check-out as arriving guests had booked our two rooms. That meant returning at 11:30 rather than 13:00 or so as we were flying back to Yangon at 16:05. We were dropped at the head of a trail a short distance out of town, all very reminiscent of late 70s/early 80s trekking in Nepal. We walked down into a valley, the bottom of which had been converted into paddyfields and where Ko Pan spotted a Black-tailed Crake feeding along the far edge. It was my 31st new bird of the trip but sadly was to prove the last. We entered the forest soon after but again had no luck with White-gorgetted Flycatcher which only responded once, distantly, at the first of Ko Pan’s sites. I’d hoped this trip would be third time lucky with the species, having missed them in Northern Thailand and seeing one back-on in NE India, but it was not to be. The forest was generally quiet although we added Asian Emerald Cuckoo, Grey-headed Woodpecker and Slaty-bellied Tesia. It would have been nice to see the reservoir but with our deadline approaching we ran out of time before reaching it. Duncan was keeping tabs on our progress and estimated we were about 500m short when we turned back. As I was already packed I had 20 minutes in the resort grounds where 7 Olive-backed Pipits and 2 Scarlet Rosefinches were seen and again Black-headed Greenfinch only heard. We then left for lunch in a restaurant in town and made two brief stops on the way back to Heho in the remote hope of seeing White-bellied Redstart. The first was by a field occupied by workers digging up ginger and the second a return to the narrow valley where we’d heard one the previous evening. Neither were successful although I flushed what I assumed was a Pin-tailed Snipe at the latter. It took an hour to drive to Heho where Ko Pan helped us checked in. Our flight was on time and Moe was at Yangon Airport to meet us. We returned to the Inyar Lake Hotel with enough daylight, just, for me to see White-throated Kingfisher but not a calling Asian Koel. Moe took us out for a meal and we had a good chat with him about how much we’d enjoyed the trips and his thoughts for the future. He was a thoroughly nice guy.
Saturday 25 January. We had breakfast at 06:15 and I managed five minutes around the lake as it was getting light seeing Purple Heron and again hearing Asian Koel. We left at 06:45 and were at the airport 15 minutes later. Moe left us after helping us check in. Our flights to Bangkok and then Heathrow were on time. We said goodbyes at baggage collection, Barry and Gary heading for long term parking, Duncan for the central bus station and me the underground. I arrived at Victoria just under an hour before my pre-booked train, was at Shoreham-by-Sea at 23:35 and home just before midnight. Thanks to Moe, Ko Thet and Ko Pan Myanmar had been very successful and my companions made it a lot of fun.

Posted by richard fairbank at 20:56 No comments: