28-30 July 2012.  We got the first flight from Kota Kinabalu to Sandakan where we were driven to a jetty on the Kinabatangan River.  Here we were met by Robert Chong and taken 15 minutes downriver to his luxurious Kinabatangan Jungle Camp.  Steve Webb and some other friends of ours had been at KJC at the end of their trip a few days before us and, as arranged, a note was waiting.  We found it somewhat dispiriting.  They'd seen some pittas and Bristlehead at Danum but had had no success with Hose's Broadbill at Poring or Everett's Thrush at Kinabalu.  We soon learned from Robert that only Beatrice amongst them had seen Bornean Ground Cuckoo, the main reason for our visit, which dampened our hopes further, and that he rarely saw Bristlehead (Nick had seen it twice with him 10 years earlier).

Over the next two days we did four river trips with Robert focussed on finding the Ground Cuckoo.  We were unsuccessful and didn't even hear one.  This was not through any lack of effort on Robert's part as he tried calling them out in many areas where he had recorded them previously.  Not a sniff though, which was very disappointing.  Being told that they are apparently easier earlier in the year was little consolation.  The river trips were quite pleasant otherwise, especially those along the smaller creeks rather than the rather busy (with other tourist boats - 14 counted at one point) main river.  One trip extended until after dark with 3 Buffy Fish Owls vying with the most impressive electrical storm I've ever seen for best thing on the river.  Other highlights from the river were Storm's & Lesser Adjutant Storks, Grey-headed Fish Eagle, 6 species of Hornbill including Wrinkled and White-crowned, Blue-eared and Stork-billed Kingfishers, Hooded Pitta, Black & Red Broadbill and White-chested Babbler.

Robert's 'camp' was superb, although very expensive to budget conscious travellers such as ourselves.  It was very well run by Fida who had arranged our booking.  Not that I'd normally mention it, but the food was really excellent too.  There were a couple of trails behind the camp which we spent time on between boat trips.  One year a Ground Cuckoo took up residence on one of them but the best we could manage were Chestnut-necklaced Partridge, Scarlet-rumped Trogon and Rufous Piculet although one evening I flushed a pitta that was almost certainly Giant.

So an enjoyable visit but the birds seen were somewhat underwhelming. 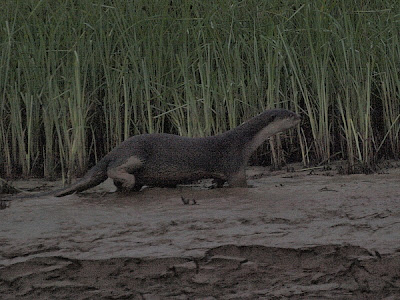 Posted by richard fairbank at 14:14 No comments:

23-27 July.  After what seemed like two days of travelling Nick Preston and I exited Kuching airport at 10pm on 23 July, an hour late.  Rossi, a representative of Cat City Tours was waiting to drive us to Kubah National Park where we checked into a basic room in the hostel an hour later.  Rossi was staying the night too, to drive us around the park for the morning.  It was nice to be able to lie down.

Our guide Yeo Siew Teck arrived early the following morning and Rossi drove us all into the park to an altitude of 1500ft.  Here Yeo played a recording of Blue-banded Pitta which elicited an immediate but rather distant reply.  Yeo persisted but it came no closer and after 20 minutes it was felt better to try elsewhere, it not being practical to leave the road and head in after it.  Two areas visited, along the Waterfall Trail, produced no response but the next, 350m along the Main Trail did, and somewhat closer than the earlier one.  Yeo got us all to tuck ourselves in behind the buttress of a nearby tree out of sight of where the bird appeared to be.  Yeo was now whistling an imitation of the birds call which made it easier to 'reply' to it than using a recording would.  The bird was clearly interested but didn't seem to be coming any closer although Yeo cautioned against trying to look for it telling us that patience was more likely to be successful.  It was a hard line to follow but we did, for 45 minutes, until the bird flew in over our heads and landed just out of view about 10 feet up.  Yeo had warned us that if this happened we shouldn't move suddenly as that would scare it off.  We held our nerve and it soon continued calling.  Yeo then instructed us to move slightly and there it was!  Our most wanted bird of the trip in almost full view little more than 30 feet away.  It was absolutely brilliant.  After about 15 minutes it dropped onto the ground where we saw it briefly before it hopped behind a thick tangle of vegetation and out of sight.  The perfect start to our trip!

We returned to the hostel where we said goodbye to Yeo.  He was an excellent guide and we felt our decision to have a morning birding with him was the best decision we'd made in a long time.  Rossi, for whom the pitta was also a lifer, drove us to the nearest shop to stock up with food - the hostel was self-catering.  He dropped us back at the hostel and we were on our own.  We headed straight back down the Main Trail but despite the pitta still calling we never managed to get that close (it was very hard to tell where its call was coming from).  Still, a brilliant day.

We spent the next three days on the trails and walking up the road (to 2500ft) but only once did we hear Blue-banded Pitta again, very distantly from the start of the Waterfall Trail.  Our time with Yeo was getting better all the time!

We saw some other nice birds at Kubah, the best being Reddish Scops Owl (seen from the road opposite the Frog Pond with Brown Hawk Owl heard there too), Jambu Fruit Dove (twice), Rusty-breasted Cuckoo, Red-billed Malkoha, Rufous-backed Kingfisher, Rufous Piculet, Green and Black & Yellow Broadbills, Maroon-breasted Philentoma, Scarlet-breasted, Yellow-breasted & Yellow-rumped Flowerpeckers (unfortunately I missed the first), Fairy Bluebird, Chestnut-naped Forktail, White-crowned and Rufous-tailed Shamas and Rufous-chested Flycatcher.  We particularly enjoyed the Frog Pond after dark, although early evening rain put us off from visiting it until our last evening and then I forgot to take my camera.

Photography was always going to be difficult and on a trip almost entirely in forest I didn't take my normal telescope and tripod so digiscoping was out. 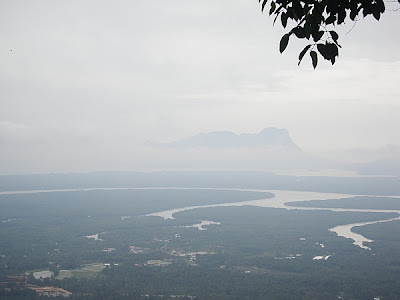 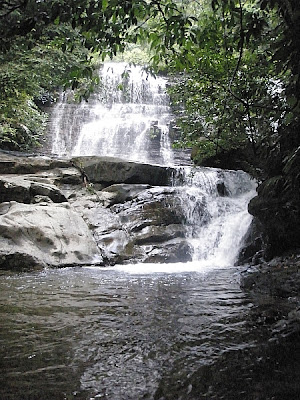 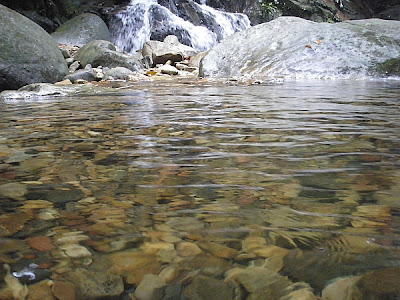 Posted by richard fairbank at 14:10 No comments:

25 years ago Nick Preston and I spent almost 4 weeks birding in Sabah.  In 1987 we did not know about the very recently opened Danum Valley Field Centre, neither did we know enough about Poring Hot Springs to make us feel a visit there would be worthwhile so our trip was based around Sepilok and Kinabalu National Park with a visit to Gomantong Caves.  We had a good trip and saw some excellent birds but it was hard work and a few major ‘gaps’ remained, in particular Blue-banded Pitta and Bornean Bristlehead.  A return to Borneo remained on the back burner until 2002 when Nick returned on a trip I was unable to join.  They visited Danum and Poring but still no Blue-banded Pitta although Nick did see the Bristlehead and the then unsplit Banded Pitta.

Meanwhile Blue-banded Pitta was climbing into my top five ‘wanted’ birds ...  In late 2010 I saw the stunning photos of it on the Dig Deep blog taken at Kubah National Park (see http://digdeep1962.blogspot.co.uk/search/label/Kubah).  A return to Borneo was back in the frame and with the splitting of the Bornean race of Banded Pitta and regular sightings of Bornean Ground Cuckoo along the Kinabatangan River we decided on a return in July 2012.  It was perhaps not the best time to go but at least work commitments allowed us more than two weeks then.  We based the trip around maximising the chance of seeing Blue-banded Pitta and a few other subsidiary targets.  A visit to Kubah was a must and internet searches suggested that Yeo Siew Teck (birdguide and Tour Manager for Cat City Holidays http://www.catcityholidays.com) had been successful in showing several birders the pitta.  Yeo was contacted and quickly booked accommodation in Kubah and arranged transfers to and from the airport for us.  We also hired him for our first morning to look for the pitta so we would at least know the best areas to concentrate on in our time there.  We then booked flights, two nights on the Kinabatangan River with Robert Chong (Mr Ground-Cuckoo), a week at Danum Valley Field Centre and a car for our last week when we intended visiting Poring, Kinabalu and the Rafflesia Centre in the Crocker Range.  Before we knew it we were off …

Posted by richard fairbank at 13:06 No comments:

Monday 16-Friday 20 July: one Peregrine on the chimney most days on way to or from work, 3 pairs of Ringed Plovers on the beach, one with a fully grown juvenile, one with a now largish chick and one still in the area.  Two Mistle Thrushes on  Southwick Green and up to 35 Swifts over our road.  On Tuesday while watching the Swifts a juvenile Peregrine put on a spectacular flying display that included a couple of trial stoops.  Brilliant.

Saturday 21st: My usual circuit produced 3 Common Scoter E ,a Dunlin ,9 Turnstones and 6 Sandwich Terns at Shoreham Fort, the Mute Swan family with 5 almost fully grown cygnets at Widewater and a Whimbrel, 15 Redshank, a Mediterranean Gull, 3 Reed & 2 Sedge Warblers and 2 Reed Buntings on the Adur.  Later a walk around Truleigh Hill with Megan was very pleasant but few birds were seen with 3 Corn Buntings heard the highlight. 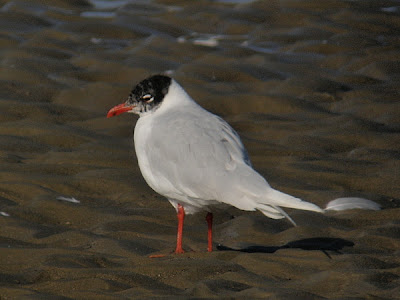 Posted by richard fairbank at 13:53 No comments:

Cycling to work one or two Peregrines were on the Power Station chimney each day and Ringed Plovers were seen on three days, when looked for.  On Thursday 3 pairs were present, one with one full grown youngster (hopefully the other was hiding), one with a half-sized chick (I'd only seen this pair with one) and one acting suspiciously.  Up to 30 Swifts were seen over our road/house most evenings and a Mistle Thrush on Southwick Green three times.

Saturday 14th.  The usual half hour seawatch was all I could manage off Shoreham Harbour with just 14 Gannets and a Kittiwake moving.  Five Turnstones were on the beach while the gulls by the Yacht Club included colour-rings Herring LU7T seen on the Adur on 21 April and ringed at Rainham last November.  Last weekend's Sedge Warbler was still singing well by the Adur but the tide was too high for much else.  Megan and I visited Pulborough where we dodged the showers but the water level was very high and the only waders we saw were single Little Ringed Plover and Green Sandpiper.  A Nightingale was calling but remained hidden while a family of Wrens provided some entertainment.


Sunday 15th.  Few gulls were seen on the Adur at a not particularly low tide with only a vestigial sandbar exposed although a Sandwich Tern was some compensation.  Two Whimbrel and a Black-tailed Godwit were seen, perhaps those that were around last weekend.  A young Wood Pigeon was 'introduced' to our bird table by its parents while the Collared Doves brought 4 young. 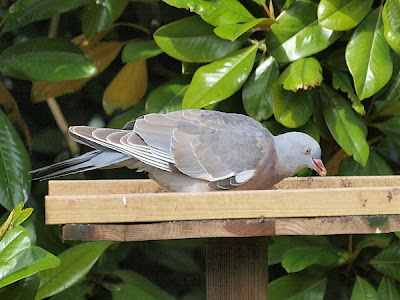 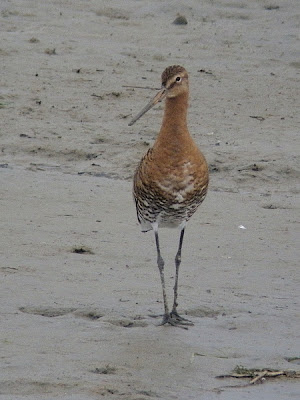 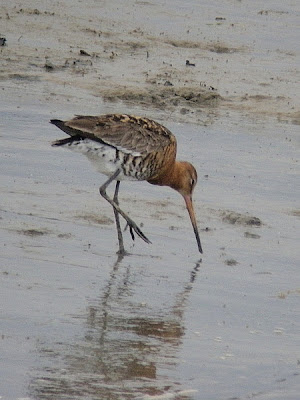 This bird was feeding in exactly the same part of the Adur (just south of the old toll bridge on the eastern bank) as the Black-tailed Godwit that spend two weeks there in May.  As it is a very uncommon species on the Adur one might wonder if it could be the same bird but the earlier one was not in breeding plumage and had a longer bill.  The bill length could be be individual variation but is more likely to be linked to sex (females have longer bills than males with little overlap) and/or race (limosa being longer billed than islandica).

Posted by richard fairbank at 21:22 No comments: