Thursday 22 October. Megan and I took Cookie up to Southwick Hill after visiting the tip. We saw a Jay, 8 Sky Larks, a Chiffchaff (2-3 others heard) and I had a fleeting glimpse of a small greyish warbler with white outer-tail feathers that might have been a late Lesser Whitethroat. Before the tide came in too far I cycled down to Town Quay and up the Adur towards Cuckoos Corner seeing 13 Oystercatchers, 43 Lapwings, 19 Turnstones, 6 Redshank and on/from the Old Toll Bridge Black Redstart and Rock Pipit. Nothing caught my eye scanning through the 400 or so gulls seen although Common Gulls were just into double figures. Later while mowing the lawn a Buzzard flew over the house.

Wednesday 21 October. News late the previous evening of a presumed Stejneger's Stonechat at Medmerry found by Peter Alfrey had me departing pre-dawn in fairly heavy rain. I drove to Earnley, missing the turning and ending up in East Wittering before realising my error. Turning back I missed it again and when I finally arrived was a bit surprised to find the car park empty and no other birders present. I wandered around in the rain for half an hour before becoming concerned that I was on my own. Checking the bird's 'dropped pin' on my phone I couldn't reconcile the field shapes and quickly realised they weren't by the Stilt Pools car park at all. Not a great start, I'd come to the wrong place! I quickly drove around to the Easton Farm car park, not somewhere I'd been before, and found a rather bedraggled looking Matt Eade and Jake Everitt with locals Bart and Sarah nearby. There had been no sign of any stonechats in their preferred field but the rain wasn't helping. Jake reluctantly left for work and Matt and I wandered along the bank. We saw a Dartford Warbler fleetingly but little else. After half an hour the rain eased somewhat and a few Stonechats appeared in the field. Matt soon picked out the putative Stejneger's Stonechat at the back of the field. Despite the rain it was easy to pick out from the other stonechats - its rufous rump and dark upperparts contrasting with pale underparts and white throat looked very convincing. It also appeared much more active making regular flycatching sallies of 10-15m before returning, often to the same perch. Matt put the news out, damp fingers prevented me from unlocking my phone, and after obtaining some record shots we returned to to our cars to dry off lenses etc. With the rain easing off again we returned to improve on our photos and Matt was now on DNA alert, currently the only way to officially differentiate Eastern Stonechats. I watched the bird for another couple of hours although it went missing for part of that time following a Sparrowhawk flythrough. Matt was determined to retrieve a DNA sample and I left him to it. He was finally successful after eight hours, an excellent effort. Very nice find by Peter Alfrey too. Birders have done their bit, now it is over to the men in white coats ... 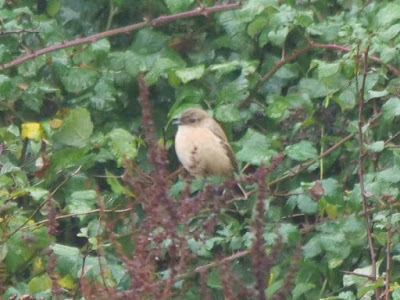 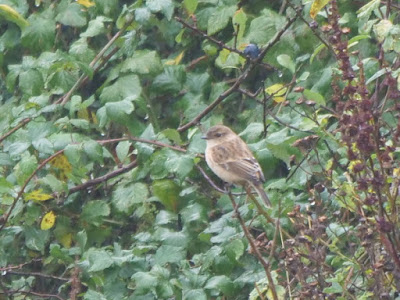 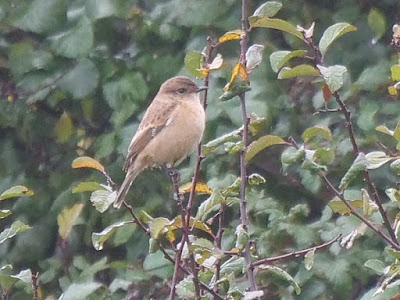 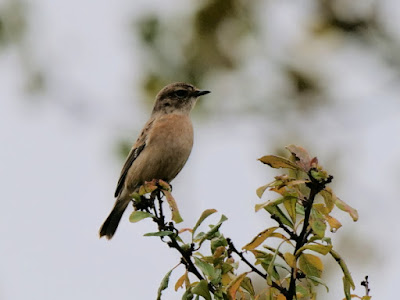 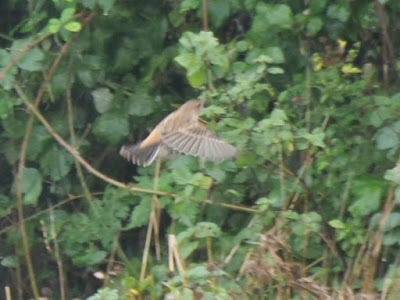 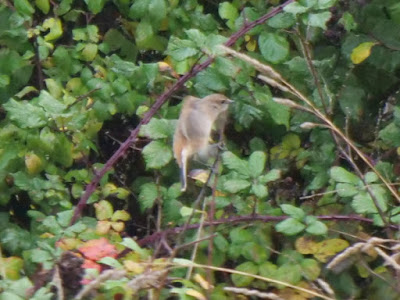 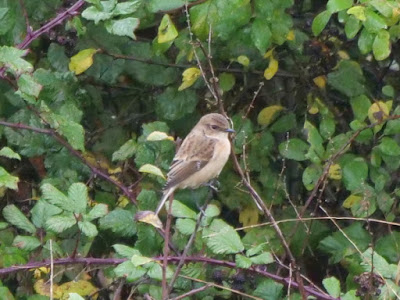 Tuesday 20 October. A morning low tide visit to the Adur looking for the very smart looking Caspian Gull seen at dusk the previous day by Matt Palmer was unsuccessful but an adult Yellow-legged Gull and two colour-rings (one new and one a repeat sighting) made the visit worthwhile. I then met Megan and Cookie at Mill Hill where a single Swallow was the only migrant seen. The adult Yellow-legged Gull was still present when I returned to the Adur as was a rather more puzzling individual I took to be a near adult. Two Grey Plovers were also seen. 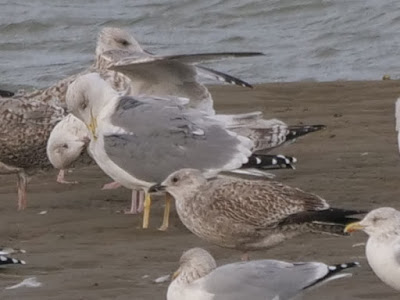 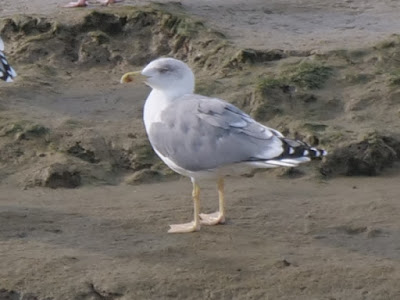 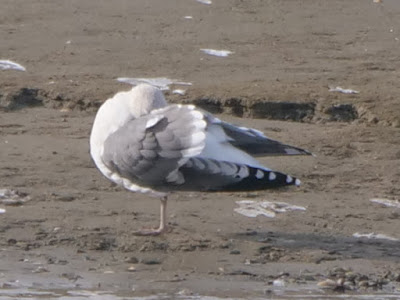 Posted by richard fairbank at 16:26 No comments:

Monday 19 October. I arrived at Shooter's Bottom, Beachy Head at 07:25 to make the most of the free parking up to 8. It was very quiet with nothing flying over and only a few Chiffchaffs seen. As I was walking back through the SE quadrant I saw a small bird sat in a bush 15-20m away. Expecting it to be a Robin I was surprised to see it was a bunting, more so that it looked very colourful on the head. Thinking it was a Little Bunting I fired off a burst of 9 photos. The automatic review of the last showed it to be very dark so I quickly reduced the shutter speed to take some more but the bird had vanished. I slowly approached the bush and tried some playback of Little then Reed Bunting calls. Nothing. Reviewing my images it was hard to make out much detail but they did not appear to show an eye-ring and looked to be quite heavily streaked below and I started doubting my identification. Further looking failed to produce another sighting and I assumed it had flown off. Seeing John and Doreen Cooper on the walk back to the car I only mentioned it as an afterthought and promptly forgot it. I remained at Beachy (and Crowlink) to 15:30 during which time I'd seen virtually nothing - 3 Sparrowhawks, 2 Buzzards, 2 Green Woodpeckers, Jay, 4 Ravens, just 3 Swallows, 10 Chiffchaffs, 8 Goldcrests, 26 Stonechats, 21 Pied Wagtails, 120 Linnets and 40 Goldfinches. I'd also heard single Redpoll and Siskin but failed to see them. Easily my worst visit this autumn and I didn't even bother writing up my notes until after 22:00. Looking at the bunting images I was able to brighten them enough to begin to wonder if I'd been right about it initially. Reading up reminded me a whitish wing-bar was diagnostic for Little and the streaked underparts I'd been worried about a red herring while the lack of apparent eye-ring might have been due to an unfortunately positioned branch hiding its eye. I sent a couple of images to Dave Cooper who sees Little Buntings most years (my last was in 1994!) and he responded very positively, even pointing out that the smallest part of a white eye-ring was visible. Dave also managed to brighten my images further and close to midnight I posted very belated news of the Little Bunting sighting. Not such a bad day after all.

Posted by richard fairbank at 15:53 No comments:

Sunday 18 October. I took Cookie up to Mill Hill. We saw 2 Sparrowhawks, 2 Chiffchaffs, a Blackcap, a Firecrest, 2 Goldcrests and a Redpoll which flew east. While there I received news that Jamie Wilkinson had found a Pallas's Leaf Warbler at Roedean. Frank went and when I got home he told me it was periodically gave good views. Being a firm favourite I went, being stopped at every traffic light and pedestrian crossing along Brighton seafront. It was very active but on one occasion remained gleaning around a bunch of leaves for a minute or so. Brilliant. Also present were 2 Chiffchaffs and at least 6 Goldcrests. 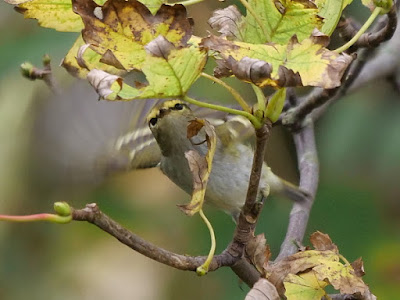 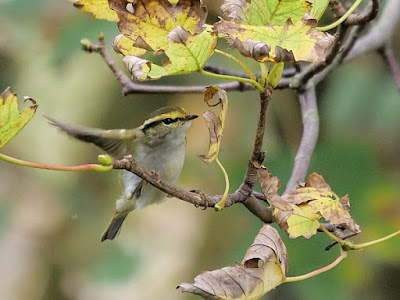 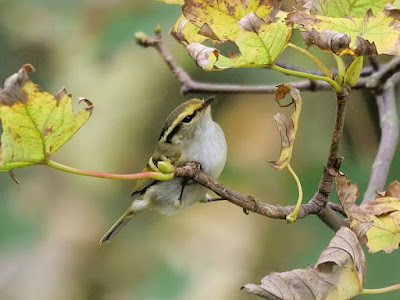 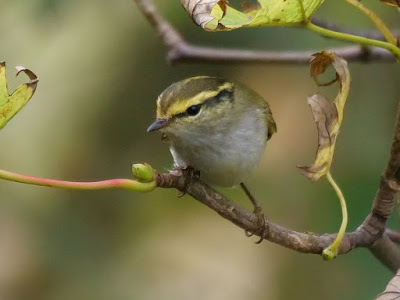 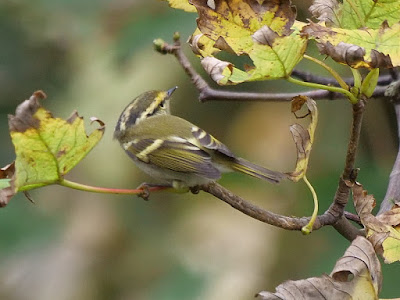 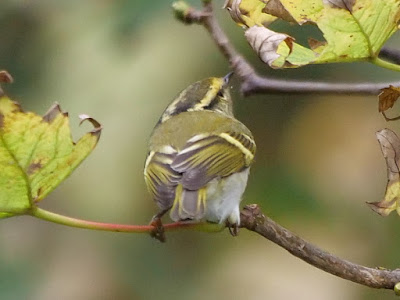 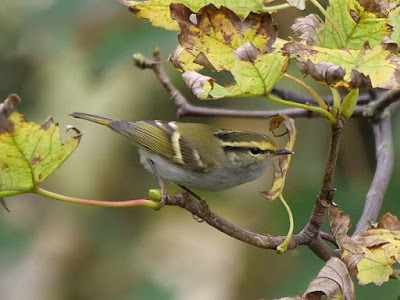 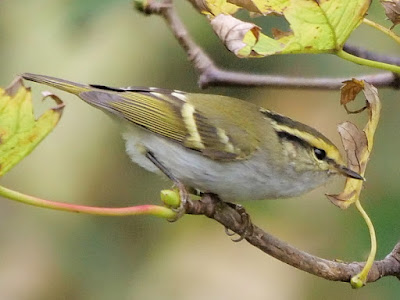 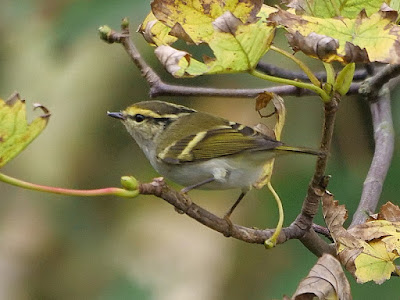 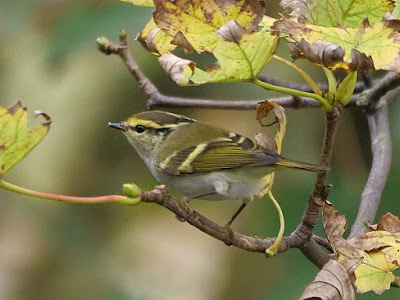 Saturday 17 October. I overslept but was still at Shooter's Bottom by 07:25. It was deadly with just a Buzzard and 2 Siskins over during the first half hour, not even a Chiffchaff heard. David Buckingham sent me a message asking if I'd seen RTBR in Britain. Rufous Bushchat in 'old money' and certainly not, virtually no one had. It was at Stiffkey and he was keen to go. I was more than happy to join him, especially as there were also Pallas's Leaf Warblers and Red-flanked Bluetails nerby. Anything to get out of another 9 hours slogging around Beachy (although as it turned out Matt did pretty well). I met David and John King at Hickstead and we drove up to Stiffkey finding a vacated space halfway down Green Way. We hurried down onto the saltmarsh, exchanging brief pleasantries with old friends, some barely recognisable behind facemasks and with reasonable social distancing twice had decent views of the Rufous Scrub Robin, a bird I'd never imagined seeing in Britain. Nigel Redman had told us where the Pallas's Leaf Warbler was and after a 10 minute walk and wait of similar duration we had good views amongst 10+ Goldcrests. Our final destination was Holme Golf Course and car park where we saw at least 2 and possibly 3 or the 4 Red-flanked Bluetails present but I always seemed to be a few minutes behind the curve and didn't have excellent views of any. David did better staying in the car park. We left at dusk, called in briefly on David's mother in Thetford and I was home at 22:00. The best day's birding I've had all year. 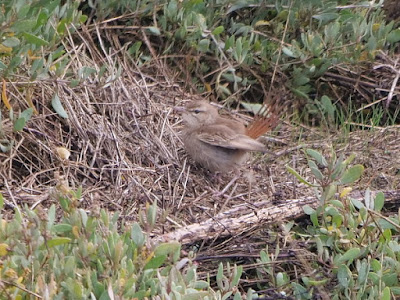 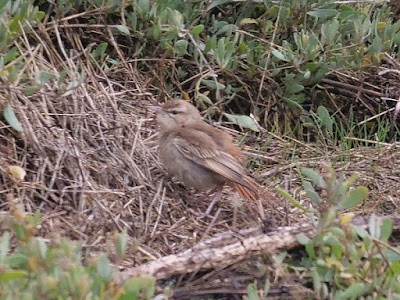 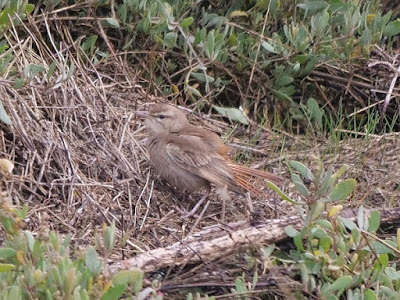 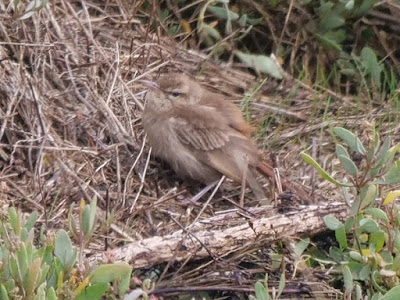 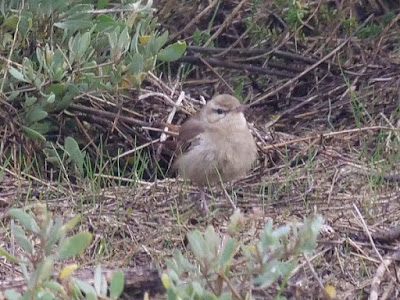 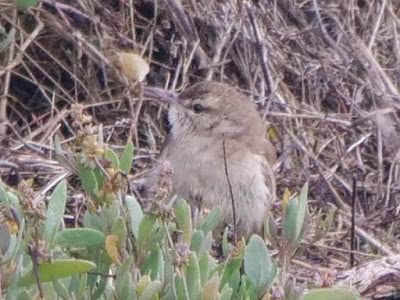 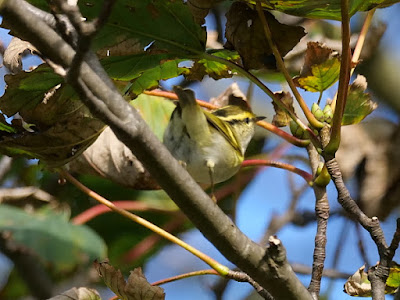 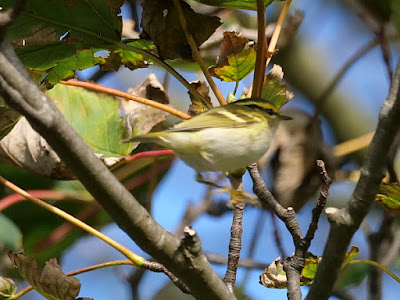 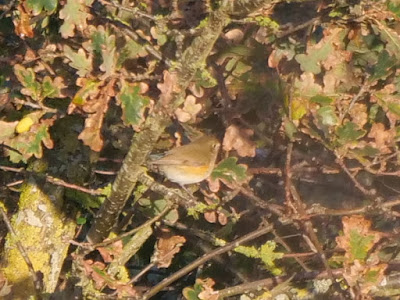 Friday 16 October. I was at Beachy from 07:10-16:10. I did three circuits, the first along the Cliff Path, into Frances Bottom, Cow Gap, Whitbread Hollow, up through the rides, Hotel bushes, Z-bends, down to Shooter's Bottom and back up Bulling Dene. Then from Birling to Belle Tout and Michel Dene and finally a short visit to Crowlink. I saw Sparrowhawk, Buzzard, Short-eared Owl, Merlin, Peregrine, 3 Ravens, 200 Swallows, 50 House Martins, 13 Chiffchaffs, 2 Dartford Warblers, 12 Goldcrests, 14 Ring Ouzels, 3 Fieldfares, Stonechat, 12 Pied Wagtails, Rock Pipit, Brambling, 80 Redpolls, 775 Goldfinches and 14 Siskins. A decent list but it felt rather disappointing, particularly the last two sites which added nothing. 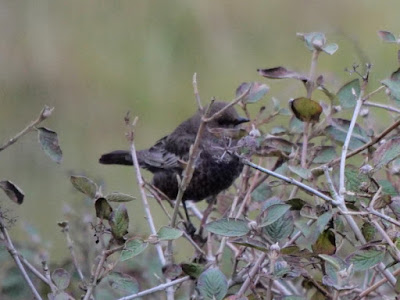 Thursday 15 October. I went up to Mill Hill at dawn and had done a circuit when Megan brought Cookie up. Identifiable overhead passage (going N/E) included 12 Sky Larks, 6 Swallows, 2 House Martins, 2 Redwings, a Mistle Thrush, 8 Meadow Pipits, 4 Pied Wagtails, 47 Redpolls, a Crossbill and a Siskin. Also seen were a Sparrowhawk, Jay, Blackcap, 10+ Robins and 8 Dunnocks while a single Chiffchaff was heard. Little was seen during a quick look at Widewater on the way home (the Grey Phalarope had moved on). Late afternoon I took Cookie down to the Adur at low tide. We saw Oystercatcher, Grey Plover, 16 Ringed Plovers, Bar-tailed Godwit, 7 Dunlin, 6 Redshank, 100+ Herring Gulls (including a North Thames bird) and a Chiffchaff.

Posted by richard fairbank at 22:35 No comments: