This is the concluding part of the blog of my visit to Thailand with Dick Filby, Richard Grimmett, Frank Lambert and Colin Winyard.


1 January.  The new year started badly when we found our car had been broken into during the night and various items, including my camera and more irreplaceably Colin’s notebook had been stolen (presumably mistaken for a wallet).  We had all been sleeping near the car but hadn’t heard a thing!  We spent the morning in Krabi reporting the theft and were not impressed to be told by the police how easy Toyota Corellas were to break into.  We spent the rest of the day driving south to Kachong where a Short-tailed Babbler was seen before dark.  There were lots of local tourists at Kachong but on producing our letter from Dr Boonsong we were given accommodation and a guide!

2 January.  All day at Kachong where there was a distinctly Malaysian feel to the birds seen, many of which were towards the northern limit of their range.  There seemed ot be lots of birds about and I saw almost 50 species, although perhaps without any of exceptional quality.  I managed 2 Blyth’s Hawk Eagles, 19 Silver-rumped Swifts, 3 Gold-whiskered Barbets, 6 new bulbuls including Scaly-bellied and 3 Grey-bellied, Long-billed Spiderhunter and 2 Everett’s White-eyes.


3 January.  A full day at Kachong going to the top of the Waterfall Trail.  This was my best day of the trip as although I only saw 20 species they included male Red Jungle Fowl, 2 Maroon Woodpeckers, male Siberian Thrush (briefly on the forest floor when I wandered up a ravine), a female Orange-headed Ground Thrush I described as being ’cosmic’ (well it was the early 80s), male Chestnut-naped Forktail, 15 Streaked and 2 Eye-browed Wren-Babblers and 4 Spot-necked Babblers.  We had been contemplating driving south into Malaysia and the Cameroon Highlands but with 8 days of the trip left it would have been a lot of extra miles to cover and we sensibly abandoned the idea.  My having seen Siberian Thrush, albeit briefly, might have had something to do with my reduced enthusiasm for such a dash!
4 January.  Another full day at Kachong.  We kept to the lower part of the park but it was a bit flat after yesterday.  My highlights were a male Green Broadbill, Siberian Blue Robin and 60 Fairy Bluebirds.


5 January.  We spent an enjoyable morning at Kachong seeing 2 Bushy-crested Hornbills, 6 species of barbet, female Green Broadbill, an amazing Forest Wagtail, Eyebrowed Thrush and a female Chestnut-naped Forktail.  We then drove to Krabi seeing 14 Dollarbirds hunting in the rain before it got dark.  Having the car broken into rather put us off bus shelters and we found a hotel for 2 nights.

6 January.  We spent most of the day in jungle 20km north of Krabi.  Birds seen included 4 Black Bazas, Bat Hawk, 2 Black-thighed Falconets, Rufous Piculet, Banded Woodpecker and 4 Eastern Crowned and 2 Pale-legged Leaf Warblers.  We then spent the rest of the day finding a beach nearby where we stayed until dusk seeing 2 Malaysian and 10 Kentish Plovers.
7 January.  We birded in the morning in the jungle north of Krabi seeing yesterday’s 4 Black Bazas and 2 Black-thighed Falconets and adding a superb male Scarlet-rumped Trogon, Buff-rumped and Black & Buff Woodpeckers and 2 Sultan Tits.  We then drove to Phuket and finished the day on the town beach just before dusk where we saw a selection of commoner waders.  We camped at Naihan Beach, three nights in a hotel would have been pushing the boat out too much!

8 January. All day at Naihan Beach, watching 200+ frigatebirds and a White-bellied Sea Eagle from the point in the morning and relaxing in the afternoon.  We then drove north overnight, stopping about 30 km short of Ranong where we slept in a roadside stall.

9 January.  Mainly a travel day, a look around where we’d slept produced 6 Black Bazas and a Grey-eyed Buzzard but was generally poor so we continued north to Khao Sam Roi Yord where we visited the marsh at dusk.  Here there were lots of egrets and a male Eastern Marsh Harrier.  We stayed in the same hotel in Pranburi.
10 January.  We spent the morning at Khao Sam Roi Yord where amongst 24 species of waders we saw the same 2 Great Knot as on our way south on 30 December, but only one Nordman’s Greenshank.  We then drove north to the saltpans south of Samut Sakon for the afternoon.  More waders there included 120 Red-necked and 18 Long-toed Stints and 5 Broad-billed Sandpipers.  We returned to Bangkok where we found a cheap hotel, and kept the windows closed although the buzzing of just one mosquito was very annoying. 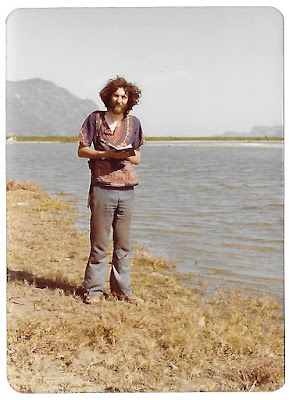 11 January.  We dropped the car off, had a final quick look around Lumpini Park, where a White-crested Laughingthrush seemed most likely to have been released, and caught a bus to Don Muang International Airport.  Our Bangladesh Biman Flight landed in Rangoon at dusk where 8 Black Drongos were feeding around the airport lights.  We landed at Dacca to discover our return flight had been delayed, claimed our bags and were taken to a hotel.

12 January.  After breakfast, which fortunately did not seem to include Purple Gallinule as two were captive in the hotel courtyard, we were taken back to the airport and a succession of delays to our flight allowed us time for some final birding.  We saw Lesser Golden-backed Woodpecker, Citrine Wagtail, Blue Rock Thrush, Bay-backed Shrike (presumably the same as on the way out) and 25 Chestnut-tailed Starlings.  At some stage our Boeing 707 arrived and we boarded but from my window I could see one of the engine casings was off and a local mechanic was working on it with what appeared to be a screw-driver.  After a while a white guy in a uniform walked up and what appeared to be a big argument ensued.  The white guy seemed to go off in a huff, hardly reassuring for us passengers, and soon after the engine casing was put back.  We finally left at 23:00, more than 24 hours late, again.  As we sped down the runway I could read the distance markers to the end of the run-way.  We had just past 100m when we lifted off.  Teach me to ask for a window seat!

13 January.  We stopped in Dubai at some time in the middle of the night where I noticed the engine casing was again off.  I was quite relieved to finally arrive back at Heathrow at 09:00 and I was home for lunch.  A very enjoyable trip, made more so by excellent companions Dick Filby, Richard Grimmett, Frank Lambert and Colin Winyard.  It cost me about £430 and I’d seen almost 450 species of which 80 were new.  In hindsight perhaps we would have been better off heading south first and leaving the north of Thailand until later when more winter visitors might have arrived although it probably would have made little difference.  The way we did it left open the option of heading into Malaysia but that had probably always been an ambition too far.