On 5 October 2014 while checking through the gulls on the River Adur at low tide I saw a green colour-ringed gull that I took to be a fairly classic first-winter Caspian.  The CR-birding web-site indicated that it had been ringed in the Lausitz area of East Germany, near Polish border, in a mixed colony where Caspian Gull dominate although hybrids are possible.

Disappointingly submission of the ring details have as yet, over 3 weeks later, produced no response so a trait score seems the best way of determining whether it might have some hybrid influence (not that I could detect any from my very limited experience of the species). The ground-breaking reference Identification of Caspian Gull. Part 2: phenotypic variaility and the field characteristics of hybrids by Chris Gibbins, Grzegorz Neubauer and Brian J Small was published in December 2011 in British Birds (104 :702-742). Trait scoring can be applied to first-winters between October and March, so no excuse for me not to try.

Scores are applied to ten characteristics for first-winters with pure Caspian Gulls (of known parentage) scoring 12-25, known hybrids 22-32 and Herring Gulls 29-37.  The lower the scores the better with an overall score of under 22 almost certainly ruling out a hybrid.  Here goes:


The total trait score calculated above is 16.  This places the bird firmly in the range of pure Caspian Gull (12-25) and well outside that of a hybrid (22-32).

This bird also ticks the boxes for the other features not included in the trait score but that I'd hope to see on a potential Caspian Gull:

I've waited a long time to see a Caspian Gull on the Adur that I was really happy with.  This very smart looking bird ticked all the boxes for me and I had the added bonus of Paul and Briget James seeing it before it flew off too.
Posted by richard fairbank at 23:07 No comments:

Sunday 26th.  Another morning at Beachy with the usual suspects where the Red-breasted Flycatcher had exceeded all expectations in still being present.  It was again easily the day's highlight.  Also seen on a quieter and much windier day were a Merlin, 1000+ Stock Doves, 2 Tawny Owls, 30 Sky Larks, 4 Swallows, Blackcap, 4 Chiffchaffs, Goldcrest, firecrest, 2 very showy/vocal Ravens  and 70 Goldfinches.  The Stock Doves were in a huge straggling flock that came up from behind Cornish Farm with most heading NE although at least 200 came back and dropped into stubble fields.  About 300 Herring Gulls, 30 Sky Larks, 600 crows (mainly Jackdaws) and 400 Starlings were also constantly being disturbed and flying around.  Although we did not see it at the time a falconer was later seen with his falcon.  In the afternoon Megan and I went to Rackham where a small bird flock included Firecrest, Marsh Tit, Nuthatch and Treecreeper with two male Mandarins and a flock of 50 Goldfinches in Parham Park. 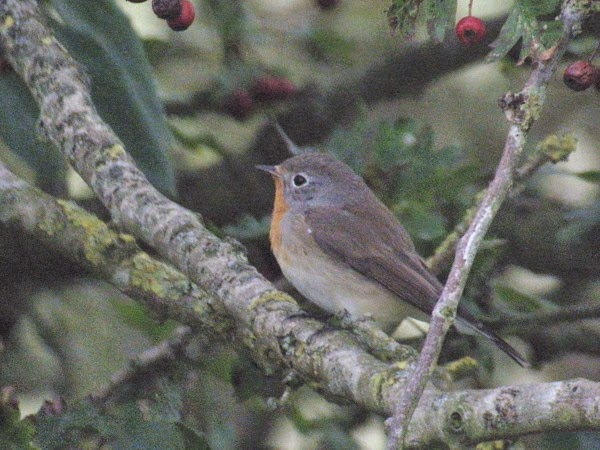 Saturday 25th.  Most of the day at Beachy with John King,  John & David Cooper and Brenda Kay.  We did our usual route starting at Birling, arriving at the Red-breasted Flycatcher when the crowd had dissipated somewhat and the sun was trying to come out.  it was easily the day's highlight but we also saw 2-3 Merlins, Tawny Owl, 33 Sky Lark, Ring Ouzel, 3 Dartford Warblers, 2 Blackcaps, 13 Chiffchaffs, Firecrest, 3 Goldcrests, 2 Ravens, 12 Jays, 1230 Goldfinches and 15 Reed Buntings.  I failed to see any hirundines (or Bramblings) and went on to try my luck at Crowlink.  A Black Redstart made the visit worthwhile and I also saw 2 more Chiffchaffs, 3 more Goldcrests and 2 more Ravens.  Light winds and some sunshine,along with the company and birds, made it a very enjoyable day . 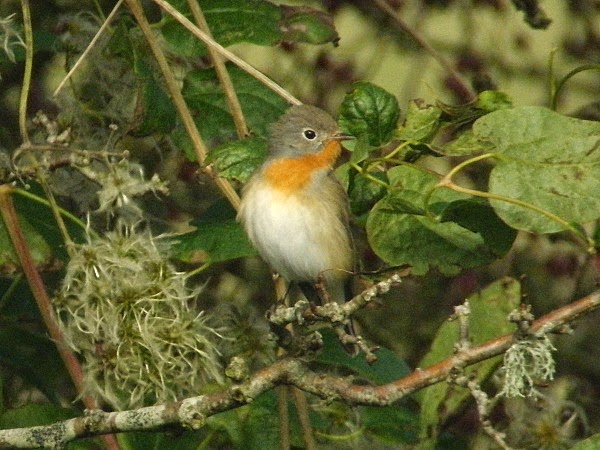 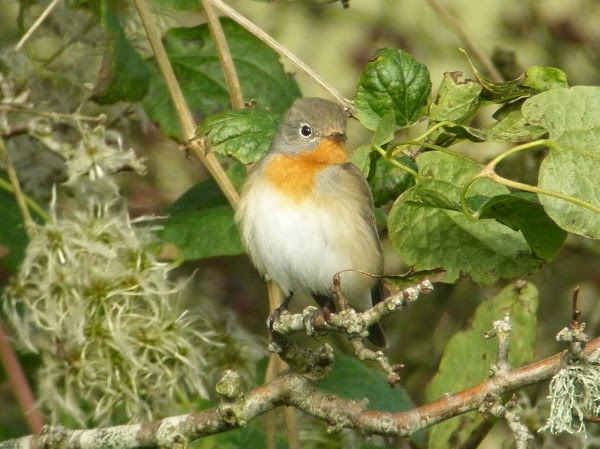 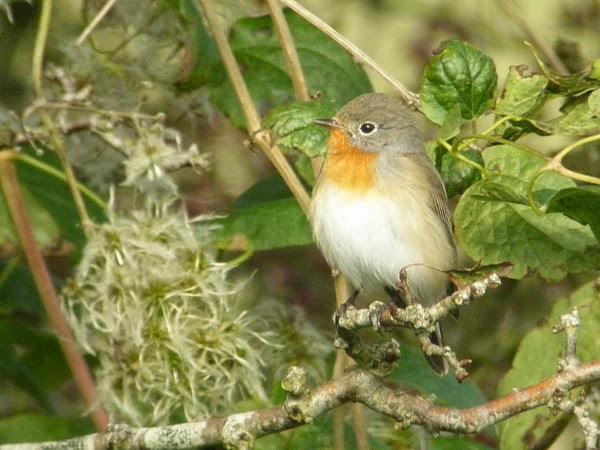 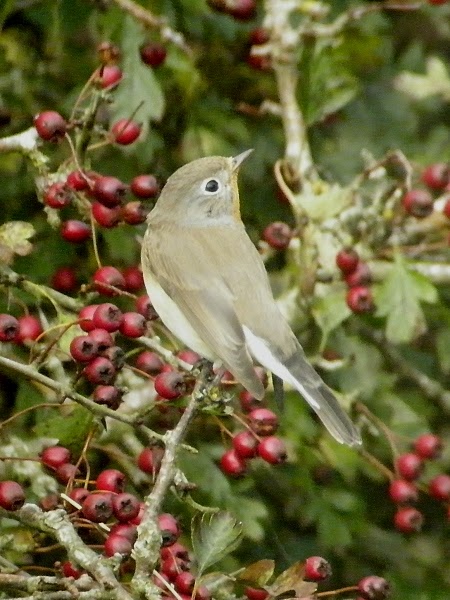 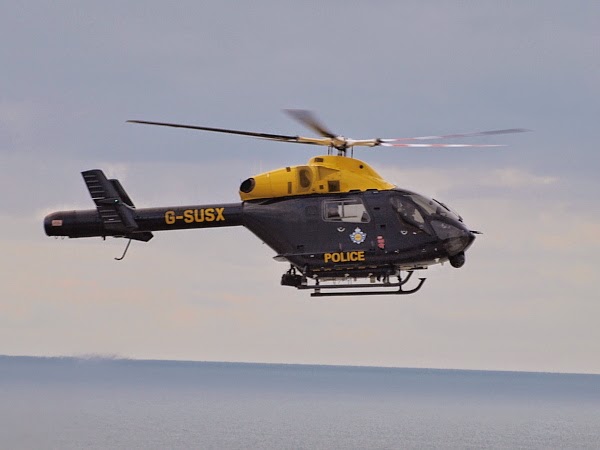 Friday 24th.  A lunch-time visit to Beachy where the Red-breasted Flycatcher was seen in appalling conditions, my first adult male in Britain.  A adult Mediterranean Gull was on Southwick Beach on my way home - the last time I'll be doing the journey in daylight for several months.

Wednesday 22nd.  A adult Mediterranean Gull was on Southwick Beach on my way home.

Monday 20th.  A Peregrine on Southwick Power station in the gloom on my way to work.

Sunday 19th.  A morning walk around Cissbury with Megan was quiet with one Ring Ouzel glimpsed, 4 Chiffchaffs, 2 Goldcrests and a Treecreeper.  A low tide visit to the Adur in the afternoon produced a juvenile Brent Goose looking a bit lost, Kingfisher, Curlew and Mediterranean Gull.


Posted by richard fairbank at 20:45 No comments:

Saturday 18 October.  I spent most of the day at Beachy and Crowlink, much of it with the full compliment of usual suspects (John King, John and David Cooper and Brenda Kay). Very pleasant walking around in mild if somewhat windy weather.  A good scattering of Ring Ouzels, at least 30 in total with 7 in Shooter's Bottom, 3 in the old trapping area, 15-20 in Cow Gap, 3 east of Belle Tout and one at Crowlink.  Unusually some were seen feeding on paths.  I heard a single scold from a Dartford Warbler west of Shooter's Bottom (at the second attempt) and a Hobby flew east over Crowlink.  Hopes of finding a Yellow-browed Warbler were hindered by only seeing 8 Chiffchaffs.  Other migrants were a single Wheatear, 75 Swallows and a House Martin while a Merlin added a taste of winter.  four Jays and 3 Ravens were seen and a flock of 800 mainly Greater Black-backed Gulls roosting off Crowlink included 4 colour-ringed birds, all just too far away to read although one was a North Thames bird.

Monday 13 October.  Peregrine on Southwick Power Station and Herring Gull A4AH at the university.
Posted by richard fairbank at 20:34 No comments:

Sunday 12 October.  This date last year was my best ever for Ring Ouzels with over 400 seen in the Beachy/Crowlink area.  A repeat was VERY unlikely but a bit of east in the forecast gave me some encouragement of seeing at least one or two before the afternoon rain arrived.  I met John King at Birling at 07:15 and we covered most of the areas on Beachy Head.  We did see two Ring Ouzels, one in Shooter's Bottom and one in the Hotel Garden.  They were my first of the year, but an impressive passage of Goldfinches (c900E) was probably the day's highlight.  We also saw 2 Golden Plover, 41 Stock Doves, 39 Sky Larks, 80 Swallows, 26 House Martins, 21 Pied Wagtails, 17 Stonechats, Wheatear, 3 Blackcap, 38 Chiffchaff, 4 Goldcrest, 4 Jay, a flock of 17 Magpies, 6 Ravens, 110 Linnets, 7 Reed Buntings and 3 Yellowhammers.  On my way home, with last year in mind, I had a quick look around Crowlink, seeing 12 Stock Doves, 10 Swallows, 2 house martins and 8 Chiffchaffs before it started raining.  Also at Crowlink a 'flying away' view of the radio tagged, jessed, escaped large falcon that had been seen in late September.


Saturday 11 October.  Heavy showers forecast from mid morning made looking for the Tawny Pipit near Newhaven Tidemills first thing seem like a good option.  It was still present and I also saw 50 Swallows, a Whinchat, 3 Wheatears, 2 Whitethroats, 2 Blackcaps, 11 Chiffchaffs and a Raven.  I left at 10:00 when the pipit flew out of sight over the warehouses with black clouds rapidly approaching from the southwest.  With a reasonable selection of migrants around I headed for Seaford Head barn, being a closer option than Birling, and after a short wait for a heavy shower to pass over I walked the Hope Gap/Harry's Bush circuit.  This was disappointing with 15 Swallows, 5 House Martins, 9 Blackcaps, 35 Chiffchaffs, 2 Goldcrests and 8 Long-tailed Tits.  Little was seen on an afternoon walk by the Adur with Megan - the tide was only just dropping with a Curlew by the houseboats, 58 Turnstones roosting on boats by Norfolk Bridge and a brief view of a Kingfisher.

Thursday 9 October.  Drove to work and called in at the Adur on my way home.  The tide was still falling and few gulls were seen, only 15 Ringed Plover but 31 Dunlin.

Posted by richard fairbank at 22:29 No comments: