Introduction.  I was due to finish studying at Sussex University in late September 1979 and had obtained three months for birding before starting again in January 1980.  I decided to spend the first month on Scillies and the next two in Asia where Nepal was an obvious destination - it couldn’t be adequately covered in a more ‘normal’ 4 week trip as it was done mainly on foot, something that also appealed as I was not able to drive or afford a hire-car.  This would mean carrying my stuff a lot of the time, hiring porters was out too, so I had to be ruthless in what I took.  Fleming’s Birds of Nepal was essential, and light, otherwise I wouldn’t know what I was seeing, although it sometimes wasn’t quite up to the task.  My notebook almost ran out but writing in two columns for the last few days saw it through with a page left over.  I took a camera but not a telephoto lens, something I soon regretted.  Taking candles instead of a torch was also a bit dim, as I discovered the first time I had to go to the toilet at night – one of the disadvantages of being at altitude.  A warm coat was a must, although layers might have been more useful, while I got by with a single pair of sturdy shoes.  Good friends of mine Frank Lambert and Nigel Redman had been to Nepal the previous year as part of long overland trips and provided me with very helpful information.  None of my other friends had the time to join me so it was to be a solo trip.  With some trepidation I set off for Heathrow Airport on 4 November 1979 to catch an evening Ariana Afghan flight to Delhi via Kabul.  It was delayed by 24 hours and I was put up in an airport hotel, not a very encouraging start.
We left Heathrow on the evening of 5 November 1979 and I saw a number of fireworks as we took off.  After several stops we landed at Kabul Airport on the morning of 6 November.  I was keen to follow up a possible Bimaculated Lark seen from the runway as we were taxiing in but transit passengers were not allowed off the plane.  With 20 or so MiG fighters by the runway and a couple of tanks near the terminal building it probably wouldn’t have been sensible to wander around anyway.  I finally landed in Delhi late afternoon, 25 hours late, having missed my connection to Kathmandu.  The Royal Nepali Airlines Office was by now closed and the next flight tomorrow so I collected my bag and wandered out of the airport to go birding around nearby fields for the remaining hour or so of daylight.  Here I saw Large Grey Babbler, Indian Robin, Ashy-crowned Finch-Lark and 250 Ring-necked Parakeets, all new for me.  After dark I found what I thought was a quiet place to crash out.  It was superb under the stars but unfortunately I was also under the flight-path. 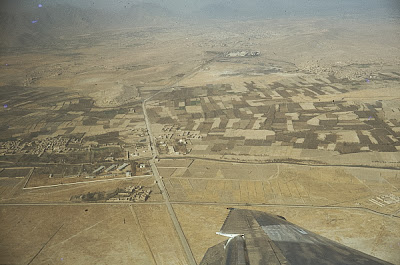 7 November 1979.  I stuck it under the flight-path until gone midnight but with no apparent letup in departures and arrivals I returned to the terminal and found a corner to sleep on my luggage.  It was somewhat quieter although I slept no more solidly for fear of waking to find my bag had gone.  No chance of oversleeping and early that morning I had no problem in getting on the first Kathmandu flight.  I hadn’t even collected my bag when I was being hassled by several touts for taxis or hotels.  I wasn’t ready for such and after changing a bit of money I decided to walk into town as it was only about 4 miles.  This enabled me to unwind a bit with a flock of 5 Grey-headed Lapwings in one of the fields on the way an unexpected bonus.  Once in Kathmandu I found the lodge I’d been recommended just off Freak Street although I was not impressed – it was quite a dive – but I hoped to get away the next day.  I then went to the Immigration Office to apply for a trekking permit and was told I could collect it that afternoon.  On the way back I saw a brilliant male Siberian Rubythroat by the Bagmati River.  I changed enough money for the trek, getting a 3” thick wodge of very low denomination notes at a better rate than at the airport.  I then booked a bus ticket to Pokhara for the next morning, collected my trekking permit and tried to find Jamaly’s restaurant but gave up as most of the population of Kathmandu seemed to be on the streets.  I returned to my dive and wondered what I’d let myself in for.

8 November 1979.  The bus to Pokhara took 7 hours and I noted seeing several interesting birds that I couldn’t identify and an Egyptian Vulture and two Crested Buntings that I could.  I found a lodge in Pokhara and spent the rest of the afternoon in fields to the east of the bazaar and across the river seeing a pair of Pied Stonechats, 3 Egyptian and 5 White-backed Vultures and several Olive-backed Pipits.
9 November 1979.  I left Pokhara at 06:00 as it was starting to get light and started walking slowly north out of town, past the Tibetan Camp and up the wide river valley.  The trail then climbed up to Naudanda, where I stopped for lunch, and followed a ridge to Chandrakot where I arrived at 17:30.  I’d walked just over 17 miles, climbing 2,500 feet, in 9 hours - not bad for my first day.  My nose was running like a tap but otherwise I was enjoying myself, helped on that front by 8 new birds although I only saw Red-billed Blue Magpie in flight and Long-billed Plover was a bit of a disappointment.  Birds of prey around Khare gave superb views flying low over the ridge, here at its highest point, with Lammergeyer, Black, Red-headed and Himalayan Griffon Vultures (the last two new), 9 Steppe Eagles and a male Pallid Harrier.  A male Rufous-bellied Niltava was superb while Grey-hooded Warbler and a flock of 30 White-throated Laughingthrushes were the pick of my other new birds.  I’m fed up with dal bhat already but Nabico Glucose biscuits and Star Bars make decent snacks.
10 November 1979.  With only two miles to walk today left Chandrakot as the sun was rising at 06:30 and descended through remnant forest to the Modi Khola at Birethanti, arriving mid morning.  I found a lodge, left my bag and spent the rest of the day wandering around by the river (River Chats, Plumbeous Redstarts and Blue Whistling Thrushes were common) and adjacent forest before returning as the light was going at 17:30.  A really nice day with lots of birds seen.  Highlights were 4 Lammergeyers, a flock of 20 Grey-headed Parakeets, a giant Crested Kingfisher, Barred Owlet, 2 Brown Dippers, 3 superb Little Forktails, Scaly Wren-Babbler, 2 Rusty-cheeked Scimitar Babblers, 30+ Pallas’s Leaf Warblers and a Chestnut-bellied Nuthatch while a tantalisingly brief view of what I was almost certain was a Long-billed Thrush was unfortunately one that got away. 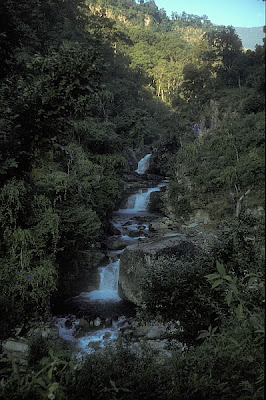 Posted by richard fairbank at 20:56 No comments: