Introduction. Looking for somewhere to take Nessa and Josh, who were now 15 and 11, had a bit of history for Megan and some new birds for me I persuaded the family to visit Texas at Easter. Easter was early but that was fine as Whooping Crane was my main target although it meant I’d be too early for falls of warblers but I had been to Point Peele previously and seen most of them there. Most lost photos now found, not that they are any good.

Saturday 26 March. We flew BA from Gatwick to Houston arriving at 14:20, cleared immigration, picked up our hire car and drove to our motel, the friendly Comfort Suites in The Woodlands, about 30km N of the airport. Few birds were seen on the way but included Red-shouldered Hawk and two adult and a juvenile Bald Eagle.

Sunday 27 March. After breakfast we drove to Jones State Forest and walked along a couple of trails for an hour or two. No one was about, despite it being Easter Sunday, and I saw four new birds – 2 Red-cockaded and 2 Red-bellied Woodpeckers, 4 Carolina Chickadees and 3 superb Brown-headed Nuthatches. Also seen were Loggerhead Shrike, 2 Blue Jays, 3 Eastern Bluebirds, American Robin, 3 Yellow-throated and 2 Pine Warblers and a Field Sparrow. We drove to Seabrook where we stayed in the rather snooty Comfort Inn on NASA Parkway and spent the afternoon on an interesting tour of the Lyndon B Johnson Space Centre. 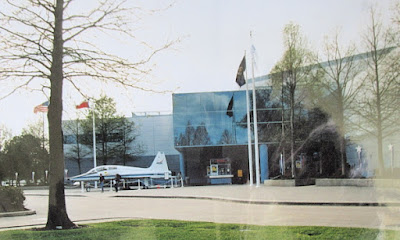 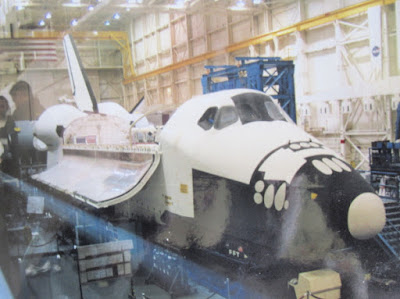 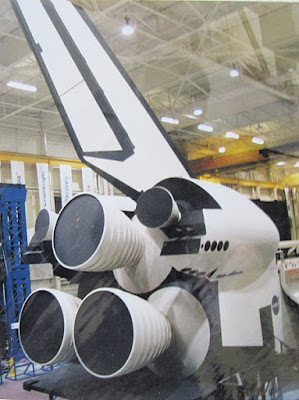 Monday 28 March. We drove to Galveston and caught the ferry to Port Bolivar. We drove NE along the coast, stopping to look out over Bolivar Flats. Commonest birds were 200 American White Pelicans, 1000 distant American Avocets and 500 Laughing Gulls, the first two were new as were 2 Marbled Godwits. I also saw 15 Roseate Spoonbills, a selection of herons and waders and 4 Northern Harriers, Common Yellowthroat and 12 Savannah Sparrows. It was very early in the season and there seemed to be no migrants in evidence reducing the temptation to go as far as High Island. We still had a 200 mile journey to make so it wouldn’t have bene practical anyway. Crossing back on the ferry what looked like a good candidate for a first-winter Thayer’s Gull was amongst 30+ American Herring Gulls. We had a quick look along the seafront at Galveston then headed first west then south, picking up Route 35. We stopped briefly near Palacios, where I saw a smart Marsh Wren by the road, and drove past Aransas National Wildlife Refuge (no obvious viewpoints) before arriving at the pleasant Best Western Ocean Villa in Port Aransas. Best birds seen on the journey were a male Vermillion and 8 Scissor-tailed Flycatchers and 4 Boat-tailed Grackles, the last two being new.
Tuesday 29 March. I visited the Port Aransas Birding Centre before breakfast. After we all went on the Wharfcat up the Intercoastal Waterway to Aransas National Wildlife Refuge and back. I was very happy seeing 26 Whooping Cranes (10 pairs, 6 with a single juvenile), more so as it was my last crane species. The rest of the family found the boat trip rather long and boring and were more impressed by the odd alligator along the bank and particularly 3 Bottle-nosed Dolphins which bow-rode for a while as we were returning. I saw 2 Reddish Egrets (new), 8 Great Northern Divers, 7 Black-necked Grebes, 8 Redheads, 400 American White and 100 Brown Pelicans, 3 White-tailed Hawks, 15 species of wader including 6 American Oystercatchers, 50 American Avocets, single Marbled Godwit and Long-billed Curlew (also new), 2500 Laughing Gulls and 40 Black Skinners. In the afternoon I visited Port Aransas Birding Centre again and Paradise Pond. Birds seen there included 8 species of duck including a male Cinnamon Teal and 3 Mottled Duck, 12 White-faced Ibis, a Sora, 7 Stilt Sandpipers, Grey Catbird, 4 Myrtle, 2 Black & White and an Orange-crowned Warbler, Louisiana Waterthrush, 2 Lark and 4 Swamp Sparrows. The 80 species seen today was to be my highest day total of the trip. 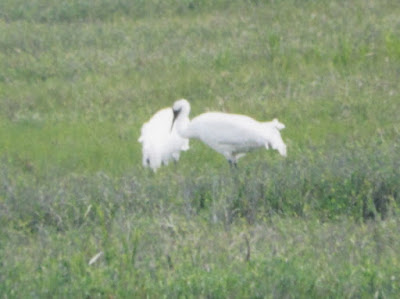 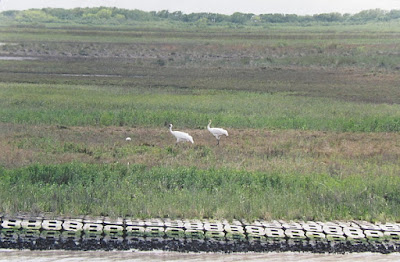 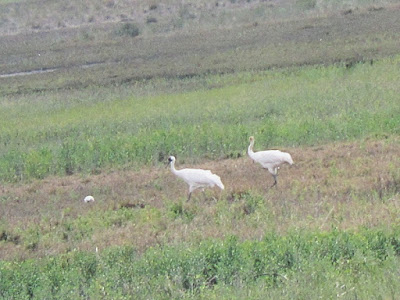 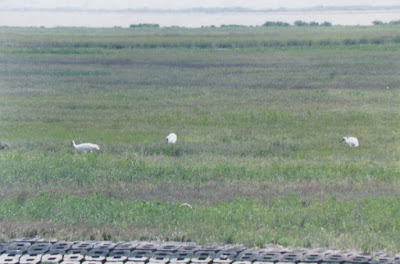 Wednesday 30 March. I birded around Port Aransas (Birding Centre and Paradise Pool) at the start and end of the day and in between we drove down Mustang Island and across to Corpus Christi. There we visited the Texas State Aquarium with its impressive views out to USS Lexington (the massive WW2 Aircraft Carrier and Naval Museum) and the almost birdless Botanical Gardens. Highlights of the day were 3 White-rumped Sandpipers, a Gull-billed Tern, 2 Ruby-throated Hummingbirds, my first (of many) Golden-fronted Woodpecker, Eastern Wood Pewee, 2 Ruby-crowned Kinglets, Orange-crowned, 2 Nashville, 3 Myrtle and 4 Black & White Warblers, 2 brilliant Louisiana Waterthrushes, 4 male Common Yellowthroats and 6 Song and 2 Lincoln’s Sparrows.
Thursday 31 March. I visited Port Aransas Birding Centre and Paradise Pool before breakfast seeing White-eyed Vireo, male Black-throated Green, 2 Black & White, Myrtle, 2 Nashvile and 2 Orange-crowned Warblers. We had a 300 mile drive west through dry country to the Mexican border ahead of us but roads were generally good and fairly quiet. We had a prolonged lunch stop at Choke Canyon where I saw 11 Wild Turkeys (and later another from the car), and a superb Greater Roadrunner with another giving an amazing bill rattle while remaining unseen. Other new birds seen during the day were a Ferruginous Hawk, Couch’s Kingbird, 3 Ash-throated Flycatchers, 15 Chihuahuan Ravens, Black-crested Titmouse, Verdin (much better than I was expecting), 4 Bewick’s Wrens, Long-billed Thrasher and a pair of Pyrrhuhuxia. Also seen were Anhinga, 10 Harris’s Hawks, Belted Kingfisher, 12 Golden-fronted Woodpeckers, 165 Scissor-tailed Flycatchers, 25 Loggerhead Shrikes, a pair of Eastern Bluebirds and an Olive and 6 Lark Sparrows. We arrived at the Comfort Inn in Del Rio, our base for the next three nights. It was a pleasant motel but its situation along the main road out of town wasn’t ideal. Most Texans rarely walk anywhere and there were no pavements or sidewalks making leaving on foot, for whatever reason, rather hazardous.

Friday 01 April. We drove west for 45 miles to Seminole Canyon State Historical Park. There we joined a tour of the pictographs (Rock Art) thought to be 4000 years old. The pictographs were impressive as was the desert setting making it my favourite of the places we visited. During our morning at Seminole, on the pictograph tour and walking half-way along the river trail, I saw 3 Swainson’s Hawks, 8 White-throated Swifts, 4 Black-chinned Hummingbirds, 3 Rock and 2 Canyon Wrens, Black-tailed Gnatcatcher, 2 Hooded Orioles, 3 Cassin’s and 2 Black-throated Sparrows and a Green-tailed Towee, all were new. We returned via Lake Amistad, having crossed the lake on an impressive bridge on the way. Further news birds were a superb Scaled Quail sat on a fencepost, Bell’s Vireo, 2 Cactus Wrens, Curve-billed Thrasher and 2 Canyon Towees. Other good birds were 3 Wild Turkeys running across the road ahead of us, 2 Couch’s Kingbirds and 2 Cedar Waxwings at our motel, 6 Audubon’s Warblers, 2 Buff-bellied Pipits and 2 White-crowned, 6 Chipping and 3 Clay-coloured Sparrows. 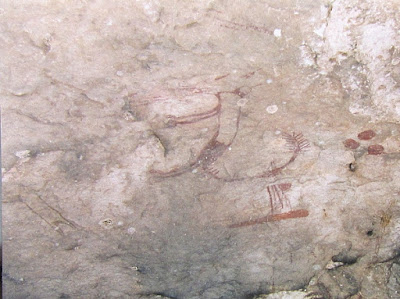 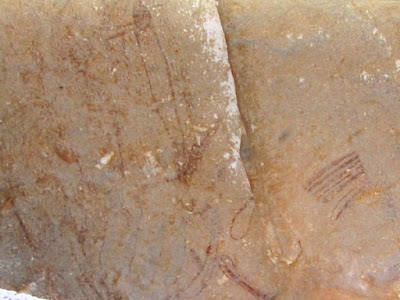 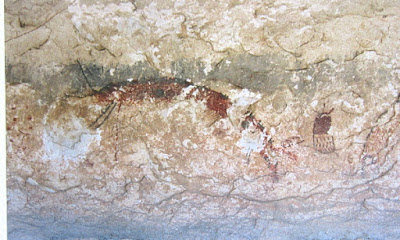 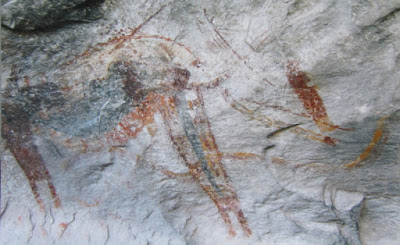 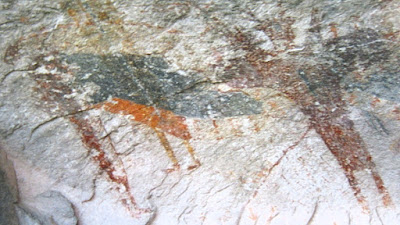 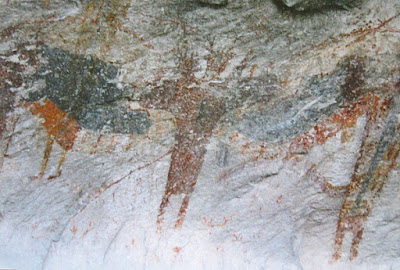 Saturday 02 April. Being on the border with Mexico we decided to visit Cuidad Acuna for the morning. We walked across the International Bridge seeing 2 American Wigeon and 2 Blue-winged Teal on the Rio Grande which was about 100m wide here. Crossing into Mexico was easy, we had to pass through a turnstile leaving USA and show our passports to enter. We spent a couple of hours walking around Cuidad Acuna looking in a few shops and seeing 15 Cedar Waxwings in the main square. Predictably crossing back wasn’t so straight forward, presumably few Europeans do so on foot. Eventually a border official saw us and let us in. A Red-shouldered Hawk heading our way had no such problem although I imagine many are shot. Texas had no shortage of taxidermists, or gun shops. After lunch I returned to Lake Amistad and Seminole and while Megan, Nessa and Josh walked to a Walmart superstore less than a mile away. They were probably the only customers arriving on foot that day/week/month/year? Birds at Seminole and Amistad were similar to yesterday but included three that were new – 7 Bobwhites, Say’s Phoebe and 3 Lark Buntings – all along the River Trail at Seminole which I walked to the end. Also seen were 4 Scaled Quail (Seminole), displaying Wild Turkey (at Amistad), 2 Carolina Wood Duck, another Swainson’s Hawk, Sora, 6 Killdeers, a Ring-billed Gull, Lesser Nighthawk (flushed at Amistad), Great Kiskadee, 6 Cactus Wrens, 3 House Finches, 2 male Myrtle and 3 male Audubon’s Warblers (and 5 undifferentiated females), 8 Lincoln’s, 20 White-crowned, Grasshopper, Field, 10 Vesper, 7 Cassin’s, 9 Black-throated and 6 Lark Sparrows, 3 Canyon Towees and 7 Pyrrhuloxia.
Sunday 03 April. We left Del Rio and drove to Lost Maples State Natural Area, about 120 miles to NE. We spent the morning walking a couple of woodland trails before continuing to La Quinta Market Square in San Antonio. The day produced 7 Yellow-crowned Night Herons (San Antonio), Swainson’s and 2 Harris’s Hawks, 3 Ladder-backed Woodpeckers (new), 2 Eastern and a Black Phoebe, 3 White-eyed and a Yellow-throated Vireo, 2 Western Scrub Jays (new), a male Bushtit (new), Carolina Wren, 3 Lesser Goldfinches and 3 Golden-cheeked Warbler. The warbler was also new and my main target at Lost Maples along with Black-capped Vireo which I was probably too early for. We joined many other tourists for a late afternoon on the San Antonio Riverwalk. 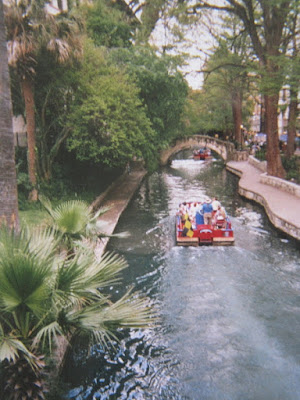 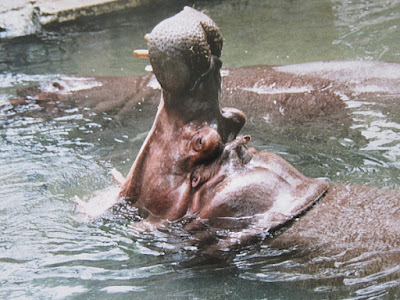 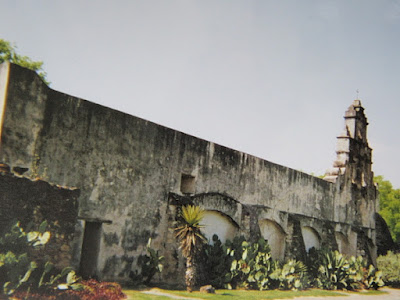 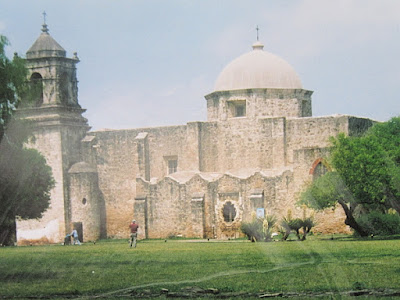 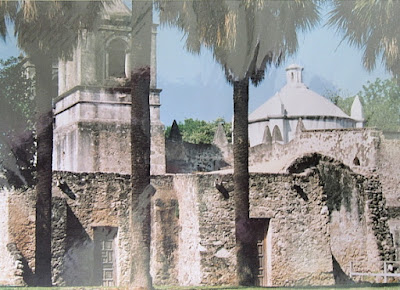 Wednesday 06 April. We left San Antonio and to Austin via Enchanted Rock State Natural Area and Pedernales Falls State Park, a distance of about 200 miles. We walked up onto the Enchanted Rock, steep in places, seeing Verdin, 2 Canyon Wrens, 2 Myrtle Warblers, 3 Rufous-crowned Sparrows (new), 4 Canyon Towees and some lovely views. At feeders at Pedernales Falls were 2 Pine Siskins (new), 2 American Goldfinches, 10 House Finches, 4 White-throated Sparrows and 2 Spotted Towees while 6 Black-throated Hummingbirds, Ladder-backed Woodpecker, 3 Bewick’s Wrens and another male Golden-cheeked Warbler were also seen in the park. We saw 2 Black-crested Titmice at both sites and 2 Red-tailed and a Cooper’s Hawk (new) somewhere along the way. In Austin we stayed in the Town Lake Holiday Inn with a view of the Lady Bird Lake section of the Colorado River. We walked to the nearby Congress Avenue Bridge to join the crowd waiting for see thousands of Mexican Free-tailed Bats which roosted under it. Seeing them leaving was very impressive. 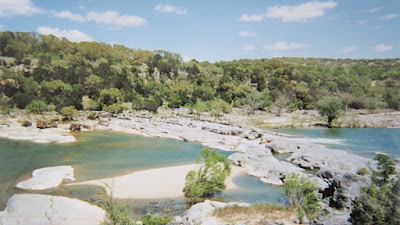 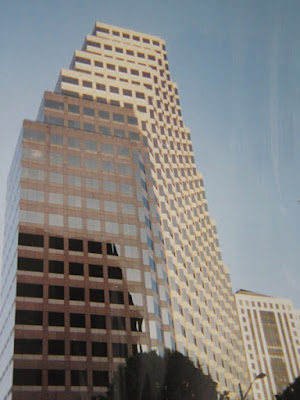 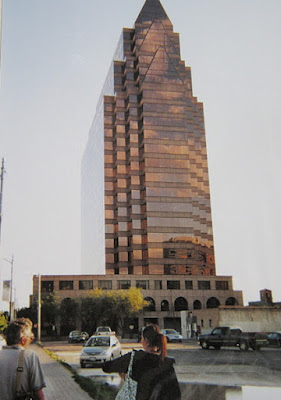 Friday 08 April. Our last day, we left Austin and drove 150 miles to Jones State Forest, we’d come full circle. This visit was similar but as successful as our first despite having longer there. We saw Green Heron, Sharp-shined Hawk, 3 Red-headed and a Red-bellied Woodpecker, Carolina Chickadee, 3 Tufted Titmice, 100 Cliff Swallows, Carolina Wren, 2 Eastern Bluebirds, American Robin and 2 Pine Warblers. We drove to Houston Airport, dropped of the car and caught our overnight flight back to Gatwick.

[blogged during lockdown in March 2020, more photos added]
Posted by richard fairbank at 17:31 No comments: