Thursday 31 December. An hour seawatching from Widewater from 08:00 produced on the sea an unidentified duck (possibly a Teal), 3 Great Crested Grebes, 3 Razorbills and 10 Red-throated Divers. In addition Oystercatcher, 3 Razorbills, 3 unidentified auks and 3 Red-throated Divers flew west with 12 Gannets offshore. Also seen at Widewater were a Brent Goose, the pair of Mute Swans and juvenile, 8 Little Grebes, 25 Ringed Plover and 8 Turnstones. Nothing was evident at Shoreham Fort, not even a Turnstone. A year I'm not sorry to see the back of as despite seeing some nice birds in Sussex and even finding a couple it was a case of what might have been with cancelled trips to India, Georgia, Brazil and Shetland. Maybe 2021 will be better, eventually. Happy New Year everyone.

Wednesday 30 December. Megan and I took Cookie to Lancing Ring from where we walked around Steepdown. I saw a covey of 10 Grey Partridges, a distant Red Kite, Buzzard, 31 Sky Larks, 5 Long-tailed Tits, Stonechat, 11 Linnets, 2 Goldfinches and 5 Corn and 3 Reed Buntings. 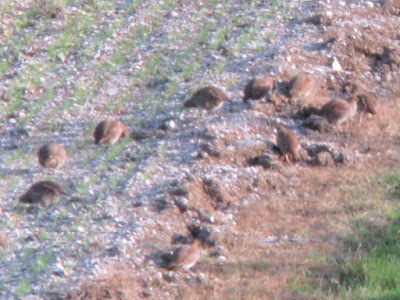 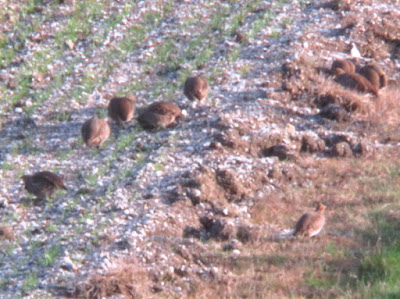 Monday 28 December. Megan, Nessa and I took Cookie to Rackham and the west side of Parham Park. Amberley Wildbooks was flooded with loads of ducks. Teal (1,000+) appeared the commonest then Wigeon (200+), Pintail (100+) and Shoveler (20). Maybe 20 White-fronted Geese were mixed in with the Canadas and Greylags but I hadn't taken a telescope and probably overlooked some. I later learned 33 had been seen. We also saw Great Spotted Woodpecker, Jay, Raven, 2 Coal Tits and 2 Mistle Thrushes.

Sunday 27 December. I seawatched from Widewater for an hour before walking along the beach to the Eastern Sands wader roost. A Great Skua flying east at moderate range was the highlight while a Kittiwake, 9 Common Gulls and 3 Gannets flew west. On the lagoon and beach were a male Red-breasted Merganser, 3 Little Grebes, 32 Ringed Plover, 18 Turnstones, 112 Dunlin and a Little Egret. Shoreham Fort was quiet but eventually produced a Purple Sandpiper with 10 Turnstones on/below the wooden pier. On the Adur at low tide I saw 19 Lapwings, a Grey Plover, 4 Redshank and 50+ Black-headed Gulls including one with a Dutch colour-ring before the light went.

Saturday 26 December. Megan, Nessa and I took Cookie up to Mill Hill where I saw a Kestrel and 2 Blackbirds.

Friday 25 December. Happy Christmas. Megan, Nessa, Josh and I walked around the Adur between the A259 and Old Toll Bridge with Cookie. I saw 13 Oystercatchers, 113 Lapwings, 4 Grey and a Ringed Plover, 38 Turnstones, 13 Redshank, 3 Little Egrets, a Kingfisher and 4 Meadow Pipits.

Posted by richard fairbank at 22:09 No comments:

Thursday 24 December. The day started badly with my camera slipping off a chair in the dark and the telephoto lens mount breaking as it landed on the carpet 18 inches below. I thought it really bad luck but discover it is not unknown for Panasonic zooms to do this when attached to the camera body as mine was, perhaps too much strength in the metal was sacrificed to reduce weight? At least it should be repairable. I drove the the Black Rabbit at Arundel and saw 2 vocal Tawny Owls quite well and a fly-over Woodcock badly before/at first light. One then two superb Barn Owls appeared soon after and gave excellent views. Next stop Burpham Sewage Works where a male Marsh Harrier and a Red Kite flew over Burpham SF while I looking at the Chiffchaffs - colybitta 4 tristis 0. My South Downs Farmland Bird survey was rather quiet, the cold northerly wind wasn't ideal but it was dry and with Sussex imminently going into tier 4 it might be my only chance to do it. Seven Grey Partridges, 61 Fieldfares and 17 Redwings were the highlights but the only Red Kite seen was back at the car after I had finished - the first blank I can remember during a survey there. Another visit to Burpham SF produced presumably the same four Common Chiffchaffs. I then drove to Fairmile Bottom and hiked up to Sherwood Rough where I saw 8 Hawfinches and 9 Greenfinches. The former were good, if a bit distant, and appeared to fly into a roost tree at 14:05. I left soon after and drove to Arundel WWT for a look around prior to dusk but was thwarted as I arrived to find it had closed an hour earlier. I'd booked my entry the previous evening and the confirmatory email failed to mention this. Happy Christmas everyone.

Wednesday 23 December. I took Cookie to Cuckoos Corner and we walked up the Adur to Dacre Gardens and back. It was very muddy but we missed the heaviest showers. We saw 6 Redshank, 100+ Common Gulls, 7 Grey Herons, single Buzzard, Kingfisher and Redwing, 3 pairs of Stonechats, a heard only Grey and 24 Pied Wagtails and 29 Meadow Pipits. 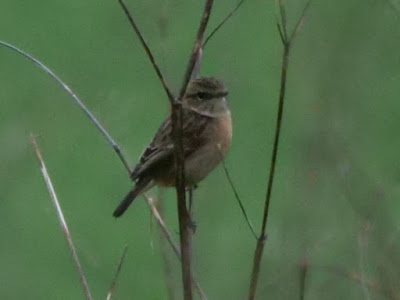 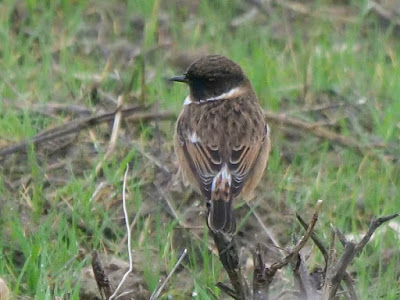 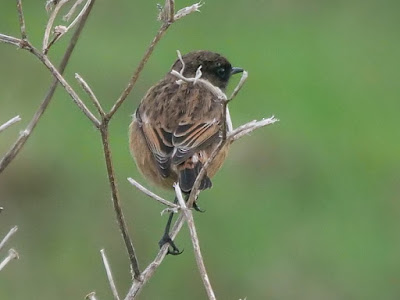 Tuesday 22 December. I went to Widewater and seawatched from 08:05-08:50 seeing just a single Common Scoter and 9 unidentified geese flying east. Another Common Scoter was off-shore and a few Turnstones on the beach. The pair of Mute Swans and their youngster were on the lagoon along with a male Red-breasted Merganser, 5 Little Grebes and 2 Kingfishers. There were 45 Ringed Plover and 196 Dunlins roosting on the beach at Eastern Sands, a bit of a surprise as the tide was quite low. Walking back along the beach small groups of feeding Turnstone took the days total to 31. Shoreham Fort was birdless as was Harbour Way. I then spent a couple of hours on the Adur, between the railway and Cuckoos Corner. I saw 62 Lapwings, 3 Grey Plover, 11 Redshank, 300+ Common Gulls (3 had metal rings but disappointingly none wore colour rings), an adult Mediterranean Gull, 500 Herring Gulls (including 2 seen on the Adur previously with North Thames colour-rings) and another Kingfisher. 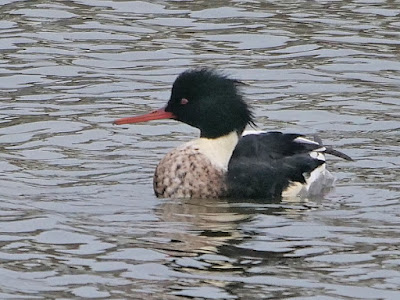 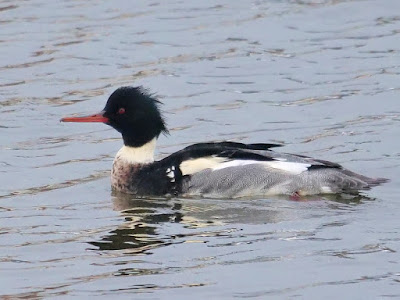 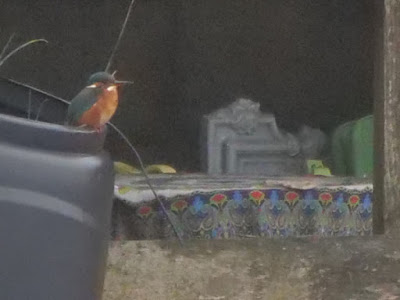 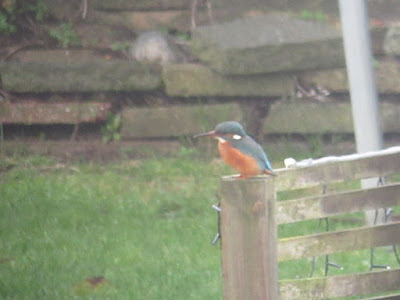 Monday 21 December. I took Cookie to the Adur and in the rain we walked up to Cuckoos Corner. There were few gulls in evidence, a combination of a bait digger and a not very low tide not helping. We saw 9 Dunlin and 7 Redshank and spent the rest of the day drying out.

Sunday 20 December. Megan and I took Cookie to Brooklands where we saw 7 Teal, a first-winter Yellow-legged Gull, Great Spotted and Green Woodpeckers and a Goldcrest.

Saturday 19 December. I took Cookie to the Adur for low tide and we walked up to Cuckoos Corner looking at gulls. I saw 250 Black-headed, 2 Mediterranean, 400 Common, 20 Great Black-backed, 400 Herring and a few Lesser Black-backed Gulls and a single Grey Plover. They included Norwegian and probably German colour-ringed Great Black-backs and a North Thames Herring. During an afternoon trip into town I took Cookie to Town Quay where we saw a Curlew while Megan was in a shop.

Posted by richard fairbank at 22:24 No comments: 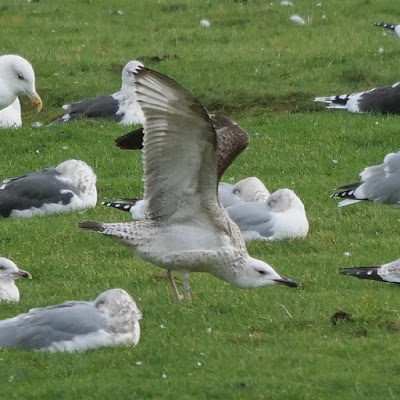 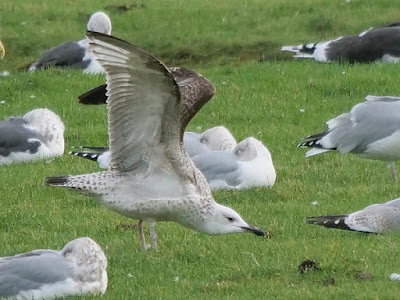 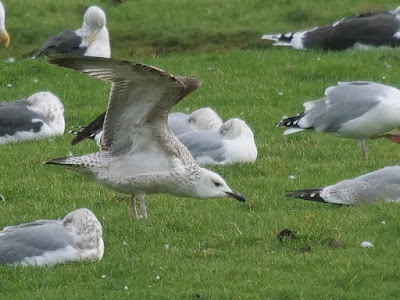 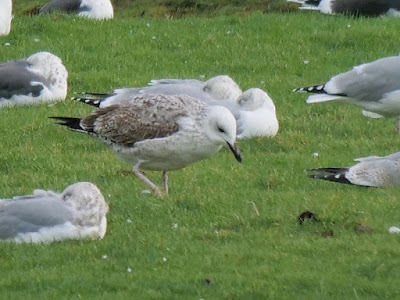 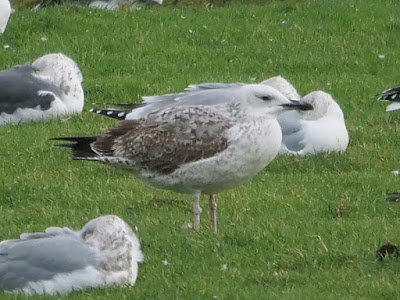 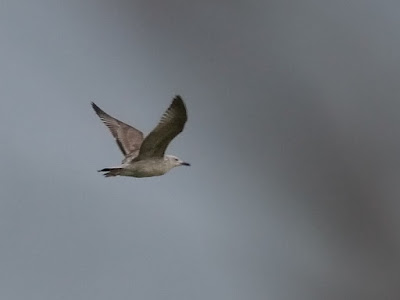 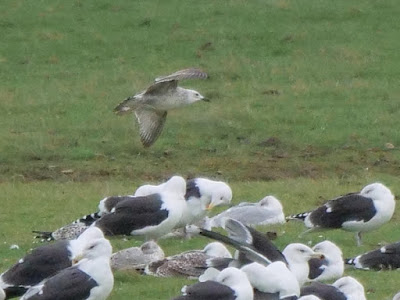 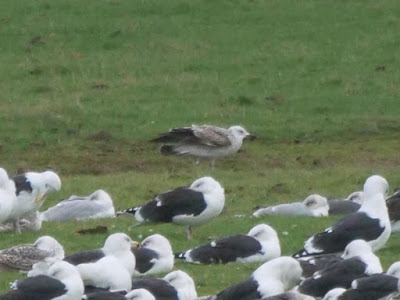 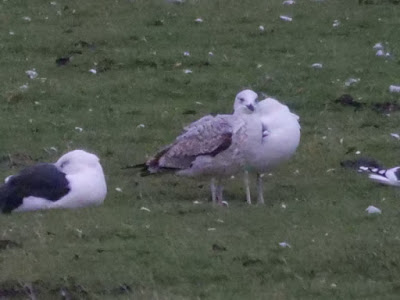 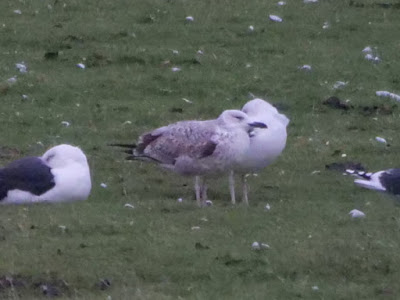 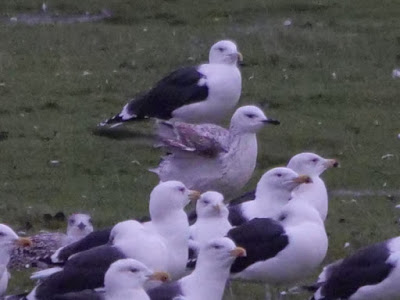 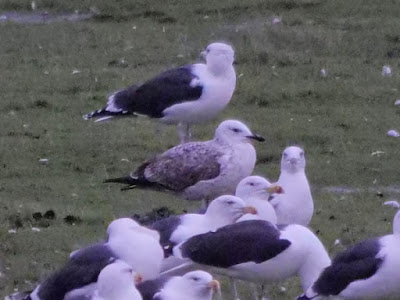 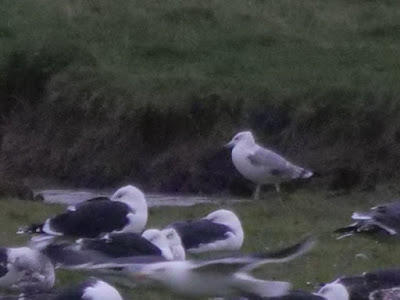 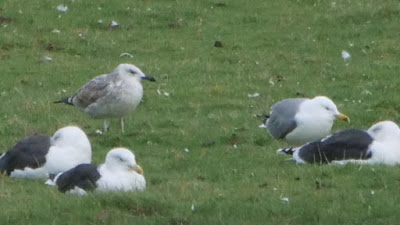 Posted by richard fairbank at 23:10 No comments: