Introduction & arrival.  I visited Ecuador with Michael Grunwell for three weeks in August and September 1999.  Michael visited the Galapagos for 4 days during the first week, an option my finances didn’t allow.  I had visited Ecuador in 1986 and both Michael & I had been to Peru in 1984 but neither of us had visited the Neotropics for nearly 10 years.  We were therefore somewhat rusty on bird ID and had forgotten how frustrating most views of hummingbirds were!  This blog is based on a report I wrote at the time, further unreliable memories and some scanned prints taken with an instamatic.

Michael & I arrived in Quito at 10 pm on the evening of 19 August.  Nowhere at the airport would change pounds sterling which could have been a slight problem.  We stayed in the Hotel Aeropuerto conveniently located immediately outside the airport entrance, although the location was the only good thing about this place.  We picked up a pre-booked car from Budget the next morning and set off for Bellavista, arriving just over two hours later.

Bellavista (20-21 August).  An interestingly constructed but very basic timber lodge located rather precariously on a ridge-top, surrounded by good forest, although many of the trails were quite steep.  It seemed expensive to stay at, considering the lack of facilities, although the staff were friendly and the hummingbird feeders on the porch superb.  We joined up with Tom Love who had arrived at Bellavista shortly before us and enjoyed his company for the next three days.  An afternoon was spent on the porch at Loma Linda, 2-3 kms below Bellavista, talking to bird guide Tony Nunnery and admiring the view from his porch and the hummers at his feeders.

Mindo & Los Bancos Road (22 August).  We left Bellavista in the dark, driving down to a Lyre-tailed Nightjar site just beyond Tandayapa for dawn.  Here we saw a pair and nearby another male on the road.  We then drove on to Mindo concentrating on the track to the big hotel being built a few kms below the obelisk on the right.  Birding was good here and we reluctantly left late morning for the gazebo track near km 73 on the Los Bancos road.  The track was rough in places and we drove little more than a km down it, to the first forest patch on the right, and probably walked a further 2 kms along it.  Despite being in the middle of the day a couple of hours walking along the track between the small forest patches proved to be excellent.  We then returned to Mindo for a late lunch, by which time it was quite hot in the valley, briefly looked at the hotel track again and called in at Mindo Lindo but nobody was home.  We returned to Loma Linda along the old Mindo road, stopping on occasion and encountering one particularly large bird flock.  Michael and Tom left at dusk, returning to Quito with the car.

Loma Linda & Tandayapa (23-25 August).  I had originally planned to stay in Mindo while Michael was on the Galapagos but I was not overly keen on it as I would have no transport and most of the good birding sites were a fair walk from the town.  As an alternative Tony Nunnery kindly allowed me to stay on his floor at Loma Linda, a house he had recently built himself and was in the process of equipping.  This offered good birding, literally from the porch, excellent company and a breathtaking view - its name translated as Pretty Hill which seemed very appropriate.  On the first morning Tony & I climbed down a rather steep track Tony was cutting to the Tandayapa River, returning to spend the afternoon around his house and a couple of trails behind it.  A female Purple-throated Woodstar with 2 young at her nest were a particular delight, being visible from the porch.  The next day I followed a well-established trail down to the Tandayapa River and up to a clearing on an adjacent hillside.  Back at Loma Linda the young Purple-throated Woodstars had left the nest although they remained in a tree near it for the rest of my stay.  On the final morning I walked down to Tandayapa to meet Iain Campbell.  Iain was completing the building of an impressive new tourist lodge at Tandayapa and, through Tony, had offered to give me a lift back to Quito.  I spent the afternoon walking the trails at Tandayapa with Iain and was very impressed that he and some friends had put substantial savings into the project which if successful would provide a long term investment for them (a sort of pension) as well as protecting a decent area of forest.  I was less impressed when back at the lodge it became apparent that the lift he’d lined up wasn’t going to materialise.  We and his Ecuadorian girlfriend got a lift to the main road and started hitching back into Quito.  We got picked up by a pickup and hunkered down in the back to try and get out of a cold wind.  It then got dark and started raining!  I was very pleased when we were dropped off on the outskirts of Quito and found a taxi to take us to Iain’s apartment where they kindly put me up for the night. 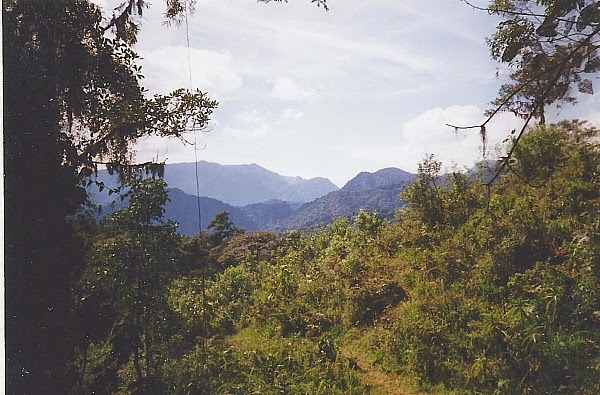 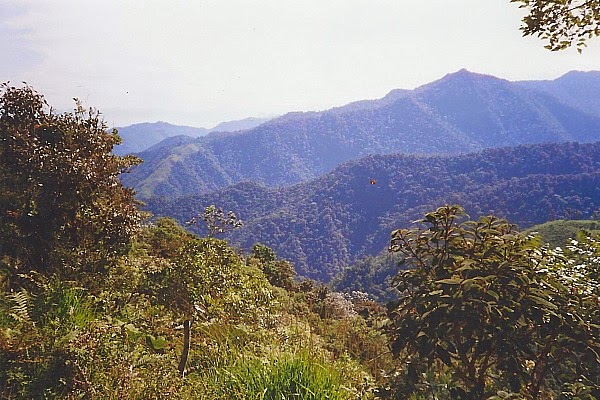 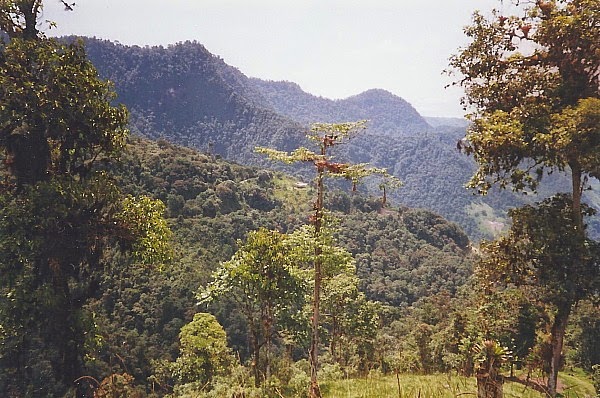 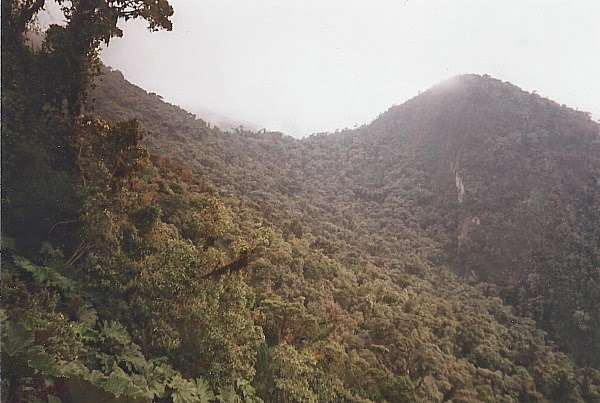 Yanacocha (26 August).  Yanacocha was an area I’d tried to visit on my earlier trip to Ecuador but hadn’t managed to find the right place.  Once back in Quito Iain had arranged for a taxi driver to take us to Yanacocha for a few hours on the morning of 26 August.  As the taxi driver had been there before I was relatively confident of us not getting lost and it was actually fairly straightforward when one knew the way (I’d gone too high previously).  Birdquest, led by Paul Coopmans, were already in the field when we arrived, their breakfast table looking rather incongruous on a mountainside in the middle of nowhere although I was a little envious of it!  After unsuccessfully chasing after a couple of species they had seen we went our own way and after about an hour Iain found an Ocellated Tapaculo in tangled bamboo just below the track.  I eventually got a stunningly good, but brief, view of it after scrambling down the rather steep slope.  Iain and I returned to Quito and after visiting a bank (to change my pounds) I then met up with Michael, back from the Galapagos, at the not-to-be recommended Hotel Aeropuerto.  Michael had left a bag in store there while he went to the Galapagos but those on the desk denied all knowledge of it.  After much argument and us threatening to call the tourist police they finally found it and returned Michael's bag with extreme bad grace.