24 February 2013.  An hour seawatch from Shoreham Harbour produced lots of auks moving west on the horizon with the 40 closest all Razorbills as were the dozen identified on the sea.  Not much else was moving -  2 distant divers, Fulmar, 5 Gannets, 6 Common Scoter and 2 Kittiwakes.  A Rock Pipit was on the West Arm, 7 Purple Sandpipers on the wooden jetty as the tide came in and a Sanderling and North Thames Herring Gull RY07 (not one I'd recorded before) was near the Yacht Club.  Just 12 Common Scoter were seen off Widewater, and more distant auks.

Megan and I then visited Arundel WWT, somewhere that offered some shelter from the biting wind.  We saw some tits on the feeder (including 5 Long-tailed and 2 Coal)plus  my usual favourites in the collection, the Eider, Long-tailed Duck and a drake Garganey being particularly vocal.  It shouldn't be too long before the latter appears on passage in Sussex, the drakes invariably arriving before (or with) females.  Returning to the main building I noticed a recent sightings board which mentioned 2 Bean Geese and 19 Grey Lags from the Ramsar Hide.  I'd seen just 6 Grey Lags on the scrape so decided to walk back just in case they were tucked away out of sight.  They weren't but fortuitously a light aircraft chose that moment to fly over, flushing a flock of about 50 Grey Lags from the other side of the river.  As they came over I spotted the 2 Bean Geese loosely with them.  They circled the WWT a couple of times before breaking off and dropping back down over the river.  We didn't have time to investigate further.

An evening low-tide visit to the Adur was unproductive despite about 400 Herring Gulls being present.  Dave Cooper and Brenda Kay had called in there too but we were unable to find anything of note before a bait digger arrived and flushed most of the gulls off.

Posted by richard fairbank at 19:31 2 comments:

22 February 2013.  A Peregrine seen on Southwick Power Station chimney on the way to work.  Lights no longer needed for the journey.

Posted by richard fairbank at 20:00 No comments:

17 February.  The spring like conditions were unfortunately not reflected in the passage noted during an hour seawatch from the end of Shoreham Harbour from 07:50-08:50.  19 Brent Geese, 12 Teal and 2 Shelduck flew E along with single diver, Fulmar, Gannet,  Oystercatcher and Kittiwake.  More was probably moving but too far out for me to detect.  2 Red-throated Divers and 4 Razorbills were on the sea and a Peregrine on Southwick Power Station chimney.  2 Grey Plovers on the Adur were somewhat disappointing fare for a low tide visit.
A morning walk the South Downs Way with Megan, down Anchor Bottom and along the upper Adur produced two Ravens, 5 Yellowhammers and a Corn Buntings but no sign of any Common Sandpipers.

After lunch I had a walk around Coates Common seeing and hearing 4 Wood Lark, perhaps my favourite song.  Two Egyptian Geese were at Sopham Bridge with 80 Fieldfares nearby.  A walk to the chestnuts at Burton Mill Pond was very quiet although 35 Fieldfares and 10 Redwings in a field there were nice.  4 Mandarin flew over at dusk and just before 6pm a Bittern was seen perched halfway up the reeds along the far NE corner.  Close to my worst ever view, sadly.


Posted by richard fairbank at 22:58 No comments:

Saturday 16 February.  Another enjoyable day out with John King.  We started at Goring Gap at about 07:50 and had just walked to the western end of the beach when the Snow Bunting flew in calling from the NW and landed on the beach in front of us.  It gave excellent views between being flushed by occasional joggers and walkers although the light wasn't brilliant for photography. 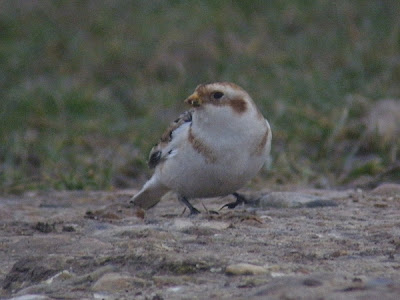 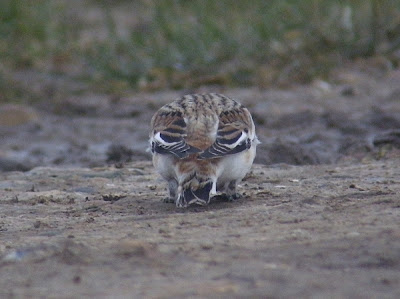 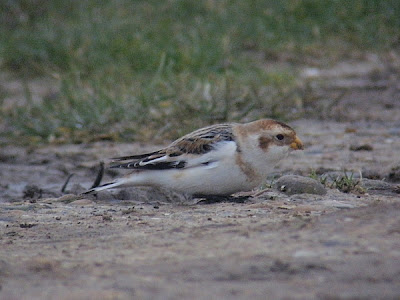 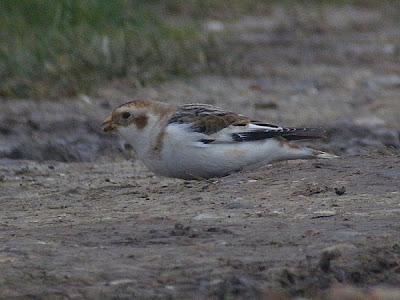 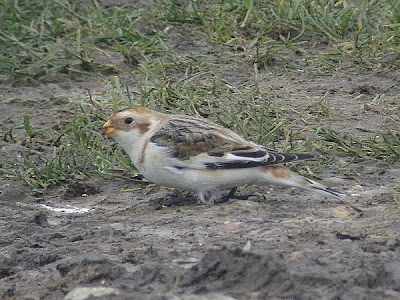 We headed west to try and track down the Whooper Swans that had been seen during the week at Lidsey although the news that they had not been found the previous day was somewhat disheartening.  We tried Barnham Court, Lidsey Sewage Works & Lodge and Honer Lane but the best we could come up with were 3 Chiffchaffs and a Grey Wagtail at the Sewage Works.  With the tide about half-way in Fishbourne seemed a reasonable bet but although we found the Black Brant quite quickly waders proved more difficult with just John seeing Greenshank and our only adding the wintering Whimbrel as we were leaving.  Another Grey Wagtail and 2 Rock Pipits were the best of the rest.
With the tide pretty much in we headed for Thorney Deeps.  This proved successful with a walk along to the western security gate at the Great Deep producing 2 Spotted Redshank, 9 Greenshank, Kingfisher, 2 Cetti's Warblers singing and chasing each other and a Water Rail (with at least 3 more heard).

Sunday 10 February.  Two hours on my usual Shoreham circuit produced 11 Purple Sandpipers roosting at high tide on the inner eastern arm of Shoreham Harbour with a Rock Pipit nearby, 5 Red-breasted Mergansers (1 male) on Widewater and a Red-throated Diver on the sea.  as it was high tide I thought I'd skip the Adur by the airfield and try the saltings but the Adur Rec car-park was full and it was raining so I went home.

Posted by richard fairbank at 20:20 No comments:

Saturday 9 Februuary.  An enjoyable day in West Sussex with John King.  We started at Salvington Road where the Waxwing flock were showing well, albeit in poor light.  We watched them for an hour but the light hardly improved during that time although it was lovely to see and hear them.  We went on to Selsey where the calm dull weather and high tide made ideal viewing conditions on a flat sea.  In an hour we saw 3 Great Northern  Divers, 25+ Red-breasted Mergansers and 6+ Razorbills on the sea while 42 Red-throated Divers flew west and two Mediterranean Gulls were loafing along the beach.  Conditions off Church Norton were similar and we joined Andrew House to watch another close Great Northern Diver and at least 9 Slavonian Grebes.  Andrew gave us some helpful info on a couple of things that were around. Three Bearded Tits gave excellent telescope views in the reeds at the SE end of the Long Pool and 3 Avocets were seen in the harbour. On the way back  we drew a blank with Whooper Swans off Homer Lane but otherwise it was a very successful day.

Posted by richard fairbank at 20:45 No comments:

In correcting a date and adding a reference to Sunday's post of this title I managed, in two stages, to delete the whole posting.  I hit the back arrow on the web-browser before/rather than the undo button on blogger.  Very annoying but here is a recreated version, I'm not sure it is as polished as the original, although I'm probably remembering it to be better than it was.  Suggestions the post was removed for legal reasons are entirely misguided!

03 February 2013.  I spent two hours checking my usual areas around Shoreham without seeing a great deal.  A Peregrine on Southwick Power Station chimney from Shoreham Fort, 40 Common Scoter and a Red-throated Diver off Widewater where a North Thames colour-ringed Herring Gull was on the beach and just 3 Grey Plovers and very few gulls on the Adur despite a low tide.  Megan and I then went up to Devils Dyke and walked along to Truleigh Hill and back.  Visibility was very good when we started but the strong cold westerly wind soon blew in low cloud and we’d only just returned to the car when it started drizzling.  While out I’d received texts from John King to say that the Bonaparte’s Gull was back in Eastbourne and Paul James about 11 Waxwings by the Old Shoreham Road in Portslade that we’d earlier driven past (many thanks to both).  A slow drive past Benfield Way produced identifiable views of 5 or 6 Waxwings and after dropping Megan at home I returned for better views, seeing all 11.  I watched them for five minutes before dragging myself away to drive to Eastbourne.  At Prince’s Park the Bonaparte’s Gull was still present and being watched although it took me a couple of scans of the lake to pick it out, the size difference not always being that evident.  A very good find by David Cooper, more so at a site where few would consider looking.  Although few of the differences from Black-headed Gull were great, when added together they made a very much nicer, more endearing bird that I very much enjoyed watching.  Superb.  I then headed for Southease bridge to look for the dark-breasted Barn Owl but arrived about half an hour earlier than I need have (should have spent longer with the gull).  Despite a strong wind and drizzle the dark-breasted Barn Owl appeared from the west, crossed the river and gave excellent views as it did a couple of circuits around the fields between the river and railway line before heading away south.  A distinctive bird although one that probably falls within the intergrade boundaries.  A ‘normal’ Barn Owl was also present taking my years total to a record (for me) 11 and it is only just February!  A very enjoyable afternoon that nicely complemented the previous day’s trip to Scotney and Dungeness. 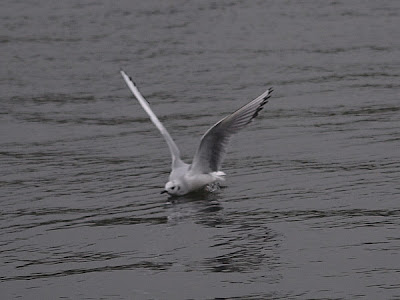 Posted by richard fairbank at 20:10 No comments: