Friday 31 December. Not having seen a Black-necked Grebe for two years I'd had it in mind to try Hayling Oysterbeds after Christmas but weather forecasts were always better the day after next and I kept putting it off. Until, that was, today. My mistake was believing the improved forecast for Shoreham would also apply to Hayling. It didn't and I arrived at dawn to find winds gusting 20mph and driving rain. It did improved but not by much. I saw 5 Goldeneye (including 2 superb males), 30 Red-breasted Mergansers and eventually 2 Slavonian Grebes disappearing into troughs which initially raised my hopes before giving decent views. Several hundred Oystercatchers and Grey Plover and 1-2000 Dunlin were roosting at high tide but visibility wasn't improving even if the rain had become annoying drizzle and I left. A brief stop at Dell Quay produced 14 Red-breasted Mergansers but no Goldeneye or any waders. I continued on to Pagham parking at the end of Church Lane. I walked down to the lagoon (a female and 2 immature Goldeneye and 3 Tufted Duck) and the harbour entrance (6 Mediterranean Gulls). As I returned around the east side of the harbour waders were flying in to frantically feed on the mud exposed by the receding tide. I counted 129 Golden and 200 Grey Plover, 15 Bar-tailed and 290 Black-tailed Godwits, 300 Knot and 1000 Dunlin. Back on the North Wall there were 17 Tufted Duck on the Breach Pool but little else. I attempted to head for Marsh Farm but turned back on the direct route with a Wellington full of water in a deeper than expected flood before reaching Halsey's Farm. The footpath along the side of Owl Copse was higher but again flood water prevented me reaching Marsh Farm from the south. Looking across from the east there were Cattle Egrets in two fields. The rear field was partly obscured but fortunately those in it joined those in the nearer field - in total there were 48 Cattle (a record for me) and 2 Little Egrets present. A long and tiring day, tinged with disappointment but I'd seen some nice birds. Probably a fitting end to 2021. HAPPY NEW YEAR everyone, let's hope 2022 sees a return to something approaching normality.

Thursday 30 December. Visibility was very poor when I arrived at Widewater at 08:05 and hadn't improved half an hour later by which time I'd seen single Great Crested Grebe, Turnstone and Gannet. A walk to Eastern Sands produced 30+ Ringed Plover and 140+ Dunlin roosting on the beach before I headed back and joined Megan, Nessa and Cookie on Mill Hill. An hour on our usual circuit in no better weather was virtually birdless with Buzzard seen and Chiffchaff heard. Leaving Mill Hill Megan punctured her rear left tyre and parked beside the road at the bottom of the hill. I drove her, Nessa and Cookie home then returned to change the wheel. Not quite the 2 seconds the Red Bull pit crew were regularly managing but a fairly credible 20 minutes to put on the space saver. I drove home and then took Megan back to her car, seeing the Lord Derby's Parakeet on a television aerial in Park Avenue on the way. Me returning home for the third time, Megan to go to Kwik-fit as our usual garage was closed. Later I took Nessa to the station and went on to the Adur with Cookie. Gulls were disappointing with only 23 Great Black-backs and 350 Herrings (including my 18th sighting in 11 years of Southwick ringed A6XY) although I did see my first Mediterranean Gull there since the start of the month. Also 123 Lapwings, Grey Plover and 14 Redshank.

Wednesday 29 December. A miserable day with heavy drizzle most times I ventured out with Cookie, I would have probably have stayed in otherwise. I saw the Lord Derby's Parakeet in its usual tree in Middle Road, a Jay and 20 Goldfinches in Buckingham Park and with Megan the Long-tailed Duck along Southwick Canal.

Tuesday 28 December. I visited Widewater with Cookie, arriving just after Matt Palmer at 08:45. There was just enough happening to keep my interest and in a couple of hours I saw 3 Great Crested Grebes, 4+ Kittiwakes, 45 auks (including a Guillemot and 4 Razorbills on the sea), 40 unidentified auks, 3 unidentified and 8 Red-throated Divers and 30 Gannets. A Grey Plover was on the Adur with 25 Great Black-backed and 400 Herring Gulls (including A6XY). Later a Sparrowhawk flew over our garden and the Lord Derby's Parakeet was in its usual tree in Middle Road. I finished the day on Beeding Brooks looking for Water Rail for my local year list (I heard one distantly). I also failed to pick out the Cattle Egret when seven egrets flew south to roost from the field it had been feeding in (I was on the wrong side of the river to see much of the field), only heard a Raven which appeared to fly over my head and failed to hear any Tawny Owls.

Monday 27 December. I took Cookie to Widewater where where we joined Matt Palmer and seawatched in the rain for an hour. I saw 8 Brent Geese, Great Crested Grebe, 4 Kittiwakes, 9 Razorbills, 10 unidentified auks, 7 Red-throated Divers, a Fulmar and 20+ Gannets. Low tide on an equally wet Adur on the way home produced Grey Plover, 2 Dunlin and 69 Great Black-backed and 150 Herring Gulls (including 2 adult 'argentatus'). In the afternoon Megan and I took Cookie around the block and saw just the Lord Derby's Parakeet again. 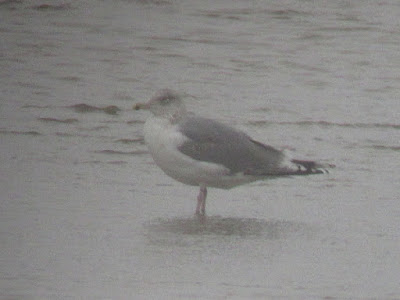 Sunday 26 December. I took Cookie to Widewater where I seawatched for two hours. I saw 10 Shelduck, 3 Great Crested Grebes, a Dunlin, 3 Kittiwakes, an adult Mediterranean Gull, a Guillemot, 70 Razorbills and 150 unidentified auks, 19 Red-throated Divers and 38 Gannets. Low tide on the Adur on the way home produced 6 Oystercatchers, Avocet, 126 Lapwings, Grey Plover, 14 Redshank, 31 Great Black-backed and 300 Herring Gulls (including 2 adult 'argentatus') and a Grey Wagtail. In the afternoon Megan and I took Cookie around the block and saw just the Lord Derby's Parakeet again. 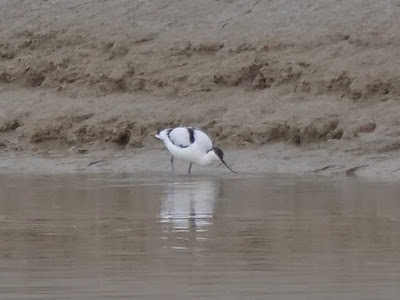 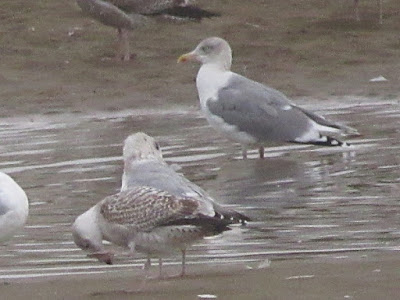 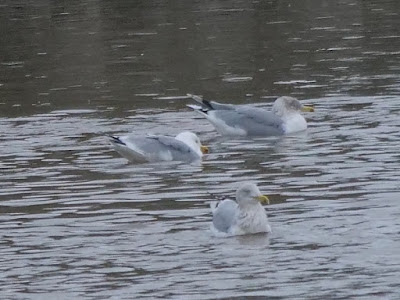 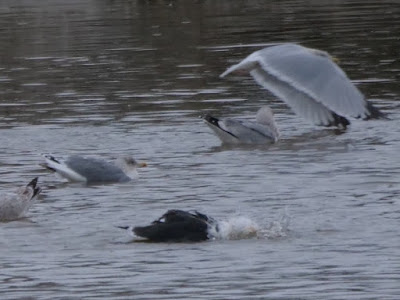 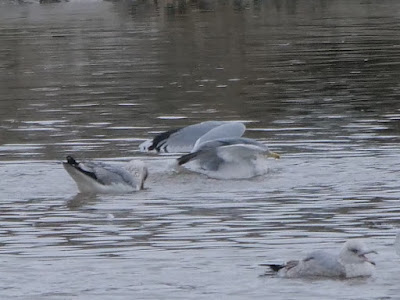 Saturday 25 December. Megan, Nessa, Josh and Cookie jpoined me at  the Adur and we walked down to and across the Norfolk Bridge and around the houseboats. I saw 10 Teal, 40 Lapwings, Grey Plover, 12 Redshank, 33 Great and 7 Lesser Black-backed Gulls, Kingfisher, 6 Long-tailed Tits, a male Stonechat and Grey Wagtail (heard). In the afternoon I took Cookie around the block and saw the Lord Derby's Parakeet again, but not the Ring-necked Parakeet that had been with it on the previous three days. 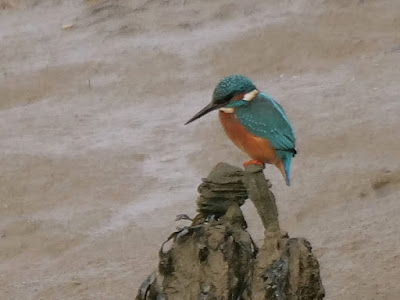 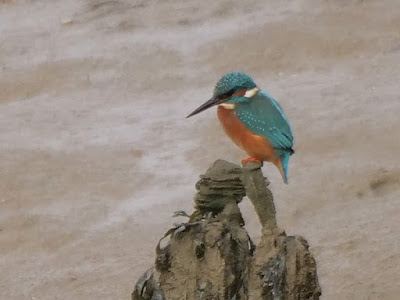 Posted by richard fairbank at 19:28 No comments:

The following lists and gives links to the relevant blogs of all the foreign birding and some family trips that I have been fortunate enough to have done. It is ordered by year with the most recent first. Blogs of the older trips use scanned slides, some having degraded badly with age, or digitised prints of varying quality. Some use photos taken by those I was with. These are usually easy to tell as they are significantly better than mine (and in most cases acknowledged). Many of the older blogs are based on my unreliable memories as my notes were very lacking in detail, other than the birds seen, something I now greatly regret. The blogs were initially done to find a 'home' for boxes of old slides which I had not looked at for years, my dad giving me his slide scanner providing the necessary impetus to digitise them. Doing these blogs has brought back many very happy memories, and a few sad ones. I’ve been very fortunate in having various like-minded friends whom I have been able to travel with. Sadly an increasing number are no longer with us. The Covid-19 Lockdown has given me the opportunity to fill in all remaining gaps so, until I can travel abroad again, all my trips are included below.

Posted by richard fairbank at 08:40 No comments: