Friday 30 April. I seawatched from Splash Point, Seaford from 06:00-09:00 in a light NE wind. Flying east were 15 Brent Geese, 9 Shelduck, 97 Common Scoter, 2 Great Crested Grebes, 4 Whimbrel, a superbly red Bar-tailed Godwit, 8 Little and a Mediterranean Gull, 46 Sandwich Terns, a Great and 2 dark morph Arctic Skuas, a few distant auks and 46 Gannets. A Sanderling, 2 (a pair of?) distant Little Ringed Plovers, 2 separate Hobbys, a Swallow and a Yellow Wagtail came in although the latter was only heard. With no other terns seen the draw of the Rottingdean Hoopoe proved too much of a temptation and I left, perhaps earlier than I normally would. The Hoopoe was on view in the sheep field along  Bazehill Road when I arrived and I spent a pleasant hour watching it and catching up with old friends. Meanwhile the wind slipped around towards the SE, how I hate it when it does that in the middle of the day. The seawatch improved although I didn't return, I've missed worse this week. 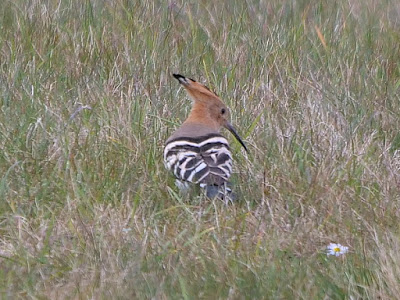 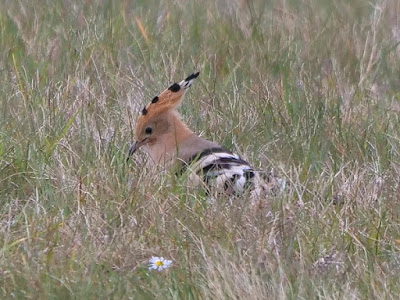 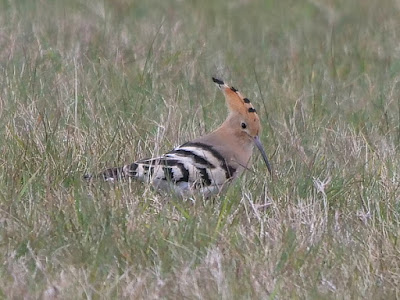 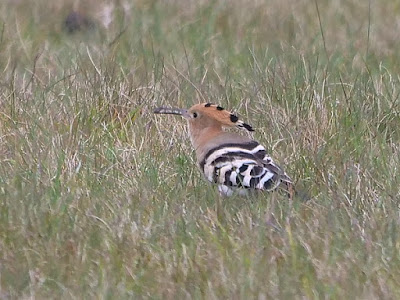 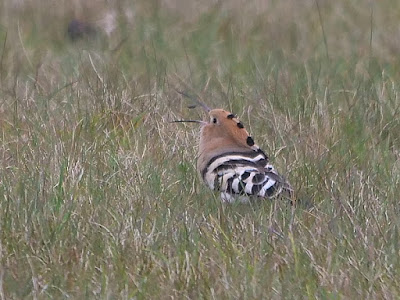 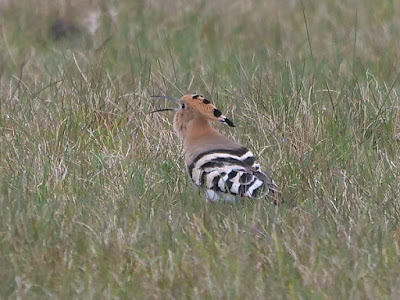 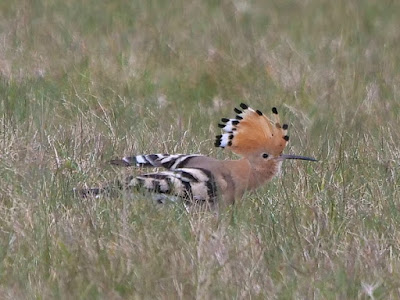 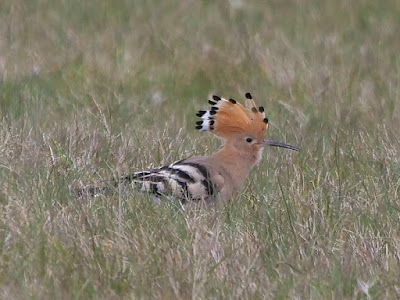 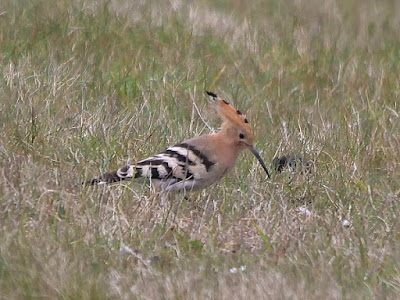 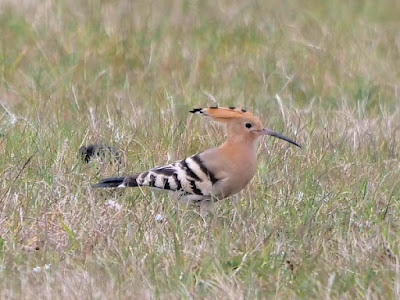 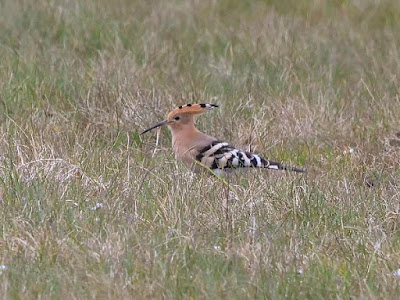 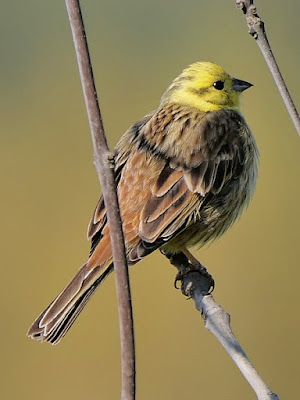 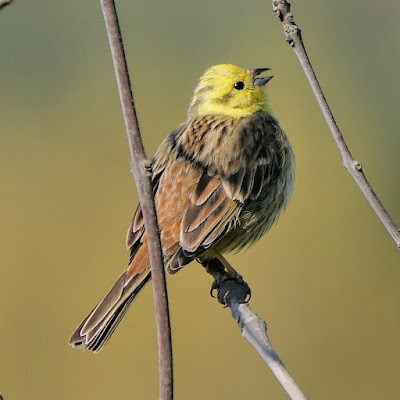 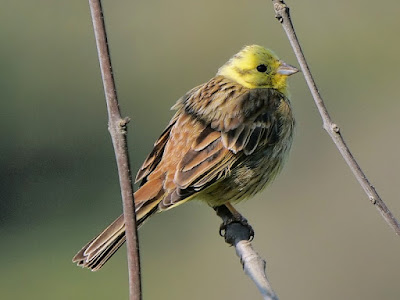 Wednesday 28 April. With moderate northerly winds forecast more northerly I again seawatched from Widewater rather than driving to Seaford. It turned out to be a big mistake as 5000 Commic Terns were recorded flying east there during the morning. Between 06:25-08:25 I saw none, a flock of 29 Brent Geese, 21 Whimbrel, 20 Black-headed, 11 Medterranean and 12 Common Gulls, 65 Sandwich Terns, 8 Gannets and a Swallow. I gave up and returned home to take Megan and Cookie to Dacre Gardens. From there we walked up to Beeding and back seeing 2 Red-legged Partridges, Sparrowhawk, 6 Swallows, Sedge Warbler, 3 Whitethroats, a male Grey Wagtail and 2 Linnets. 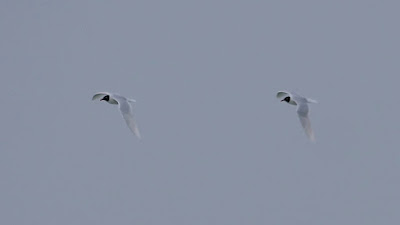 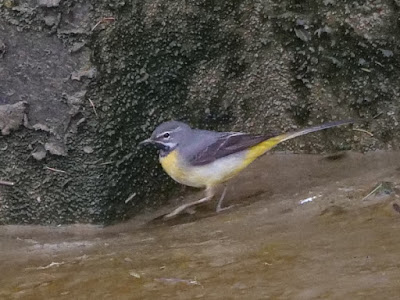 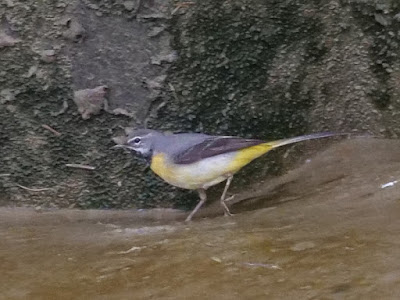 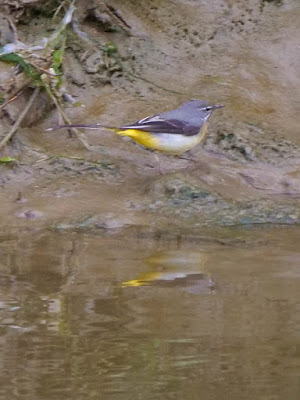 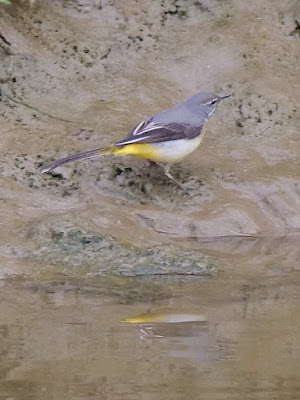 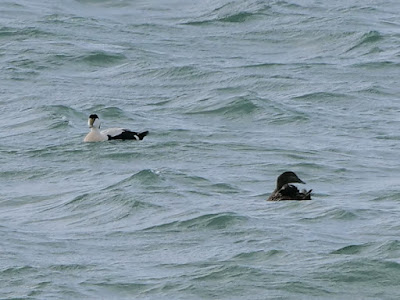 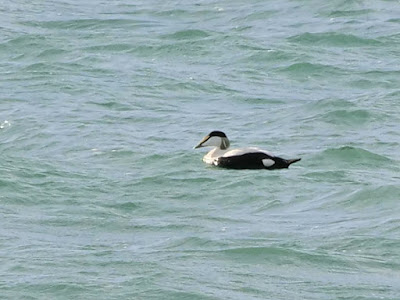 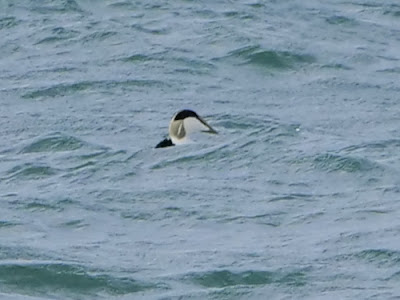 Sunday 25 April. I seawatched at Splash Point, Seaford from 05:55-10:55 in moderate NE winds but it was fairly quiet. I saw Gadwall, 5 Teal, 34 Common Scoter, Red-breasted Merganser, a Collared Dove (probably my first ever 'in off' record). 3 Oystercatchers, 6 Grey Plover, 90 Whimbrel, 190 Bar-tailed Godwits, 6 Mediterranean Gulls, 41 Sandwich and 40 Commic Terns (those identified split 10 Common and 8 Arctic), 4 Red-throated and 2 superb Black-throated Divers, 50 Fulmars, 40+ Gannets, a Peregrine and 2 Swallows. A low tide visit to the Adur with Cookie produced just 2 Oystercatchers and 2 Little Egrets. 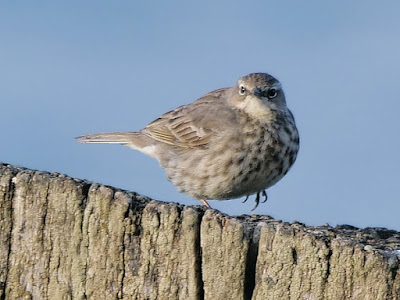 Saturday 24 April. A combination of factors (not expecting it to be much good in a continuing NE wind, having seen a Pom the previous day, and a late morning appointment for my second Covid vaccination) meant I seawatched from Widewater rather than Seaford. As it turned out it was a mistake. Widewater from 06:00-09:00 in moderate E winds was OK but Seaford was much better. I saw 12 Shelduck, 820 Common Scoter, the pair of Eider (present for their 4th day), 8 Oystercatchers, 80 Whimbrel, 15 Bar-tailed Godwits, 20 Sanderling, 9 Dunlin, Greenshank, 2 Kittiwakes, 7 Little, an adult Mediterranean and 30 Common Gulls, 88 Sandwich and 30 Commic Terns (24 of the latter identified as Arctics), 2 divers (1 definitely Red-throated), 10 Fulmars, 2 distant Manx Shearwaters, 63 Gannets and a Swallow. On the way home I met Megan and Cookie for a quick circuit of the Adur which produced a Little Grebe, 2 Swallows and a Reed Bunting. I returned to Shoreham Beach from 16:45-17:45 in a attempt to catch up with 3-4 Pomarine Skuas seen off Selsey earlier in the afternoon but the presumably passed too far out and all I saw were 11 Sandwich Terns, 3 Fulmars and 8 Gannets. I'm not a fan of afternoon seawatching on sunny days.
Posted by richard fairbank at 17:40 No comments:

Thursday 22 April. Another early start and just over 3 hours seawatching from Widewater before meeting Megan and Cookie at Mill Hill. During 05:55-09:15 I saw 2 Oystercatchers, 24 Whimbrel, 31 Bar-tailed Godwits, 2 Turnstones, 8 Common Gulls, 25 Sandwich Terns and 2 Fulmars flying east with 16 Gannets offshore. On the sea were the male and female Eider which had appeared after I'd left the previous morning, a female Goosander that flew in from the west, landed on the sea then drifted back west and 2 Great Crested Grebes while 6 Bar-tailed Godwits, were on the lagoon (I didn't have time to look for the 6 Whimbrel). On Mill Hill we saw Sky Lark, Long-tailed Tit, 3 Chiffchaffs, 3 Whitethroat, 6 Linnets, 5 Goldfinches and a male Yellowhammer. Late afternoon I cycled around the Adur seeing 3 Whimbrel and 10 Bar-tailed Godwits by the airport, no Cattle Egret near the Dog's Trust, the Eider still present on the sea off Widewater, 6 each of Whimbrel and Bar-tailed Godwit still on the lagoon, 2 Mediterranean Gulls distantly offshore and 7 Common/Arctic Terns flying east. Last stop was the Houseboat Channel on the Adur Saltings where the wintering Greenshank was still present, my first sighting of it this month. 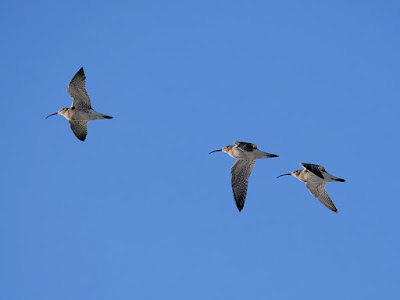 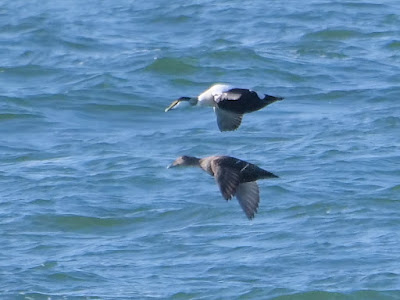 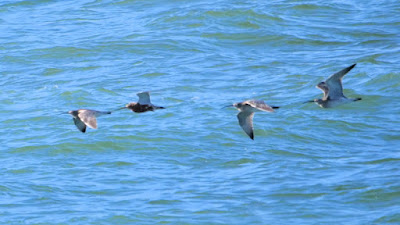 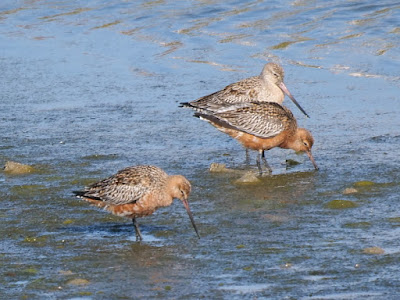 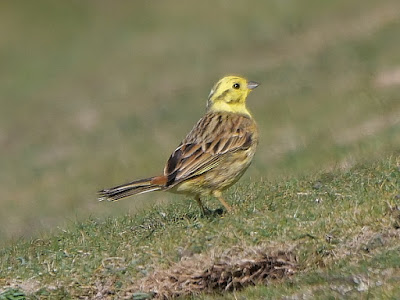 Wednesday 21 April. I seawatched from Widewater from 05:55-07:40. Flying east were 4 Wood Pigeons, 2 Oystercatchers, a winter Sanderling, 40 mostly adult Mediterranean Gulls, 26 Sandwich Terns, a distant diver and 2 Gannets. Two male and two female Wheatears were on the beach/groynes although none lingered. I continued to North Stoke for my South Downs Farmland Birds survey, or something similar. It was fairly uninspiring with highlights 4 Red-legged and 7 Grey Partridges, 4 Lapwings, 2 Red Kites, 2 Ravens, 8 Sky Larks, a Swallow, 7 Whitethroats, 19 Dunnocks, 5 Linnets and a pair of Yellowhammers.

Posted by richard fairbank at 17:33 No comments: