Sunday 28 January. An enjoyable day out to Dungeness with John King and David Buckingham, the latter driving us. We arrived at Pett soon after dawn and it wasn't long before some grey geese dropped into the back fields. They included 12 White-fronts which gave reasonable but not close views. A good start, as was a Marsh Harrier although an even more distant Barn Owl was less obliging. We moved on to Scotney where we saw another Marsh Harrier and hadn't been there long looking at the large flock of feral Barnacles when 200 Greylags flew in. Most landed on the water and I was checking through them when JK picked out the 2 Tundra Bean Geese on the bank. We stopped briefly at Boulderwall Farm where we saw 9 Tree Sparrows, two Marsh Harriers (inlcuding a fine male) and a Great White Egret before moving on to the fishing boats. Here in a flock of roosting gulls was the regular first-winter Caspian Gull, sitting back on but revealing its black primaries, thin white fingernail tertials and white head. I worked my way around for a side on view but it remained sitting. Martin Casemore arrived and I went back for a chat. He threw out some bread but none of the gulls were interested. The Caspian stood up and walked over the brow but I was talking to Martin and missed it. I again worked my way around and moved a little closer but it didn't move. I waited for some people to pass on the other side before moving a bit further but before I could do so all the gulls took off without me seeing it. We seawatched for a while seeing hundreds of Razorbills and fewer Guillemots but little else. Walking back to the car in another gull flock I saw the Caspian Gull standing up and took some hurried photos. We then tried the patch but no sign of the Glaucous Gull (Martin had failed earlier) or much at all and visited Lade where we saw the Long-tailed Duck before going onto the reserve. We checked the gulls roosting on Burrows Pit, in the hope the Glaucous might have been there but it wasn't. We saw a couple of North Thames Herring Gulls (R6XT and what was probably T8BT) but the rings were very hard to read at distance and through a glass window. DB then saw a yellow-ringed gull, X595, but it was walking and so unreadable when I got onto it and immediately took flight. Frustrating but we thought little of it at the time. We walked around the reserve seeing 3 Smew, 6 Goosanders, a Slavonian Grebe before returning to look through the gulls. This time a Norwegian Great Black-backed Gull JA803 caught our eye. Hanson Hide overlooking the ARC pit produced the Black-throated Diver and Chris Ball pointed out a Firecrest with 2 Chiffchaffs in brambles just outside his window. Nice. I then realised I'd left my notebook in Firth Hide while reading gull rings and we headed back for it. It had gone but returning to the car Martin approached with it. I mentioned we'd read a few colour rings and he checked them against his database to see if he'd seen them. Much to his amusement and to a lesser extent ours the yellow ringed 'Herring' Gull was almost certainly a Caspian (he'd seen X594 at Dungeness this winter). Oops. Note to self, spend more time looking at birds rather than the rings on their legs, not that it gave very long for either. We headed back home over Walland Marsh seeing a flock of Fieldfares but only Mute Swans although at our final stop as the light was going DB thought he heard the Bewick's calling in the distance. CB had 19 come into roost on the ARC at 17:10. Back at home I looked at my images of the Caspian Gull and realised I had seen two. The one seen after the seawatch was a different first year. It had a yellow ring on and although very distant and most of the ring was obscured it started with an "X". So not only had we overlooked X595 being a Caspian Gull when we'd seen it on Burrows Pit I'd also failed to notice earlier that our second Caspian Gull sighting was of a different bird to the first - not least because it had a large yellow ring on I'd completel failed to notice! Note to self, spend more time looking at birds rather than photographing them. Not that this episode did anything to detract from a very enjoyable day. 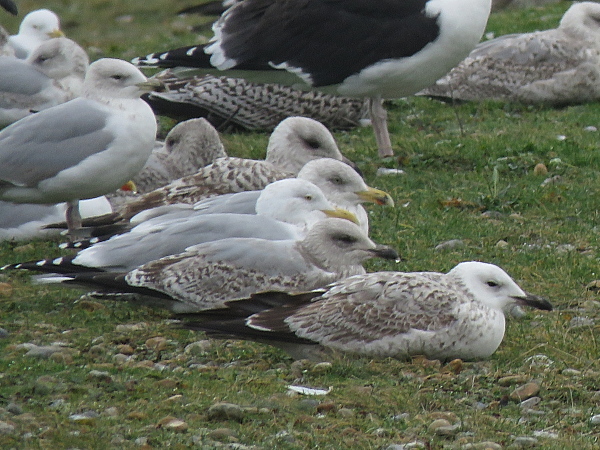 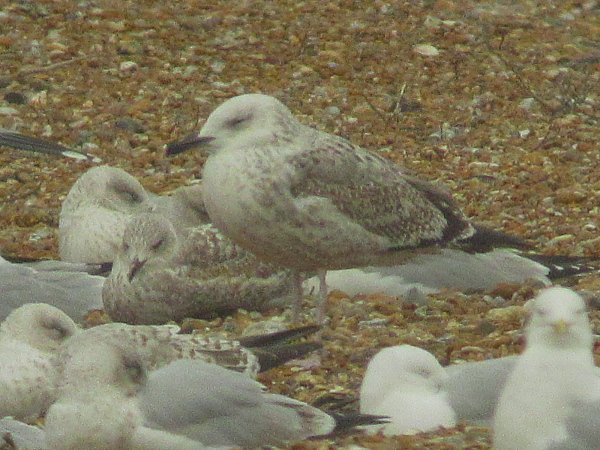 Saturday 27 Janaury. An hour and a half in Rewell Woods with Meganand Cookie produced a Marsh Tit, a Mistle Thrush, 3 Redwing and no finches at all. Disappointing, but Cookie needed ot be walked somewhere.

Friday 26 January. Nothing at all at Shoreham Fort.

Posted by richard fairbank at 21:20 No comments:

Wednesday 24 January. A morning visit to Widewater with Cookie in very blustery conditions was enlivened by male and female Goosander (nice the female might have found a potential mate) and male and female Red-breasted Merganser on the western lagoon. The Mute Swan family was still in residence to but the youngsters will surely be encouraged to leave soon. 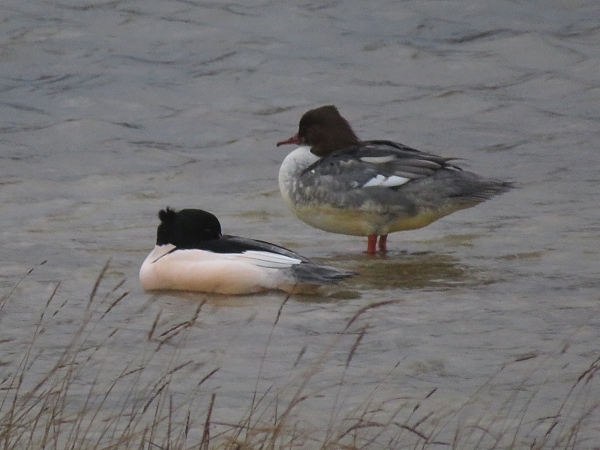 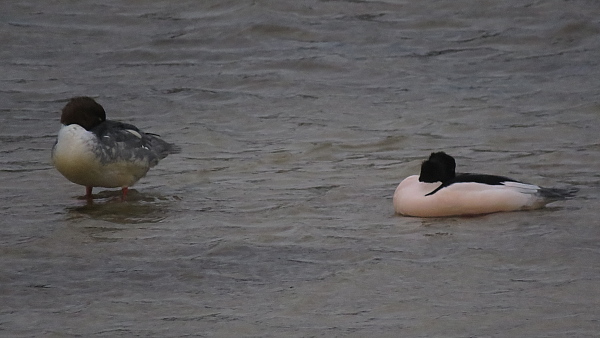 Sunday 21 January. Another horrible day to be out. We managed a walk with Cookie along Worthing seafront seeing 5 Sanderling. Later Megan and I went to the Dome, our favourite cinema to see The Post. Very good.

Saturday 20 January. A wet and windy day when a low tide visit to the Adur was all I managed with the wintering Curlew seen near the Toll Bridge.

Friday 19 January. A cold frosty morning without commitments (no Cookie) so after scraping the car I drove to the Black Rabbit for dawn and soon wished I'd brought a warmer coast (and a decent torch). A Tawny Owl was calling nearby and as the light improved a Barn Owl was flying over the fields opposite. A Marsh Harrier and 7 Little Egrets flew north from roost but a walk up river failed to produce any swans. Two male Mandarins were hiding beside Swanbourne Lake and I saw 3 Bullfinches along the Mill Stream where another birder told me he'd seen two Hawfinches near the tennis courts although I couldn't find them. I then walked around Arundel Wildfowl & Wetlands Trust seeing two Water Rails, Grey Wagtail, Chiffchaff and 4 more Bullfinches. An enjoyable morning. Some nice Harlequins in the collection too, but no Scaly-sided Mergansers. 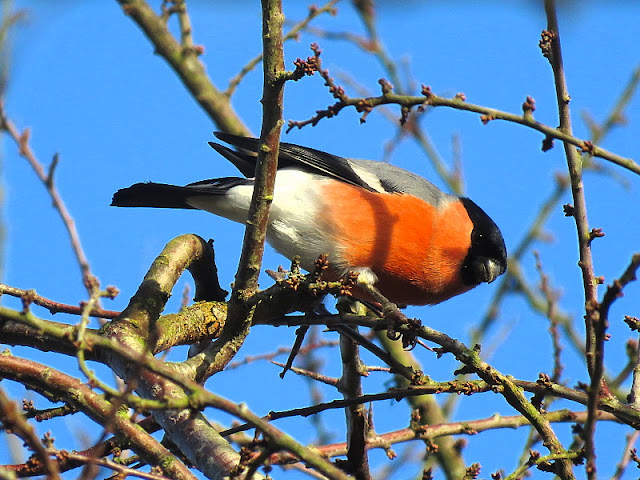 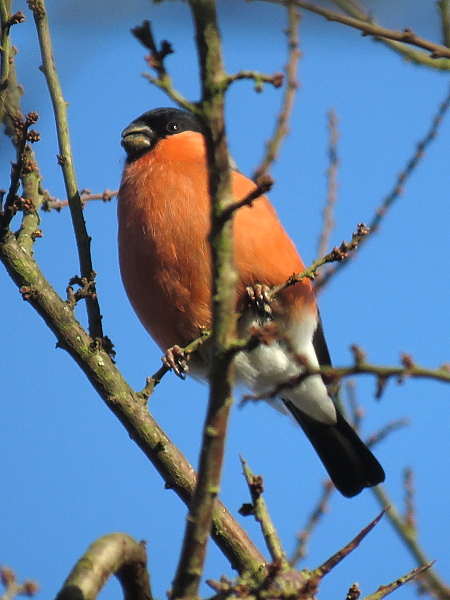 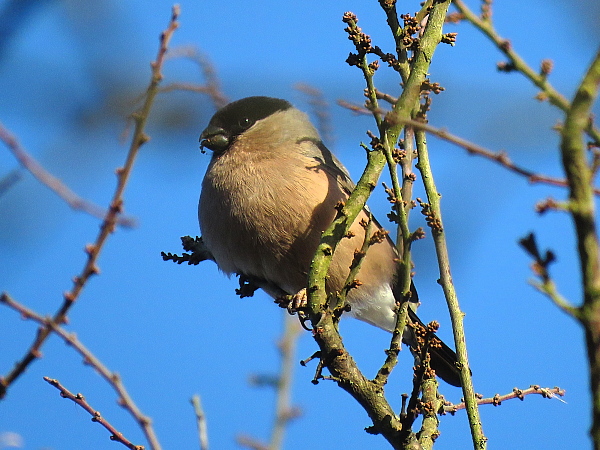 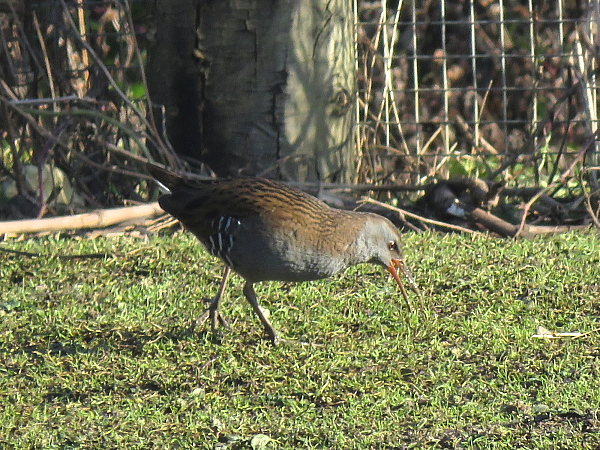 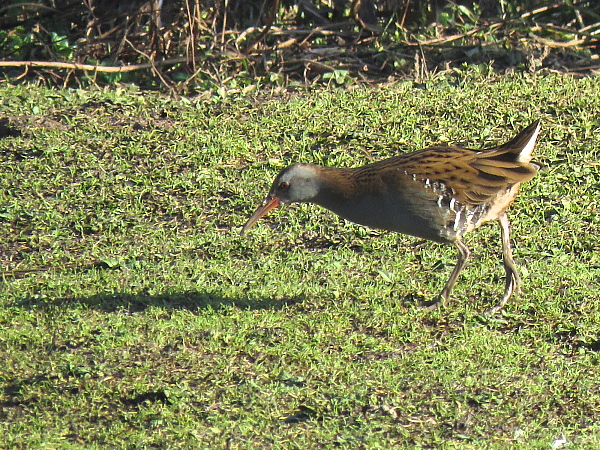 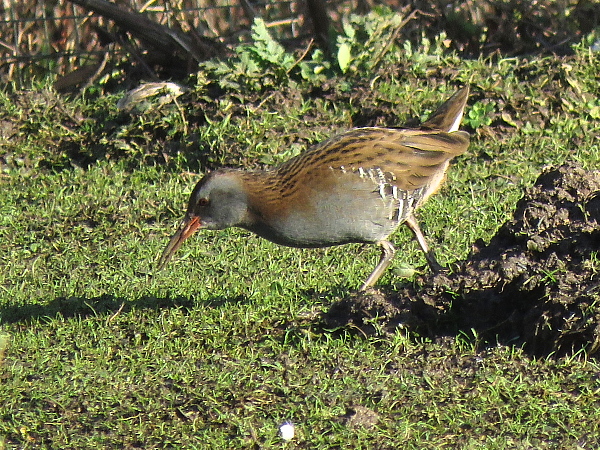 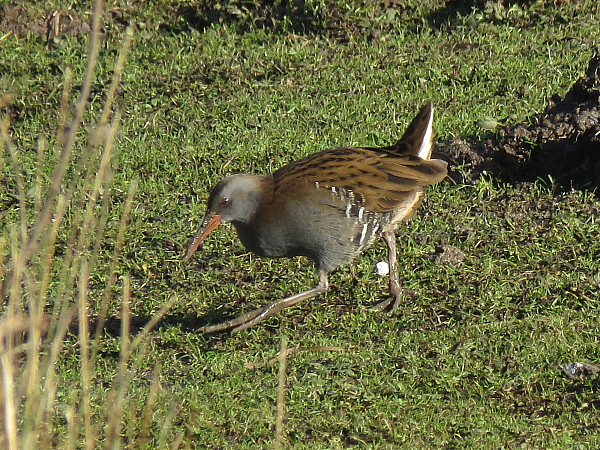 Wednesday 17 January. Four Purple Sandpipers and a Rock Pipit were on the middle jetty at Shoreham Harbour with a male Red-breasted Merganser at Widewater but no sign of the Goosander.

Sunday 14 January. A day out in East Sussex with John King (and Cookie). We met in Patcham and drove to Arlington Church where we found a reasonable selection of finches in the sunflower fields which included 3 Brambling and 4 Bullfinches. Next stop was Sovereign Harbour where John found the Black Guillemot in the western part. West Rise Marsh was a disaster - no birds of note, John fell in a ditch and Cookie got very muddy. We finished on Pevensey Levels where a Marsh and then the smart 3CY male Hen Harrier put in an appearance. 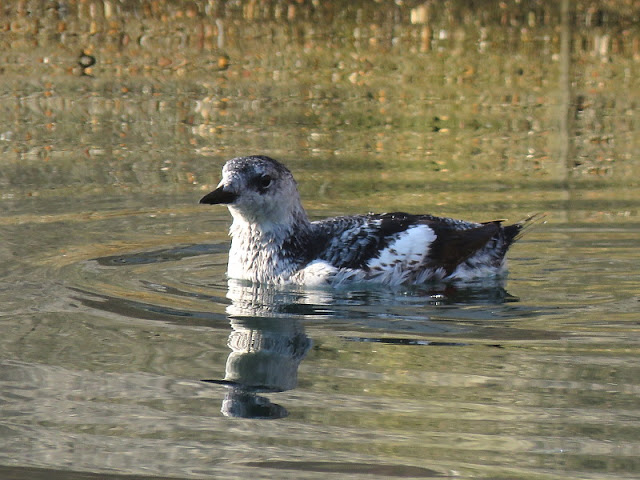 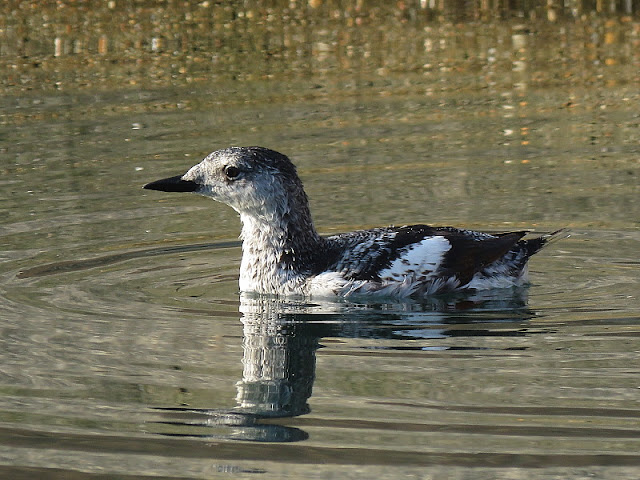 Posted by richard fairbank at 22:32 No comments:

I always like to see the first 100 species of the year. It usually takes me a few days (although in 1995 I'd seen 104 by the end of 2 January) but this year took 13. Rather embarrassing when the Splash Pointers managed 100 by noon on their bird race day (see http://seafordbirding.blogspot.co.uk/2018/01/new-year-bird-race-2018.html)

Monday 1 January. I started the year with Cookie at Sovereign Marina where Black Guillemot was my 10th species of the year and Common Guillemot the 8th. We went on to a very flooded West Rise Marsh but soon gave up as the water level was too much for Cookie's legs and my short Wellingtons. There were about 400 Great Black-backed Gulls roosting in a flooded Lower Cuckmere, fewer than on previous visits, and 200 Herring Gulls on the floods. A contender for a third winter Caspian Gull didn't give enough away to identify and never had its head up for images. A not uncommon behaviour for a more interesting looking gull in the Cuckmere, but maybe they are only more interesting because they don't show very well? We finished at Newhaven where the Great Northern Diver was off the end of the west breakwater. I then called in to see my mum finishing the day early on 43. 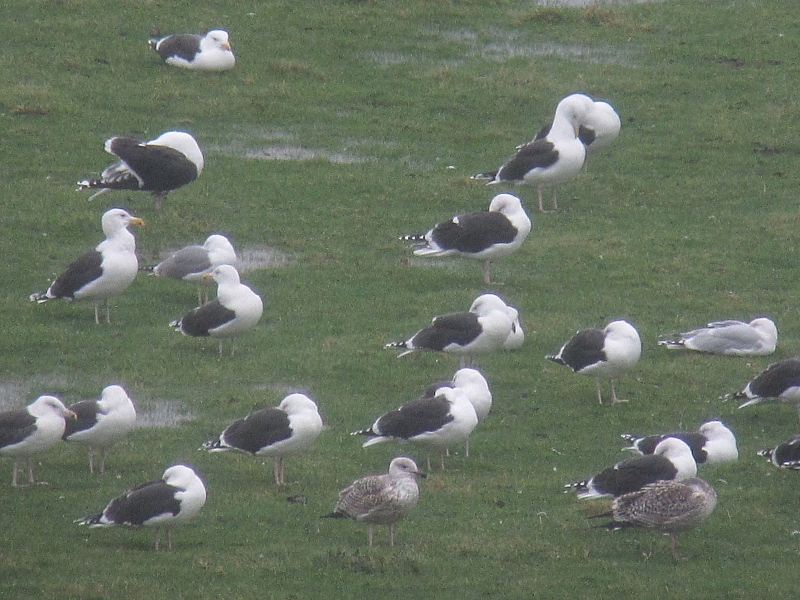 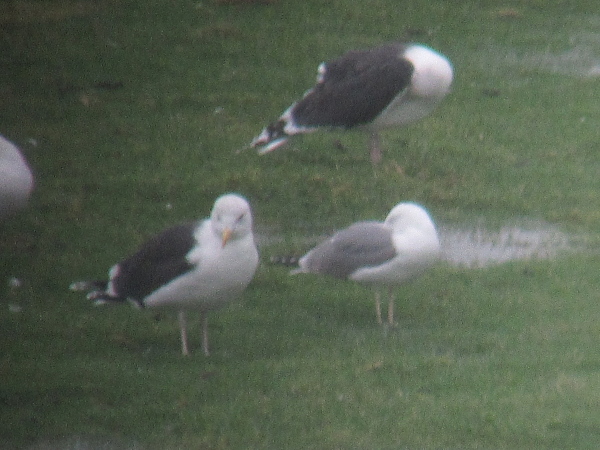 Wednesday 3 January. Shoreham Fort with Cookie produced 3 Purple Sandpipers and a Greenfinch while the female Goosander was on Widewater with 2 Common Scoter on the sea and a Red-throated Diver offshore, both picked out by David Buckingham. Later an afternoon walk with Megan around Beeding Hill added nothing. 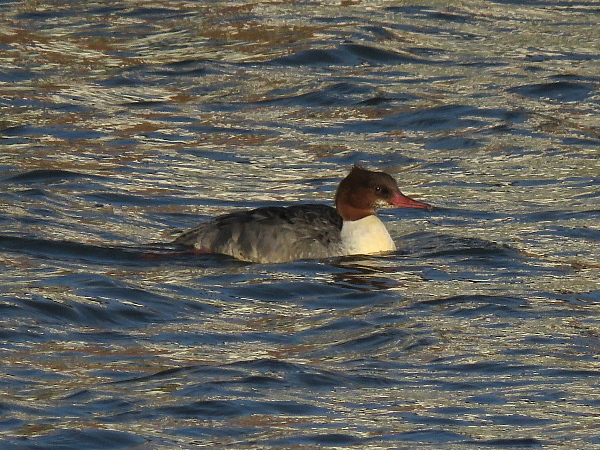 Saturday 6 Janaury. Cookie and I parked in Henfield and walked down the old railway line to the levels where we saw Alan Kitson, the 5 Bewick's Swans and 76 overflying Barnacle Geese but few duck probably due to the presence of shooters. Later at Shoreham Fort a single Purple Sandpiper and 5 Greenfinches. 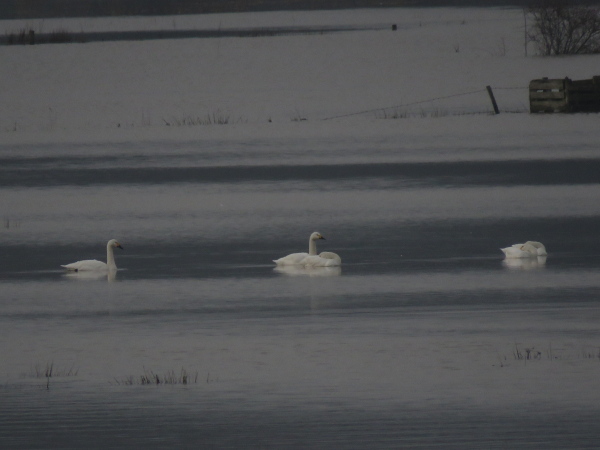 Sunday 7 January. Megan and I took Cookie to Rackham and Parham Park seeing a superb Firecrest, 2 Mistle Thrushes, 11 Long-tailed and a Coal Tit as well as decent numbers of common dabbling duck. Back home and off duty I went to Pulborough seeing amongst others Marsh Harrier, a distant Dunlin, the very distant Temminck's Stint (hardly identifiable views after an hour or so of searching), 5 Ruff, 11 Black-tailed Godwits, Fieldfare, 11 Redwing, Hawfinch (good flight view behind the church) and 4 Bullfinches. A good visit taking my year total to 89. 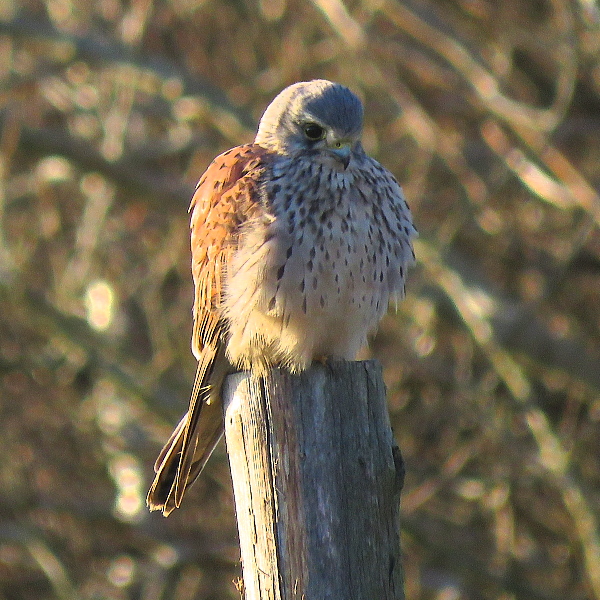 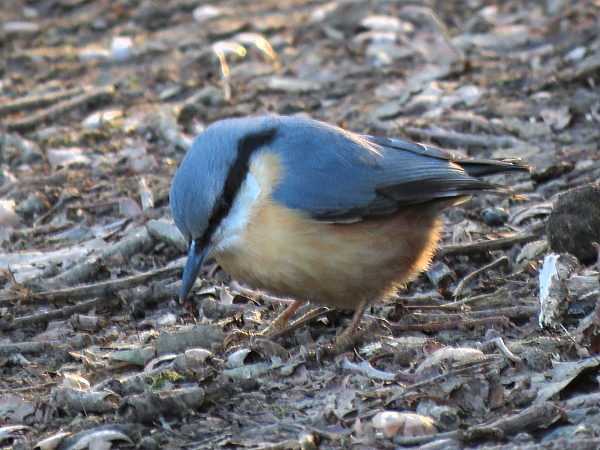 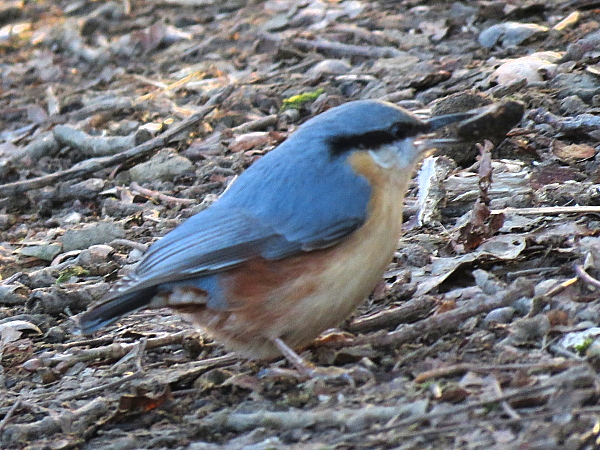 Monday 8 January. A Rock Pipit was the only notable bird seen during a brief morning visit to the Adur with Megan and Cookie. I returned in the afternoon with Cookie seeing the Greenshank by the houseboats where I was helpfully told that the Avocet was near the Toll Bridge. We then saw a male Red-breasted Merganser and the female Goosander on Widewater. 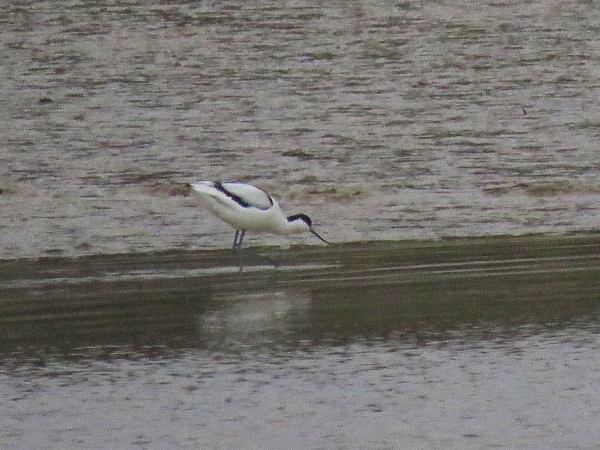 Friday 12 January. We went to Goring Gap and walked back towards Worthing. Decent numbers of the expected waders on the beach and 7 adult Mediterranean Gulls in a smallish mainly Common Gull roost in one of the back fields. 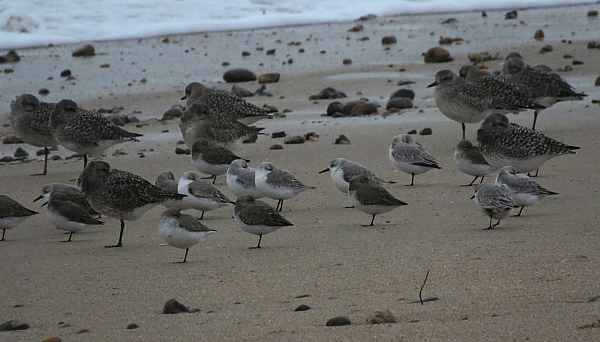 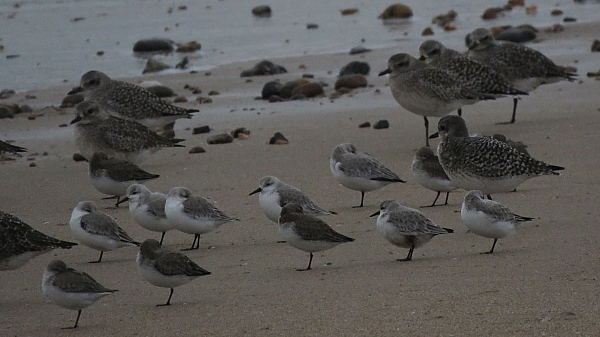 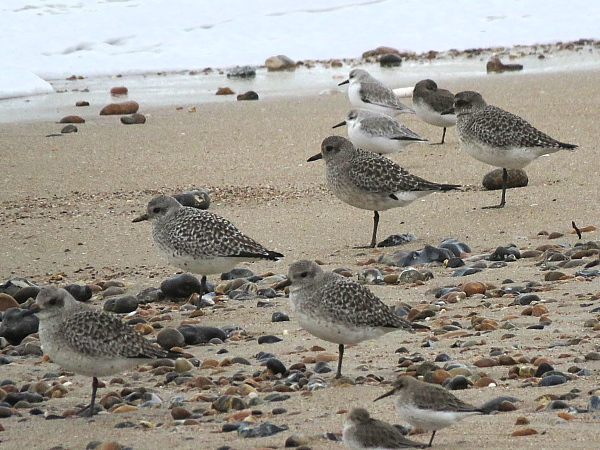 Saturday 13 January. A free morning for birding, I was at Church Norton at 08:00 where I met David Buckingham. The tide was in almost as far as t was coming and higher than I was expecting as my app was set to London Bridge! DB had seen the Red-necked Grebe before I arrived coming in with the tide and soon pointed it out to me as it did a circuit of the harbour. Very nice. There were lots (500+) Brent Geese in the harbour but the tide was too high for many waders. We looked out to sea, which was very hard work, but did see 2 (a pair) of Velvet Scoter flying west before landing and becoming lost in the troughs. Also a Sparrowhawk, Peregrine (my 100th species for the year) and a few Mediterranean Gulls and both Adam Bowley and Andrew House didn't have much to add. I went on to West Dean Woods, eventually seeing the Little Owl near Stapleash Farm and 1-2 distant Hawfinches and 7 Bramblings near Monkton Farm. Also at West Dean 5 Red Kites, 35 Redwing, 3 Fieldfares, a Mistle Thrush, 5 Marsh Tits and a Nuthatch. I left at 13:30 to get home, collect Cookie and see my mum. 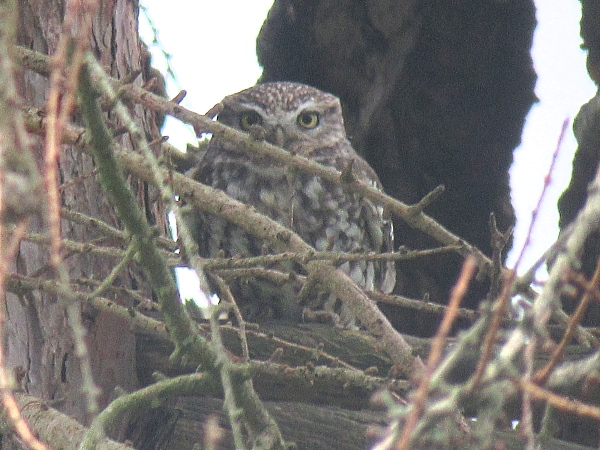 Posted by richard fairbank at 00:01 No comments: