Mediterranean Gull on the Adur (27-31 December)

The decade finished with a Mediterranean Gull on the River Adur. It had me thinking about when I'd seen my first during a seawatch at Portland in April 1974, by then I'd been birding for 4 years. It took me until March 1980 to see one in Sussex (a second-winter at Shoreham, then only my 17th in Britain). How things have changed. Although I don't see them on most visits to the Adur this year I've seen about 50 including 37 on the Adur on 10 July. A little further afield I saw 514 flying east at Widewater in 10 hours of watching during 20-22 April, although my day record is 528 past Seaford in 9.5 hours on 23 April 2017 when I had to leave.

Monday 30 December. Megan and I took Cookie to Brooklands where we saw 4 Teal, Goldcrest, Stonechat and 6 Reed Buntings.

Sunday 29 December. I took Cookie to the Adur seeing 129 Lapwings, 11 Redshank and 19 Linnets. Later with Megan we heard a Song Thrush on Mill Hill.

Saturday 28 December. Megan, Nessa and I took Cookie to Shoreham Fort and along the boardwalk seeing 9 Turnstones, Purple Sandpiper and 37 Greenfinches. Later I dropped Megan and Nessa in Chichester and took Cookie to Hayling Oysterbeds. Highlights there were 2 Goldeneye, 24 Red-breasted Mergansers, 3 Black-necked Grebes and a Marsh Harrier. Forty-five minutes before dusk in the hide at Chichester Yacht Basin perhaps unsurprisingly failed to produce the hoped for Bittern or Bearded Tit. Three Egyptian Geese, 39 Pheasants and heard Water Rail and Cetti's Warbler were no consolation at all.
Friday 27 December. I took Cookie to do my Winter Downland Bird Survey west of the Burgh but it was a mistake as soon after we arrived some not so close shooting started. Cookie was not impressed and had to be kept on her lead to prevent her from running off. Highlights were 3 Barnacle Geese flying up the valley, over my square and back down again, 9 Grey Partriges, 23 Stock Doves, 2 Red Kites (and 5 more from the Triangle on our return), 15 Sky Larks, 51 Pied Wagtails, 32 Meadow Pipits, 73 Linnets and a single Reed Bunting.

Posted by richard fairbank at 17:58 No comments:

Thursday 26 December. I took Cookie to Shoreham Fort, Widewater and the Adur Saltings arriving at the latter about an hour before a big high tide. At the Fort we saw 11 Brent Geese flying E, 2 Purple Sandpipers on the wooden jetty and Cookie flushed 18 Greenfinches. Kingfisher and Stonechat were the best at Widewater where, given the rough sea, the lack of any mergansers was a disappointment. The rising tide at the Saltings put up 91 Snipe and revealed 34 Teal. Also seen were the Greenshank and about 60 Redshank (some slipped away while I was counting snipe) but the Curlew was not seen. I then left Cookie at home and drove to Seaford spending 13:00-16:00 with the gull flock opposite Harry's Bush. About 800 Great Black-backs were present in a rather straggly flock, I'd hoped for more given the high tide and strong southerly wind. Colour rings were seen on seven although two were only partially read. The flock included only about 10 Lesser Black-backs, fewer than 50 Herrings although they included one adult Scandinavian argentatus, and two adult Yellow-legged Gulls. One first-winter gull looked to have some Caspian genes but remained mostly hidden. Another first-winter was either a faded argentatus Herring or perhaps a Viking Gull (Herring x Glaucous hybrid) but was sleeping and didn't show its bill. Also seen were 14 Brent and 2 Barnacle Geese while a Buzzard flying low across the valley caused some of the gulls to raise their heads.

Wednesday 25 December. HAPPY CHRISTMAS, not that I'm at all religious. I took Cookie to Shoreham Fort where 2 Purple Sandpipers were on wooden jetty. At the Adur Saltings we had to leave before the tide covered them all although did see 26 Teal, 98 Lapwing, 49 Snipe, Curlew, Greenshank and 51 Redshank. A later afternoon walk with Megan and Cookie in Hove Park was expectedly birdless.
Posted by richard fairbank at 22:44 No comments: 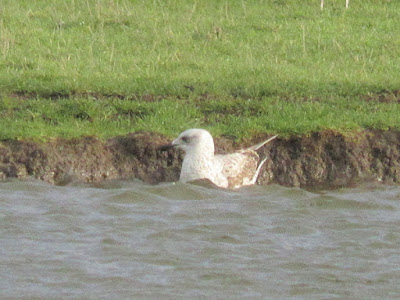 Posted by richard fairbank at 19:34 No comments:

Thursday 19 December. A morning wander around Cissbury looking for the Great Grey Shrike sparked into action when DS found it in the SW corner. I was nearby but it had flown north before I reached him. DM then saw it flying north again and fortunately I caught up with it soon after when BFF picked it up sat out on gorse then dead branches near the trig point. We approached but were over 200m away when it took flight and was eventually lost flying west in the direction of Findon. Otherwise Cissbury was fairly quiet with Stock Dove, Green Woodecker, Jay, Goldcrest and 2 Mistle Thrushes seen and Grey Partridge and Raven heard. The shrike was too far away to photograph although I managed record shots of a grey, white and black plastic bag on a very distant tree. A no gull day in so far as the tide was too high by the time I returned to Shoreham, I still spent all afternoon sorting yesterday's images which involved a fair amount of head scratching.

Wednesday 18 December. With an afternoon high tide and the wind freshening from the SSE I went over to the Cuckmere spending 13:45-15:45 scanning the gull flock opposite Harry's Bush. About 2400 large gulls were present, roughly 2000 Great Black-backs, 250 Lesser Black-backs and 150 Herring including at least 9 argentatus.More notable were 6 adult and 2 third-winter Yellow-legged Gulls and a third and 2 first-winter Caspian Gulls. I also saw but incompetently photographed what looked good for an adult Caspian Gull but it was rather distant while another third-winter or near adult looked good too. One of the first-winters was almost certainly the bird MRE had seen earlier in the week. The other, despite the range, was the best looking first-winter I've seen in Sussex. It took me half an hour to notice but was then visible in the roost, with a bit of moving around, until I left. Earlier in the day a low tide visit to the Adur with Cookie produced a puzzling first-winter gull showing features of several species. The tide wasn't low enough and the river too full for much of a sandbar to form but a Le Havre Great Black-backed Gull 45N was in the small roost there while t he Polish Black-headed Gull T5PE was seen again opposite Ricardos. Other birds seen were 100 Lapwings, 12 Redshank, and a Buzzard feeding in a field by the fly-over. 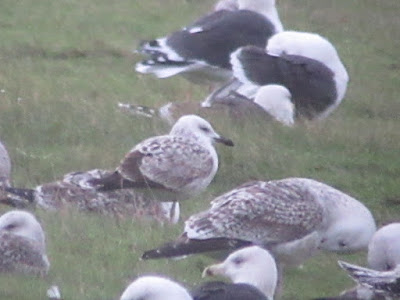 Tuesday 17 December. I visited the Adur opposite the Airport with Cookie seeing a pair of Teal, 90 Lapwings, 12 Redshank and an adult Mediterranean Gull. Amongst 100 or so Herring Gulls were two bearing North Thames colour rings. One was R7LT which I'd seen there seen in May 2018, it had been ringed as a 4CY at Pitsea in January 2015 and was seen in Hove in June 2016. The other was more distant and started N4 but walked into shallow water before I moved closer to read the rest of its ring. There it stood, ring obscured, for 20 minutes before swimming to mid river and eventually being lost amongst other gulls. Rather frustrating, especially as its first two characters did not match any I'd seen before. 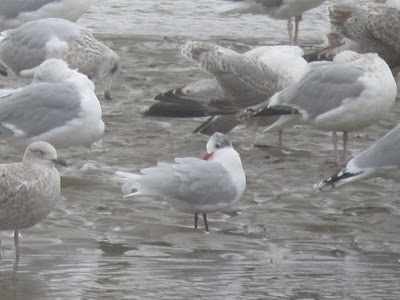 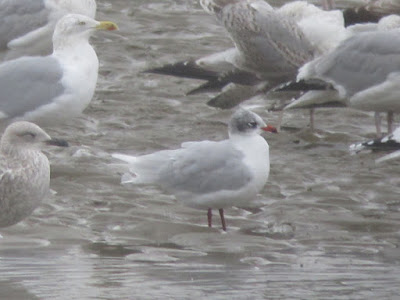