Gulls in the Cuckmere (27 January)

Friday 27 January. A morning high tide and forecast strong winds made a visit to the gull roost in the lower Cuckmere tempting particularly as one or two Glaucous Gulls had been seen there, one with some degree of regularity. I met John King at the barn at 09:00 and we walked down to Harry's Bush. About 1000 birds were present but an initial scan of the flock failed to produce a Glauc. We moved down to the footpath and at 09:30 started looking through the flock more carefully. We soon saw several colour-ringed Great Black-backs, then towards the back of the flock what appeared to be a near adult Caspian Gull which was on view for 20 minutes mostly preening wit its head out of view. At 10:20 a first-winter Glaucous Gull flew in and showed very well. At 10:55 a first-winter Caspian Gull flew in landing by the nearest pool where it proceeded to wash. It was constantly on the move, making it hard to get images, before walking into the flock and obscuring itself. About 15 minutes later the gulls all flew, most landing a bit further away in the field, but it couldn't be located. I increased my colour-ring total to 6 then we saw a third-winter Yellow -legged Gull and finally at 12:05 what I thought at the time was an argentatus Herring Gull appeared, albeit a very white headed individual. It was mostly sleeping but closer examination of images revealed it to be the original near adult Caspian Gull. It, the Glauc and the Yellow-legged Gull were still present when we dragged ourselves away at 12:35. While watching the gulls a couple of Ravens flew over calling, always a nice distraction. 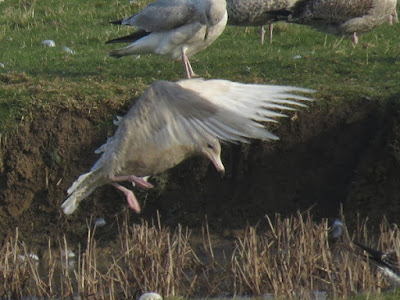 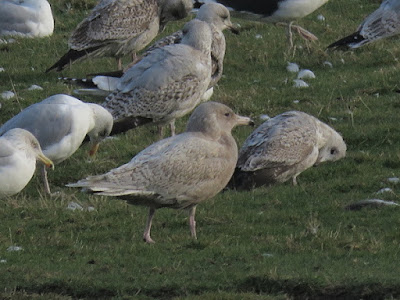 Wednesday 25 January. An impressive movement of Razorbills off Shoreham Harbour with 630 west in 20 minutes from 09:00. It was then as if a tap had been turned off. Also 30 Razorbills and 11 Great Crested Grebe on the sea, 4 Red-throated Divers east, a Purple Sandpiper and 4 Turnstones on the harbour and 4 Gannets offshore. The only passerine seen was a Meadow Pipit. Megan and I then spent 90 minutes walking around an almost birdless Rackham and Parham Park (where the lake was frozen), seeing a single Nuthatch and hearing Green Woodpecker. A low tide visit to the Adur in the afternoon produced just 5 Redshank and hardly any gulls.

Tuesday 24 January. A Peregrine on the Power Station on my way to work. It was too cold in the easterly wind to stop and get my binoculars out.
Posted by richard fairbank at 15:56 No comments:

Sunday 22 January. A visit to Shoreham Fort, sunny and little wind but the car said it was -4C and it was easy to believe it. 12 Great Crested Grebe and 41 Razorbills were on the sea with another 10 unidentified auks further out. A nearer bird looked like a Guillemot but dived before I could be sure and I never saw it again. Only 5 Turnstones are around the harbour despite the tide being fairly high still and no passerines at all. The visit was salvaged by 2 Kingfishers on the inner jetty. A late afternoon visit to Beeding Brooks produced 2 Egyptian Geese, Water Rail, 20 Fieldfares, 2 Redwinngs, 4 Yellowhammers, 12 Corn Buntings and the hoped for, but rather distant Barn and Short-eared Owls. 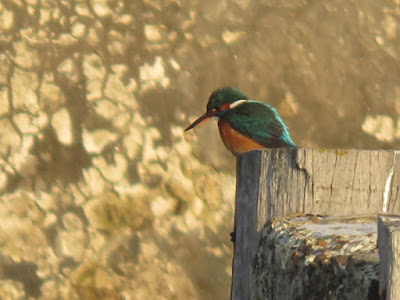 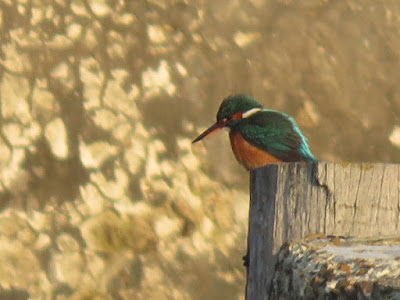 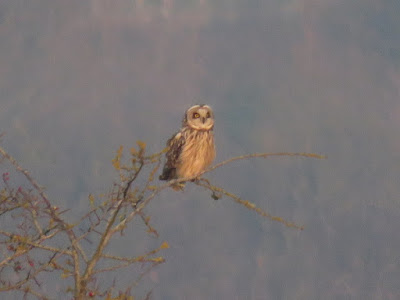 Saturday 21 January. Megan and Nessa were visiting Petworth House to see the latest Turner exhibition. I'd seen an earlier one which was enough for me so i dropped them off and took Cookie for a walk in the park. Both Lower Pond and the main lake were frozen, the latter with a little open water around the edge of an island. Birds were few and far between with 2 Egyptian Geese flying over, a pair of Mandarins, 20 Redwings, 4 Mistle Thrushes and a Nuthatch.  Late afternoon I went to Burton Mill Pond. It was also frozen with just one section of the main channel ice free. It held at least 350 Mallard and about 20 each of Pochard and Tufted Duck. A Kingfisher flew across the pond, 30+ Pied Wagtails roosted in the reedbed but disappointingly no Bitterns had appeared by 17:15 when I was the last to leave, the light being too poor to see anything.

Friday 20 January. A morning keeping my mum company while my dad was taken too the eye Hospital. Late afternoon I took Cookie up onto the Downs above Shoreham where a Little Owl was sitting out in the sun. 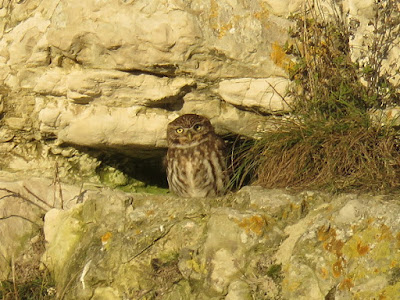 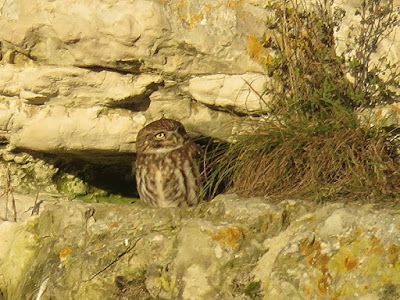 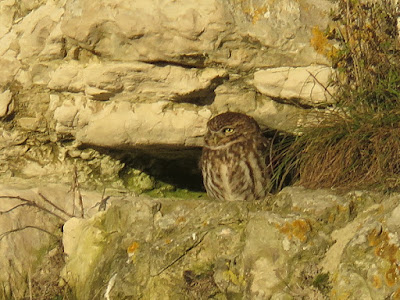 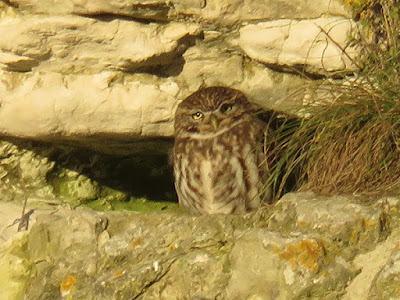 18 January 2017.  Cookie and I started at West Rise Marsh where the Long-tailed Duck was playing hard to see, spending twice as long under-water as above it. Walking around the pool and then the meadows and reedbeds to the south produced 2 Water Rails that we flushed into the reedbed, 6 Meadow and at least 2 Water Pipits (1-2 were seen quite well but not heard and two together heard but not seen well) and a Stonechat. We continued on to Seaford Head and, parking by Chyngton Farm, walked down into the Cuckmere to check the gull flock. There were at least 800 Great Black-backs roosting and not very good views of an adult that structurally looked good for Caspian but was perhaps a little pale mantled.  Our last stop was Newhaven Tidemills where we bumped into John King and didn't have to wait long to see the Serin. A walk to the east arm produced two Stonechats but no roosting Purple Sandpipers despite the high tide. 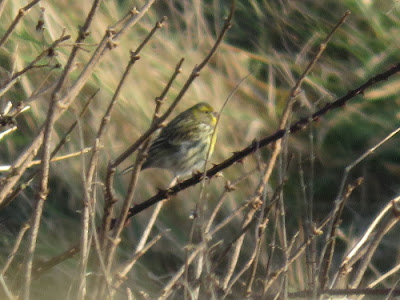 Posted by richard fairbank at 15:21 No comments: