Tuesday 28 September. I took Cookie up to a very windswept Mill Hill where in an hour we saw Buzzard, 7 Swallows, 5 Chiffchaffs and 2 Blackcaps. Megan was working at Southwick Library but it wasn't nice cycling weather and she was a bit short of petrol so I took her over with the idea of coming home via the Adur and a low tide look through the gulls. With news of 5 Balearic Shearwaters past Beachy by 09:00 I decided Widewater might be a better option and with Cookie in tow started seawatching just before 10. Light was difficult but birds were moving and after 45 minutes I picked up a distant group of 3 Balearic Shearwaters arcing above the waves as they headed west. Five more did the same at 11:14, 3 at 11:39, 2 at 11:49 and 1 at 11:50. My 14 Balearic Shearwaters pale in comparison with the 150 seen off Beachy that morning but for me they more than quadrupled my previous highest Sussex counts. All were only picked out when above the horizon although the groups could be followed for a couple of minutes as they were visible almost as often as not. Also heading west were 35 Black-headed, 6 Mediterranean (an adult, 2 second-winters and 3 first-winters) and 26 Common Gulls, 22 Sandwich Terns and 70 Gannets. We called in at the Adur on the way home. Of most interest were 2 Mediterranean Gulls (adult and first-winter), 85 Great Black-backed Gulls (including 50H), 10 Lesser Black-backed Gulls (including V7EE), 14 Ringed and a Grey Plover. The day, my last in Sussex for a while, turned out a lot better than I was expecting. 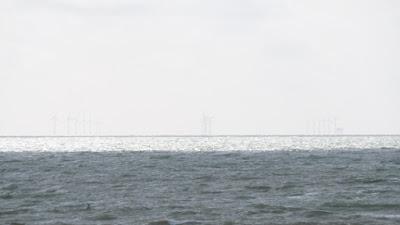 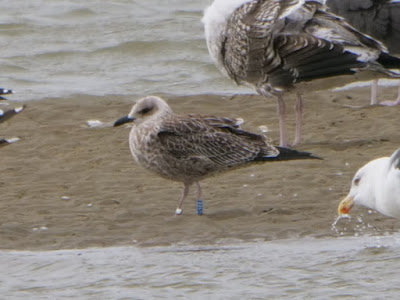 its wings go on and on

Monday 27 September. With a forecast of strong westerly winds and heavy ran showers Megan and I took Cookie to Brooklands. Me hoping there might be some gulls sheltering on the lagoon. There weren't but then the weather was nowhere near as bad as the forecast suggested with blue skies and a few scattered clouds. We saw the Mute Swan family (adults with 6 full-sized cygnets), 2 Teal, a Grey Heron, single Great Spotted and Green Woodpeckers, Jay and 3 Chiffchaffs.

Sunday 26 September. Megan was Covid stewarding in Portslade so after I dropped her off and Cookie and I spent much of the morning on the Downs. We walked from Foredown Tower to Devils Dyke and west along the South Downs Way. We had only just turned south on a permissive footpath to Perchinghill Barn when distant shooting started from further down the valley and Cookie was off. Back on the South Downs Way she was insistent on continuing west and I was thinking we might have to walk home by way of Truleigh, Beeding and Mill Hills and collect the car later. Half way up Edburton Hill she had a change of heart and I persuaded her to return via Fulking Hill. I saw Buzzard, Kestrel, 8 Skylarks, 70 Swallows, 8 House Martins, 3 Chiffchaffs, Mistle Thrush, 2 Wheatears, 7+ Yellow Wagtails and 140 Meadow Pipits. In the afternoon Megan and I walked down to the allotment with Cookie seeing Sparrowhawk and Painted Lady. 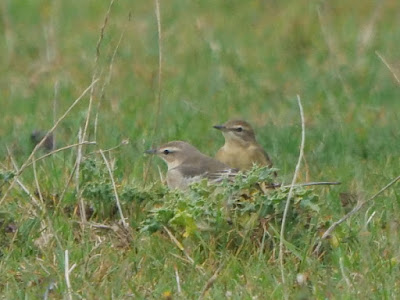 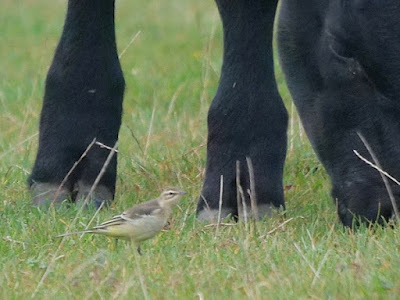 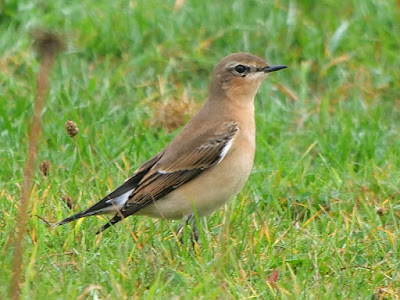 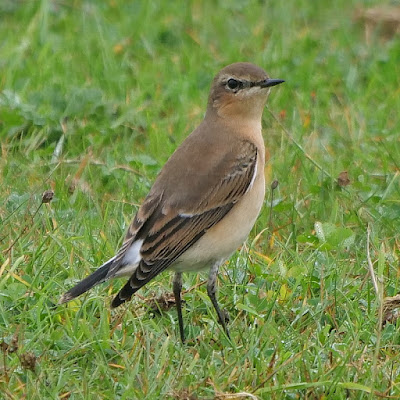 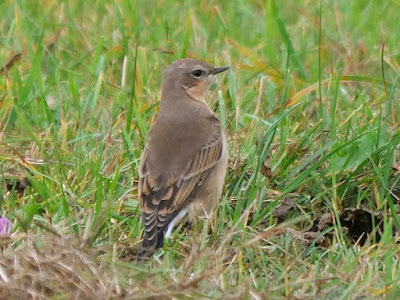 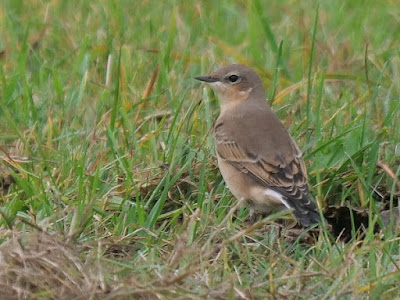 Saturday 25 September. We took Cookie to Widewater and walked along the beach to Lancing and back. Megan even paddled. I saw a Ringed Plover, 2-3 Sandwich Terns, a Wheatear and 60+ House Sparrows. 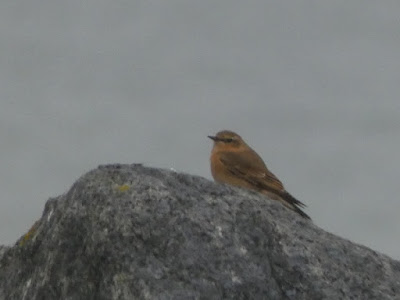 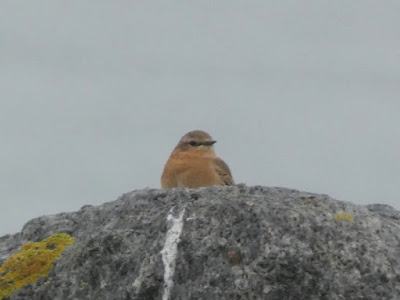 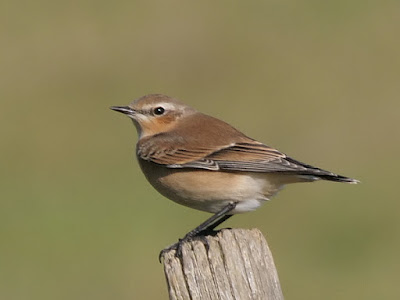 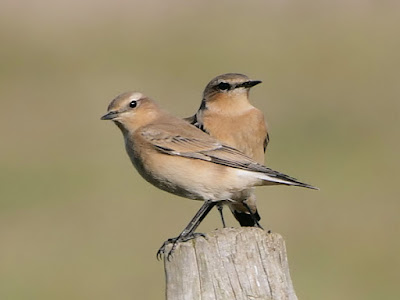 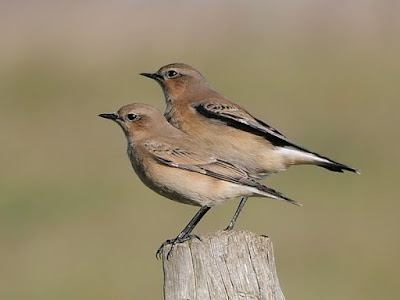 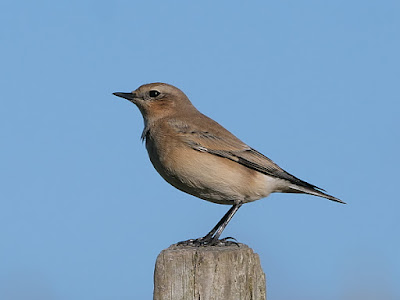 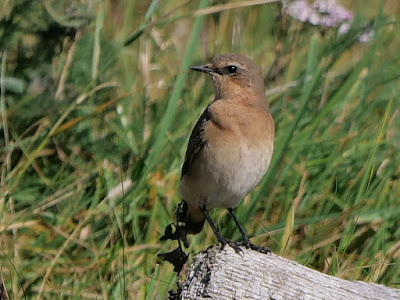 Thursday 23 September. I made and early visit to Mill Hill, being joined later by Megan and Cookie. I saw Sparrowhawk, 4 Buzzards, Great Spotted Woodpecker, 2 Kestrels, 2 Jays, 13 Swallows (with another 70 either this species or House Martins or a mixture, they were not close), 7 Chiffchaffs, an impressive 28 Blackcaps, a Lesser and 2 Common Whitethroats, Spotted Flycatcher, 13 Meadow Pipits and just 4 Goldfinches. 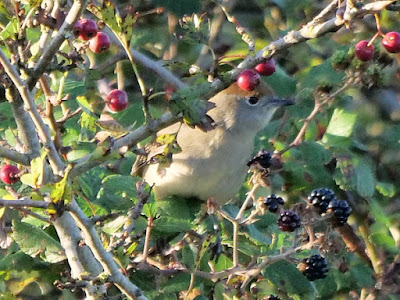 Wednesday 22 September. Megan and I took Cookie to Lancing Ring and Steepdown where I saw 2 Buzzards, 3 Great Spotted Woodpeckers, 80 Swallows, a Sand and 60 House Martins, 2 Chiffchaffs, a Whitethroat, 7 Stonechats, 2 Wheatears, 7 Meadow Pipits and 6 Corn and a Reed Bunting (the latter my first of the autumn). 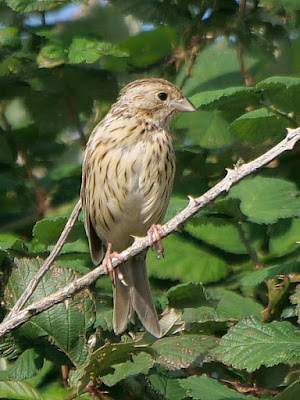 Posted by richard fairbank at 15:58 No comments:

Tuesday 21 September. I took Cookie up to Beeding Hill and we walked our usual circuit, partly in low cloud which didn't fully clear until we were leaving Truleigh Hill for the final leg. I recorded 2 Sparrowhawks, 2 Buzzards, Green Woodpecker, 2 Kestrels, Peregrine, Raven, 4 Skylarks, 30 Swallows, 5 House Martins, 8 Chiffchaffs, Blackcap, Lesser Whitethroat, Spotted Flycatcher, Redstart, 2 Stonechats, 6 Wheatears, 170 Meadow Pipits and 30 Goldfinches. A nice selection of migrants although fewer, at least in terms of numbers, than on my previous visit. Nessa was returning to London so I combined dropping her at Shoreham Station with taking Cookie for a late afternoon walk down the river over the Rec and back by the airport. I saw 8 Oystercatchers, 11 Lapwings, 3 Bar-tailed Godwits (two N of the railway and the other by the houseboats), 14 Redshank, 6 Grey Herons, 8 Little Egrets, Sparrowhawk, 4 House Martins, a Wheatear, 24 Pied Wagtails, 4 Meadow Pipits and 8 Linnets. 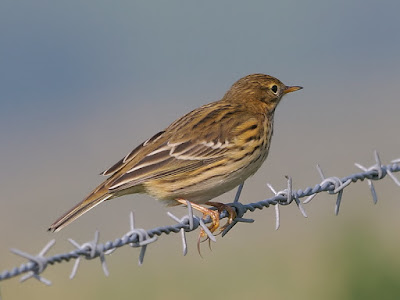 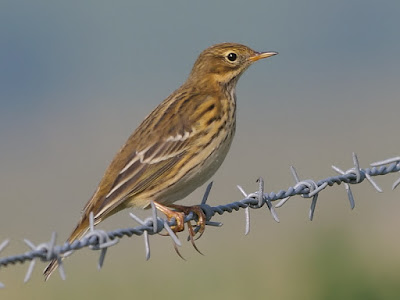 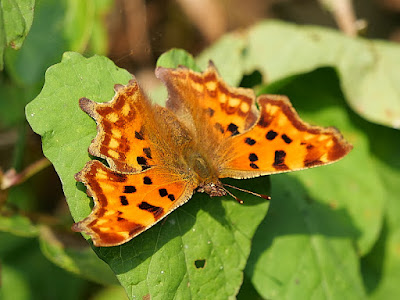 Monday 20 September. Mill Hill was very autumnal in a cold NNW wind and I was pleased to have a fleece in the car. I wandered about for just over 90 minutes before being joined at 09:00 by Megan and Cookie. By then it had warmed up a bit, but not enough to take off my gloves, and the sun even came out briefly. We walked around for another 90 minutes although bird activity had dropped right off. On/over Mill Hill I saw 3 Stock Doves, Buzzard, Sparrowhawk, 60 Swallows, 70 House Martins, 9 Chiffchaff, 15 Blackcaps, 3 Whitethroats, 2 Mistle Thrushes, 12 Meadow Pipits, 7 Linnets and 9 Goldfinches. Plans to cycle down to the Adur Saltings for high tide didn't quite work out as planned. I was late leaving and then discovered my front tyre was completely flat. Pumping it up revealed a major puncture so, with time against me, I transferred to my old bike. It is a bit wobbly these days, but I forgive it having clocked up 45,000 miles of commuting without too much trouble. I arrived at the RSPB viewpoint with the tide higher than I'd hoped, few waders in evidence and into the sun. It was then I realised that my light tripod was still attached to the bike I'd left behind. Hand holding a scope and looking into the sun was not ideal but I did see a Bar-tailed Godwit, Greenshank, 27 Redshanks, 18 Little Egrets and 4 Grey Herons. Back home three attempts to repair the puncture failed and I accepted defeat and fitted a new inner tube. I also switched the new bikes front tyre for old bikes rear which I replaced with a used spare. Both bikes now have matching front and back tyres. I can't remember why they ended up not matching, probably due to the spares I had at the time. Late afternoon, with the tide falling, I took Cookie to the Adur to look for waders opposite the airport. We saw 10 Ringed Plover, 2 Bar-tailed Godwits, 6 Dunlin, 40 Great and 2 Lesser Black-backed Gulls and 6 Little Egrets. 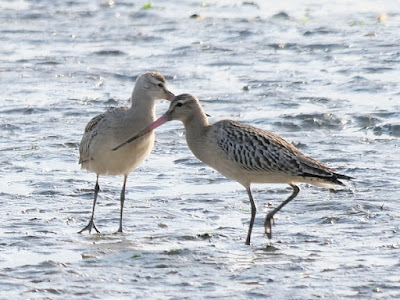 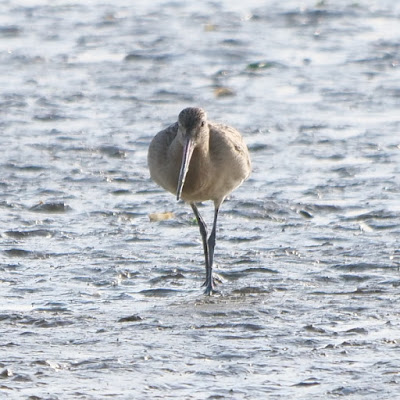 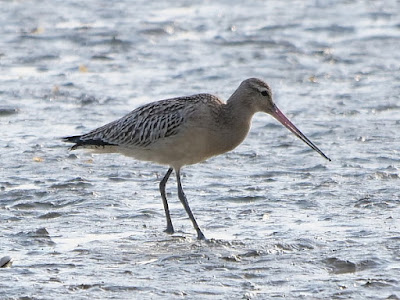 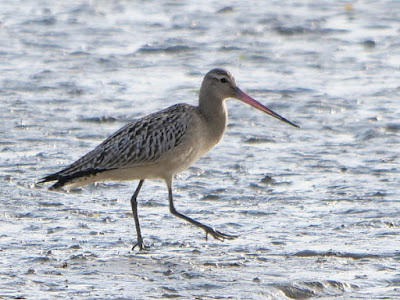 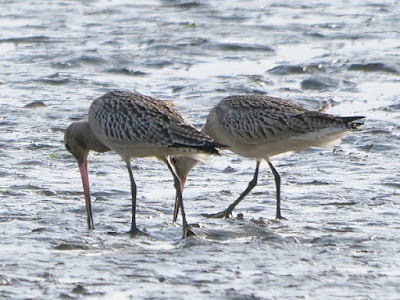 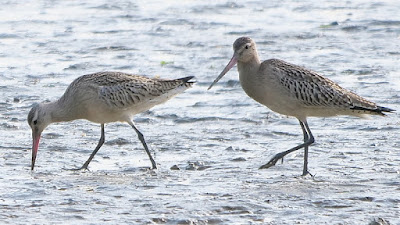 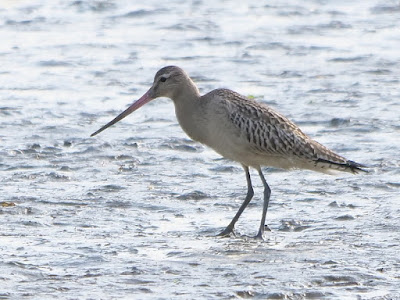 Sunday 19 September. Another late start with Megan, Nessa and Cookie. We walked from Harbour Way to the Adur Ferry Bridge and back along the boardwalk to the Fort. Expectedly quiet with a Rock Pipit the highlight. Also 18 Turnstone roosting on the inner jetty and a first-winter Mediterranean Gull west.

Saturday 18 September. After a late start Megan, Nessa, Cookie and I went up to Mill Hill. It soon warmed up with most passage having probably already petered out. I saw 3 Buzzards, 2 Kestrels, a Jay, 15 Swallows, a singing Chiffchaff, 6 Blackcaps, 2 Whitethroats, a Whinchat, Meadow Pipit, 2 Linnets and 4 Goldfinches. Butterflies included a Clouded Yellow and the Autumn Ladies Tresses were all but over. 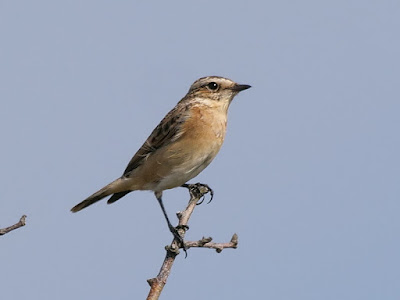 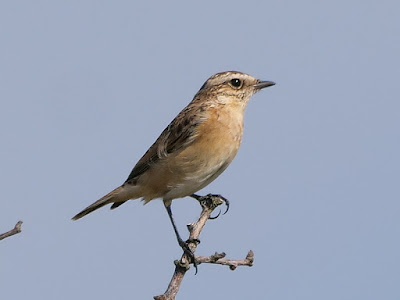 Friday 17 September. Cookie and I met David Buckingham at the Beeding Hill car park and walked SE towards Thundersbarrow, N to Truleigh Hill and back skirting Room Bottom and the quarry - the usual triangle. I saw Buzzard, Great Spotted Woodpecker, 4 Kestrels, 3 or 4 Peregrines, 2 Ravens, over 500 hirundines, 21 Chiffchaffs, a Blackcap, 2 Whitethroats, 2 Redstarts, 2 Stonechats, 2 Whinchats, 24 Wheatears and 130 Meadow Pipits but only 40 Goldfinches. I also heard a Yellow Wagtail (DB saw it and heard others). The hirundines were mostly Swallows with at least 30 House Martins and a Sand Martin identified amongst them. Not  a bad return for a local walk.

Posted by richard fairbank at 15:21 No comments: