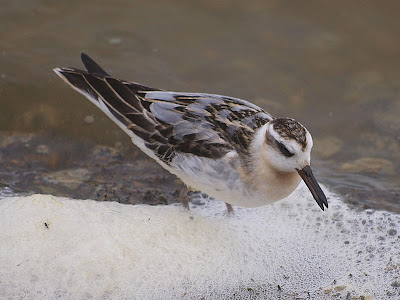 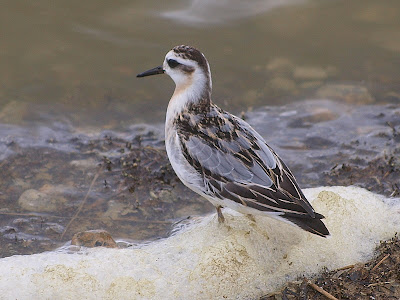 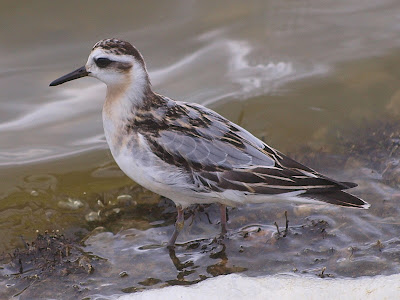 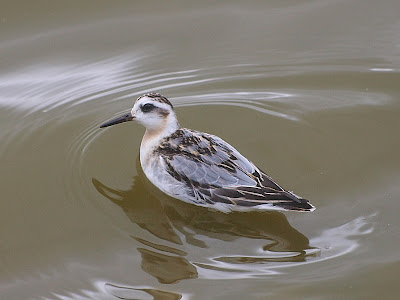 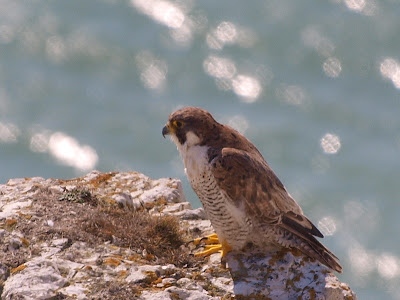 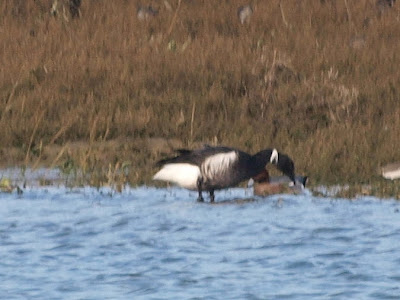 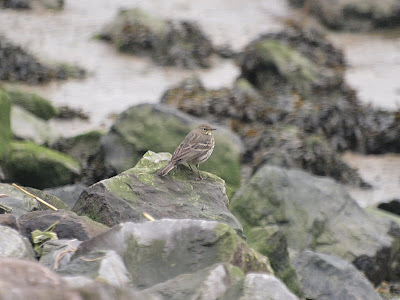 Posted by richard fairbank at 13:34 No comments:

This blog covers the second half of a family holiday to Namibia in summer 2008. It is based on scant notebook entries and unreliable memories but it was a very enjoyable trip. The accompanying photographs were taken, some by Josh, Nessa and Megan, on print film using a couple of old Pentax cameras. The prints were not very good to start with and have not been improved by scanning.

Wednesday 30 July. I was up just before dawn and walking down the entrance road hoping to hear a Hartlaub's Francolin. Soon one started calling from the nearby hills and I saw it on a boulder just below the ridge. After breakfast Megan, Nessa and Josh went on a nature walk seeing Klipspringer while I returned down the entrance road seeing, as I had hoped I would, White-tailed Shrike and Rockrunner again. Erongo had been very enjoyable, a level of luxury we could have become used to even if my bank balance wouldn't have survived very long! We reluctantly left and drove back to Omaruru and west along the C36 to Uis. A White-tailed Shrike flew across not far down the road. In Uis we checked into the Brandberg Rest Camp and headed to Brandberg to see the White Lady, a Bushman painting at least 2000 years old. On arrival at the site we employed an obligatory guide to lead us 2-3 kms up the canyon on a well marked trail to the cave.  The White Lady was less obvious than some of the surrounding figures but was worth seeing. 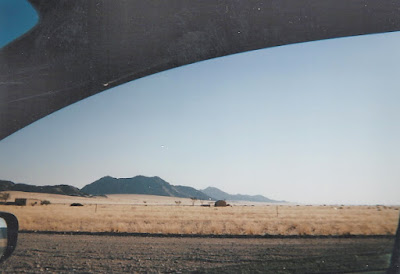 Thursday 31 July.  I was up before dawn and driving back towards Brandberg, retracing the route of the previous evening. Turning off the C35 onto the D2359 I stopped and walked around the grassland north of the road - an excellent site for Benguela Long-billed Lark, I saw 9. On the way back to Uis I stopped in the only wadi with any vegetation and much to my surprise, as my information was somewhat vague, quickly found a responsive pair of Herero Chats. I was back in time for breakfast and after we headed for the coast, seeing 4 Ruppell's Kohraans just outside Uis and 10 Gray's Larks in the Namib Desert halfway to Henties Bay. At the coast we headed north along the coast for 30 miles to the Cape Cross fur seal colony. Arriving in the car park the smell was overpowering, perhaps not surprising as about 5000 Cape Fur Seals were present. We returned along the coast to Swakopmund where we had an apartment at Sea Breeze in Tumalin, a southern suburb of Swakopmund, for three nights. We were almost on the coast and it was quite cold and felt damp. 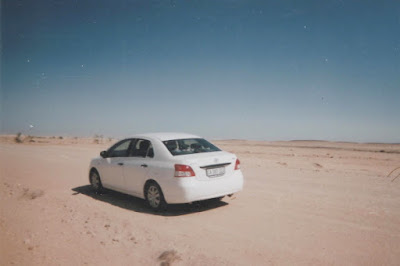 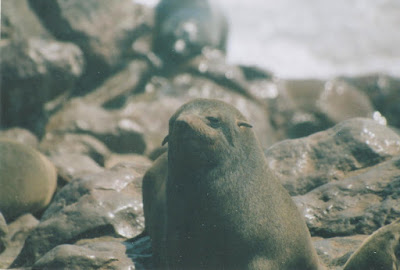 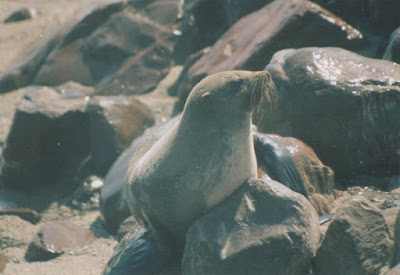 Friday 1st and Saturday 2 August. During our two days in the Swakopmund/Walvis Bay area we went on a Mola Mola dolphin trip (seeing Bottle-nosed and Heaviside Dolphins and a tame Fur Seal called Saddam Hussein), tried Quad Biking around and over sand-dunes (enjoyed more by Nessa and Josh than Megan and me) and visited the aquarium and saltpans (the latter were rather smelly and only appreciated by me). Megan visited the local laundrette while I walked a dried up river bed on the edge of town unsuccessfully looking for Orange River White-eyes. Birds seen in the area included Bank Cormorant, both Flamingos, various waders including African Black Oystercatcher and White-fronted Plovers, Subantarctic Skua, Kelp and Hartlaub's Gulls, Chestnut-vented Tit-Babbler and Bokmakierie. 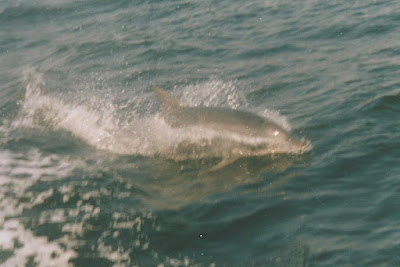 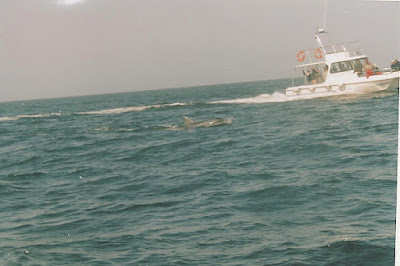 Sunday 3 August. Our longest daily drive of the trip was ahead of us, over 400km southeast to Sessrium mostly on dirt roads. Our return to the Walvis Bay saltpans was hardly out of our way but not very popular. The smell was no better and again it failed to produce the hoped for Damara Tern but did add Chestnut-banded and Kittlitz's Plovers. Heading inland a Tractrac Chat was by the road as were 4 Gray's Larks and 7 Lark-like Buntings while 100 low-flying Bradfield's Swifts were seen just before Solitaire. We filled up with petrol and seeing  a car stopped by us had cable ties around its hub-caps checked ours to find we had lost one. It was probably a fairly likely occurrence on the sometimes rough dirt roads as, when one looked, many cars had ties too. I was particularly annoyed with myself as I had read a report of a trip where a hefty charge had been levied for such a loss and had put some ties in the bottom of my rucksack for that purpose but promptly forgot all about them. We continued south to Sesrium and the Sossusvlei Desert Camp, posh walk-in half adobe half canvas chalets quite bizarrely set down in the middle of nowhere.


Monday 4 August. We left Sesrium as it was starting to get light and drove the short distance to Sesrium gate, the entrance to the National Park. We joined a small queue of visitors waiting to enter at dawn and were soon on our way driving the 60km to Sossusvlei, perhaps the most famous single landmark in Namibia. It was spectacular but birds were not very evident,  Nessa, Josh and I walked up and along the crest of one of the nearby dunes where we had superb views. Megan was uneasy with the steep slopes and tracked our progress around the side. On the drive way back we saw 2 Burchell's Courses at about km50 and a Ruppell's Kohraan at about km30. We stopped at the Sossusvlei lookout and by now it was mid morning and the sun quite hot. It was a site for Dune Lark but I was not very hopeful given the time of day, and Megan, Nessa and Josh waiting in the car restricting the time I could look. I approached the nearest dunes, played a recording and was completely taken by surprise when a pair flew in to see off the intruder. It was my 18th and proved to be my final new bird of the trip and I was back at the car, where the family had been resigned to a long stay, 10-15 minutes later. Brilliant. We made a couple of short stops before leaving the park driving back to Solitaire where we checked into the characterful Country Lodge for our last night in Namibia. In many it was the nicest place we stayed even though Josh thrashed me at table tennis.
Tuesday 5 August. Before and after breakfast walks around Solitaire were superb for Namaqua Sandgrouse with small parties, mostly of 2-6 but five of between 16-30, flying over and some landing in the nearby desert. I counted 189 in total although there could have been some duplication. It was at least 200km back to Windhoek although we did not have to check-in until 16:00. We had plenty of time and might even find a Toyota dealer to buy a replacement hub-cap. There were several different routes, the three shortest went over passes although winter weather could make some of them difficult. The lodge proprietor recommended the 'middle' route over the Gamsberg Pass as currently being the best. It involved heading back towards Walvis Bay for 60km before turning off up to the pass. On the way to the turning Megan spotted what looked like a hub-cap by my side of the road. We stopped and it looked very much like ours. It appeared to have been run over by a big truck and had a split in it but we managed to clean it up and fit it back on. The road up to the pass was quite narrow and as we got higher there were an increasing number of impressive skid marks on it. We were not too concerned until rounding a corner the road dropped down to cross a small stream there was an articulated lorry who's trailer was at an angle blocking it completely. There was no way past and we would now be hard pushed to return to Solitaire and reach Windhoek in time by another route. The driver told us help had been sought from a nearby farm but wasn't sure how long it would be, or what it would be able to do to pull the trailed upright. meanwhile a couple more vehicles arrived behind us and what seemed to be a local 4WD from the other direction. they took one look at the situation, engaged 4WD, crossed the sandy stream at its narrowest point and literally disappeared in a cloud of dust. Up to now all the locals we had encountered had been very friendly and helpful but clearly not all Namibians were. We didn't have 4WD but I felt we could even the track it had created out a bit and get our car across the stream and with no sign of anything else happening we gave it a go. There was one rock in the middle of the river we needed to avoid but we moved gravel and small rocks to fill in some hollows and build the track up a bit.  With help from the lorry driver and the other motorists I managed to drive the car across, with only one anxious moment when the wheels started spinning. we helped the other motorists cross too, were ensured by the lorry driver that there was nothing we could do to help him and much to our relief continued on our way. It had been an anxious time, the one occasion when such a delay could have caused us real problems. it didn't and in the even only added to the adventure of the holiday although sadly we had run out of film that morning and were unable to record the drama. It was fortunately a straight run back to Windhoek. We had time to visit a car wash before dropping the car off, the split hub-cap was not noticed or commented upon.  Our flight was on time and we were back at Gatwick early the following morning. It had been the memorable holiday we had hoped it would be, with plenty of iconic animals, almost all the birds I had hoped for, very impressive scenery and enjoyable activities. A perfect destination ...
[blogged April 2016]
Posted by richard fairbank at 13:12 No comments: