Wednesday 31 August. I arrived at Birling at 06:10 and was soon joined by John and Doreen Cooper. We birded to Shooter's Bottom where a film crew were present, allegedly with Jeremy Clarkson, seeing RKH, RK, GG and others there or on the way. I continued on to the rides above Whitbread Hollow and back to Birling with a detouring towards Bullock Hill. I also looked at Crowlink village which was very quiet. Birds seen were Wryneck (Shooter's Bottom), 12 Sand Martins, 600 Swallows, 25 House Martins, 33 Yellow Wagtails, 4 Redstarts, 6 Whinchats, 8 Wheatears, a Grasshopper, 2 Reed and 2 Sedge Warblers, 3 Lesser and 34 Common Whitethroats, 22 Willow Warblers 2 Pied (Birling and Hotel garden) and 5 Spotted Flycatchers and 2 Corn Buntings. A very enjoyable 9 hours before visiting my dad who was in good spirits.
Tuesday 30 August. Six Swallows flew over Southwick Beach as I was cycling to work.

Monday 29 August. A morning walk at Wolstenbury with Megan and Vanessa. Superb views but few birds with two noisy Ravens best. Late afternoon I visited Pulborough seeing 120 Teal, Little Stint, Greenshank and 3 Green Sandpipers but not the Wood Sandpiper seen in the morning.


Sunday 28 August. A morning on the eastern side of Pagham Harbour were 5 Little Stints, 9 Spotted Redshank, 12 Greenshank and a Yellow Wagtail were on the Breech Pool. Three Curlew Sandpipers were in White's Creek on the falling tide and a walk to the sea to see the 'new' harbour entrance was interesting. A Wheatear on the beach was the only migrant seen all morning.

Saturday 27 August. I met JK in the car park at Birling at 06:10 and we covered the main sites up to the hotel garden, mostly in the company of JFC and DRC. I was a little concerned as I had to leave at 11:00 to be back in Shoreham for a family commitment but it was rather quiet and I was ready to leave by then. I saw 40 Sand Martins, 300= Swallows, a single House Martin, 3 Yellow Wagtails, 4 Whinchats, 4 Wheatears, Sedge Warbler, Lesser Whitethroat, 13 Whitethroats and 24 Willow Warblers and a Raven.  That is until we were about to return to Birling in JKs car and were stopped by a German tourist asking about parking restrictions. This delayed us to 10:39, just long enough to see an Osprey flying east towards us - the first decent bird picked up with my new specs. It flew closer then headed off south over the cliff edge. Nice. Conveniently the family do was at Shoreham Airport (none of this Brighton City Airport for me!) allowing me to look at the Adur where there was a Greenshank, 21 Ringed Plover, 5 Dunlin and 700 Herring Gulls. The latter included locally (Southwick) colour-ringed A6XY which I had seen on the Adur four times during 2010-13 but not since. 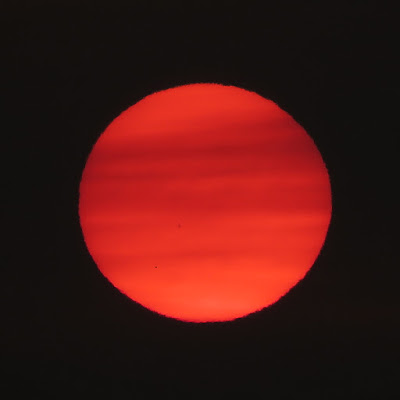 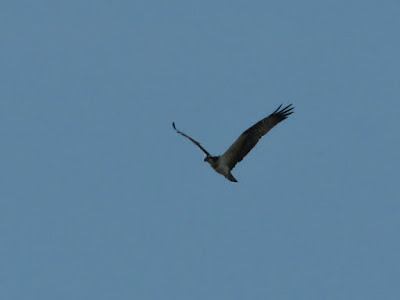 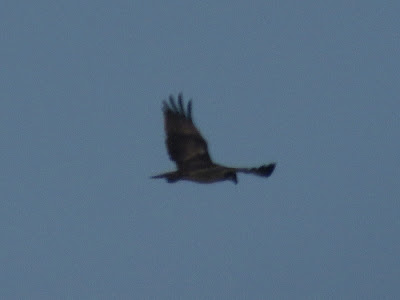 Friday 26 August. A couple of hours wandering around Mill Hill before breakfast was memorable mainly for a flock of 23 Yellow Wagtails flying around sheep in the 'trig point' field. Otherwise I saw 2 Reed, single Garden and Willow Warblers and 7 Whitethroats. Later, at low tide, Megan and I walked along the Adur seeing 25 Ringed Plover, 8 Dunlin and a North Thames colour-ringed Herring Gull. The latter too distant to read without a telescope which I had left at home. I then cycled to Worthing to collect my new specs seeing a Wheatear at Widewater on the way and 105 Ringed Plover and 9 Dunlin on the beach my return.
Posted by richard fairbank at 18:07 No comments: 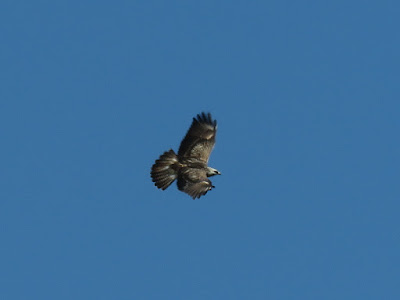 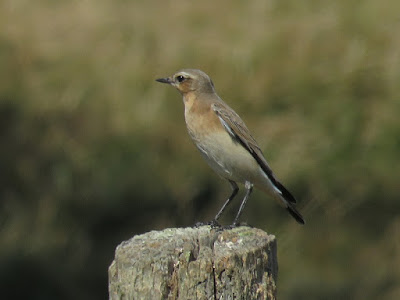 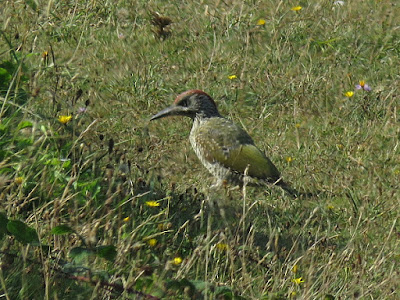 Sunday 21 August. A very quiet walk around Mill Hill where the only migrants seen were 3 Swallows, a Whitethroat and 3 Willow Warblers.

Posted by richard fairbank at 20:04 No comments:

Saturday 20 August. An hours seawatching from Widewater produced about 30 Gannets (mainly heading west) and single Fulmar and Swift heading east, the latter more blown than flying. No shearwaters but perhaps the wind wasn't onshore enough? Megan had to be in Chichester for the afternoon so we walked around Church Norton first seeing a Spotted Flycatcher by the churchyard, 2 Grey Plover and 3 Knot in the harbour and at least 55 Mediterranean Gulls behind the first Several (there were probably twice that many in the flock but over half were hidden from view). I dropped Megan in Chichester and went on to Thorney walking down the western seawall to the Great Deep. I saw a Whinchat and 2 Wheatears but despite a very high tide there were only roosting Oystercatchers visible. that is until the osprey put in an appearance flying around from 15:00-15:25 and flushing 9 Greenshank my way. Also present were 7 Common Sandpipers and 11 Sand Martins. I returned to the main road and walked down to the gate opposite The Stable where the Osprey was sitting distantly in front of the landing lights. Also at least 3 Spotted Redshank with the distant Redshank visible from there. I then had to leave to collect Megan but it had been a worthwhile visit to a reliable autumn Osprey site. 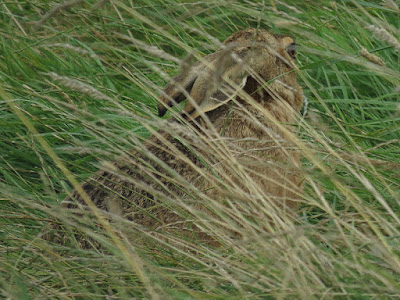 Friday 19 August. Green Woodpecker, 3 Whitethroats, 3 Willow Warblers and a Chiffchaff were all I saw on Mill Hill before breakfast. Megan and I then walked from Chantry Hill to Rackham Hill and back. It was breezy and visibility was at times poor. We saw at least 3 Ravens, a pair making it clear ot a red Kite who was king of the castle, the castle being a large stack of hay bales. Also 3 Whitethroats, 4 Willow Warblers, 4 Yellowhammers and a Corn Bunting. An evening visit to the Adur for low tide produced 65 Ringed Plovers and 11 Dunlin but few gulls.

Posted by richard fairbank at 20:08 No comments:

Wednesday 17 August. Mill Hill before breakfast produced Whinchat, Wheatear, 3 Reed Warblers, 11 Whitethroats and 9 Willow Warblers. Later 4 Sandwich Terns east at Widewater while paddling with Megan. We then tried 5 km synchronised bicycle pushing in case it became an Olympic event - I'd chained our bikes together on the beach and forgotten the key! After tea on the Adur at low tide 29 Ringed Plover and 4 Dunlin but very few gulls.
Sunday 14 August. Megan and I walked around Cissbury seeing a Tree Pipit fly over, Spotted Flycatcher and Peregrine but only single Whitethroat and Willow Warbler.
Posted by richard fairbank at 19:59 No comments: