Nick Preston and I had wanted to see Kagu on New Caledonia for many years.  The prospect of being able to do so came very much to the fore when, in New Zealand in August 1996, we met a French doctor and his girlfriend on holiday from a period of National Service in New Caledonia.  Although not birders, they had seen Kagu by the Grand Kaori tree at Riviere Bleu with ease.  A trip in 1997 was not a possibility but one in 1998 was and we planned it around Kagu, Plains Wanderer (another single species family we had wanted to see for some time) and a good selection of SE Australian species (both of us had been to Queensland before).  John Cooper was soon recruited and he and Nick decided to go to Darwin for a week after I left.  Gary Edwards signed up a month before departure, for the whole trip, giving us a full complement, but disaster struck 4 days before we were due to leave when Nick Preston was taken into hospital.

The following is the first of four blogs providing a personal account of a trip John Cooper, Gary Edwards and I made to Australia and New Caledonia in July and August 1998.  It is illustrated with prints I took with an old Pentax camera and subsequently digitised.  Another account of the trip, including John and Gary's time around Darwin after I left, was published in two parts by John Cooper last year (see http://jfcbirdingtrips.blogspot.co.uk/2013/04/southern-australia-northern-territories.html).

Tuesday 21st July.  John, Gary and I arrived in Sydney mid-morning, an hour late, after what seemed like endless flights.  We picked up a one-way pre-booked hire-car from Hertz, resisting their offer of having a larger car that needed returning to Adelaide for the same price.  We were concerned it would use more fuel.   John drove us straight to Royal National Park where it was dull and showery with the car was making loud and very annoying bumping noises from the rear suspension.  We saw a Beach Thick-knee at Bonnievale that we had learned about from postings to birding-aus and took a short walk down the northern end of Lady Carrrington Drive.  I saw two new birds, Brush Wattlebird and Australian Raven, while 175 Sulphur-crested Cockatoos were impressive.  We drove back to Sydney Airport and changed the car to the larger Ford Station Wagon destined for Adelaide.  After finding a take-away we returned to Royal National Park and camped at Bonnievale, somewhat shattered.  Garry and I had small tents, John preferring to sleep in the car, which given its size was quite comfortable!

Wednesday 22nd July.  We were woken at 01:00 by a Powerful Owl calling from nearby, but it had stopped by the time we’d got out to look for it.  Garry and I packed our tents soon after dawn and we walked the southern section of Lady Carrington Drive until mid-morning.  A Superb Lyrebird displaying at a range of 10-15m was absolutely stunning.  John drove us to Barren Grounds and we walked to the Illawarra Lookout and along the ‘ground parrot’ trail a couple of times with no success.  We had a brief look at Budderoo before returning to the ground parrot trail at Barren Grounds where an obliging Rufous Bristlebird provided some consolation for the lack of Ground Parrots and Emuwrens.  Frustratingly three Yellow-tailed Black Cockatoos flew over in silhouette and at some distance.  We drove into Roberton for a take-away and camped near Budderoo.
Thursday 23rd July.  We returned to Barren Grounds and after seeing a Pilotbird near the entrance we walked the circular trail and the ground parrot trails for most of the morning, another Bristlebird and a pair of Beautiful Firetails being the highlights.  We wandered around Budderoo and flushed a Southern Emuwren which gave good flight views before we returned again to Barren Grounds, spending the rest of the afternoon walking the ground parrot trail another four times.  John flushed a Ground Parrot at the start of the trail when returning early to look for Yellow-tailed Black Cockatoos and came back to tell us.  I ventured into where he had seen it drop but it could not be refound.  Even more frustrating, several Ground Parrots were heard at dusk, though none were close.  We met Milburn as arranged in Roberton and followed him to Wollongong, stopping on the escarpment on the way to try for Sooty Owl.  We turned down the track to park and realised we had stumbled into a police stakeout.  Somewhat unnerved, despite being reassured by the police that it was OK to carry on, we continued and had a pair of Sooty Owls responding to tape, although unfortunately not close enough to spotlight.  Returning up the track we were passed by 3 vehicles, at least one being a police car and near the start of it noticed a number of newish cars that had been dumped down the escarpment, rather spooky in the dark.  We continued to Wollongong where we spent the night with Lindsay & Janice Smith.  Despite being given a bed I did not sleep well in anticipation of a pelagic the following morning with Lindsay and Milburn.
Friday 24th July.  We left Wollongong on the Sandra K soon after first light and returned late afternoon ahead of a band of rain.  The sea was quite rough and there was sufficient swell to make the movement of the boat very unpleasant at times.  It was the closest I have ever come to being sea-sick and I found it a real effort not to succumb, as did John. Gary was not so fortunate being ill on occasion, his first time.  Around some trawlers we found over 150 albatrosses (mostly Yellow-nosed and Black-browed but also Shy and Wandering) but comparatively few were attracted to our chum and Milburn and Lindsay caught and ringed very few.  A very smart White-faced Storm Petrel spent some time with us and we saw 10 Solander’s and 2 Cape Petrels but the lack of variety was a bit disappointing, although it was not helped by our failure to pick out any differences in prions (we only identified Fairy) or our more traditional approach to Wandering Albatross forms (and inability to differentiate between them). A nice group of uncontroversial Sooty Oystercatchers greeted our return to Wollongong and after an excellent meal at Lindsay’s we said our goodbyes and drove north to Dhurag National Park where we camped. 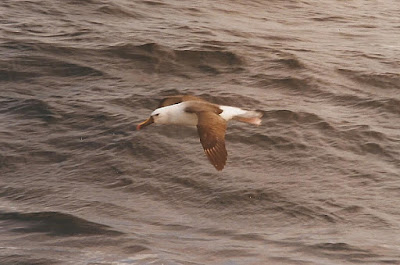 Saturday 25th July.  After a quick look around the camp site and nearby picnic area (which failed to produce the hoped for Glossy Black Cockatoo) we walked the Old North Road seeing an excellent Spotted Quail Thrush on the way up and a pair of Origmas on our return.  We drove to Mitchell Park, seeing an impressive pair of Yellow-tailed Black Cockatoos on the way, but failing to find a Powerful Owl in a couple of hours of searching.  We continued to Londonderry, where a quick stop produced excellent views of a flock of 120 Swift Parrots between heavy showers.  We slowly drove west reaching Bathurst by dusk and continued to Wallendbeen where we camped near the road.

Sunday 26th July.  We were up at dawn to witness a movement of 150 aptly named Noisy Friarbirds moving north through the line of trees by our campsite.  We took the tents down and slowly drove along route 94 to Tenora and then on to Leeton, stopping when birds were seen from the car.  We saw a pair of Banded Lapwings, 50 Bluebonnets, 100 Red-rumped Parrots, Red-capped Robin, Brown-headed and Spiny-cheeked Honeyeaters, 200 Magpie Larks, 75 White-winged Chough, 60 Apostlebirds and 100 Little Ravens.  At Leeton Swamp we had to settle for distant views of most of the waterbirds as we failed to find a way of approaching them despite getting wet feet.  They included Yellow-billed Spoonbill, Australian Shelduck and Shoveler and 40 Red-necked Avocets.  I also had a frustrating view of a small crake as it dropped into a patch of reeds.  We continued on to Deniliquin, arriving just before dark, and camped in town at a site near the river.  We made contact with Phil Maher to arrange a meet for the next morning although he sounded a little concerned about the weather as it was now raining and the area we would be visiting to look for Plains Wanderers the next evening might be difficult to access.

Monday 27th July.  Phil arrived at 07.30 and immediately took us to see Superb Parrot.  They were found relatively easily and more than lived up to their name, but the wind soon picked up with showers making birding a struggle, although a Stubble Quail was flushed twice in this area.  A walk through an area of dying woodland produced excellent views of Flame and Red-capped Robins, Yellow, Yellow-rumped and Chestnut-rumped Thornbills and a few wetland birds were found including Hoary-headed Grebe, Pink-eared Duck and Black-tailed Nativehen although the time of year was wrong for others.  Phil dropped us off at lunch time with sombre words about the weather and the possibility of not being able to get into the area for Plains Wanderer.  Tension mounted as the drizzle persisted and we set out again mid-afternoon to try our luck.  A pair of Bush Thick-knees, in an area they’d deserted 18 months before, was a good start and an angry Owlet-Nightjar, enticed out of its hole by the tapping of a stick on the trunk, was even better.  We also saw Long-billed Corella, Malle Ringneck before Phil decided to try and get into the Plains Wanderer area before dark, being particularly concerned about a couple of creek crossings that were required, and with increasing anxiety we entered the property and started to drive across an enormous grassy field.  No more than half way across the field, and much to our amazement and great relief, we disturbed a female Plains Wanderer.  A very strange bird and not at all as we’d expected - its horizontal, belly on the ground, carriage with large protruding feet made it look like a cross between a small tinamou and a young duckling as it scurried away, occasionally attempting to hide under small tufts of grass.  We watched it for several minutes before leaving it and then waited until dark.  Spotlighting in the same field for an hour or so produced 2 male Plains Wanderers in the upright (frozen) stance we were expecting.  A Stubble Quail was also spotlighted but no Button-Quail (wrong time of year again), although having seen Plains Wanderers so well we were not too bothered.  Phil later admitted he’d thought we might break his 3 year run of successes in finding the species; we were very glad we hadn’t.
[blogged December 2015]
Posted by richard fairbank at 09:41 No comments: