In 1987 I met the late, greatly missed, Bruce Forrester on Scilly and we got talking about Brazil where he had been several times and was producing a very helpful site guide.  He gave me some excellent information and Nick Preston and I decided to visit in summer 1988 despite the lack of a decent field guide and the Portuguese language being a potential problem.  Bruce was returning to Brazil at the same time and we arranged to meet up with him and others for a few days while we were there.  This blog is put together from hazy recollections and inadequate notebook entries along with scanned slides of variable quality.  Hopefully it gives a flavour of the trip.  Despite no Andes the areas of Brazil that we visited were much more impressive scenically than I’d anticipated, the language less of a problem -not that we understood a word of it - and the people friendlier.

We got tickets with Varig through Journey Latin America who also spent a lot of time booking internal flights for us on a three-week airpass which started after our first week was spent in driving distance of Rio.  We left Heathrow on 22 July on the overnight flight to Rio via Lisbon.

23 July.  We arrived in Rio de Janeiro at 6am.  Unexpectedly there was no Cambio at the airport, just lots of money-changers hanging around rather dubiously outside.  We changed money behind a pillar outside the airport and would have been easy marks for a dishonest money changer given that both old and new cruzieros appeared to be in circulation with the latter worth 1000x more.  We hired smallest car available and headed to Serra dos Orgaos, near Teresopolis, an easy drive to start with as we didn’t need to go into Rio to get there.  We arrive mid morning and spent the rest of day in the North Section of the National Park, staying in a hotel nearby.  Birds seen included Swallow-tailed Manakin, Giant and Large-tailed Antshrikes, White-shouldered Fire-eye and Drab-breasted Pigmy-Tyrant. 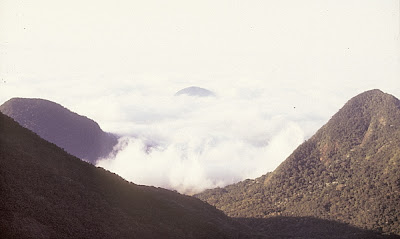 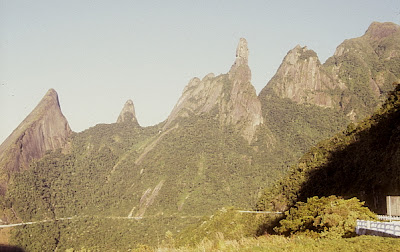 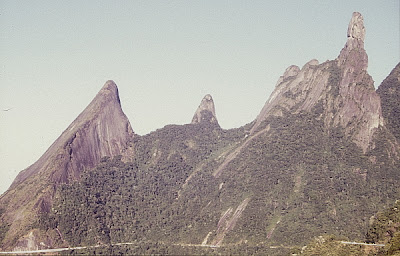 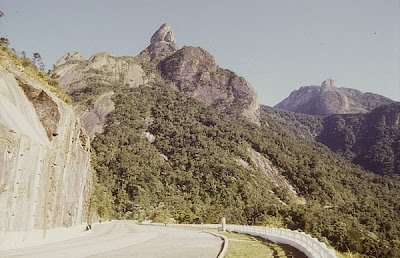 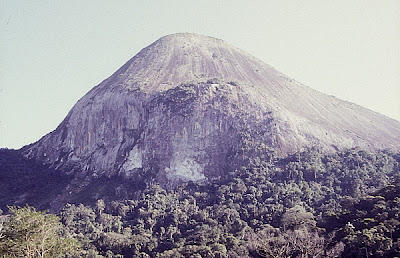 24 July.  We spent most of the day in the South Section of Serra dos Orgaos seeing White-barred Piculet, Blod-crested Woodpecker, Sharp-tailed Streamcreeper, Spot-breasted Antvireo, Star-throated Antwren, Black-cheeked Gnateater (superb), Bare-throated Bellbird, Swallow-tailed Manakin, White-throated Spadebill and Red-necked Tanager.  Leaving Orgaos late afternoon we drove through Rio and south to Itatiaia were we arrived after dark  We readily found a hotel in town just outside the entrance to the National Park.

25 July.  We entered the park at dawn and spent all day on the Maromba Bridge Trail, walking up to the zig-zags and back.  We returned to Hotel Uhu at dusk.  Birds seen included Reddish-bellied Parakeet, Robust Woodpecker, Scaled Woodcreeper, Sharp-billed Treehunter, Rufous-backed Antwren, Swallow-tailed Manakin, Shear-tailed Grey-Tyrant, Yellow-lored and Ochre-faced Tody-Flycatchers, Brassy-breasted, Diademed, Ruby-crowned and Rufous-headed Tanagers and Black-throated Grosbeak. 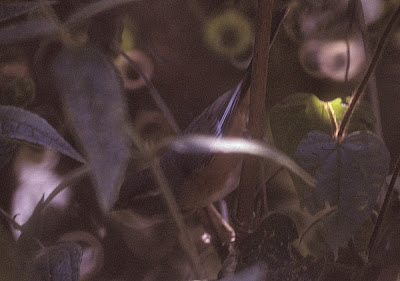 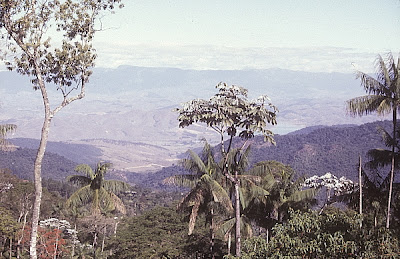 27 July.  We set off to visit the upper section of the park, reached by driving around to Eng Passos and entering from the far side.  We started off in a dry valley 6km NW of Eng Passos but I soon realised I’d left my moneybelt under my pillow in the hotel, I was sure it would be OK, or if not that returning would be too late, but it was playing heavily on my mind so we returned to the hotel anyway.  There it was waiting for me and feeling quite relieved we then spent the rest of the day on the Tres Picos Trail.  Birds seen included Ash-throated Crake, Surucua Trogon, White-eared Puffbird (brilliant), Rufous Hornero, Ferruginous, Rufous-tailed and Ochre-rumped Antbirds, Rufous Gnateater (also brilliant), Wied’s Tyrant-Manakin, Swallow-tailed and Black-capped Manakins, Streamer-tailed and Yellow-browed Tyrants, Golden-winged Cacique, Chestnut-bellied Euphonia, Guilt-edged and Olive-Green Tanagers and Ultramarine Grosbeak.  Another superb day despite my moneybelt scare. 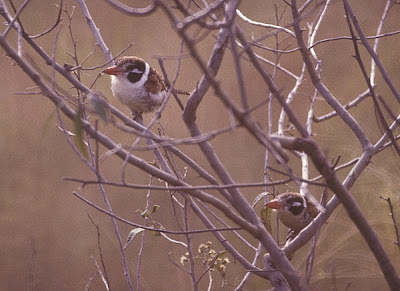 28 July.  We set off again to visit the upper section of the park but this time I made sure I had my moneybelt!  We concentrated on the top road which was mainly open moorland with isolated forest patches and gulleys.  Birds seen included Brown Tinamou, White-vented Violetear, Campo Flicker, Itatiaia Spinetail, Sharp-tailed Streamcreeper, Rufous-tailed Antthrush, Rufous Gnateater, Thick-billed Saltator, Bay-breasted Warbling-Finch and Great Pampa Finch.  Returned to Hotel Uhu after another long day. 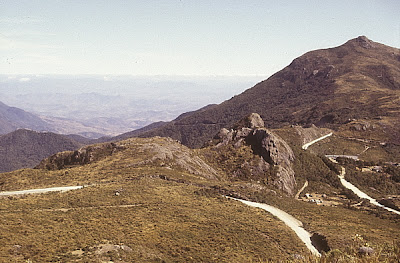 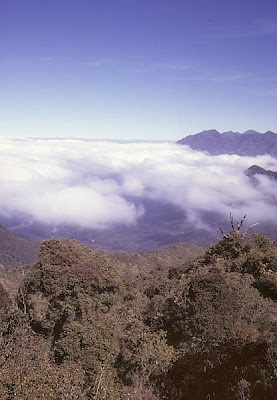 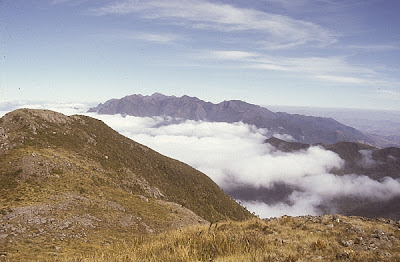 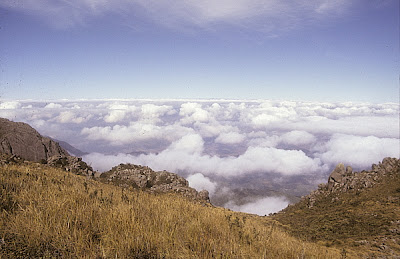 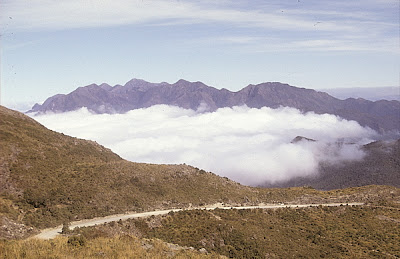 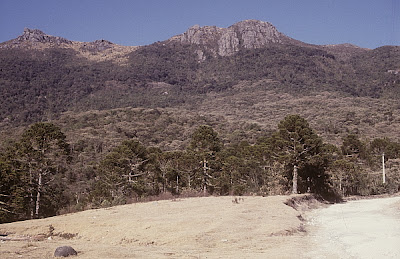 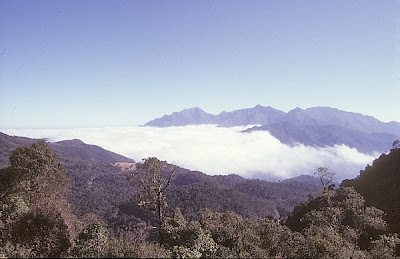 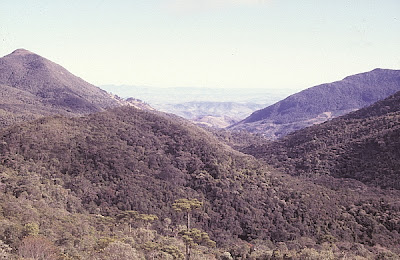 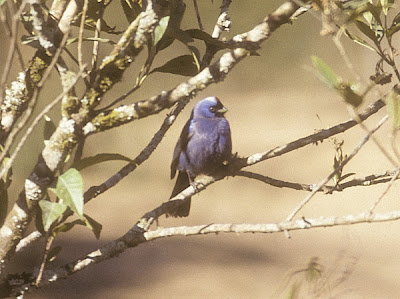 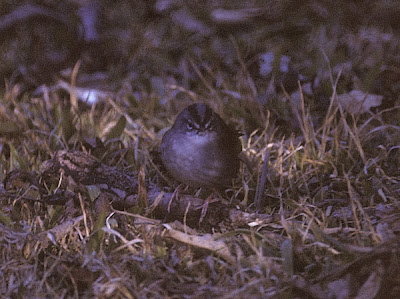 29 July.  Our last day at Itatiaia and we concentrated on the Maromba Waterfall and Hotel Simon Trails. The Waterfall Trail was particularly good producing a superb Variegated Antpitta and 4 Rufous Gnateaters.  We also saw Rufous-capped Motmot, Black-capped Foliage-Gleaner, Sharp-tailed Streamcreeper, Star-throated Antwren, Rufous-tailed Antthrush and Green-headed Tanager.  On the drive back to Rio we were flagged down by a lone traffic cop.  He searched the car and seeing we were tourists refused to accept my International Driving Licence.  I suspect he couldn’t read it properly, despite my having deliberately got the variant required for Brazil which had a Portuguese page in it.  He was insistent that we should have had a box on it ticked so after another 10 minutes of playing dumb (easy to do with no common language) I reached into my top pocket.  His piggy eyes were clearly expecting a bribe so when I produced a pencil and offered to tick the box he almost had a seizure.  A bit more playing dumb and he got the message, or his shift was coming to an end, and with rather bad grace he let us go.  We later heard it was a known route for shaking down tourists heading back to Rio to catch a flight.  We were fortunate that time was on our side as ours didn’t leave until the next morning.  Once back at the airport we returned the car and found a quiet lounge to sleep in. Our first week in Brazil had produced 100 new birds for me. 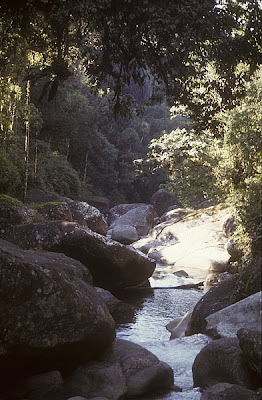 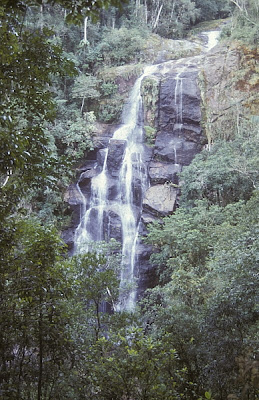 Posted by richard fairbank at 14:38 No comments: