Introduction. It looked as if I would be at a loose end in Autumn 2016. Nick was going to Tanzania with Birdquest (not something that I could afford and not high on my priority of list of places to go, although as always it sounded more appealing after he’d been!) and Jon didn’t have any plans. I was keen to see Yellow-headed Picathartes and late autumn in Ghana seemed a good time and place to do so. Those I knew had either been or were unavailable so I looked into tours. Zoothera appeared to provide the best option, a comprehensive tour at a just about affordable price with a room-share. The tour was likely to have more participants that I was used to or would be comfortable with, especially for forest birding, but life a series of compromises and I hoped to be able to wander off on my own on occasion. That proved to be the case, the group (8 plus leader Nick) were all keen and most with sharper eyesight than me (not hard these days). Although I would have preferred to be with a small group of friends I had no regrets in choosing Zoothera and would do so again under similar circumstances. The official account of the trip, with much better photos, is at http://zootherabirding.blogspot.co.uk/2016/11/ghana-winneba-lagoon-to-kakum-np.html

Sunday 23 October. Megan dropped me at Shoreham station and the London train was on time, via Littlehampton due to engineering works. We had to change at Gatwick due to an incident in one of the carriages arriving at Victoria 15 minutes late. The only Snowdog-not-by-the-sea was between the Brighton platforms and the main concourse, not one of the better ones. I soon caught a tube to Heathrow where I met Anthony and leader Nick. As Anthony and I tried to check in we were told the plane had fewer seats than expected and there were likely to be none left for us. Nick intervened and after an anxious wait we were issued with boarding passes. I would have been a lot more concerned if our first day had involved serious birding.  I met Robin & Susie and Chris & Gail in the departure lounge. The flight was late departing and we arrived at 20:15, an hour ahead of UK. John, who I was to be sharing with, joined us at the conveyor belt where it took ages for our bags to appear, surprisingly my rucksack was not the last – it often is. We were met by our Ashanti guide Paul and taken in a small coach to the Erata Hotel, 10-15 minutes away. We had a snack meal but despite being tired it took me two hours to get to sleep due to toothache, a crown fitted two weeks earlier had been playing up.

Monday 24 October. Breakfast was at 05:30 when we met Ron who had arrived from Brisbane via Dubai before us. We left hotel at 06:00 and drove for just over 2 hours through Accra and its western suburbs to Winneba Beach. There was a selection of common waders there and I found a near adult Laughing Gull, possibly a first for Ghana, although the tide was very high making the few birds present rather distant and not very photogenic. We departed at 09:45 and drove for two hours to Cape Coast where we had an early buffet lunch overlooking the sea. We left an hour later for the shorter drive to the inappropriately named Rainforest Lodge – none was anywhere nearby although the lodge was perfectly adequate. It was very hot and we were not scheduled to depart before 15:30 so I wandered around outside the hotel seeing a Simple Leaflove, my first new bird in Ghana. It was a half hour drive to the Abrafo farmbush where we birded the road through thick secondary forest until dusk. Birds seen included African Cuckoo-Hawk, Black Bee-eater, Melancholy Woodpecker, Vanga and Ussher’s Flycatchers and a superb Buff-throated Sunbird although the best was saved until after dark when Paul taped in an Akun Eagle Owl. 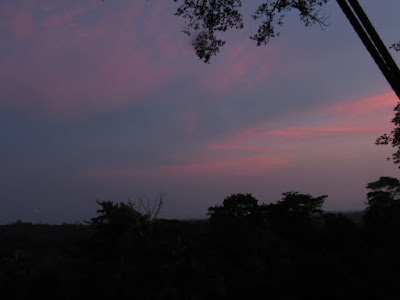 Wednesday 26 October. Breakfast at 05:00, we left hotel at 05:30, driving to Abrafo farmbush. Poor habitat compared to the walkway in which we tried unsuccessfully for a few things. Failing to see a Red-cheeked Wattle-eye was an early downer (one of my main target birds for the trip) and rather put me off the area and while I felt Paul’s taping was more than speculative our success rate almost suggested otherwise. The main exception was a superb White-spotted Flufftail that came in and gave excellent views despite a bit of noise/movement within the group which was generally excellent in this respect. Some of us also had just about acceptable views of Lowland Sooty Boubou – at least there were no features I missed on my view. A smart Cassin's Hawk Eagle flew over We drove on to a nearby river where Rock Pratincole and White-throated Blue Swallow were soon found. We returned for lunch at 13:30 and with an hour and a half before we were due to leave I walked down the road behind the lodge. It was hot with little shade although a brief heavy shower kept birds active, a Red-bellied Paradise Flycatcher being my best sighting. We left at 15:30 and tried another area of farmbush. Lots of birds but little of any interest although Cassin’s Hawk Eagle, Black Sparrowhawk and Yellow-billed Turaco were nice. On the way back we made another unsuccessful Fraser’s Eagle Owl attempt. Overall a disappointing day that probably felt worse than it really was although the brief view of Lowland Sooty Boubou was my only new bird. 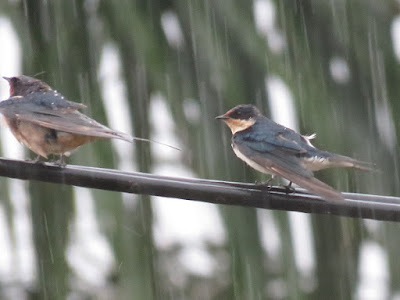 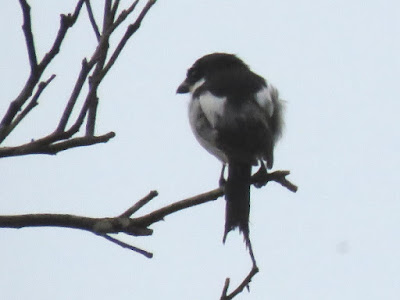 Thursday 27 October. Breakfast at 05:00, left hotel at 05:30, driving to a more forested area of farmbush at Abrafo. This was much better with good views of a intermittently displaying Rufous-sided Broadbill, Green Turaco and Chocolate-backed Kingfisher. We were headinng towards one of the trips and my main targets, the Rosy Bee-eater and crossing a rise walked down into a more open area dominated by a single large open tree. it was full of Rosy Bee-eaters. About 45 were present, a little distant but great through the scope. most of the birds in the tree were juveniles (lacking tail streamers) and adults came in to feed them. They are non-breeding visitors to Ghana and had arrived (early) three weeks ago. Interesting that the yound birds were still reliant on their parents on reaching thieir wintering quarters and so presumably had been while migrating from Nigeria. By a flooded forested pool on the way back to the lodge we saw rather photgenic African Pygmy and Blue-breasted Kingfishers from the bus, although the light was poor.  We returned to the hotel at 12:00 where I skipped lunch to walk down the road again. It was very hot and not as productive as previously. I returned at 13:15 and we left at 13:30 to drive to the Brenu Coast Road where we birded to 17:00 seeing a good range of species including African Hobby, Grey Kestrel, Lanner, Marsh Tchagra, sereral of the commoner waxbills and Wilson's Indigobird. We then drove on to Sekondi and the rather basic but perfectly adequate D&A Guesthouse seeing several hundred thousand swallows roosting in what appeared to be reedbeds. 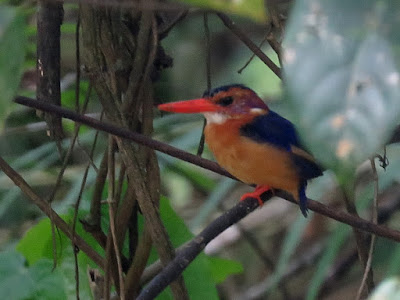 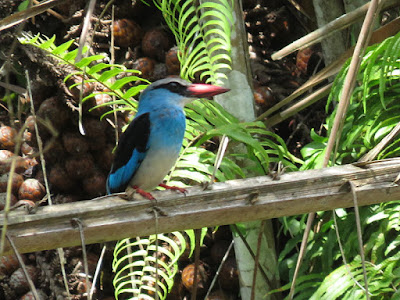 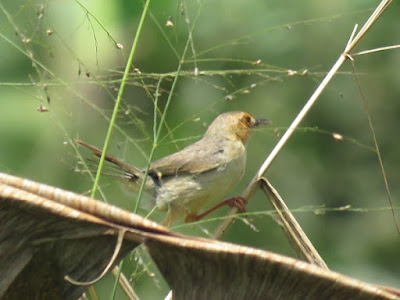 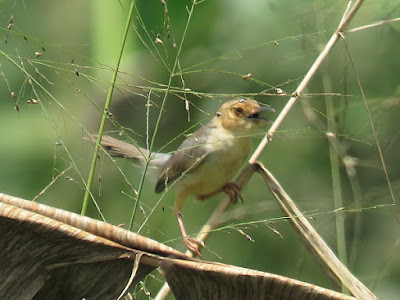 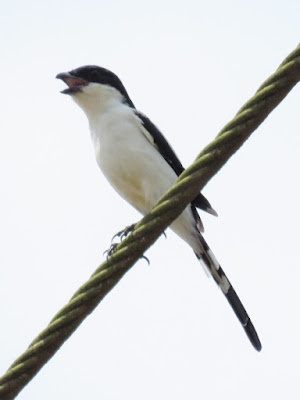 Friday 28 October. Breakfast at 05:00, left hotel at 05:30, driving to Nsuta Forest arriving at 06:30. We walked out and back along a somewhat muddy track until 10:30. Activity was good and we saw Palm-Nut Vulture, Great Blue Turaco, Piping and Black Dwarf Hornbills, African Piculet, Red-fronted Parrots, a flock of Red-billed Helmet-Shrikes, Finsch's Flycatcher-Thrush, Kemp's Longbill and Tessmann's Flycatcher although I was looking the wrong way when a Blue-headed Wood Dove flew across the track. apparently they were easier to see at ankasa where we were headed next. back at the bus I topped up with water and headed back down the track while the others returned for lunch. Emanuel caught me up and stayed with me, unasked for but it was good to have him along as he knew all the calls and had much better eyesight than me. We retraced our steps but activity had dropped off although we did see a very high-flying pair of Crowned Eagles (Emanuel had heard them), more helmet-shrikes and Emanuel found a pair of Grey Longbills building a nest.  The sky darkened as heavy rain clouds approached and we headed for a nearby tractor where Emanuel sheltered in its cab from 14:00-15:00, me under my umbrella, my tripod providing refuge for a toad. On the walk back we saw a pair of Olivaceous Flycatchers, I might even have spotted them by myself. We were almost back at the road when the others returned at 16:15. We went back down the track but activity hardly picked up, late afternoons were proving a disappointment emphasising how important it was to be in the field at dawn or soon after. We waited for dusk when Paul successful taped in a Fraser’s Eagle Owl using the calls of Akun Eagle Owl. We were back at the road at 19:00 and the D&A Guesthouse at 20:00, a long but successful day.


Saturday 29 October. Breakfast at 05:00, we left hotel at 05:30 driving back to Nsuta Forest where we walked the same trail to 10:30. It was a dull start to the morning but the sun soon burned oof the murk. Birding didn't quite match the previous day's but was still good with a perched Red-thighed Sparrowhawk, White-crested Hornbill, African Piculet, Sabine's Puffback, Fraser's Forest and Chestnut-capped Flycatchers.  We returned to the guesthouse for a shower and lunch before driving to Ankasa. On the way we stopped by the rooad for Orange Weaver and saw a very smart Black-billed Seedcracker repeatedly collecting long reed leaves and presumably taking them to a nest it was building. We arrived at Ankasa at 16:00 and after sorting out tents, I had my own, ended the day on the entrance bridge seeing a Shining-Blue Kingfisher and two Cassin's Flycatchers. After our evening meal, cooked for us to the usual high standard at the campsite and served at tables in a large open sided structure, I wandered back down to the bridge with a spotlight hoping for an owl. No luck but when I returned to camp one of the crew told me my friends were watching an animal by the 'restaurant'. I hurried over to find it was a superb African Wood Owl.