February drags on in and around Shoreham (10-26 February)

Saturday 26 February. Megan and I took Cookie for a walk around Mill Hill seeing 2 Buzzards, a Kestrel and a Goldfinch and hearing Skylarks. Both  Ring-necked and Lord Derby's Parakeets at Park Avenue late afternoon.

Friday 25 February. Cookie and I failed to find any Parakeets but perhaps looked a bit early as it was a sunny afternoon.

Thursday 24 February. I tested positive for Covid as did Josh, Megan having done so earlier. Just as well there isn't much about as socially distanced dog walks seem the order of the day (although I'm told I've spent most of my life trying to socially distance so what's new). Today 24 Goldfinches in Buckingham Park and the Lord Derby's Parakeet.

Wednesday 23 February. Megan and I took Cookie for a quick walk around the Adur seeing 2 Shelduck, 2 Skylarks, 4 Meadow Pipits and 5 Linnets.

Tuesday 22 February. Six Stock Doves were feeding on our lawn with both Ring-necked and Lord Derby's Parakeets at Park Avenue

Monday 21 February. An hour at Widewater produced a Red-breasted Merganser and 2 very distant Kittiwakes. Later Megan and I took Cookie to Dacre Gardens for a short walk along the Adur. I saw the drake Goosander, Little Grebe and Grey Wagtail. An afternoon walk with Cookie produced the Lord Derby's Parakeet at Park Avenue.

Sunday 20 February. A quick look at the Adur for gulls produced just 52 Great and 5 Lesser Black-backed, no Meds or rings. Lots of gulls at Brooklands with Megan and Cookie later but nothing stood out amongst them. No sign of the Mute Swan with 2 Teal and 2 Little Grebes just about scraping a notebook entry.

Saturday 19 February. Hoping for something in the wake of Storm Eunice I seawatched from Widewater from 07:20-08:20 by which time it was pretty clear little was moving. I saw 4 Red-breasted Mergansers, 22 distant Kittiwakes, an auk and 2 divers (one a definite Red-throated) flying west and single Oystercatcher, auk and diver flying east. A Turnstone was on the beach and a drake Red-breasted Merganser on the lagoon. Nothing was seen at the Fort on the way home but a stop at the Adur to check the gulls revealed an adult Mediterranean and a colour-ringed Lesser Black-back as well as single Little Grebe and Grey Plover. Megan and I took Cookie to Mill Hill but only saw 2 Buzzards and heard a  Skylark.  A Stock Dove was feeding in our garden, unconcerned by a flapping fence, and a quick walk around to Park Avenue drew a blank but the 'parakeet' tree was very exposed.

Friday 18 February. Storm Eunice came in overnight bringing down a section of our garden fence but fortunately our new solar panels were unaffected. I seawatched from Widewater between 08:55-09:55 but was disappointed seeing just 5 Brent Geese, 4 Turnstones, 40 Herring Gulls, an auk, 2 superb Fulmars and a Carrion Crow. I came home via Shoreham Fort but only saw 5 Turnstones. In the afternoon I propped the fence back up (unsurprisingly it didn't last) and Megan and I took Cookie to Southwick Canal seeing Great Crested Grebe, Rock Pipit and Paul and Bridget James. 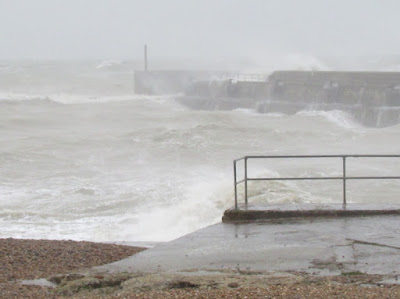 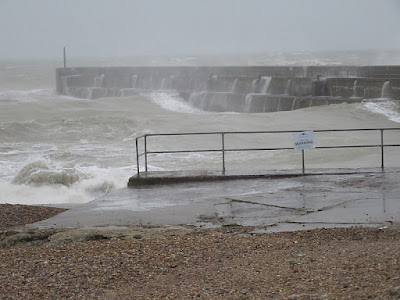 Thursday 17 February. Megan dropped her car off to be serviced and I took her and Cookie to Mill Hill. With strong SW winds hardly any small birds were seen - a hardy Skylark in song, a Song Thrush, 2 Chaffinches and a Greenfinch with a Bullfinch heard. Walking back to the car we saw in quick succession, a Buzzard, 3 Red Kites (flying SW) and a Raven which improved things no end.

Wednesday 16 February. I seawatched from Widewater from 07:25-08:55. Conditions were poor with Rampion not visible, most birds distant and those seen regularly disappearing into troughs. I saw 5 duck (probably Scoter), 6 Red-breasted Mergansers, a Great Crested Grebe, 98 Kittiwakes, 40 auks, a diver and another 23 Gannets. I met Megan and Cookie at Harbour Way where the incoming tide hadn't quite pushed a gathering of about 30 Black-headed Gulls which was fortunate as they included a colour-ringed bird from Poland. Nothing else was seen on our walk with just 5 Turnstones at the Fort at high tide. A late afternoon visit to the Adur for low tide produced over 1000 gulls including 5 adult Mediterranean and 2 repeat colour-ringed Herrings (one local and the other a North Thames bird I'd seen in 2015). 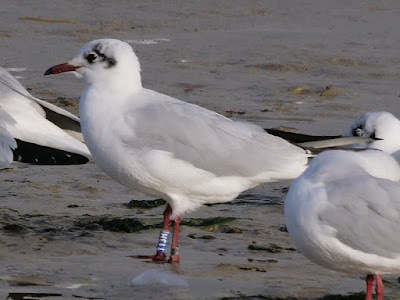 it was ringed when adult in WRZEŚNIA, WIELKOPOLSKIE, Poland April 2020 and seen there in April 2021

Tuesday 15 February. I seawatched from Widewater from 08:00-09:00 seeing 3 Brent Geese, Great Crested Grebe, 16 Kittiwakes, 230 auks (3 identified as Razorbills), 3 Red-throated Divers), a Fulmars and 23 Gannets.  A high tide visit to Shoreham Fort failed to produce anything. Two Stock Doves were feeding in the garden and late afternoon I took Cookie to Park Avenue where we saw both Ring-necked and Lord Derby's Parakeets. 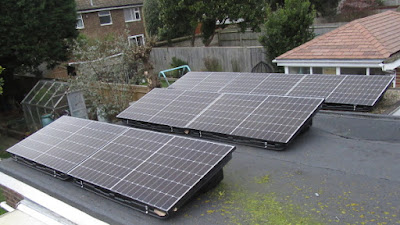 Monday 14 February. We had solar panels fitted to our roof. I'd thought as we don't have a south facing aspect it wouldn't be worthwhile but technology has moved on and even north facing panels can be effective. Half of the panels are on flat rooves and face south, 4 face east and 3 north. With soaring energy prices we should recoup the cost in under 10 years. A Stock Dove was feeding in the garden and late afternoon I took Cookie to Park Avenue where we saw both Ring-necked and Lord Derby's Parakeets.

Sunday 13 February. I seawatched from Widewater from 07:30-09:15 being joined before 08:00 by MP. I saw flocks of 25 and 6 distant duck, 2 close Velvet Scoter (W at 08:12), 9 Great Crested Grebes, a Curlew, 130 Kittiwakes, a summer adult Mediterranean Gull, 200 auks (2 identified as Razorbills), 25 divers (17 identified as Red-throated), 2 Fulmars and 85 Gannets. The divers were flying east, pretty much everything else west. I returned home and Megan and I took Cookie to Southwick Canal where we could only find 25 Cormorants. Late afternoon in persistent drizzle I took Cookie to Park Avenue but we failed to see the parakeets.

Saturday 12 February. Megan and I took Cookie to Dacre Gardens and we walked up to Bramber and back to Coombes. We saw 2 Grey Herons, Sparrowhawk and Stonechat and heard a Skylark. Late afternoon I took Cookie to Park Avenue where we saw both Ring-necked and Lord Derby's Parakeets.

Friday 11 February. I took Cookie up to Steyning Bowl and spent almost 4 hours walking a triangle from the Langmead Memorial, SW along the Monarch's Way, N to the South Downs Way and back. It was disappointingly quiet with 3 Kestrels (the only birds of prey seen), Jay, 20 Skylarks, 10 Chaffinches, 4 Corn Buntings and a Yellowhammer. Late afternoon I took Cookie to Park Avenue where we saw both Ring-necked and Lord Derby's Parakeets.

Thursday 10 February. I seawatched from Widewater between 07:50-09:20. Most birds seen. apart from the divers, were flying west and included 3 juvenile Mute Swans, 2 Great Crested Grebes, 2 Grey Plover, 55 Kittiwakes, 450 auks of which 55 were identified as Razorbills, 15 Red-throated and an unidentified Diver, Fulmar and 42 Gannets. I met Megan and Cookie by the Adur and we walked our usual circuit between the bridges. The tide was high and subsequently we saw very little. Late afternoon both Ring-necked and Lord Derby's Parakeets were at Park Avenue. 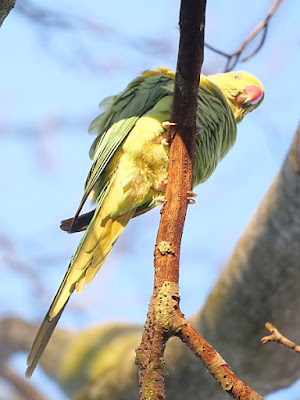 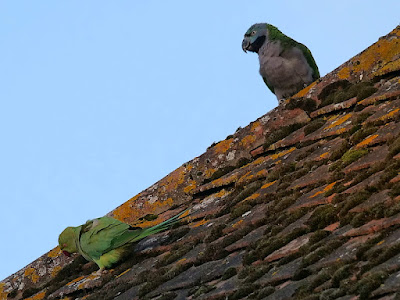 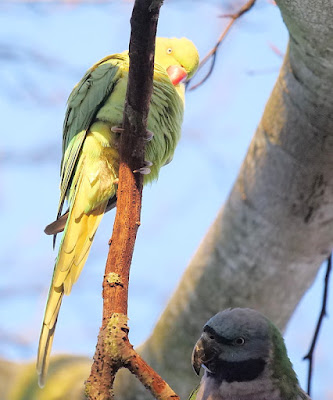 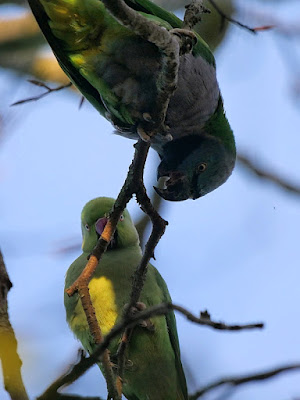 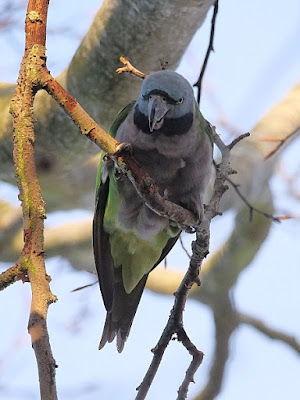 Posted by richard fairbank at 17:47 No comments:

Wednesday 09 February 2022. I was up early and successfully any Falmer queues arriving on site in Eastbourne at about 07:30. The American Robin had already been seen and I joined the assembled crowd. It showed briefly after about 10 minutes and then over the next three hours I had several prolonged but generally distant views between longer periods of it being out of sight (good for catching up with friends I'd not seen for some time). The American Robin was too far away for my camera but it was nice through the scope and I managed a few not-great digiscoped images. While there I saw Sparrowhawk and Great Spotted Woodpecker. I chose to return home rather than try anywhere else and just after the Drusilla's roundabout hit solid traffic which took half an hour to get through (temporary traffic lights on the A27 where it was reduced to one lane at the Charleston turning). This really reduced traffic flow and I breezed through the drainage works lane reduction at Falmer. A late afternoon walk with Megan and Cookie produced both the Ring-necked and the Lord Derby's Parakeet around Park Avenue. 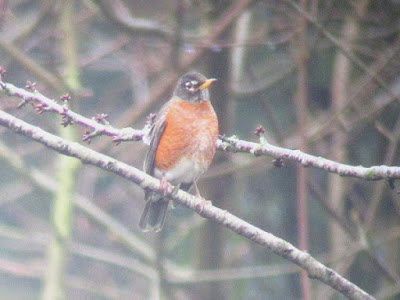 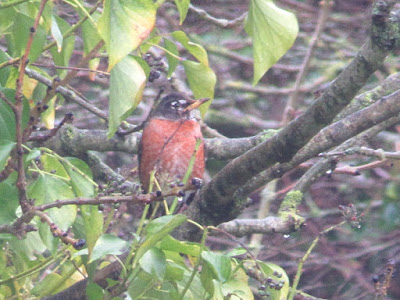 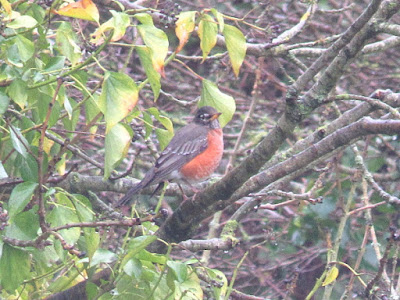 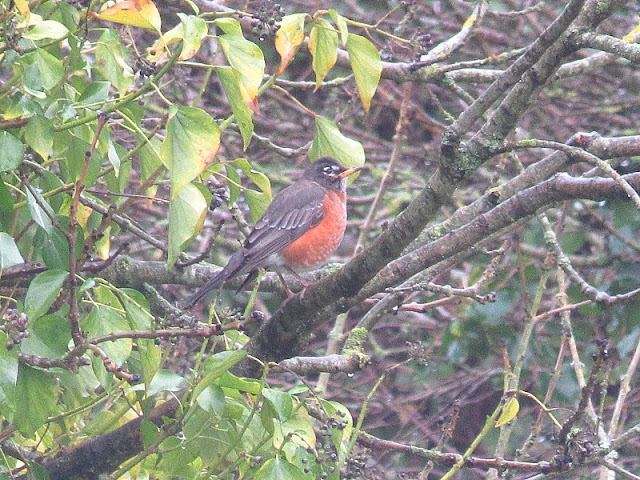 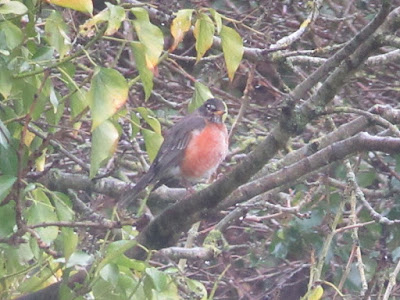 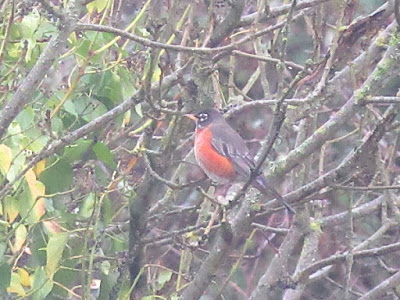 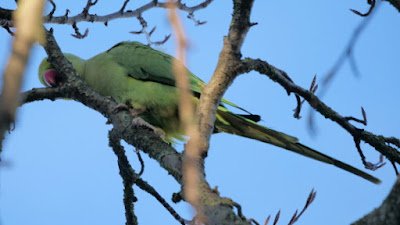 Tuesday 08 February 2022. I took Cookie up to Beeding Hill NT Car park and we walked our usual route SE along the Monarch's Way, N to Trueigh Hill and back skirting Room Bottom. We managed 27 species including Red Kite, 2 Peregrines, 900 Rooks, 2 Ravens, 41 Skylarks (singing constantly), 4 Stonechats, 6 Meadow Pipits, 3 Chaffinches, 6 Greenfinches, 6 Goldfinches and 7 Corn and 4 Reed Buntings. A brief look at the Adur while in town during the afternoon produced just a Grey Plover by the Waterfront on a high tide. News of an American Robin in Eastbourne broke too late to make it in normal conditions let alone the current chaos between Brighton and Drusilla's which is the A27.

Monday 07 February 2022. Megan and I took Cookie to the Adur walking down one side, across the Norfolk Bridge, around the Rec and back on the airport side. We saw 8 Teal (by Dogs Trust, we didn't check the houseboat channel), 126 Lapwings, 2 Grey Plover, 10 Redshank, Kingfisher, Skylark and 15 Goldfinches. A late afternoon walk around Park Avenue with Cookie produced just the Lord Derby's Parakeet.

Sunday 06 February 2022. I seawatched from Widewater from 08:00-09:15 seeing 12 Red-breasted Mergansers, 4 Great Crested Grebes, 2 Grey Plovers, 9 Kittiwakes, 3 Razorbills and 4 unidentified auks, an unidentified Diver, 4 Fulmars and just 4 Gannets. Once home Megan and I took Cookie to Brooklands where 3 Great Spotted Woodpeckers and 15 Goldfinches were our most notable sightings. Later on the Adur at low tide we saw a Little Grebe,  112 Lapwings, Grey Plover and 54 Great and 6 Lesser Black-backed Gulls. Le Havre 50H was amongst the former. A late afternoon walk around Park Avenue with Cookie produced both the Ring-necked and the Lord Derby's Parakeet.

Saturday 05 February 2022. Megan and I took Cookie to Cissbury where we saw 5 Buzzards, 2 Jays and 2 Mistle Thrushes. Both Ring-necked and Lord Derby's Parakeets were seen with Cookie around Park Avenue late afternoon

Friday 04 February 2022. I seawatched from Widewater from 07:50-09:05 seeing 6 Great Crested Grebes, 140 Kittiwakes, 11 Guillemots, 140 Razorbills and 1100 unidentified auks, an unidentified Diver, 2 Fulmars and 120 Gannets. On my way home on the Adur at low tide were 92 Great and 7 Lesser Black-backed Gulls. Le Havre 50H was amongst the former. A late afternoon walk around Park Avenue with Cookie produced just the Lord Derby's Parakeet.

Thursday 03 February 2022. I seawatched from Widewater from 07:45-09:00 seeing 3 Great Crested Grebes, a Turnstone, 205 Kittiwakes, 54 Razorbills and 415 unidentified auks, 3 Red-throated and 2 unidentified Divers and 55 Gannets. I returned home to collect Megan and Cookie and we went to Southwick Canal seeing the Long-tailed Duck beside Barrett Steel on the few occasions it was not under the water. Late afternoon I took Cookie around Park Avenue and saw both the Ring-necked and Lord Derby's Parakeets feeding on buds in the usual tree. 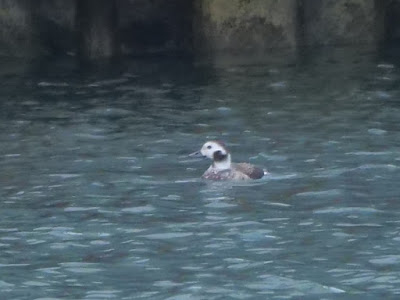 Wednesday 02 February 2022. Megan and I took Cookie to Steepdown where we saw 2 Stock Doves, 3 Red Kites, Buzzard, 31 Skylarks, 2 Redwings, 3 Stonechats, a Linnet, 5 Goldfinches and 31 Corn and a Reed Bunting. Late afternoon I took Cookie around Park Avenue and saw both the Ring-necked and Lord Derby's Parakeets feeding on buds in the usual tree. 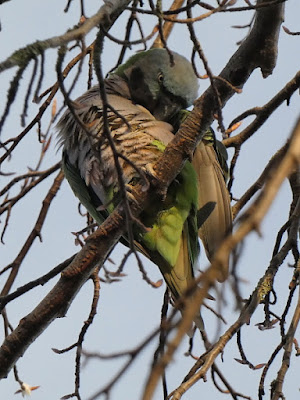 Tuesday 01 February 2022. As I took Cookie to Widewater both parakeets flew out of their roost tree at Park Avenue. We seawatched from 07:40-09:10 seeing 3 Shelduck, 6 Great Crested Grebes, 5 Turnstones, 505 Kittiwakes (flying W), 4 Guillemots, 78 Razorbills, 455 unidentified auks, 2 Red-throated and 5 unidentified Divers, 4 Fulmars and 225 Gannets. We walked to the end of Widewater seeing 9 Little Grebes on the lagoon and a b in the wader roost with 36 Ringed Plover and 118 Dunlin. With the tide high we visited Shoreham Fort but failed to find any Purple Sandpipers. Thirteen Turnstones were at Shoreham Harbour with a Guillemot and 3 Razorbills on the sea off the entrance. Late afternoon I took Cookie to the Adur for low tide but only saw 2 Grey Plovers, 25 Great Black-backed Gulls and A2FA, an orphan Herring Gull ringed in Hastings in August 2003 that I'd seen on the Adur seven times since 2010. 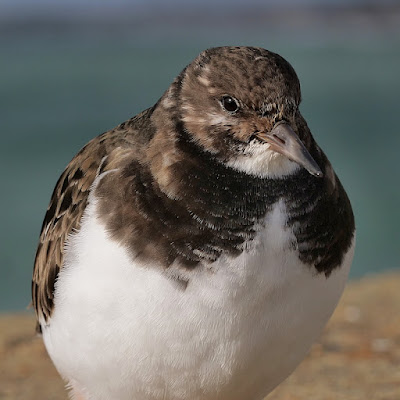 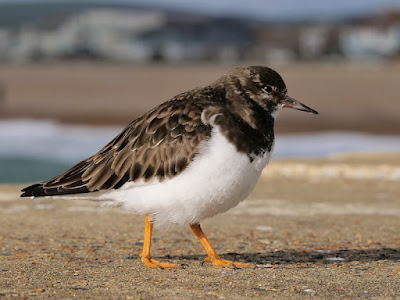 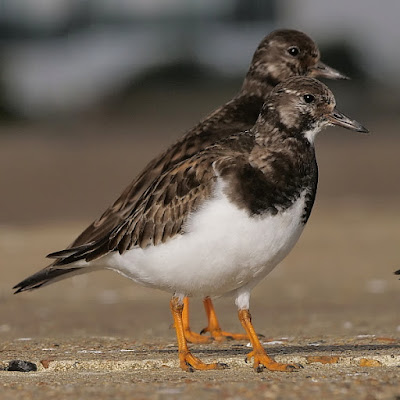 Posted by richard fairbank at 17:40 No comments: