Sunday 25 November. I decided to check the Cuckmere gull flock and look for the Seaford Snow Bunting on the way, Cookie came too. I diverted to Newhaven Harbour on the way as the rising tide was still quite low. A few gulls were on the beach and included two colour-ringed Great Black-back Gulls. One with a Norwegian ring walked into the sea just far enough to submerge part of its ring and then flew. It looked to have been JC383 seen earlier in the month on the Adur and by Matt at Newhaven the previous year but I couldn't be sure of the second character. The other a Le Havre bird was at an angle that only the bottom of one of the characters was visible, either an O or U, and then immediately flew. I waited for 20 minutes as the tide covered half of the exposed beach but neither returned. Frustrating. I then failed to find the Snow Bunting in 45 minutes of looking and headed to the barn on Seaford Head. We headed down to Harry's Bush and the nearer of two gull flocks, noting Matt walking in our direction from the further larger flock. Our flock held just an adult Yellow-legged Gull but Matt had seen an adult Caspian in his, and four White-fronted Geese had dropped in near them. Matt had also failed with the Snow Bunting but had recently seen 85U at Newhaven, the Le Havre mystery solved. I followed Matt back to the larger flock and we spent an hour scanning from a raised track, Cookie being very patient throughout. We picked out five Caspian Gulls (2 adults, a third-winter and two first-winters) that we were happy with and six Yellow-legged Gulls (5 adults and a second-winter). During this time Neil and Chris appeared and we pointed out to them the Caspians that were on view (and the White-fronts). After an hour and as there seemed little movement amongst the gulls we gave up. I had a final look through the smaller flock on the way back seeing a first-winter Yellow-legged Gull. Checking my phone back at the barn I saw that the Snow Bunting had been seen after we'd left but another half hour there on the way home drew another blank. Back home while checking my photos I discovered they were all over-exposed, not that they would have been very good to start with but inadvertently taking them at +2/3rds hadn't helped. 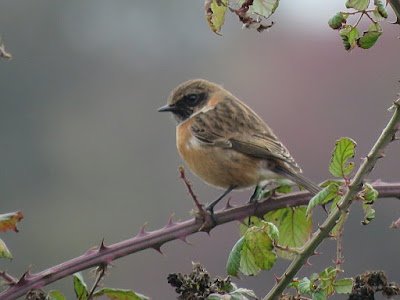 Saturday 24 November. Two Turnstones and 15 Greenfinches at Shoreham Fort with five Razorbills on the sea but I soon gave up due to poor weather.
Friday 23 November. Seventeen Fieldfares flew east over Mill Hill while I was up there with Cookie. Three Redwings were with them and another was in the bushes. Later we visited Beeding Brooks with Megan seeing 3 Short-eared Owls mainly in the same area (over towards the Small Dole road) as last week, 40+ Fieldfares and 2 Reed Buntings.

Wednesday 21 November. A late afternoon visit to the River Adur produced an adult Mediterranean Gull, 9 Redshank and 2 Dunlin, one of the later appeared almost as dark as a Green Sandpiper. Earlier on the way to take my car to the garage a Sparrowhawk flew over.

Sunday 18 November. A visit to Pulborough and the Burgh with DB was quickly curtailed when I realised I had a flat tyre. I then couldn’t get the jack to work, the one I’d been given with the car was for an opal not a Fiat and had a different head. I borrowed Megan’s, for a Kia, which seemed to fit better but still didn’t seem to work so called the RAC. They put on the space saver but I was reluctant to drive far on it. They punctured tyre had a screw in the outside of it and was not repairable so I decided to wait to take it into the garage later in the week. In the afternoon Megan and I took Cookie behind the Power Station seeing a Peregrine sat near the chimney, 5 Turnstones and a Rock Pipit.
Saturday 17 November. I took Cookie up to Mill Hill where we saw 2 Grey Herons sat in the middle of a stubble field, 2 Buzzards, 4 Song Thrushes, 4 Goldfinches and a Linnet. Autumn is certainly over.

Friday 16 November. I took Cookie to Shoreham Fort seeing a Meadow Pipit and 21 Greenfinches so wasn’t best pleased to later learn that two Black Redstarts were seen there later. We called in at the Adur seeing 5 Ringed and 3 Grey Plover, 17 Dunlin and 12 Redshank but very few gulls. In the afternoon Megan and I took Cookie to Beeding Brooks where 3 Short-eared Owls were a welcome sight. Also 6 Fieldfare and 600+ Jackdaws gathering before roosting.
Wednesday 14 November. I took Cookie to Brooklands on the off-chance the Pallas’s Leaf Warbler might still be around but it had gone overnight. We saw an adult Mediterranean Gull on the lake and 3 Chiffchaffs, 5 Goldcrest and 11 Long-tailed Tits in the bushes. Later as the sun was shining we went with Megan to Beeding Hill where the Little Owl was sunning itself. Also 24 Fieldfares and 6 Redwings were my first winter thrushes. 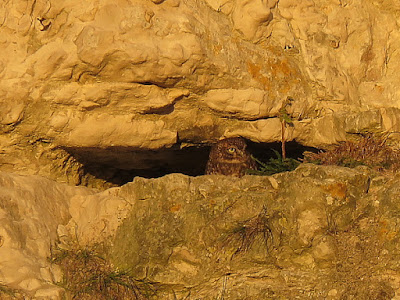 Sunday 11 November. Poor weather stopped me going further than a dog walk in Buckingham Park where 60 Goldfinches was the only notebook entry.

Posted by richard fairbank at 22:46 No comments:

Saturday 10 November. I took Cookie to Seaford Head and we walked down to Harry's Bush on our way to check the gull roost. The lower part of Harry's Bush was full of Goldcrests with at least 60 zipping around. While looking through them news came through that Paul and Gareth James had found a Pallas's Warbler at Brooklands but despite renewed efforts I didn't advance on 2 Chiffchaffs and 10+ Long-tailed Tits. The lure of a decent sized gull flock (c1000 birds) dragged me away and I spent the best part of two hours (10-12) going through them, the last hour with sharp-eyed Matt Eade who had been watching from slightly higher up the valley. As usual the flock was a bit too far away to see fine plumage details or obtain decent images of the birds, some of the more interesting birds were sat down, often asleep, or walked through the flock quickly, disappearing into hollows or behind other birds. So not a precise science but despite this Matt recorded adult, third-winter, second-winter and a first-winter Caspian Gull (see http://seafordbirding.blogspot.com/ which has decent images of most of them). To these I could add a second adult, but only because at one stage before Matt arrived there were two standing together. I briefly saw what looked good for a second-winter before it disappeared into a ditch and later photographed what might have been it, although one image looks more like a third-winter, perhaps a different bird. The first-winter I photographed didn't appear as clear cut as in Matt's images although my digiscoping (and perhaps telescope) leaves something to be desired. So at least five Caspian Gulls, four of which were different to the four Matt had seen the previous day. We saw a couple of Caspian Gull contenders but they didn't look quite right and could well have been hybrids. Two of the estimated 950 Great Black-backed Gulls had unreadable colour rings, one a Norwegian one and the other I could only read the first characters of (white X02 on a blue ring) and can't trace the scheme. One of the 100 or so Herring Gulls was huge with a darker mantle and heavily streaked head suggesting it was an argentatus and the flock only held only about 20 Lesser Black-backed Gulls but 8 Yellow-legged Gulls (mostly adults). I dragged myself away (Cookie had been restive for a while) and drove to Brooklands where I saw the Pallas's Warbler briefly soon after arriving and again better a couple of hours later. Also 2 Chiffchaffs and a brief Coal Tit that looked rather too clean for ours. 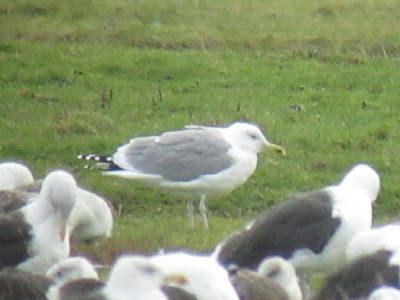 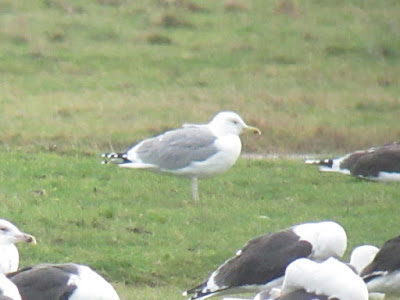 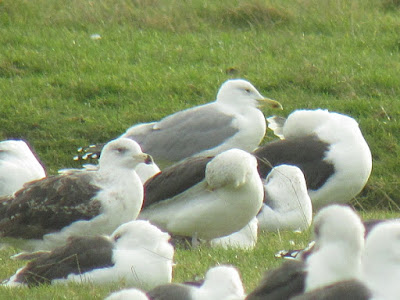 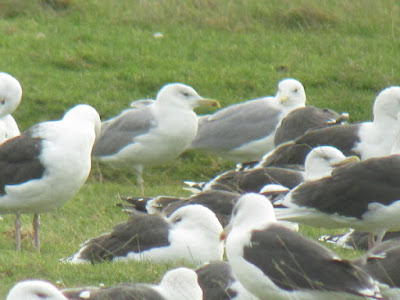 Friday 09 November. Colin Winyard came over from Winchester and took Frank Lambert and me over to Beachy. There was a large loose flock of Goldcrests quickly moving around Belle Tout Wood, 75 would be a cautious estimate. Colin saw a Coal Tit (presumably Continental), Frank a Treecreeper and I saw a Brambling but missed the 1-2 Chiffchaffs seen by the others. Otherwise there only appeared to be a couple of Blue and Great Tits with them which was disappointing. Bob and Lawrence were in the wood when we arrived but didn't manage to dig anything else out either. We called in at Hodcombe where there were also a lot of Goldcrests. Roger estimated 60 and had seen a Firecrest. Many of the Goldcrests were very tame feeding on the lawns, something I'd not experienced before and perhaps for me the event of the autumn. Over 100 Goldcrests in a day was also a record for me - not enough East Coast birding obviously. 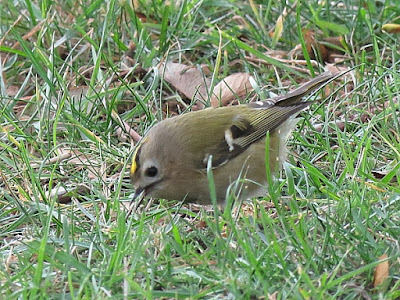 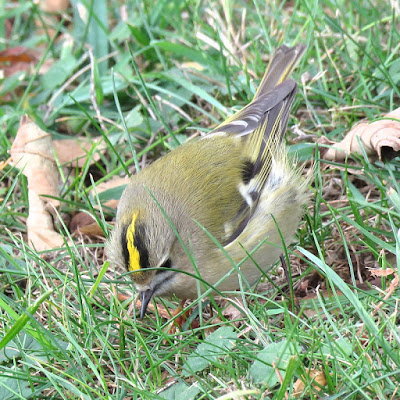 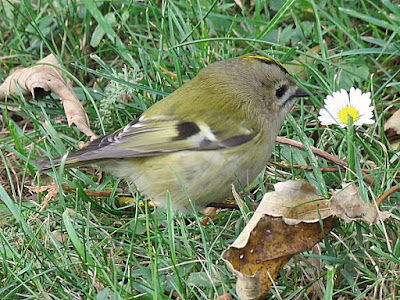 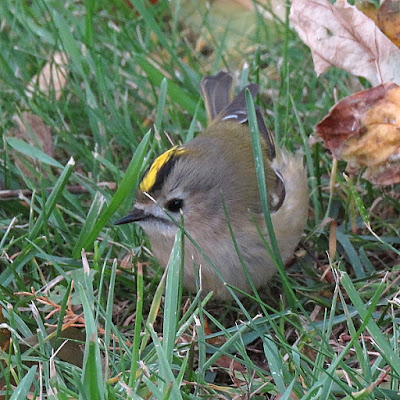 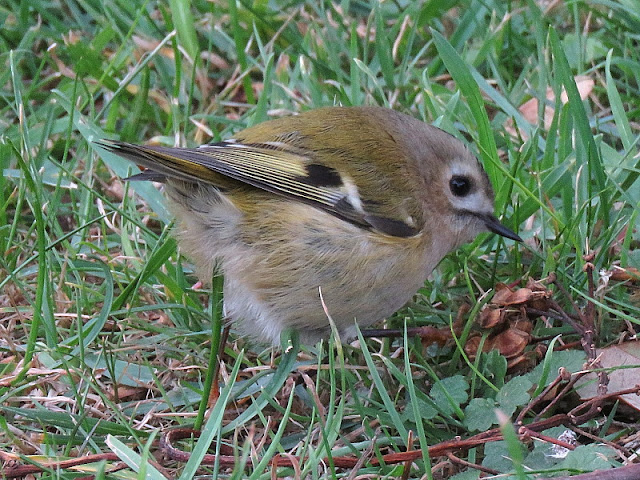 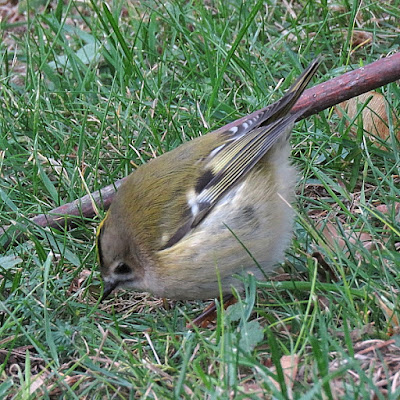 Wednesday 07 November. I took Cookie to Brooklands were we saw a Firecrest, 2 Goldcrests and 10 Long-tailed Tits.
Sunday 04 November. Megan and I took Cookie up along the Chantry Hill-Rackham Hill section of the South Downs Way. I saw 4 Red Kites, a female Marsh Harrier, 19 Red-legged Partridges, 150 Lapwing, 7 Yellowhammers and a Corn Bunting. Some distant clay-pigeon shooting had Cookie worried. A difficult time of year for nerevous dogs. Later I went down to the Adur by the Airport where there were 20 Ringed and a Grey Plover, 7 Dunlin, just 4 Redshank and 20 Great Black-backed Gulls. The latter included a 3CY Norwegian bird that had been seen by Matt Eade at Newhaven a couple of times last November. The section of public footpath on the East bank near the railway bridge remained closed despite works supposedly finishing in October, not that I was at all surprised.
Posted by richard fairbank at 20:07 No comments: