Megan and I spent a week staying in a mobile home at Drancourt, just outside St. Valery. It was the fifth time we've had a week there but all previous visits had been in early September. We like the area and using the Newhaven-Dieppe ferry makes for a very easy journey.

Saturday 19 May. We left home just before 08:00 but a puncture on Hove seafront wasn't the best start. The tyre had a gash in the side-wall, something I'm not sure a repair kit would have fixed, but fortunately we had a space-saver and once the boot was unloaded we soon fitted it. We arrived on time for the ferry but checking the internet for a tyre in the Dieppe area suggested nothing was likely to be open on Saturday afternoons or Sundays. We then realised that Monday was a French Bank Holiday when garages were also likely to be closed. It is times like this one realises how much we take our almost 24/7 lifestyle for granted. The crossing was calm but almost birdless with only a few Gannets, 2 Fulmars and a Guillemot. We were soon off the ferry, being greeted by a male Black Redstart by immigration. An hour later at Drancourt we checked into our mobile home and then visited the local supermarket. After tea we walked around the campsite, seeing breeding House Martins and White Wagtails, to the fields behind. Several Sky Larks were singing and we heard Grey Partridge but few birds were seen.

Sunday 20 May. We drove into St. Valery and walked a circuit around the back of town seeing Yellowhammer and Corn Bunting and along the river front. The tide was a long way out and Oystercatcher the only wader identified. It was nice to see and hear Swifts screaming around the town. Not keen to drive far on a space-saver we returned to Drancourt and in the afternoon walked a circuit from the campsite, through some nice looking but rather quiet woods and back round tracks and minor roads. Three Melodious Warblers on the edge of the campsite were nice although none posed for the camera and distant Tawny Owl was heard in the woods. Later a Spotted Flycatcher was seen on the campsite and a Goldcrest was in the pine belt where I'd most often seen Crested Tits on previous visits (I checked this and other areas in the campsite at least once a day but to no avail).

Monday 21 May. We visited the garage in St. Valery just after 08:00 but there was no sign of life. We phoned Euromaster in Eu but a recorded message said they were closed too. Another day on the space saver so we drove to La Hourdel parking along the road near Brighton. The tide was a long way out and we walked north along the beach to the concrete gun emplacement where several groups of guided walkers were gathered looking at some seals. Many more seals were on sandbanks far out in the estuary but the only waders seen were 30 distant Oystercatchers, 20 Ringed Plover and 11 Common Sandpipers. Six Spoonbills and a White Stork flew over and at least 7 Nightingales were heard in the coastal scrub. At La Hourdel three close Great Black-backed Gulls had colour-rings, 2 from Le Havre and one from Norway. We returned around the back of some gravel pits seeing 3 Turtle Doves, 4 Cuckoos, 12+ flava Wagtails, 12 Sand Martins and 2 Spotted Flycatchers. Two Grey Partridges were seen again on the evening circuit. 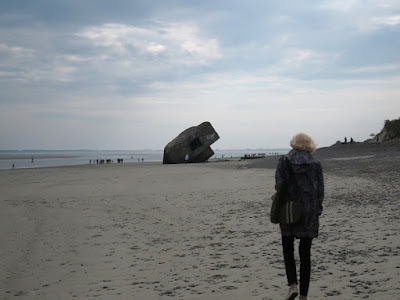 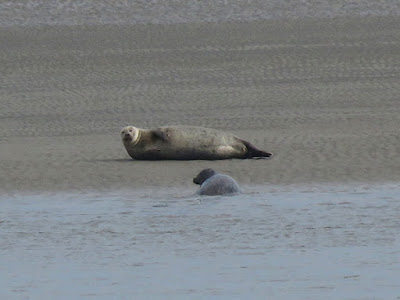 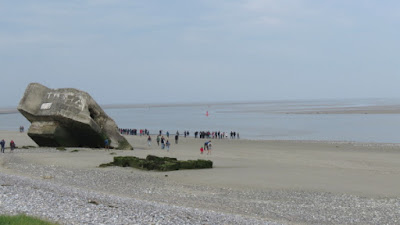 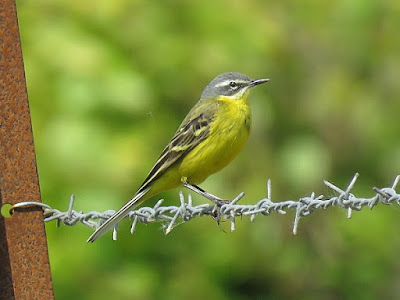 Tuesday 22 May. We drove the 20km to Eu arriving at Euromaster just before 09:00. They had a new tyre and suggested we return for it in an hour when it should be ready to fit. We drove around Le Treport and walked south along the clifftop seeing Fulmar and 2 Corn Buntings before returning. With new tyre fitted we returned to Le Treport, descended the funicular and had a short walk around town. After lunch we drove to Cayeux-sur-Mer and walked south around some old gravel pits and back along the beach. This was excellent with a Crested Lark by the car, an Avocet, 2 Ringed, 6 Little Ringed and 5 Kentish Plovers, 6 Black-tailed Godwits, Greenshank, Wood Sandpiper, 5 Mediterranean and another Norwegian Great Black-backed Gull, 3 Sandwich Terns (the only terns all trip!), Cuckoo, 3 flava Wagtails and a Stonechat. Late afternoon we revisited the woodland near the campsite without seeing anything although one of the Melodious Warblers was seen again on the edge of the campsite as was a Spotted Flycatcher. 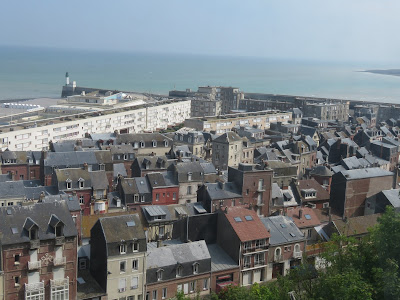 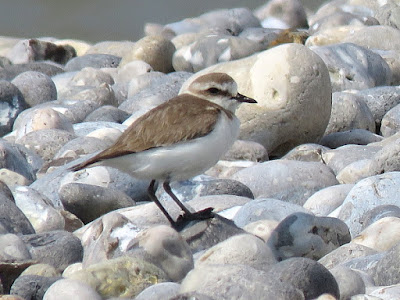 Wednesday 23 May. Today we had planned on visiting Monet's Garden in Giverny but I hadn't slept well, kept awake by toothache. The options to see a dentist were pretty non-existent so we drove to Sailly-Bray and walked a track recommended by MCC (thanks). Here we saw a male Red-backed Shrike and on our return followed a Bluethroat along the track for 50m although it only showed in flight. I had a brief view of a warbler I thought might be Savi's and probably overlooked a Marsh Warbler that didn't show much better. After lunch we visited a Pharmacy in St. Valery for some pain killers for my toothache before driving to Marquenterre. It was nice to see breeding Black-necked Grebes, Spoonbills, a few White Storks, Avocets (some with chicks) and 2 Black-winged Stilts but it was a rather disappointing visit with the water levels too high for most waders even though the tide in the estuary was quite high. A juvenile Little and 10 Mediterranean Gulls were flying around, the latter calling, and warblers included nice views of a Cetti's. The car-park pine woods did not disappoint however with 2 Crested Tits - my only ones of the trip. 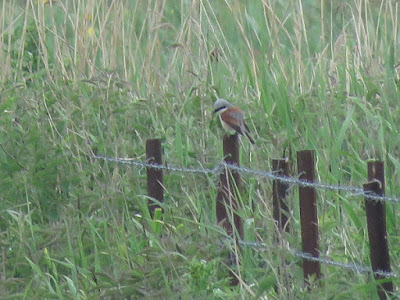 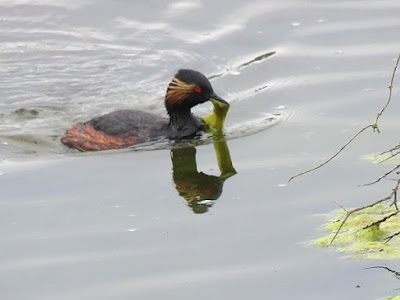 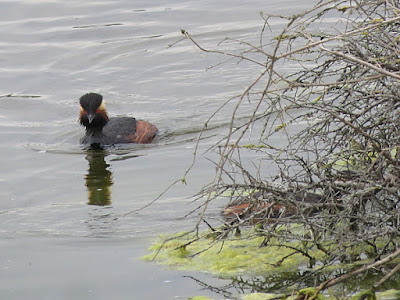 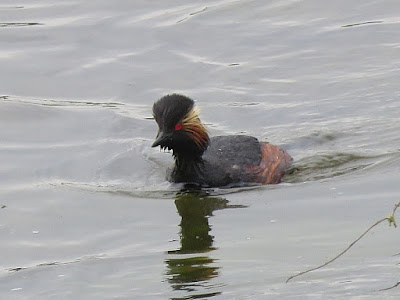 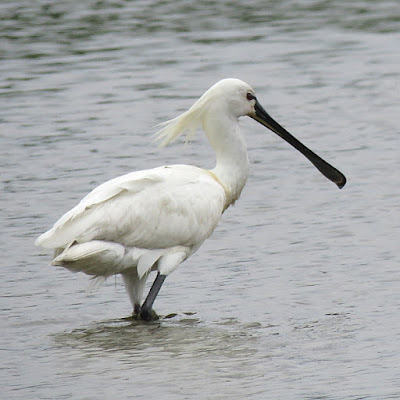 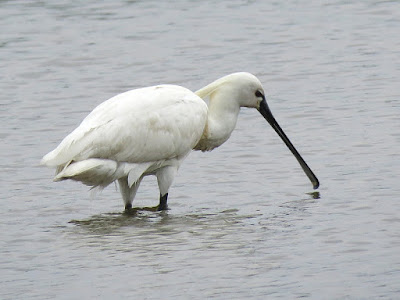 Thursday 24 May. We finally made it to Monet's Garden in Giverny, leaving at 07:30 we arrived just before 10:00, the 100 mile journey taking a little longer than expected due to poor visibility in places. Fortunately the murk didn't extend as far south as Giverney (but we encountered it again on our return north). We arrived half an hour after opening time and already it was getting quite busy although we didn't have to queue for more than a couple of minutes to buy tickets and walked around without too much trouble. The garden's flowerbeds were very impressive and full of colour, it was clearly a good time of year to see them. The pond was busier and not quite so impressive, probably not the best time for the water lilies. It was a lot busier when we left with quite a queue of people waiting to go in. We walked to the churchyard and saw Monet's Grave although a male Black Redstart and singing Melodious Warbler were more to my liking. The usual circuit around Drancourt produced Garden Warbler and 2 Yellowhammers. 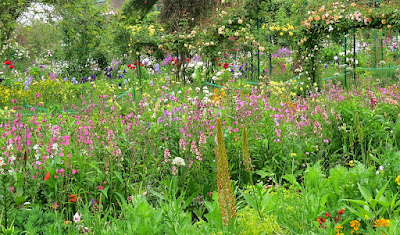 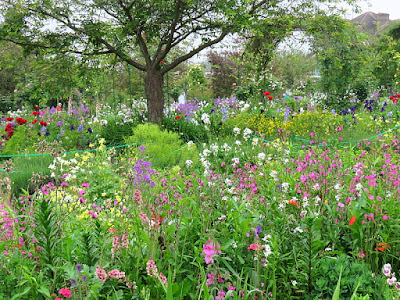 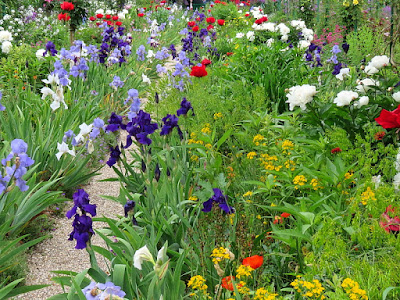 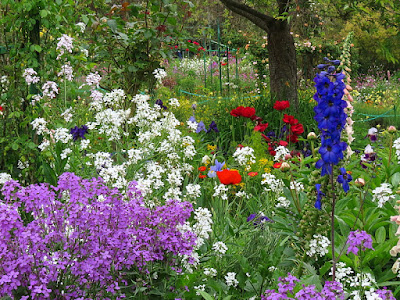 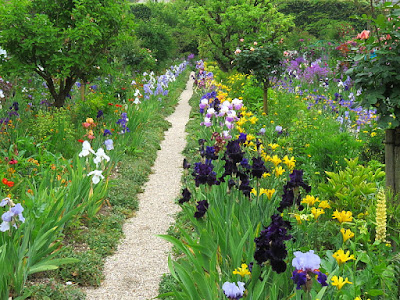 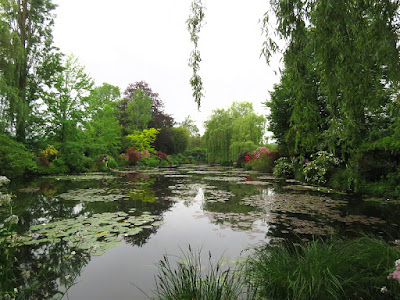 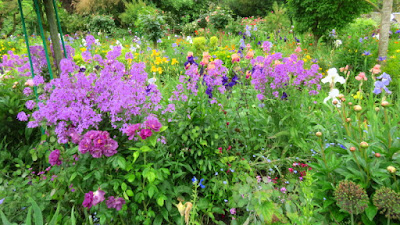 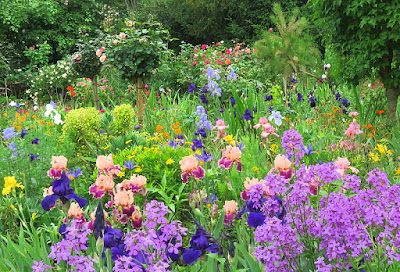 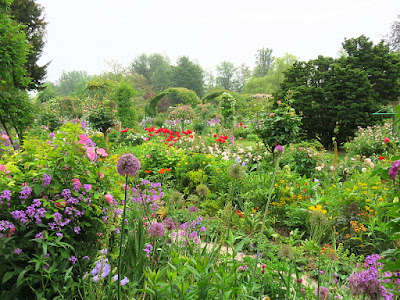 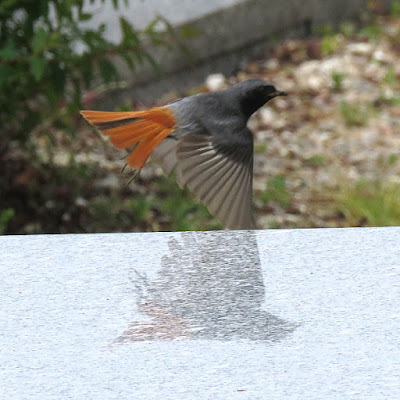 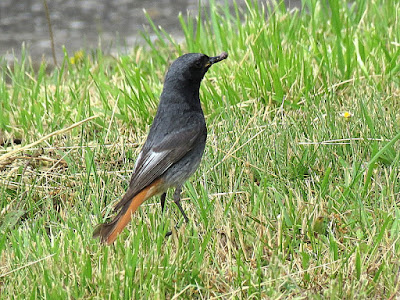 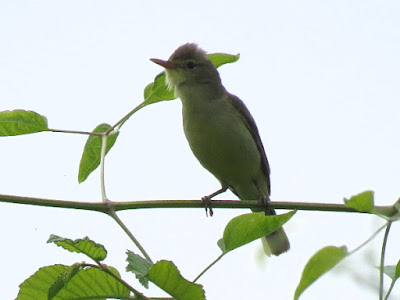 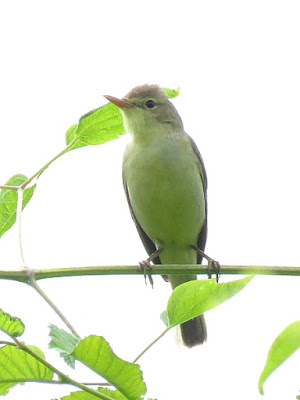 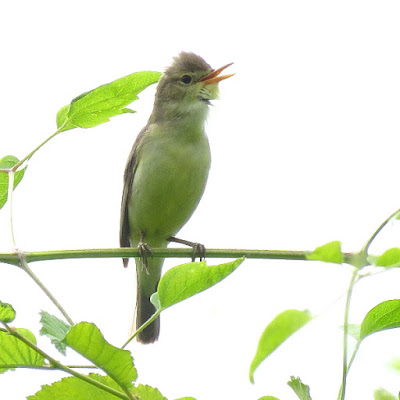 Friday 25 May. Another murky morning, we drove to Crecy and walked a Petite Route round the eastern part of the forest. Lots of commoner birds were singing as were 2 Cuckoos and a Melodious Warbler but disappointingly we saw hardly anything, 2 Great White Egrets on the journey the best. We revisited thew supermarket to buy a few things to take home, the visit enlivened by 5 Mediterranean Gulls flying over the car park calling. The usual pair of Grey Partridges were seen at Drancourt but little else.
Saturday 26 May. We checked out at Drancourt at 09:00 and drove to La Hourdel where we watched for an hour on the rising tide. Our first Marsh Harrier of the week flew over as did a Spoonbill. At least 60 close Sanderling were feeding along the shore while 200 distant small waders were probably the same. Two summer plumaged Turnstone flew by and we also saw 2 Turtle Doves and a Spotted Flycatcher while a singing Nightingale remained hidden. We then drove to Dieppe, arriving with time to walk up to the church overlooking the Ferry Port where there were 3 Black Redstarts. The ferry left a few minutes late, one of the last cars to arrive having been pulled over by customs/immigration and escorted away by police ... A Shag was on the harbour wall as we left but the crossing was murky with just 4 Gannets seen although a pristine plumaged Rock Dove slowly overtaking us as it flew north looked impressive. The weather cleared as we approached the Sussex coast giving fine views from Seaford to Beachy Head.

Posted by richard fairbank at 22:33 No comments: