Another trip from the archives, based on memories and scanned slides or very variable quality!

One  autumn evening in 1977 I was in the George at Cley when the barman asked if there was a Richard Fairbank present as he had a phone call for him.  Fearing bad news from home I was pleasantly surprised to find it was Pete Walton asking if I’d be interested in joining him, Mark Chapman and Chris Heard on a 4 week trip to Kenya that Christmas.  It would mean giving up my job but it was a time of fuller employment and I wasn’t enjoying being an accountant much so it didn’t take me long to think about it!

I was certainly rather ill prepared for the trip and we had little information on where to go.  Chris had some notes from Tony Smith and I had the William’s East African National Parks Field Guide.  Bird identification wasn’t helped by pretty much everything being unfamiliar and the William’s East African Birds Field Guide being far from comprehensive although Chris was astoundingly good.  We did have the two East African volumes of Mackworth-Praed and Grant for reference but I have subsequently realised that I had made some pretty obvious errors as successively better guides were published.  Only Mark and Pete could drive and only Chris had been outside of the Western Palaearctic before.  That said Chris, Mark and Pete were amongst the keenest British twitchers/birders at the time so we wouldn’t be lacking in effort and that proved to be the case with us birding pretty much every hour available.  In hindsight we might have spent more time preparing our route as it ended up looking like a dyslexic’s attempt at join up the dots as we seemingly criss-crossed the country several times. I was often completely out of my depth but despite this found it a very enjoyable trip with excellent companions.


22 December 1977.  Arrived at Heathrow for evening flight to Nairobi via Khartoum.  Met up with Mark, Chris and Pete and discovered our Sudan Airlines flight had been delayed by 24 hours.  Taken to a nearby airport hotel for the night.


23 December 1977.  Back to Heathrow.  Departed on an uneventful flight to Khartoum.


24 December 1977.  Arrived Khartoum soon after dawn.  Spent time in transit on observation roof of terminal building seeing Chestnut-bellied Sandgrouse, Namaqua Dove and Chestnut-backed Finch-Lark.  It was frustrating knowing we were most likely within a few miles of Egyptian Plovers on the Nile, if only we’d been stuck in Khartoum rather than London.  Arrived Nairobi where we had some difficulties hiring a car as most companies only did so to those over 23.  I was the only one of us who was 23 but couldn’t drive.  We eventually found a local operator that wasn’t too fussed but would only offer a limited mileage deal.  We were told of the penalty should the speedo become detached although if we’d known quite how many miles we’d clock up we’d’ve done that as soon as we were out of his sight!  We were taken into Nairobi to collect the car and drove to Athi Farm in the dark.  A few birds were seen around the airport and on the drive into Nairobi

27 December 1977.  Spent several hours on the beach at Malindi. Visited Mida creek again, this time with the tide going out which was a bit better. Spent time in woodland south of Gedi and in the edge of Sokoke Forest.  Both were disappointing.  Drove back down to Mombassa finishing the day at Fort Jesus.  Continued south and camped near the sea close to the Shimba Hills.  Best birds were African Fish Eagles, Crab Plover (just one), White-throated Bee-eater, Pied Kingfisher and Eastern Bearded Scrub-Robin.

28 December 1977.  Birdwatched for an hour in the scrub where we camped.  Drove to Kwale area of Shimba Hills, birding en route, where spent several hours.  Drove around Shimba Hills towards Lunga, stopping in good habitat.  Drove back to Mombassa stopping occasionally.  Then drove back to Malindi and spent a second night on the beach there.  Best birds were Palm Nut Vulture, Fischer’s Turaco, Silvery-cheeked and Trumpeter Hornbills, Pangani Longclaw and Violet-backed Starling.  We also saw Red and Black & White Colobus Monkeys.

29 December 1977.  Spent little time at Malindi early morning before driving north to Ngomeni peninsular.  Spent several hours watching waders there before returning to Malindi.  Took road to Tsavo East stopping in Sokoke Forest.  Spent the night at Crocodile Camp just outside Tsavo East, the last part of the journey to the camp in darkness during which time we had to change a flat tyre – slightly concerning.  Best birds were Pigmy Falcon, Crab Plover (70), Spotted Stone Curlew, Heuglin’s Courser, Carmine Bee-eater and a displaying male Paradise Whydah.

30 December 1977.  Early morning at Crocodile Camp.  Day spent driving around Tsavo East, being turned back from Lurgard Falls by bad roads and finally reaching there from the west just before dark.  Drove back to Voi where camped.  Best sightings were Ostrich, Bataleur, Cream-coloured and Heuglin’s Courser (50 on road at night), Somali Bee-eater, Ground Hornbill, Golden Pipit, Cinnamon-breasted Rock Bunting and a selection of mammals.

31 December 1977.  Drove into Tsavo West from the south heading up to Mzima Springs.  Tried several roads without success finally going round, back through Voi and entering from north.  Got to one of the lodges at dusk and spent the night there.  Best sightings, mnostly from the car, were 16 Elephants, Verreaux’s Eagle, Vulturine Guineafowl, Hartlaub’s Bustard, Great Spotted Cuckoo, Boehm’s Spinetail and Verreaux’s Eagle Owl. 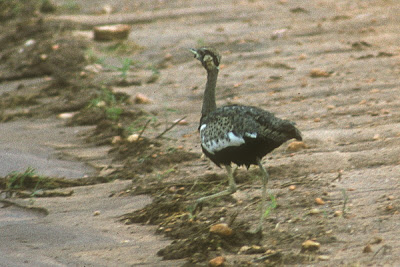 Posted by richard fairbank at 14:04