11 August 1991.  By chance we had camped opposite South Pans Lake and were woken by over 200 Blue Cranes leaving roost!  We spent some time watching the cranes feeding in distant fields and asked a farmer permission to drive up his track to get closer to them which was brilliant.  Unfortunately some local farmers regard the cranes as a pest and we later heard that about 40 had been poisoned in this area shortly after we left.  We drove on towards De Hoop seeing 8 Stanley's Bustards, 2 Karoo Korhaans and 6 Clapper Larks before passing the entrance and heading towards a ridge known as the Potberg.  This is a site for winter breeding Cape Vultures but we saw 16 shortly after the De Hoop turn off and did not go any further.  We then spent most of day in the National Park, mainly in scrub along the lagoon beside headquarters/chalets.  The lagoon held impressive numbers of selected wildfowl (250+ Cape Shoveller, 5000+ Crested Coot) while the scrub produced Southern Tchagra but not the hoped for Knysna Woodpecker which also occurs.  We drove to the coast, a rather circuitous route to pass to east of the high dunes and were rewarded with 3 close Southern Right Whales.  We left De Hoop and returned to South Pans Lake for dusk but despite staying until well after dark no cranes came in to roost.  We left at 19:00hrs and drove to Alexandria Forest along R319, N2 & R72 arriving at 2.30am.  Camped in picnic area on left about 2kms past the Forest Station.  84 species seen, the highlight of the day being the Whales and Blue Cranes. 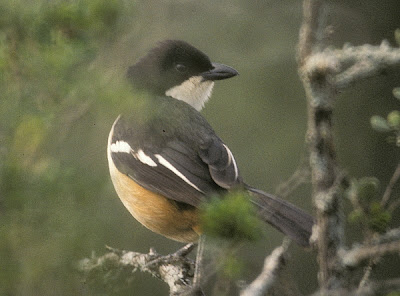 12 August 1991.  We spent most of day at Alexandria Forest where patches of temperate forest were surrounded by farm land.  We concentrated on a good trail behind the Forest Station (where we saw Brown Bush Robin and Olive Bush Shrike), the forest around the picnic site (with Brown Bush Robin behind toilets) and along the road past it.  We found another trail less than 1km past the picnic site which descended into a clearing (Lazy Cisticola).  We left Alexandria Forest at 16:00hrs to drive to Maclear (for Naudesnek Pass).  We cut up to Grahamstown and followed the N2 through Ciskei and into Transkei (where an informal border crossing) before turning off north on R396, the last few kms north of Maclear being on dirt.  We camped in layby 20kms north of Maclear, arriving at 23.30hrs.  It was very cold (below freezing).  47 species seen, the highlight of the day being 15 Chorister Robin Chats in Alexandria Forest.

13 August 1991.  We got up as it was getting light and continued along the awful dirt road (still R396) to Naudesnek Pass through generally birdless habitat but a few productive stops were made before arriving at the pass at 09.00hrs.  The pass, at 3000m, is the most accessible highland area in the southern Drakensburg and holds a number of specialties which are fairly easy to see.  Just over the pass there was a corrugated iron telephone box.  The stream and moorland behind it produced Orange-breasted Rockjumper.  We spent 3 hours around the pass, mainly along the stream by the phone box and 2-3kms to the north where we found Sentinel Rock Thrush and Drakensberg Siskin.  We decided to return along R396 to Maclear and N2 rather than risking Lower Pitseng Pass road which was reported to be worse!  We drove on to Weza but a combination of bad roads and traffic delayed our arrival until dusk.  We stayed in Ingeli Forest Motel at an expensive £12 each.  45 species seen, the highlight of the day being 3 Orange-breasted Rockjumpers at Naudesnek. 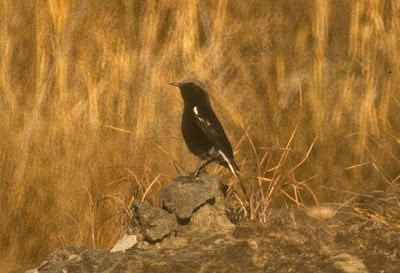 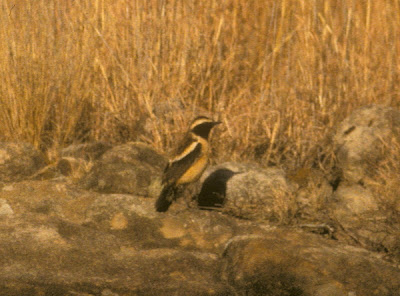 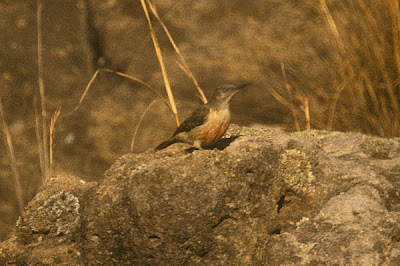 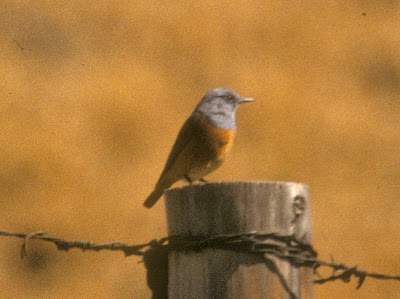 14 August 1991.  We spent the morning on the superb forest trail opposite Ingeli Forest Motel at Weza.  The trail ran up through indigenous forest for several kms before dropping down again (we returned at this point).  This was a very good site for Orange Thrush and we also saw Narina's Trogon, Starred Bush Robin, Yellow-throated Woodland Warbler & Green-backed Twinspot.  We left Weza at midday along N2 & R56 to Pietermaritzburg (passing through another informal border post at Umzimkulu) and proceeded to Hilton Protea Nursery, just off N3.  The nursery was small, more like a large overgrown suburban garden, but once found Gurney's Sugarbird was easily seen (we saw 5).  We continued on to the Southern Bald Ibis colony at Mooi River Falls for dusk (reached by dirt road north-east off the R622 17km east of Mooi River).  We walked across fields to the river and gorge.  At least 82 Ibis were present although few arrived after we did c30 mins before dusk.  We returned along R622 to Mooi River where camped in caravan park.  54 species seen, the highlight of the day being 2 Orange Thrushes on forest trail at Weza.

15 August 1991.  At first light drove 10km south on N3 to a large lake to the west where 35 Wattled Cranes were leaving their roost.  We then turned west on unnumbered dirt roads to Nottingham Road, north past Kamberg and to Giants Castle arriving at 10.00hrs.  Rest of day spent at Giants Castle climbing unsuccessfully along ridge trail for Yellow-breasted Pipit (but nice mountain views) and searching scrub for Bush Blackcap (equally unsuccessfully).  Spectacular scenery, being on the edge of the Drakensberg escarpment but not recommended in winter, apart from the views.  We returned to Mooi River after dark.  55 species seen, the highlight of the day being Wattled Cranes (35 off N3 and 2 between Kamberg and Giants Castle). 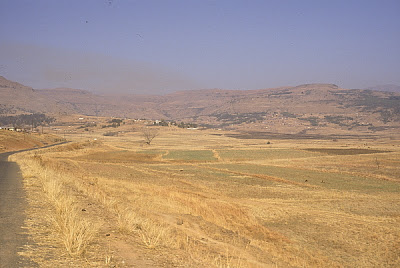 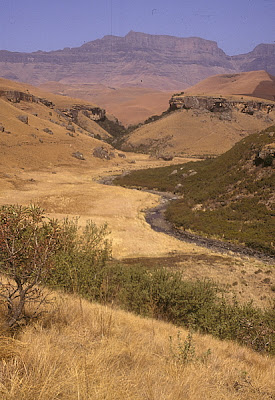 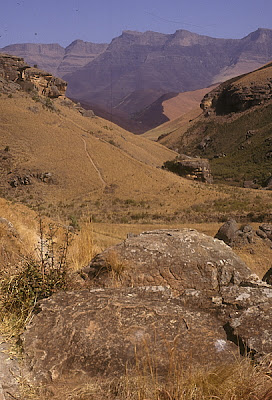 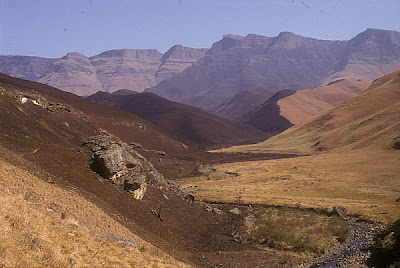 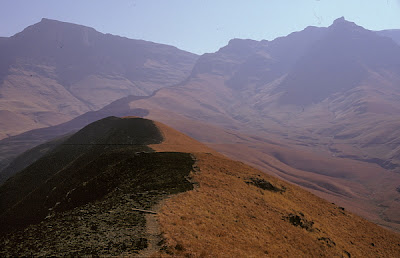 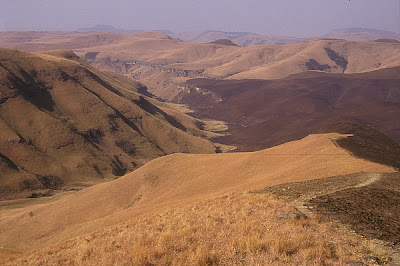 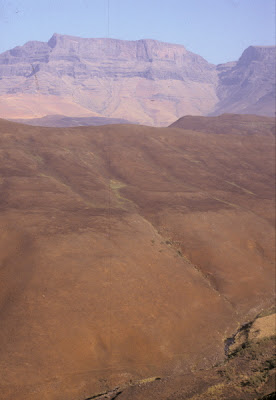 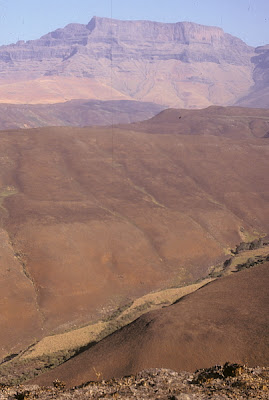 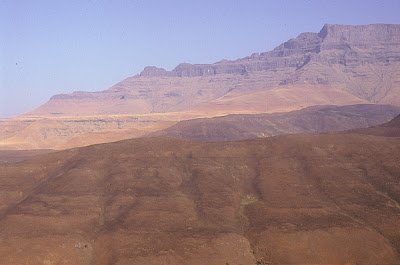 16 August 1991.  At first light we drove north along N3 to Frere then along R74 to Winterton.  We spent most of the morning on Winterton-Colenso dirt road - an area of dry grassland and rocky hillsides with limited cultivation.  We drove it twice to east and once to west but failed to find Blue Korhaan.  We did see White-bellied Bustards in grassland just to southwest of Winterton/N3 junction, 9 Southern Bald Ibis & 3 Stanley's Bustards on the Winterton-N3 section of the dirt road and c150 Blue Cranes in a large cultivated field on left of road c10kms before Colenso.  We drove quickly south down R74, N2 & R68 to Dhlinza Forest on edge of Eshowe.  We parked at Bishop's Seat and explored a few narrow trails but it was a very dark, foreboding, forest.  The atmosphere was heightened by our not arriving until an hour before dusk on a very gloomy day and finding a large area taped off as if the scene of a murder.  We were reluctant to stay overnight and left with only a Square-tailed Drongo to show for the visit.  We drove back to N2 turning north to Enseleni where we camped in the reserve car park beside N2.  It was very noisy but nice not to be cold!  54 species seen, the highlight of the day being c150 Blue Cranes in a large field c8kms west of Colenso.

Posted by richard fairbank at 13:50