Sunday 10 March 2013.  The highlight of a very cold two hour seawatch from the end of Shoreham Harbour, 06:45-08:45, was two close Avocets east at 07:33).  Also seen moving east were 15 Wigeon, 2 Shoveler (and 1W and 12 flying around), a Teal, 18 Common Scoter, 2 Red-breasted Mergansers and a Curlew.  No Brent Geese or gulls were moving which was a bit of a surprise but there was a steady passage of at least 400 auks heading west.  Most were on or near the horizon with the closest 25 identified as Razorbills.  Three Red-throated were also identified heading west.  A Mallard was on the sea, at least 8 Purple Sandpipers on the inner arm and a tight group of 26 Turnstones roosting on the beach.

A late afternoon visit to the Adur for an hour at low tide was no warmer.  Again two of about 100 Herring Gulls were colour-ringed North Thames birds,  AX8T and TM9T and both different from yesterday's. Lots of Black-headed (1600+) and Common Gulls (700+).  I didn't manage to pick out any Mediterranean Gulls but a pink black-headed was some compensation. 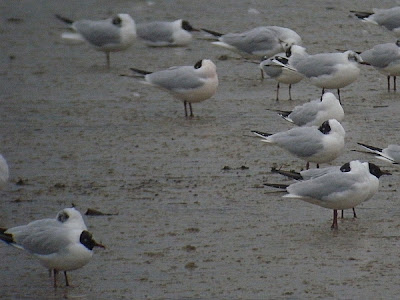 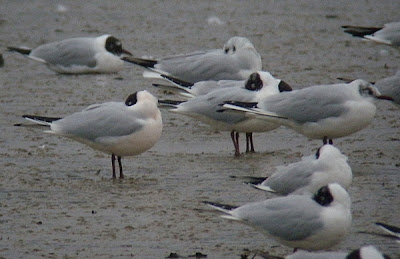 Saturday 9 March 2013.  I resisted the temptation to go on a Dipper hunt in West Sussex.  The unhelpfulness of those party to the report made the cynic in me wonder about motives and the original sighting. A 2 hour seawatch from the end of Shoreham Harbour was surprisingly enjoyable despite murky conditions prevailing for much of it.  A Peregrine was on the Power Station chimney, when it was visible, 12 Purple Sandpipers on the inner pier at high tide and an apparent Scandinavian Rock Pipit nearby.  Easterly passage included 3 Red-throated Divers, 420 Brent Geese, 50 Wigeon, 2 Common Scoter, 9 Oystercatchers, 73 Mediterranean Gulls and 400+ Black-headed Gulls while 20 Meadow Pipits and 3 Pied Wagtails came in.  Most of the Mediterranean Gulls were coming out of the murk quite high and were first/only detected by call.  They included flocks of 31, 14 and 10.  An afternoon visit to the Adur was disappointing in that only one Mediterranean Gull was found amongst about 900 roosting gulls, along with two North Thames Herring Gulls, WY5T and an old favourite SH5T. 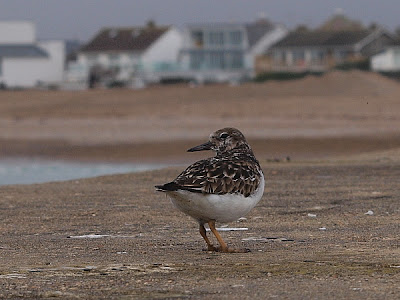 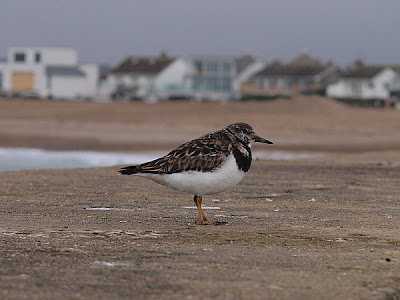 Monday-Friday 4-8 March 2013.  1-2 Peregrines on the Power Station chimney and a Rock Pipit singing from near Carrot's Cafe most days.


Sunday 3 March 2013.  An hour at the end of the harbour produced 9 Red-throated and 2 unidentified Divers, 35 Gannets, 1 Curlew, 26 Kittiwakes and 34 Razorbills with 60 more distant auks left unidentified.  NA great Crested Grebe was the only bird of note on the Adur while a walk around Sheffield Park with Meagan produced heard only Kingfisher, Great Spotted Woodpescker, Grey Wagtail and Nuthatch and a flyover Siskin.

Posted by richard fairbank at 19:30