Introduction.  I was fortunate to be invited on a trip to Kenya over Christmas 1977 (see http://birdingneversleeps.blogspot.co.uk/2012/12/kenya-december-1977.html).  It was very successful, if a rather eye-opening experience, and one Peter Walton and I were keen to repeat the following winter.  In Kenya Chris Heard captivated us with several tales of his time in Thailand the previous winter and it seemed the ideal destination – it was relatively cheap, safe and had plenty of exotic birds including several sought after Siberian species that wintered there.  Andrew Moon was very keen on the idea as was Steve Whitehouse and the four of us booked flights and assembled what information we could.  This blog is taken from an old report I recently found and a few surviving slides taken on the trip, some which have aged less well than I have in the intervening years.

17 December 1978.  We landed at Don Muang airport about 08:00 after a comfortable Thai airways flight from Heathrow.  I didn’t have to wait long for my first new bird, seeing Black Drongo from the plane as we taxied towards the terminal.  We collected our bags, changed money and got a taxi into Bangkok where we stopped outside the first Car Hire firm we came to (Bangkok Car Rental in Wireless Road, there were none at the airport).  We hired a white Toyota Corolla for the incredible price of £50 each for a month.  Sorting tout the paperwork was interrupted by seeing Brown Flycatcher and Indian Roller, much to the locals amusement.  Andrew drove down the road to Lumpini Park where I saw 12 new birds in two hours including Brown Shrike, Shikra, Common Iora and Zebra Dove.  Also 10 Yellow-browed Warblers.  We then drove through Bangkok towards Bang Poo making several roadside stops on the way.  We spent the rest of the day at Bang Poo seeing lots of waders including Lesser Sand Plover and Red-necked and Long-toed Stints on the saltpans, Brown-headed Gulls from the pier and nothing during a venture into the mangroves.  Back at the car the key broke in the padlock of a security device attached to the brake pedal.  Various attempts to undo it failed, it was now dark and we were being bitten by mosquitoes – not the finish to the day we’d hoped for.  Andrew considered the car was drivable, although with only limited use of the brakes as the lock was still attached to the peddle.  We decided to head towards Bangkok, at least until we reached the first place big enough to have a garage.  We spotted a hardware store in the first town and after much hassle managed to saw the padlock open.  We continued through and north of Bangkok, intending to camp near Chang Rak, but took a wrong turning and ended up near the airport with the police looking us over. 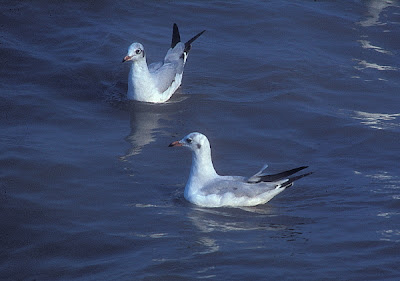 18 December.  I was up at dawn but that was still ten minutes after Steve.  Wandered around the marshy area where we’d camped seeing Black-browed Red Warbler and Siberian Stonechat.  We drove back into Bangkok stopping at a temple on the way in.  We went to the Tourist Office to find out how to get to Old Custom House Lane where we hoped to meet Dr Boonsong, to whom we had written of our visit.  We met some Australian birders there who told us they’d seen a Koel in Bangkok Zoo but that Dr Boonsong was away until that evening.  We went to the zoo seeing the Koel and a few other nice things.  Nothing compared to Orange-headed Ground Thrush and Banded Pitta in one of the cages, very gripping.  We tried again to find Chiang Rak but got it wrong again despite it being daylight.  We stopped at an area east of Rangsit after seeing Pied Harrier and Bronze-winged Jacana from the main road.  In a marshy area around some paddyfields a few warblers were flicking around so we put up a mist net.  It seemed to no avail but as the sun was setting Steve shouted ‘male Rubythroat’.  Amazingly the first bird we’d caught.  We took some photos in the car headlights and released it.  We headed back to take the net down when Peter walked up saying there appeared to be a cisticola in the net but it was too large and in torchlight my suspicions were confirmed - a Pallas’s Grasshopper Warbler.  Back at the car we identified it as being the central Asian race as it had grey fringes to the crown feathers.  When released it ran off along the ground, an amazing finish to the day.  We returned to Bangkok to see Dr Boonsong and spent a very rewarding 90 minutes with him getting lots of useful information on where to go and what to look out for.  He also very kindly gave us an introductory letter to smooth our way.  The only down side was him telling us we had no chance of seeing any pittas as they were very secretive and were silent at this time of year.  We drove south, down the peninsular, until the early hours and camped by the road.

19 December.  The first couple of hours around the camp produced five new birds including the excellent Little Green Bee-eater but when we were ready to move on the car wouldn’t start.  Increasingly desperate attempts culminated in Steve really revving the engine and blowing off the oil filter.  We were towed to the nearest garage where, after about an hour of trying various filters and wasting a lot of oil, the best they could do for us was to put back the old filter and tighten it up.  At least the car now started.  We drove to the next down with a few stops of roadside birds (Ashy Wood Swallow being best).  Here we repeated the oil filter procedure and eventually a replacement was found.  At this stop we tried some Thai food but not liking anything spicy I couldn’t get on with it at all – really bad.  We continued driving south with a few stops, the longest north of Prachuap Khiri Khan produced an amazing day roosting Brown Hawk Owl.  We continued driving south after dark, breaking for a meal.  We eventually stopped to camp at about 02:00 about 20 kms south of Ranong.  The heat was amazing although it wasn’t until we got out of the car that we realised how hot and humid it was – the car’s air conditioning must have been working overtime.  The sounds from the jungle at night were amazing too.

20 December.  We were up before it was light enough to see anything, intrigued by the array of calls.  I saw 17 new birds in 3-4 hours including Red-wattled Lapwing and our first malkoha, leafbird and minivet.  We continued driving south stopping in suitable habitat and seeing lots of new birds including the stunning Yellow-breasted Flowerpecker (as colourful as an American warbler), Fairy Bluebird and Greater Goldenback (by my reckoning my 1000th species).  We explored some dense jungle south of Khuraburi seeing White-rumped Shama but were probably making so much noise crashing around that anything else was long gone.  Our first Great Hornbills were amazing and further south (just north of Phuket) we saw Pintail Snipe and Grey-headed Lapwing by the road.  The latter was much further south than Boonsong’s Bird Guide of Thailand suggested it normally occurred.  Here I also rather carelessly flushed three plovers, two were Pacific Goldens but we couldn’t identify the other leaving lingering doubts that it might just have been an Oriental Plover.  We ventured into a rubber plantation but it was very poor and saw a Greater Coucal from the road (the alternative name of Crow-Pheasant seemed quite apt).  After dark we drove south onto Phuket Island.  We stopped at a local Police Station where Peter got directions to Klong Nakong National Park.  One of the rangers was still about, or our approach had woken him and he’d come to investigate - it wasn't much after 20:00!  Peter showed him our letter of introduction from Dr Boonsong and when asked where we were staying told him we had tents.  Asking what that was Peter replied that ‘a tent is like a little house’ and we camped on the edge of a rubber plantation by the National Park entrance.  In hindsight I think we misunderstood the offer of accommodation – at this stage we didn’t fully appreciate how powerful Dr Boonsong’s letter was!  Unfortunately Andrew lost his camera rather putting a dampener on the day.

21 December.  I saw two new phylloscopus warblers in the rubber plantation where we'd camped, but little else and we quickly drove back into the National Park where we spent all morning.  I found it very hard work with spiderhunters shooting all over the place unidentifiably.  Highlights were wintering Eye-browed Thrushes and a brilliant view of a Black Baza at the top of the park, a stunning raptor and not a family that usually impresses me.  We drove south stopping on the coast to the east of Phuket town where on a muddy beach we saw a good selection of waders including 30 Terek Sandpipers.  We arranged a boat trip off shore from Rawai Beach for a couple of hours and saw Lesser Frigatebirds and a White-bellied Sea-Eagle for an exorbitant fee.  We left Phuket and continued south towards Krabi camping on the roadside 45km north of the town.

22 December.  We woke to find we were outside another rubber plantation. It was as birdless as the others although we managed to see Abbot’s Babbler.  Andrew sussed out a couple of new prinias while I was taking down the tent.  Further south we spent 2-3 hours on a jungle track about 20 kms north of Krabi.  This was excellent with a superb Red-bearded Bee-eater, Streaked Wren-Babbler and a white male Asian Paradise Flycatcher.  Krabi itself was pretty grim although good for scavenging Brahminy Kites.  There was a furious rainstorm while we were lunching.  We then found the sea west of Krabi by taking some rough tracks.  Here the scenery was amazing and we saw Greater, Lesser and Malaysian Sand Plovers.  We borrowed an old canoe to cross a river and after an hour’s birding returned to find it had gone.  It was not particularly surprising as we’d ignored a guy shouting at us when we were nearly over – it had appeared to be abandoned, honest.  Luckily some fishermen a few hundred metres down the beach had a motorboat and gratefully received 10 baht (25p) to run us back across.  We saw Large-tailed Nightjar at dusk in the car’s headlights and drove back north, camping by the road about 15km north of Krabi. 23 December.  After the first half hour around our campsite we spent all day in the jungle we’d previously visited about  20 kms north of Krabi.  It was reasonably pleasant on the track in the jungle but a ride cut for pylons was like being in an oven it was so hot.  We saw lots of good birds, the best being Raffle’s Malkoha, White-whiskered Tree-Swift, Dark-throated Oriole and Tickell’s Niltava.  The lure of northern Thailand and hopefully wintering Sibes was, however, proving too much for us.  At 19.30 we left and started the long drive north, continuing all through the night.
24 December.  We'd reached Prachup by dawn and continued driving north pretty much continuously all day and night.  We stopped by the road at a good looking wader area south of Bangkok and some marshland to the north.  Otherwise we only stopped to change money at Bangkok Airport, drivers and for fuel.  I saw two new birds including Jerdon’s Starling while we were travelling at 70 mph.  A bad but necessary day.

Posted by richard fairbank at 13:33