15 December 2013.  A day with John King in East Sussex.  We started at West Rise Marsh where the Smew was moving around a lot, but always keeping its distance.  On one occasion it flew off NW almost out of sight before returning.  Shinewater clearly not to its liking.  a large number of gulls were bathing on West Rise when we arrived but they seemed very jumpy and kept flying off, returning in ever diminishing numbers.  I saw an adult Yellow-legged but it flew before John could get onto it while a putative third-winter Caspian that we both saw flew before I could digiscope it.   Next Prince's Park, Eastbourne where the Black-throated Diver was spending more time above the water than below it although my attention was first drawn to a dark juvenile gull on the water.  It soon flew off but looked less interesting in flight.  Three hours with the Exceat gull flock, which at its peak probably numbered 1500, produced a bird we were as happy as we could be was a large (male) adult Caspian Gull without seeing critical primary detail or getting any sort of images.  It had a small very white pear-shaped head, bullet hole dark eye, long parallel washed out bill, bumpy neck, dark mantle, pale long thin legs, long primaries and the appearance of a ventral bulge.  One or two other potential adults (darker mantles, white heads, small dark eyes) were seen along with a potential third-winter, an adult Yellow-legged and 3-4 apparent argentatus Herring Gulls but viewing conditions were poor.  When the flock was at its closest it was flushed by day-glow dog-walkers and again by an ambulance on the A259 when a lot dispersed and we called it a day.  We called in at Newhaven on the way home seeing 5 Eider in the harbour.  All in all a rather frustrating day, a selection of rubbish pics follow: 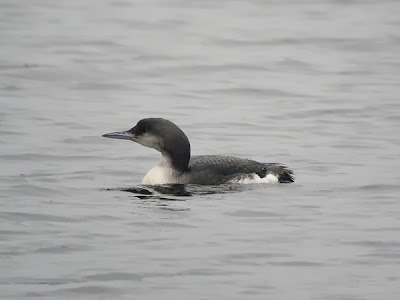 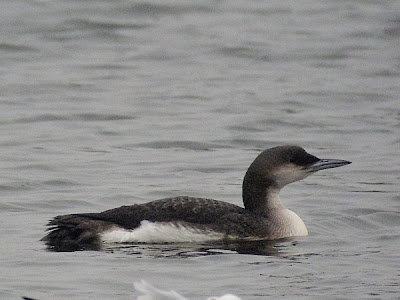 14 December 2013.  After a morning on form filling and other chores, Megan and I walked around Beeding Brooks where a flock of 70 Fieldfares were the only birds in evidence other than 14 Grey Lag Geese.  I then went down the Adur for the low tide pre-roost gathering of gulls.  about 500 birds were present, predominantly Herrings.  One caught my eye being long winged, white headed and dark eyed but seemed to have rather a bright bill and perhaps not a dark enough mantle for anything more interesting while critical detail of primary pattern was not noted.  While watching this bird I noticed first one then three Goosanders in the river.  They were much more fun despite the light having just about gone.  Worst pics ever follow.

9-10 December 2013.  In the gloom, two Peregrines on Southwick Power Station on my way to work.
Posted by richard fairbank at 21:09