This blog continues my account of a trip to Ecuador with Marc Brew, Jon Hornbuckle and Rod Martins and very professionally led by Gabriel (Gabo) Bucheli. Unless stated the photos in this blog were taken (mostly by me) with Jon's Canon Powershot SX50.

30 January (continued).  We met Thierry Garcia, a very likeable ex-pat Frenchman, at the only obvious hotel in Loreto at around noon and had a packed lunch in their lobby, our wellingtons which we’d not had chance to clean leaving a trail of dried mud.  We got the things out of Gabo’s vehicle for Rio Bigal having repacked the previous evening so as not to have to take at least half of our stuff - I’d put a bag of the things I might need in Rod’s rucksack.  A large pickup taxi was summoned and we all piled in with our stuff in the back.  Thierry and Cesar, his cook, were dropped at the local market to buy final provisions while the taxi driver took us to his house to pick up a large gas cylinder.  We collected Thierry and Cesar who joined the bags of supplies and Gabo in the back giving Jon a cardboard tray of eggs to nurse.  We headed east out of town and after a few kms turned north onto a dirt road which we followed for twenty minutes or so.  Two mules and their muleteer were waiting to take our gear and supplies the final 5-6 km to Rio Bigal and while they were being loaded we started walking.  The track immediately became very muddy, treacherously so in places, and it was clear why we could not have driven any further.  Most of the walk, which took about two hours, was through cleared areas with scattered trees that did not seem particularly productive although we saw Green-backed Trogon, Many-banded Aracari and Violaceous Jay.  We did not enter decent forest until shortly before the turn off to the lodge, having been passed by the mules a few minutes earlier.  The turn-off was not at all obvious, a narrow almost invisible trail despite the fact that two mules had just gone down it.  So much so that Jon, who was some way ahead at this stage, walked right past it, Gabo catching up with him 0.5 km further on.  The trail was dark, muddy and steep in places but after five minutes we came to the lodge set in a small clearing.  It was very basic open ended affair with a downstairs living area, upstairs sleeping area where Thiery set up tents, mattresses and sleeping bags and adjacent shower and toilets.  The setting was brilliant, just my sort of place to be right on site.  After sorting out our stuff we headed back to the entrance track and continued further down it for the final hour or so of daylight seeing Blackish and Western Wood Pewees and Lafresnaye’s Piculet.  We had an excellent meal and an early night. 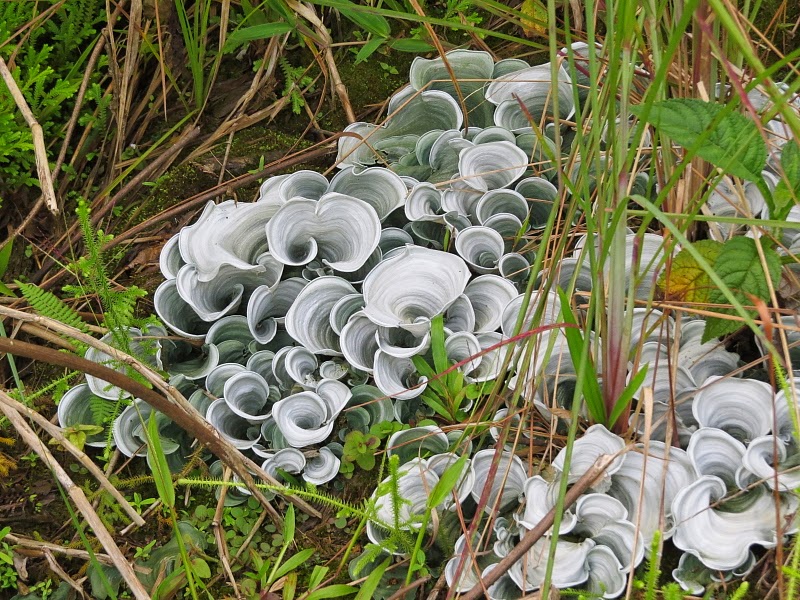 31 January.  After an early breakfast we spent the morning dodging showers as we birded along some of the narrow trails at Rio Bigal.  They included the intriguing Hot Lips trail, named for a plant.  Our main target was Pink-throated Brilliant but they were not playing ball and a probable flypast for some was the best we managed.  A male Ecuadorian Piedtail was good consolation for me and I also saw Sooty and Spot-backed Antbirds, Amazonian Umbrellabird and Striped Manakin.  We returned for lunch and in the afternoon tried our luck further along the entrance track, first calling in at a shelter where we disturbed a roosting Blackish Nightjar.  Pink-throated Brilliant had been seen on some flowers a km or so along the entrance track but few hummers were in evidence.   One that was was a male Gould's Jewelfront - the same genus as the brilliant and even better looking.  We had spread out a bit when Gabo got a good view of a perched Pink-throated Brilliant but it immediately flew (I heard it go) and with no flowers in the immediate vicinity did not return. Disappointing but it would have been more so had I missed the jewelfront.  The track was more open than the trails and we saw Paradise, Golden and Masked Tanagers and Moriche Oriole while I had a brief view of a male Fulvous Shrike-Tanager.  A vocal Musician Wren was tempted to fly across the track but it dived into thick vegetation where it was impossible to see. After another good meal and as it was not raining Jon and I went out spotlighting with Thierry and Gabo.  By walking slowly and looking carefully at hanging leaves Thierry pointed out lots of insects and bugs, a thin snake and an impressive Monkey Frog but foolishly I had not thought to take Jon's camera. 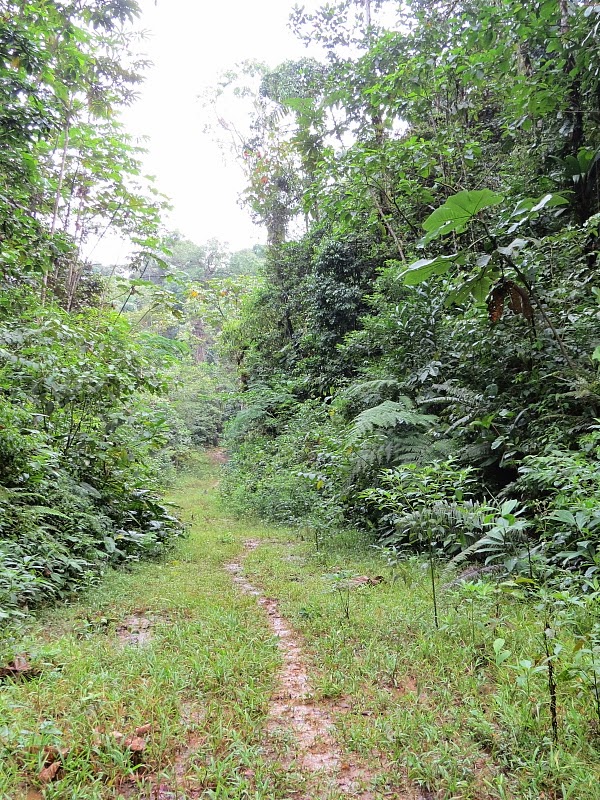 1 February.  We spent a very wet morning along the track again hoping for Pink-throated Brilliant with Jon and Marc being successful.  The Blackish Nightjar was in its usual place and I managed to get some photographs without disturbing it.  The afternoon was not quite so wet and the rain even stopped before it got dark although there was still not a lot of activity.  I did see a female Wire-crested Thorntail, Ornate Flycatcher, the usual Pewees, Golden-headed and Blue-rumped Manakins and Green & Gold, Swallow and Opal-crowned Tanagers.  As the light was fading I was watching a Yellow-throated Bush-Tanager in some dense vegetation (2-3 had been in the lodge clearing on previous evenings).   It was moving slowly then stopped in a vertical position with its head pointing down.  It remained visible but unmoving in this position until the light completely went at least fifteen minutes later.  It seemed certain that it had gone to roost.  Thiery showed us some of the photos taken by camera traps taken near the lodge.  Amongst a selection of very impressive animals - Jaguar, Spectacled Bear, Tapir - he had some of Grey-winged Trumpeters.  Theirry told us they were a nuisance setting off his camera traps and sometimes when he was at the lodge on his own he had seen a group walking up the path and into the clearing.  It was one of my most wanted birds but not something I thought I had a realistic chance of seeing so hearing that they were fairly common in the area was not something I wanted to know when we were leaving.  I had not thought to ask Theirry about trumpeters and was now regretting it, not that two days creeping around his trails was likely to have been successful (a trumpeter will always see me and scarper before I see it).  Sadly our stay (and our time with Gabo) was almost over as we had to leave Rio Bigal at first light.  It was a very nice area with an excellently positioned lodge but we had not stayed long enough to do it justice, although long periods of heavy rain had not helped. 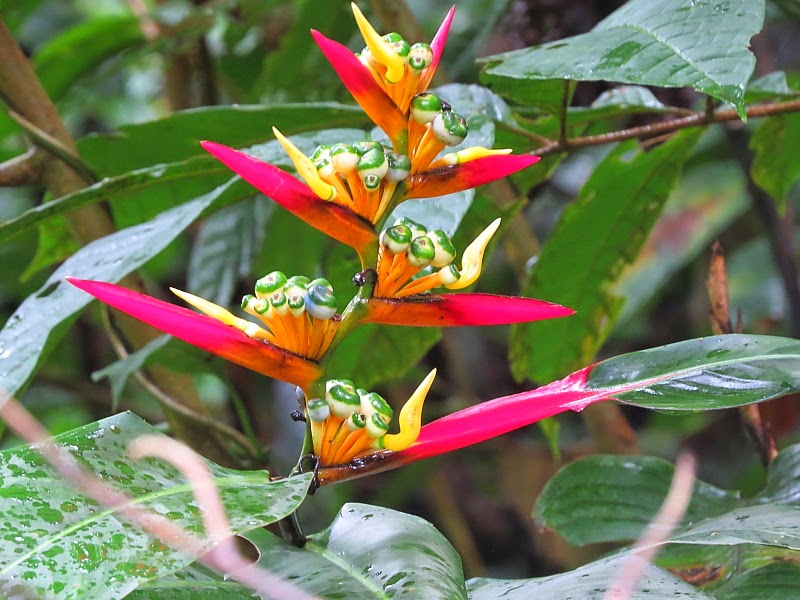 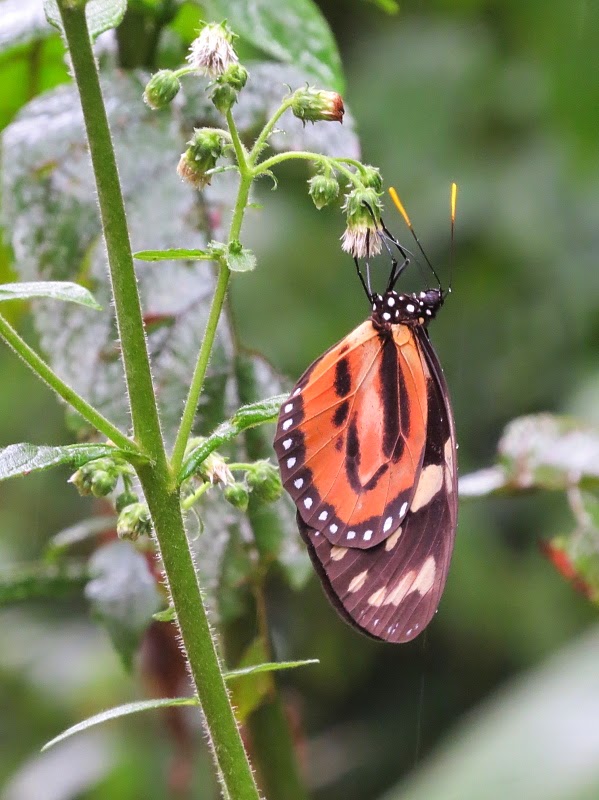 2 February.  We had breakfast before it was light and left our bags in the lodge.  We were going out as we had come, us walking the entrance track to meet a taxi at 08:00 and our bags going by mule.  We said goodbye Thierry and Cesar, excellent hosts, who were staying to pack things away and left Rio Bigal as it was getting light at 06:15.  From the track we saw a noisy, mobile group of at least 17 Military Macaws, Blue-throated Piping-Guan, Speckled Chachalacas, Chestnut-eared Aracari and 100+ White-collared Swifts.  After an hour or so a single mule and rider passed us, going to collect our bags.  We reached the pickup point at 07:55, the mule with our bags at 07:58 and the taxi at 07:59.  Impressive.  We stopped on the way back to Loreto for a White Hawk and once there quickly transferred into Gabo's vehicle.  We had two hours to get to Coca which was an hour's drive away but wanted another look for Brown-rumped Foliage-gleaner on the way.  We tried the same area as previously but with no more success.  We arrived in Coca dead on 11:00 but some ATM difficulties and a road being dug up requiring us to walk the last 200m meant we did not get to the rendezvous until 11:20.  No rush as another passenger was awaited and their flight had been delayed.  We met Domingo who would be our guide at Sani Lodge and said a sad farewell to Gabo who had been excellent and was now driving back to Guango to stay with his brother and then Quito where he was meeting two more clients.  It was no surprise that Gabo was much in demand being a very good birder, organiser and driver, very easy going and a thoroughly nice bloke too. 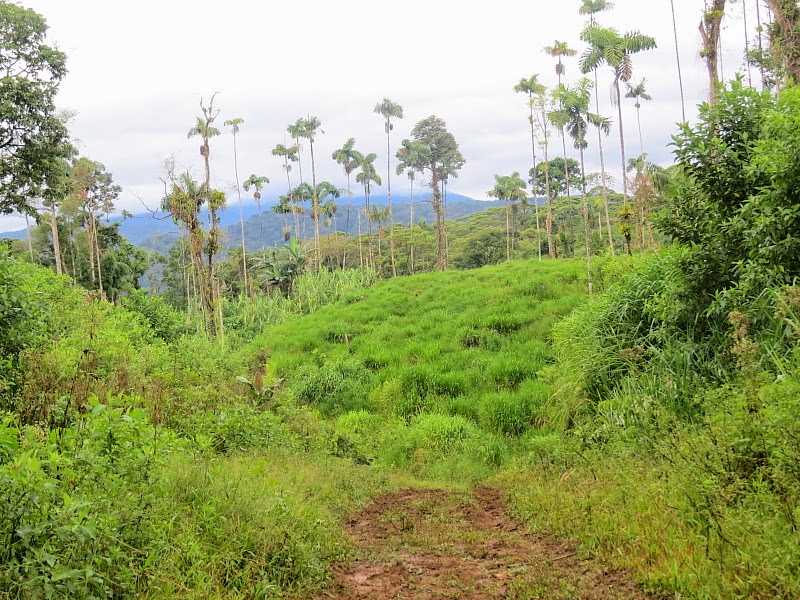 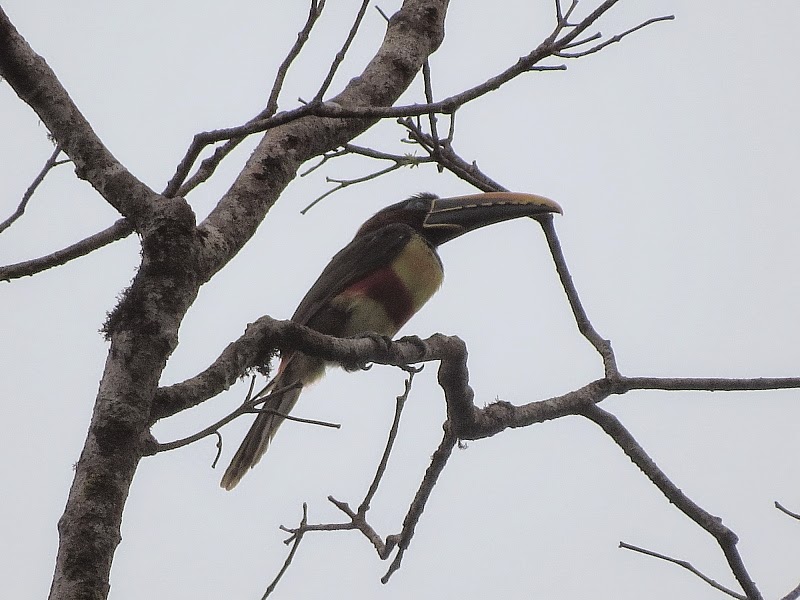 Posted by richard fairbank at 19:40