We stayed at the Days Inn in East Flagstaff for three nights.  It was a handy staging post between the Grand Canyon and Monument Valley but also had a few attractions nearby. One of the birds I most wanted to see was Mountain Bluebird which I was in range for and an online search revealed the ebird.com website which enables one to search for sightings. Several recent records of Mountain Bluebird came up in the Flagstaff area including a couple from Picture Canyon which was only about 10 minutes drive down the old Route 66 from where we were staying.  I left soon after it was light and spent two hours birding in pleasant open woodland before heading back to join the family for breakfast. I had seen a Merlin, Mountain Chickadee, lots of Steller's Jays, 3 Evening Grosbeaks and 4 Cassin's Finches but no bluebirds. I felt I had probably taken a wrong turn early on as I left the only stream on what appeared to be the main trail and found no sign of a canyon. The main drawback of the ebird site was it not being very specific about directions or where birds were seen once there. Returning to the car I encountered some other birders but unfortunately they were not locals but first time visitors from Florida and knew the area no better than I did.
After breakfast we drove west about 40 miles to Meteor Crater, an impact site almost a mile across dating back 22,000 years.  It was private and expensive - entrance was almost as much as the Interagency Annual Pass which covered all National Parks and Monuments. It was impressive to see though, and would have been more so had one had been allowed into it. 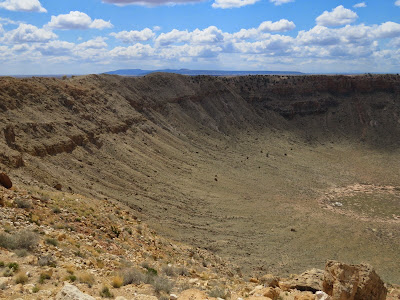 We returned to Flagstaff and I was dropped at Picture Canyon at 13:00 while the rest of the family went into town.  Megan came back to collect me at 17:00 giving me four hours to further explore the area.  This time after covering some of the same ground I switched my attention to smaller trails and eventually found one that rejoined the stream which I followed to the edge of the woodland.
I returned along the stream but ran out of time before finding a way along the canyon proper, or any petroglyphs.  It had been a very enjoyable afternoon despite heavy showers with male Mountain Bluebird the obvious highlight but also 9 Western Bluebirds, Loggerhead Shrike and 12 Pinyon Jays.

The next morning I returned to Picture Canyon for another two hours before breakfast.  This time I concentrated on the canyon and stream area, finding my first Black-headed Grosbeak and, amongst others,Steller's and Pinyon Jays and a Yellow-rumped Warbler. 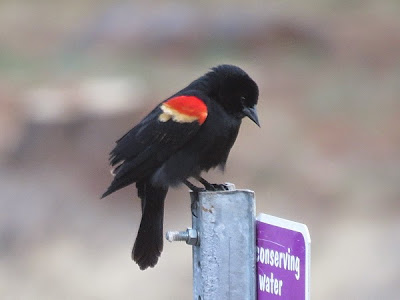 I returned for breakfast and afterwards we visited Sunset Crater National Monument and its lava flows 15 miles north of Flagstaff.  It is the youngest of the San Francisco volcanos but hasn't erupted for nearly 1000 years.  Few birds were seen but included another Yellow-rumped Warbler and 7 Cassin's Finches. 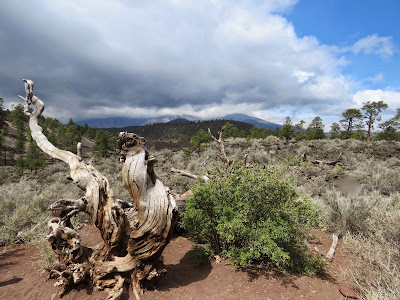 We left Sunset Crater and continued on to much more open country and the ancient ruins at Wupatki National Monument.
We returned to Flagstaff and in deteriorating weather Megan and I made a final attempt to find the petroglyphs in Picture Canyon.  Megan soon found some, on rocks I had walked past more than once!  We also saw the Mountain Bluebird in its usual area (Megan agreed that she had never seen a bird such a stunning blue), Belted Kingfisher, Cassins Vireo, Western Bluebird and 30 Cassin's Finches.

Posted by richard fairbank at 22:36