Introduction.  This blog recounts a visit to New Zealand with Nick Preston in August 1996.  It is based on a report I wrote soon after with some additional and perhaps unreliable memories and is illustrated with digitised prints taken with a basic Pentax camera and low magnification zoom lens. Many of the birds seen were very confiding although that is not reflected in the few bird photos I managed to take.

Nick arrived in New Zealand the day before me, having been in Queensland, Australia for the previous two weeks.  We used my sister Ruth and brother-in-law’s house, conveniently located in Titirangi, Auckland as a base and borrowed one of their cars for a nominal charge.  We covered much of New Zealand and thought it a brilliant country.  So much so that, ignoring birds, it is the only place I have visited where I’d probably prefer to live than in England.

Away from Auckland we usually camped or slept in the car.  Exceptions were on Tiritiri Matangi Island where basic accommodation was provided and Stewart Island where we stayed in an equally basic Backpacker’s.  Both were very moderately priced.  It was necessary to take supplies to Tiritiri Matangi Island, which Ruth had kindly ought for us, but elsewhere snack-type food was readily bought.  Most evenings a local fish and chip shop was visited and, almost without exception, these were excellent.

August, being mid-winter, is not an ideal time to visit.  With less daylight, likelihood of poor weather and birds not so vocal we allowed longer in New Zealand than perhaps one would have done in summer.  A few seabirds are more regular at this time of year but others move out of New Zealand waters.  Some of the endemic species are harder to find in winter and we failed to see Rock Wren, not helped by the sites we had for them being under snow.  Attempts to look for Great Spotted Kiwi near Punakaiki were also thwarted by the access road being flooded, although apart from this we were generally lucky with the weather, in particular by leaving the west coast of South Island ahead of blizzards which closed some of the roads we had used a few days earlier.

7 August 1996:  After 28 hours of flying (via Sydney) I arrived in Auckland early in the afternoon and was met at the airport by Nick who had borrowed my sister Ruth’s car.  We spent a couple of hours at nearby Mangere Treatment Works before going to my Ruth’s house in Titirangi.  The tide was rising while we were at Mangere and our visit culminated with a flock of 80 Wrybills roosting on a small island in one of the pools which gave good views from the road.  33 species were recorded, the other highlights being our first Paradise Shelduck, Australian Shoveller, South Island Pied Oystercatchers and Red-billed Gulls and 30 rather distant Royal Spoonbills.

8 August 1996:  After a quick breakfast, accompanied by the ubiquitous Grey Fantail, we packed the supplies bought for us by Ruth and drove to Gulf Harbour Marina, Whangaparaoa to get the excursion boat to Tiritiri Matangi Island.  Most of the 20 or so visitors were going across for a day trip but Ruth had booked us in for two nights.  The journey on a fast boat took approx. 30 minutes but the speed of the boat made birding difficult and only an Australian Gannet and a probable White-fronted Tern were seen.  Tiritiri is a truly magical place and we were overwhelmed with birdsong on our arrival.  We were met just above the jetty by 3 Takahes and had seen several Saddlebacks, Tuis and Bellbirds on the short walk to the accommodation.  This was very adequate ‘bird observatory’ standard with a communal kitchen.  We spent all day walking round the island which is about 2.5 kms long and 1 km wide with replanted natural forest in valleys on the southwestern side, an insight into what native New Zealand was like.  At dusk Little Blue Penguins appeared offshore (having seen 3 in burrows earlier) and after dark 3 Grey-faced Petrels were seen around their nesting area.  Sixteen Little Spotted Kiwis had been released on Tiri during the previous three years and we were very keen to see one.  After a simple meal we walked around until nearly 01:00 by which time we were both finding it very hard to stay awake – at one stage I laid down on a section of boardwalk and could have easily fallen asleep. We heard four, one of which was very close, although frustratingly not close enough for us to see it.  We recorded 40 species of which 15 were new for me.  Takahes were the most impressive (a total of 7 being seen and other highlights were New Zealand Dotterel, Red-crowned Parakeet, Whitehead, New Zealand Robin and Stitchbird. 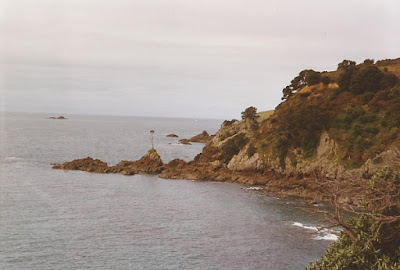 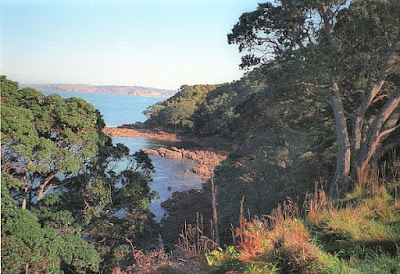 9 August 1996:  Another enjoyable day on Tiri.  Again 40 species were recorded and again Little Spotted Kiwi was only heard, although by evening it was raining and we only heard one twice in nearly 2 hours.  New Zealand birding presents significant problems for the purist.  The inability of many native species to cope with predators (in particular possums) introduced by early European settlers has devastated many of their populations.  To ensure their survival the Department of Conservation reintroduces native species onto small, predator-fee, offshore islands.  Visitors are allowed on a few of them (Tiri being the most accessible) and as these are often the only places these species can be seen we had no qualms about counting them.  We had hoped to visit Kapiti Island which is also home to similar introductions to those on Tiri, although some have been established for longer.  This was not possible as no access to the island was allowed at the time of our visit as it was being blitzed with rat poison.  Fluttering Shearwater and Morepork were new birds for me, the later some compensation for drawing a blank again with Little Spotted Kiwi.  Other highlights included 45 Little Blue Penguins (brilliant), 38 Saddlebacks, 11 Stitchbirds, 13 Whiteheads and 3 Takahes. 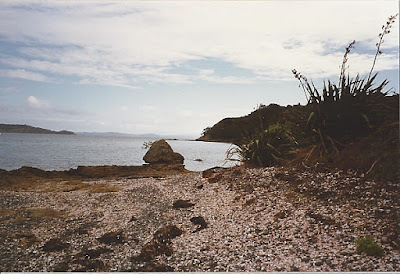 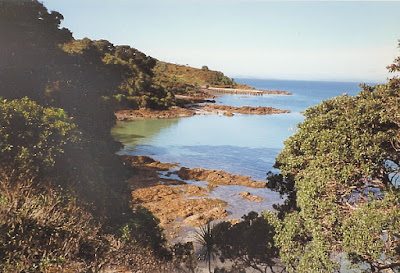 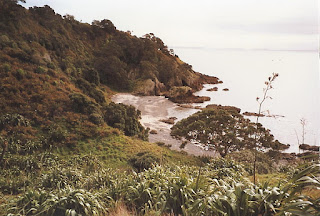 10 August 1996:  After a quick last look around Tiri we paid our bill in the shop, being joined while doing so by a Takahe!  We returned to Gulf Marina on a boat which had been chartered to bring a walking club over.  The fast crossing produced poor views of 100 Fluttering Shearwaters.  We drove back to Titirangi stopping off at Pollen Island (in south Waitemata Harbour, west Auckland) where we saw a Fernbird with little trouble, other than plodging through mangroves to reach the site, and heard at least one other.  We had another very pleasant night in Titirangi preparing for the main part of the trip.  I recorded 35 species, the highlights being the Tiri specialities and Fernbird.
11 August 1996:  We left Auckland soon after dawn and drove for an hour or so south to Island Block Road just off route 1 near Meremere.  The extreme western part of the road was a site for Australian Bittern and walking along the southwestern bank of the river where it is crossed by the road we saw 3 with ease.  We then drove on to Miranda and saw a reasonable selection of waders, the best being 7 Double-banded Plovers, 4 New Zealand Dotterel and 140 Wrybills.  Other more notable birds included 3 Royal Spoonbills, a Cattle Egret, 2 introduced Eastern Rosellas and our first good look at White-fronted Terns.  With the tide falling we decided to cut short our visit at Miranda and drive to Rotorua in the hope of seeing New Zealand Little Grebe before dark, and thus save half a day on the itinerary.  The drive was fairly uninteresting and took 2-3 hours but we arrived with an hour of light left.  The point north of the Polynesian pools complex gave excellent views of 6 New Zealand Little Grebes, 1500 New Zealand Scaup and our first Black-billed Gulls (which we may have overlooked previously).  After an excellent fish and chips we drove to Pureora Forest Park.  We initially had difficulty finding Plains Road, our best Kokako site, but did so eventually.  It was clearly too cold to sleep in the car and we put the tent up in record time.  47 species were recorded, the New Zealand Dotterel being best.

12 August 1996:  We awoke at dawn and almost immediately heard a Kokako calling nearby.  We hurried into the forest and were soon rewarded with reasonable views of it coming in to investigate our tape recording.  The rest of the morning was spent walking along Plains Road and at the Observation tower.  Notable birds included 3 excellent Riflemen, 8 Tomtits, 4 Kakas (though in silhouete only) and 2 non-introduced Whiteheads.  We then drove to the Manganuiateao River northwest of Raetihi.  Stopping to scan from the road along a 5 km stretch of river beyond Orautoha we found 3 pairs of Blue Duck which were excellent.  This was after a false start when, at the first view of the river, I spotted two distant birds tucked up asleep under a river bank which looked ‘good’.  They turned out to be Mallard but our disappointment was short lived when a pair of Blue Duck suddenly appeared on the rocks below us - presumably having drifted downstream while we were intent on studying the Mallard!  We left this area late afternoon and on the drive back to Raetihi I saw a California Quail running across the road while Nick dozed in the passenger seat.  Just before dark we drove past the still smoking Mount Ruapehu, unfortunately with the top covered in cloud, and continued south towards Wellington, spending the night in the car near Plimmerton.  31 species were recorded with Rifleman and Blue Duck vying for ‘bird of the day’. 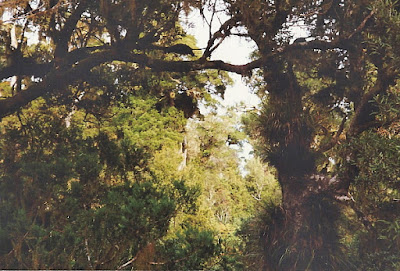 Posted by richard fairbank at 13:03